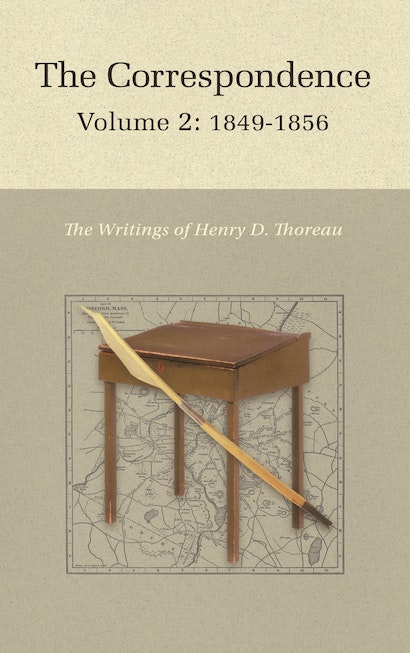 This is the second volume in the first full-scale scholarly edition of Thoreau’s correspondence in more than half a century. When completed, the edition’s three volumes will include every extant letter written or received by Thoreau—in all, almost 650 letters, roughly 150 more than in any previous edition, including dozens that have never before been published.

Correspondence 2 contains 246 letters, 124 written by Thoreau and 122 written to him. Sixty-three are collected here for the first time; of these, forty-three have never before been published. During the period covered by this volume, Thoreau wrote the works that form the foundation of his modern reputation. A number of letters reveal the circumstances surrounding the publication of A Week on the Concord and Merrimack Rivers in May 1849 and Walden in August 1854, as well as the essays “Resistance to Civil Government” (1849; now known as “Civil Disobedience”) and “Slavery in Massachusetts” (1854), and two series, “An Excursion to Canada” (1853) and “Cape Cod” (1855). Writing and lecturing brought Thoreau a small group of devoted fans, most notably Daniel Ricketson, an independently wealthy Quaker and abolitionist who became a faithful correspondent. The most significant body of letters in the volume are those Thoreau wrote to Harrison Gray Otis Blake, a friend and disciple who elicited intense and complex discussions of the philosophical, ethical, and moral issues Thoreau explored throughout his life.

Following every letter, annotations identify correspondents, individuals mentioned, and books quoted, and describe events to which the letters refer. A historical introduction characterizes the letters and connects them with the events of Thoreau’s life, a textual introduction lays out the editorial principles and procedures followed, and a general introduction discusses the history of the publication of Thoreau’s correspondence. Proper names, publications, events, and ideas found in both the letters and the annotations are included in the index, which provides full access to the contents of the volume.

Robert N. Hudspeth is Research Professor of English at the Claremont Graduate University and professor emeritus of English at the University of Redlands. He is the editor of The Letters of Margaret Fuller and the author of Ellery Channing. Elizabeth Hall Witherell is Editor-in-Chief of The Writings of Henry D. Thoreau. Lihong Xie is Associate Textual Editor of The Writings of Henry D. Thoreau.