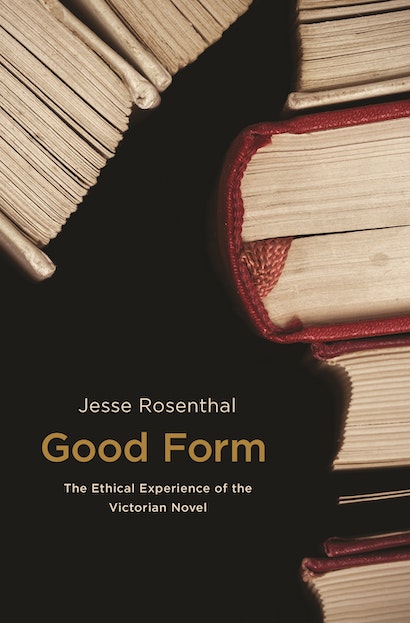 What do we mean when we say that a novel’s conclusion “feels right”? How did feeling, form, and the sense of right and wrong get mixed up, during the nineteenth century, in the experience of reading a novel? Good Form argues that Victorian readers associated the feeling of narrative form—of being pulled forward to a satisfying conclusion—with inner moral experience. Reclaiming the work of a generation of Victorian “intuitionist” philosophers who insisted that true morality consisted in being able to feel or intuit the morally good, Jesse Rosenthal shows that when Victorians discussed the moral dimensions of reading novels, they were also subtly discussing the genre’s formal properties.

For most, Victorian moralizing is one of the period’s least attractive and interesting qualities. But Good Form argues that the moral interpretation of novel experience was essential in the development of the novel form—and that this moral approach is still a fundamental, if unrecognized, part of how we understand novels. Bringing together ideas from philosophy, literary history, and narrative theory, Rosenthal shows that we cannot understand the formal principles of the novel that we have inherited from the nineteenth century without also understanding the moral principles that have come with them. Good Form helps us to understand the way Victorians read, but it also helps us to understand the way we read now.

"Good Form: The Ethical Experience of the Victorian Novel is a major contribution to the study of ethics in realist fiction. Grounded in a masterful command of philosophy and literary theory, and argued through careful readings of Victorian novels, it sheds considerable light on a central topic in fiction studies. It will be vigorously discussed and greatly valued in Victorian studies and narrative studies generally."—John Kucich, Victorian Studies

"This book is itself very good at illuminating matters half-known, pointing out things about the Victorian novel that the reader might already have been aware of, but rendering them newly interesting. . . . In an exhilarating series of conceptual connections, the brilliant final chapter on George Eliot's Daniel Deronda moves from exploring the development of statistics, to the psychology of gambling, to new close readings of Eliot’s narrative complications. . . ."—Kirsty Martin, Times Literary Supplement

"At once familiar and original, brilliant and intuitive, Good Form . . . will inform studies of narrative well beyond the temporal boundaries of the Victorian period."—Jonathan Farina, Wordsworth Circle

"This thoughtful study adds an interesting set of coordinates by which to map Victorian novels as a genre. It recovers a branch of Victorian moral philosophy that has languished under the critique (or neglect) of modernism and post-structuralism and supplies a methodology for examining with fresh theoretical sophistication the very 'readerliness' of those texts that fall on the wrong side of Roland Barthes's 'writerly/readerly' dichotomy. Such reconsideration is over-due, and Rosenthal presents it with admirable erudition."—Sarah Gates, Dickens Quarterly

"Each of the body chapters is rich with rewards of its own. . . . If scholarship consists, as Rosenthal proposes, of an ongoing temporally extended conversation with ‘ourselves,' I was left with no doubt that Rosenthal was one of the selves with whom I would want to speak."—John Plotz, Nineteenth Century Literature

"Jesse Rosenthal's Good Form: The Ethical Experience of the Victorian Novel provides a meticulously researched and original approach to both Victorian literature and novel theory, all the more impressive given that this is the author’s first book. . . . A compelling work of scholarship, one that is sure to be of use to scholars of Victorian literature and culture and novel theory alike."—Isabella Cooper, Studies in the Novel

"Rosenthal enlivens our sense of the possibilities and powers of narrative by arguing that the temporal unfolding of a novel is a moral, philosophical, and ethical matter."—Katherine Voyles, Victorian Review

"A major contribution to the study of ethics in realist fiction. Grounded in a masterful command of philosophy and literary theory, and argued through careful readings of Victorian novels, [Good Form] sheds considerable light on a central topic in fiction studies. It will be vigorously discussed and greatly valued in Victorian studies and narrative studies generally."—John Kucich, Victorian Studies

"A most inspiring and insightful book where he brings up the interconnectedness between moral intuition and the form of the novel—the nineteenth century Victorian novel, to be more specific; but with implications for contemporary literature as well."—Jan Kyrre Berg Friis, Ethical Theory and Moral Practice

"This is one of the best books I've read in a long while—and one of the very best first books I've ever read. Ambitious, highly original, and with wide-ranging implications, it offers persuasive new claims about reading, form, and historicism that are of great interest across literary studies. I expect it to take its place among recent major rethinkings of the nineteenth-century novel."—Caroline Levine, Cornell University