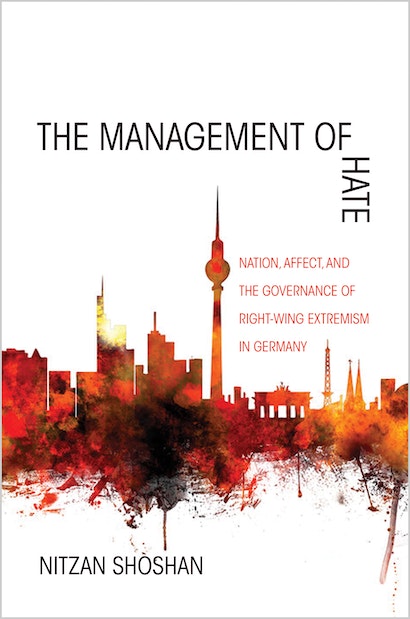 Since German reunification in 1990, there has been widespread concern about marginalized young people who, faced with bleak prospects for their future, have embraced increasingly violent forms of racist nationalism that glorify the country’s Nazi past. The Management of Hate, Nitzan Shoshan’s riveting account of the year and a half he spent with these young right-wing extremists in East Berlin, reveals how they contest contemporary notions of national identity and defy the clichés that others use to represent them.

Shoshan situates them within what he calls the governance of affect, a broad body of discourses and practices aimed at orchestrating their attitudes toward cultural difference—from legal codes and penal norms to rehabilitative techniques and pedagogical strategies. Governance has conventionally been viewed as rational administration, while emotions have ordinarily been conceived of as individual states. Shoshan, however, convincingly questions both assumptions. Instead, he offers a fresh view of governance as pregnant with affect and of hate as publicly mediated and politically administered. Shoshan argues that the state’s policies push these youths into a right-extremist corner instead of integrating them in ways that could curb their nationalist racism. His point is certain to resonate across European and non-European contexts where, amid robust xenophobic nationalisms, hate becomes precisely the object of public dispute.

Powerful and compelling, The Management of Hate provides a rare and disturbing look inside Germany’s right-wing extremist world, and shines critical light on a German nationhood haunted by its own historical contradictions.

Nitzan Shoshan is assistant professor at the Center for Sociological Studies at the Colegio de México in Mexico City.

"As a study of the political self-understanding and everyday lives of young right-wing extremism in the outskirts of the former East Berlin, Shoshan’s study is very much worth reading."—John Abromeit, German Studies Review

"A brave and haunting ethnography of right-wing extremists in Germany that exposes the struggle between licit and illicit modes of nationalism in the soul of liberal democracy. This is a must-read book at a time when Europe is fighting its nationalist demons once again."—Dominic Boyer, Rice University

"In this startlingly original book, Nitzan Shoshan argues that violent, populist forms of nationalism are less an exception than an inherent tendency of modernity and that statecraft is increasingly directed to managing it—especially in Europe after the Cold War. Shoshan's brilliant account of this highly charged drama offers disquieting insight into the increasingly visceral, hate-filled politics of our times."—Jean Comaroff, Harvard University

"A major accomplishment. At every turn, Shoshan wrestles with the question of how the most discredited ideas and sensibilities of the modern era—ideas that yielded the indelible horrors of the twentieth century—have become persuasive, compelling even, in the new century. The Management of Hate is one of the most important books published in the anthropology of Europe in more than a decade."—Douglas R. Holmes, author of Integral Europe: Fast-Capitalism, Multiculturalism, Neofascism

"Bold and original. The Management of Hate is the first book in anthropology to look closely at these milieus of radical Right youth cultures in Berlin, with implications for Germany and Europe in general."—Don Kalb, author of Expanding Class: Power and Everyday Politics in Industrial Communities, The Netherlands, 1850–1950