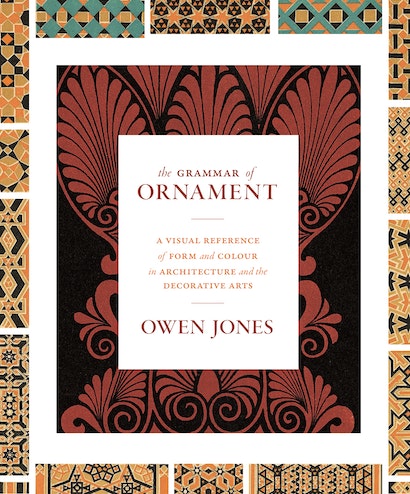 First published in 1856, The Grammar of Ornament remains a design classic. Its inspiration came from pioneering British architect and designer Owen Jones (1809–1874), who produced a comprehensive design treatise for the machine age, lavishly illustrated in vivid chromolithographic color. Jones made detailed observations of decorative arts on his travels in Europe, the Middle East, and in his native London, where he studied objects on display at the Great Exhibition of the Works of Industry of All Nations in 1851 and at local museums. His aim was to improve the quality of Western design by changing the habits of Victorian designers, who indiscriminately mixed elements from a wide variety of sources.

Jones’s resulting study is a comprehensive analysis of styles of ornamental design, presenting key examples ranging from Maori tattoos, Egyptian columns, and Greek borders to Byzantine mosaic, Indian embroidery, and Elizabethan carvings. At once splendidly Victorian and insistently modern, The Grammar of Ornament celebrates objects of beauty from across time periods and continents, and remains an indispensable sourcebook today.

Owen Jones (1809–74) was an English-born Welsh architect and one of the most important design theorists of the nineteenth century. He taught applied arts at the South Kensington School of Design in the 1850s and served as Superintendent of Works at the Great Exhibition of 1851. He was a key figure in the founding of the South Kensington Museum, which later became the Victoria and Albert Museum.

"Architects, design nerds and hard-core antiquarians may be the natural audience for the reissue of this Victorian-era classic. But if you have wondered—as I have—about the subtle differences between the filigrees featured in Persian, Byzantine and Arabian tilework, The Grammar of Ornament: A Visual Reference of Form and Colour in Architecture and the Decorative Arts (Princeton University Press) is a good book to have on hand. . . . The illustrations are delightful, and perhaps surprisingly, it is easy to pick a page at random and find a bit of tasty decorative information to digest. Summer grazing at its best."—Ted Loos, Introspective Magazine

"Wonderful. This reissue of Owen Jones's Grammar of Ornament, unabridged and in full color, will be welcomed by scholars as well as architects and desginers."—Alina Payne, author of From Ornament to Object: Genealogies of Architectural Modernism

"Like the Crystal Palace, for which Jones himself designed the interior color scheme, this book is a riotous cornicopia of hue and form, a heroic attempt to come to grips with the entire world of things. The Grammar of Ornament is an object of beauty in its own right"—Tim Barringer, author of Reading the Pre-Raphaelites