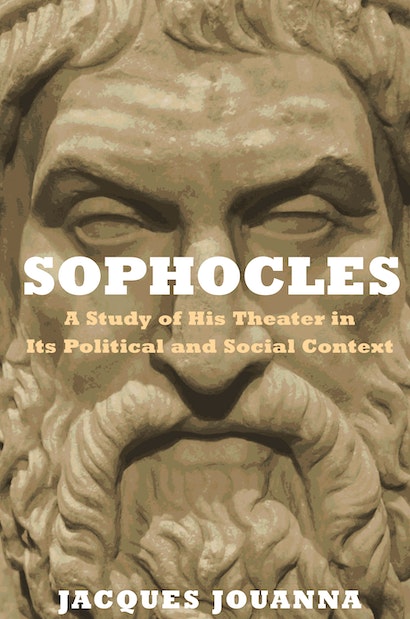 Here, for the first time in English, is celebrated French classicist Jacques Jouanna’s magisterial account of the life and work of Sophocles. Exhaustive and authoritative, this acclaimed book combines biography and detailed studies of Sophocles’ plays, all set in the rich context of classical Greek tragedy and the political, social, religious, and cultural world of Athens’s greatest age, the fifth century.

Sophocles was the commanding figure of his day. The author of Oedipus Rex and Antigone, he was not only the leading dramatist but also a distinguished politician, military commander, and religious figure. And yet the evidence about his life has, until now, been fragmentary.

Reconstructing a lost literary world, Jouanna has finally assembled all the available information, culled from inscriptions, archaeological evidence, and later sources. He also offers a huge range of new interpretations, from his emphasis on the significance of Sophocles’ political and military offices (previously often seen as honorary) to his analysis of Sophocles’ plays in the mythic and literary context of fifth-century drama.

Written for scholars, students, and general readers, this book will interest anyone who wants to know more about Greek drama in general and Sophocles in particular. With an extensive bibliography and useful summaries not only of Sophocles’ extant plays but also, uniquely, of the fragments of plays that have been partially lost, it will be a standard reference in classical studies for years to come.

Jacques Jouanna is a member of the Institut de France and professor emeritus of Greek at the Université de Paris-Sorbonne. His many books include Hippocrates and Greek Medicine from Hippocrates to Galen.

"[Jouanna’s} book will give both classicists and general readers hours of pleasure. It is encyclopaedic, detailed, fascinating, readable and tremendous value for money."—Marion Gibbs, Classics for All

"Regardless of its entanglements with democratic culture, Greek tragedy remains a nebulous, shimmering planet just barely visible to the naked human eye. Immense imagination and enormous erudition seem requisite to approaching the greatness and complexity of Sophocles’ oeuvre. Jouanna has advanced the world’s understanding closer to this elusive goal."—Joel Aiden Schlosser, Polis, The Journal for Ancient Greek and Roman Political Thought (AGPT)

"A formidable achievement that will stand as a definitive landmark. Virtually encyclopedic in its coverage, the book demonstrates magisterial control of the texts and their contexts."—Froma Zeitlin, Princeton University

"A milestone. . . . This undertaking is by far the most rich and the most learned which exists today on this subject. . . . For educated readers and classicists who wish to learn about Sophocles and Greek tragedy, it offers an exceptional panorama, which combines the pleasure of reading with flawless scholarship. For specialists, it offers a new methodological approach, set in historical perspective. . . . It will no longer be possible to study Sophocles or Greek tragedy without referring to this work by Jouanna."—Laurent Pernot, Journal of Hellenic Studies

"Everyone, from students to dedicated fans, will find something to interest them in this learned and wide-ranging book. Jouanna's discussions of whole plays and of individual scenes are invariably thorough, balanced, sensitive, and stimulating; they are also based on scrupulous examination of the sources, backed up by impeccable scholarship. Undergraduates in particular will find this book a valuable resource, since it provides an excellent introduction not just to Sophocles but to fifth-century theatre in general."—Matthew Wright, Classical Review