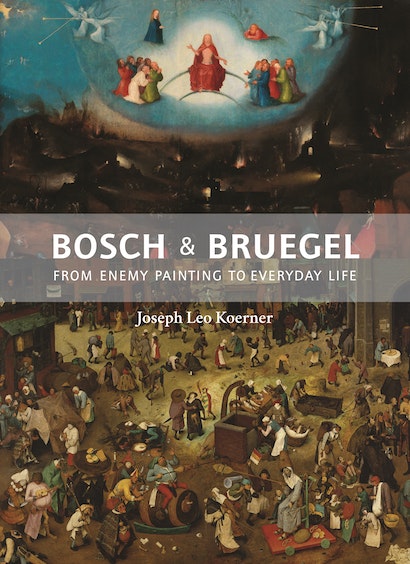 In this visually stunning and much anticipated book, acclaimed art historian Joseph Koerner casts the paintings of Hieronymus Bosch and Pieter Bruegel in a completely new light, revealing how the painting of everyday life was born from what seems its polar opposite: the depiction of an enemy hell-bent on destroying us.

Supreme virtuoso of the bizarre, diabolic, and outlandish, Bosch embodies the phantasmagorical force of painting, while Bruegel, through his true-to-life landscapes and frank depictions of peasants, is the artistic avatar of the familiar and ordinary. But despite their differences, the works of these two artists are closely intertwined. Bruegel began his career imitating Bosch’s fantasies, and it was Bosch who launched almost the whole repertoire of later genre painting. But Bosch depicts everyday life in order to reveal it as an alluring trap set by a metaphysical enemy at war with God, whereas Bruegel shows this enemy to be nothing but a humanly fabricated mask. Attending closely to the visual cunning of these two towering masters, Koerner uncovers art history’s unexplored underside: the image itself as an enemy.

An absorbing study of the dark paradoxes of human creativity, Bosch and Bruegel is also a timely account of how hatred can be converted into tolerance through the agency of art. It takes readers through all the major paintings, drawings, and prints of these two unforgettable artists—including Bosch’s notoriously elusive Garden of Earthly Delights, which forms the core of this historical tour de force. Elegantly written and abundantly illustrated, the book is based on Koerner’s A. W. Mellon Lectures in the Fine Arts, a series given annually at the National Gallery of Art, Washington.

Joseph Leo Koerner is the Victor S. Thomas Professor of the History of Art and Architecture and Senior Fellow of the Society of Fellows at Harvard University. His previous books include The Moment of Self-Portraiture in German Renaissance Art, The Reformation of the Image, and Caspar David Friedrich and the Subject of Landscape. 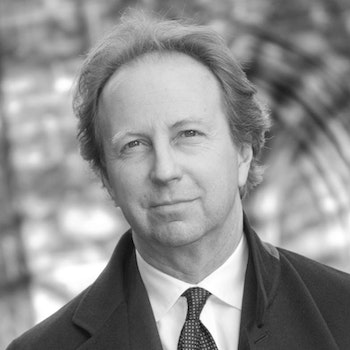 "More gripping than a thriller. . . . A frightening, fascinating study. . . . It is rare, when reading a work of scholarly criticism, to be so gripped as to feel nervous about turning the page. Be warned: there are chapters here more frightening than a thriller because they allow us to see, with Bosch, infinitely multiplying sin. . . . This is a book to read and reread in any moment of doubt about what critical analysis can achieve. Koerner believes that every painting by Bruegel ‘can sustain a lifetime of looking.' He has written a passionately attentive book that brings all life to bear on these pictures, and makes one feel that a lifetime of looking would be well spent."—Alexandra Harris, The Guardian

"[An] eloquent and rich exploration . . . based on Koerner's A.W. Mellon Lectures in the Fine Arts at the National Gallery of Art in Washington, the series of talks seamlessly form a book of linked essays that discuss individual paintings, with magnifying precisions, while simultaneously advancing a broader theory on art in a Europe emerging from its dark ages. . . . [Koerner's] observations bring Bosch's work into relevance today."—Nina Siegal, New York Times Book Review

"A new book by Joseph Koerner is always an event. Here, as usual, he seems to have read everything and to have thought about everything connected with his chosen subject. . . . But it is his ability to look and to find words for what he is looking at that sets him in the very front rank of art historians. . . . A magnificent achievement, with something to arrest and challenge on every one of its 400-plus pages."—Gabriel Josipovici, Times Literary Supplement

"Among the many publications about art I acquired or received, the most important were Bosch and Bruegel: From Enemy Painting to Everyday Life, a long-awaited, provocative study of these two key painters by Harvard art historian Joseph Leo Koerner."—Sebastian Smee, Boston Globe

"This book is a lucid and rewarding read, and lavishly illustrated with 325 reproductions. . . . [Koerner's] use of illustration details from the paintings is particularly effective. . . . Koerner navigates deftly through fraught attributions and interpretative controversies. . . . [His] discussion of Romanesque grotesque sculpture and Bosch’s compelling organic monsters is illuminating. . . . With Koerner, the reader steps into these scenes. . . . Koerner compares analysing Bosch and Bruegel to 'looking for a watershed in marshland', and he does an admirable job of it.""—Tracey Warr, Times Higher Education

"An extremely thoughtful, wide-ranging examination of Hieronymus Bosch (?1450–1516) and Pieter Bruegel (1525–69), who have been considered together almost from their own time, this volume attests to the layers of meaning invested in these artists and to Koerner's erudition."—Choice

"At the intellectual heart of this feast of Bosch scholarship lies, without doubt, Koerner's new study, Bosch and Bruegel: From Enemy Painting to Everyday Life. Here scientific analysis and questions of attribution give way to an erudite and deeply engaging exploration of Bosch, Pieter Bruegel (around 1525–69) and rise of ‘secular painting’ . . . [Koerner] has the ability to present familiar works—often pinned in reproduction to the walls of student dorms—in ways that send shivers down the spine."—Bridget Heal, Art Newspaper

"Those tempted or even terrified by Bosch's work but elevated, in a quiet, incarnational way by Bruegel’s, will now be able to fathom why and how by spending some time with Koerner’s Bosch & Bruegel."—Frank Freeman, Commonweal

"[A] fascinating and lavishly illustrated tome. . . . In his audacious focus on ordinary life, Bruegel stepped out of Europe's medieval past and into modernity. And this book, by shining a laser on the 50 years during which Bruegel developed genre painting, lets readers peek into the Renaissance origins of their own thought world. Seldom has art history seemed so relevant."—Karen Sue Smith, America

"Looking closely at how these two artists drew inspiration from the darker tones of life, namely in the hellish landscapes of the underworld, [Koerner] shows how they managed to bring a more accurate portrayal of peasant life to their art. Readers are compelled to view Bosch, a painter often more known for his depictions of surreal landscapes of hell, as one on par with Pieter Bruegel (1525–90), whose work depicted everyday life. Drawing on decades of research, experience, and an enormous library of illustrations, Koerner takes readers through a carefully guided tour of life in the 16th century."—Library Journal

"Rich and illuminating. . . . Koerner is a brilliant reader of pictures, whose observations, grounded in a lifetime of looking, are animated by a nonchalantly fluent grasp of concepts from aesthetics, philosophy and anthropology. His picking apart of ‘the intricate machinery' of these paintings is magisterial and intensely enjoyable."—Tim Smith-Laing, Literary Review

"This is a strikingly original thesis about the relationship between Bosch and Bruegel, painters who have been repeatedly studied in tandem (Bruegel began his career as a Bosch translator); and Koerner unfolds it as a story of art-historical origins for it is, at the same time, a novel account of the birth of genre painting in European art. . . . [A] resourceful historian, discerning critic, and exceptional prose stylist, Koerner knows how to drive a narrative."—Mitchell B. Merback, Critical Inquiry

"Highly anticipated. . . . Bosch and Bruegel shows, over hundreds of beautifully illustrated, well-footnoted pages, that we ought to dig for the roots of genre painting in the most unlikely of places: the demonic and frantically religious paintings of Hieronymus Bosch."—Will Theiss, Marginalia

"In this book Joseph Koerner returns to the traditional connection between Bosch and Bruegel, but does so in order to demonstrate a much wider argument: namely, that in art by Bosch life is under the eye of God, while in Bruegel's paintings decision, for right or wrong, is human. . . . A wide-ranging and stimulating discussion of the works of these two artists as seen within his overall theme."—Iain Buchanan, The Burlington Magazine

"The most brilliant example that I have encountered recently of truly innovative literary historical thought is a book about painting: Joseph Koerner's Bosch and Bruegel: From Enemy Painting to Everyday Life. . . . Koerner shows what it is like to burrow deeply into enigmatic works of art, to refuse to resolve painful ambiguities, to embrace brilliant description as a theoretical practice."—Stephen Greenblatt, Slovo a Smysl

"Like many of Koerner's earlier books . . . its powerful analyses carry strong conviction. These lectures show prolonged, thoughtful engagement with these artists and their oeuvres. . . . Most will savor the rich commentary initiated by the author, akin to Bruegel's own visual dialogue with viewers of all eras."—Larry Silver, Sixteenth Century Journal

"Reading this account of Koerner's slow and careful observations is a joy. The text expresses an enormous enthusiasm for looking at art and, perhaps even more so, for writing about it."—Matthijs Ilsink, caa.reviews

"Bosch and Bruegel: From Enemy Painting to Everyday Life engages with the two greatest Netherlandish painters of the 16th century and with extraordinary subtlety explores the ways in which the infernal visions of the former could lead to the peerless observation of the real world of the latter."—David Ekserdjian, Evening Standard

"Koerner’s book is certainly different from the recent Bosch studies and, I suspect, will be unique among the forthcomingwritings on Bruegel. He offers a compelling portrait of both masters that is at once a feastof close observation and a wide-ranging intellectual meditation on their art and their culturalenvironments. This dense text demands but richly rewards the patient reader."—Jeffrey Chipps Smith, Renaissance Quarterly

"In this magisterial book, Joseph Koerner explores the role of Bosch and Bruegel in the great early modern shift of the ends of art from theological explanation to time-bound description, from being to picturing. Along the way, he offers a rich account of a newly global culture and a violently contested religious milieu where the status of images was itself an issue of life and death."—Susan Stewart, author of On Longing and The Poet's Freedom: A Notebook on Making

"A tremendous achievement. Koerner is one of the most gifted and intelligent art historians at work anywhere, as well as a remarkably fluent and resourceful stylist capable of presenting extremely subtle and persuasive readings in elegant and simple prose."—Michael Fried, author of The Moment of Caravaggio

"Insightful and encyclopedic. Koerner renders fresh and thought-provoking paintings that have been seen and discussed for centuries."—Keith Moxey, author of Visual Time: The Image in History