How American race law provided a blueprint for Nazi Germany 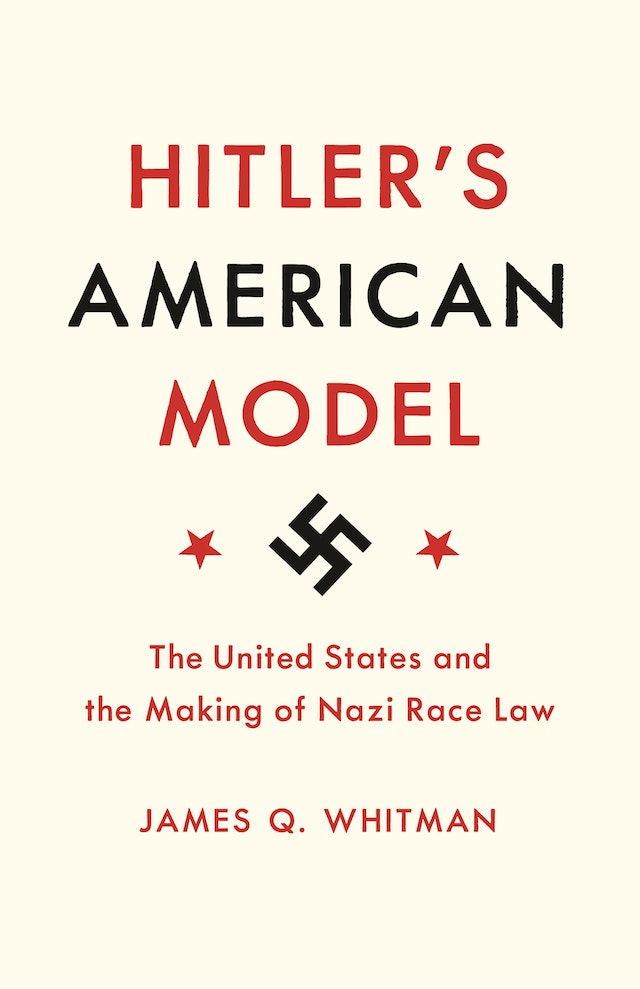 Nazism triumphed in Germany during the high era of Jim Crow laws in the United States. Did the American regime of racial oppression in any way inspire the Nazis? The unsettling answer is yes. In Hitler’s American Model, James Whitman presents a detailed investigation of the American impact on the notorious Nuremberg Laws, the centerpiece anti-Jewish legislation of the Nazi regime. Contrary to those who have insisted that there was no meaningful connection between American and German racial repression, Whitman demonstrates that the Nazis took a real, sustained, significant, and revealing interest in American race policies.

As Whitman shows, the Nuremberg Laws were crafted in an atmosphere of considerable attention to the precedents American race laws had to offer. German praise for American practices, already found in Hitler’s Mein Kampf, was continuous throughout the early 1930s, and the most radical Nazi lawyers were eager advocates of the use of American models. But while Jim Crow segregation was one aspect of American law that appealed to Nazi radicals, it was not the most consequential one. Rather, both American citizenship and antimiscegenation laws proved directly relevant to the two principal Nuremberg Laws—the Citizenship Law and the Blood Law. Whitman looks at the ultimate, ugly irony that when Nazis rejected American practices, it was sometimes not because they found them too enlightened, but too harsh.

James Q. Whitman is the Ford Foundation Professor of Comparative and Foreign Law at Yale Law School. His books include Harsh Justice, The Origins of Reasonable Doubt, and The Verdict of Battle. He lives in New York City.

"Hitler's American Model is a breathtaking excavation of America's shameful contribution to Hitler's genocidal policies. This book is a profound testament to what the past can teach us about the present and is more timely than Whitman could possibly have imagined when he began this remarkable excursion into our nation's original sin and its surprising European legacy. A brilliant page-turner."—Laurence H. Tribe, Harvard Law School

"This is a brilliant, erudite, and disturbing book. By looking at the United States through the eyes of Nazi legal theorists in the 1930s, Whitman contributes to our understanding of this darkest chapter of German legal history. Moreover, he shines a light through this unlikely lens on the worst sins of our own country's past."—Lawrence M. Friedman, author of A History of American Law

"In Hitler's American Model, Whitman tells the deeply troubling story of how Nazi lawyers drew inspiration from the American legal system. He offers a detailed and careful reading of how U.S. immigration laws and antimiscegenation legislation gave the Nazi legal establishment the sense of remaining within the boundaries of respectable jurisprudence. Filled with novel insights, this is a particularly timely book given today's political climate."—Jan T. Gross, author of Neighbors

"This is a critical book for our difficult times. Whitman forces us to see America through Nazi eyes and to realize how profoundly white supremacy has shaped this country. Chilling in its details, the unsettling insights of Hitler's American Model jump from every page. A must-read!"—Eddie S. Glaude, author of Democracy in Black

"This is one of the most engrossing and disturbing pieces of legal history I've read in a long time. Whitman offers a sustained, systematic, and thoughtful look at how Nazi legal theorists and conservative German lawyers drew on American examples when crafting the Nuremberg laws—Germany's contribution to racial madness in the twentieth century. Whitman's book stands apart from, indeed above, everything I've read regarding America's influence on the making of the Nazi state."—Lawrence Powell, Tulane University

"This spellbinding and haunting book shatters claims that American laws related to race and segregation had little to no impact on the shaping of Nazi policies. Whitman's readings of the Nuremberg laws and Nazi legal scholarship are astonishing—nimble, sophisticated, and nuanced. Speaking volumes, this book will change the way we think about Jim Crow, Nazis, and America's role in the world."—Daniel J. Sharfstein, author of The Invisible Line: A Secret History of Race in America