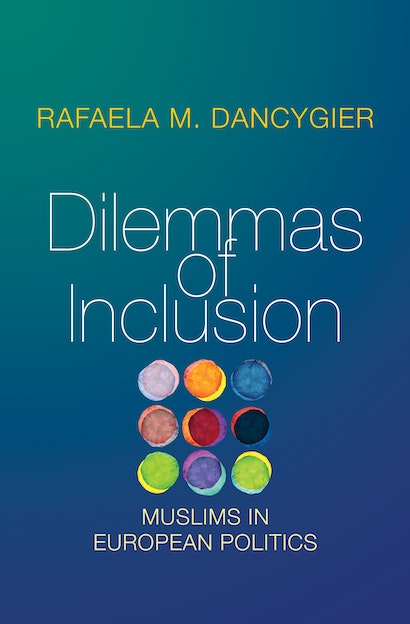 As Europe’s Muslim communities continue to grow, so does their impact on electoral politics and the potential for inclusion dilemmas. In vote-rich enclaves, Muslim views on religion, tradition, and gender roles can deviate sharply from those of the majority electorate, generating severe trade-offs for parties seeking to broaden their coalitions. Dilemmas of Inclusion explains when and why European political parties include Muslim candidates and voters, revealing that the ways in which parties recruit this new electorate can have lasting consequences.

Drawing on original evidence from thousands of electoral contests in Austria, Belgium, Germany, and Great Britain, Rafaela Dancygier sheds new light on when minority recruitment will match up with existing party positions and uphold electoral alignments and when it will undermine party brands and shake up party systems. She demonstrates that when parties are seduced by the quick delivery of ethno-religious bloc votes, they undercut their ideological coherence, fail to establish programmatic linkages with Muslim voters, and miss their opportunity to build cross-ethnic, class-based coalitions. Dancygier highlights how the politics of minority inclusion can become a testing ground for parties, showing just how far their commitments to equality and diversity will take them when push comes to electoral shove.

Providing a unified theoretical framework for understanding the causes and consequences of minority political incorporation, and especially as these pertain to European Muslim populations, Dilemmas of Inclusion advances our knowledge about how ethnic and religious diversity reshapes domestic politics in today’s democracies.

Rafaela M. Dancygier is associate professor of politics and international affairs at Princeton University. She is the author of Immigration and Conflict in Europe.

"With a sophisticated analysis of thousands of elections in Austria, Belgium, Germany, and the United Kingdom, [Rafaela Dancygier] shows that European political parties have been ruthlessly pragmatic in attracting Muslim votes."—Andrew Moravcsik, Foreign Affairs

"Rafaela Dancygier’s Dilemmas of Inclusion asks political scientists to take the idea of vote-maximizing parties seriously once again. . . . Dancygier provides extensive and convincing evidence for the idea that electoral incentives are the best explanation for cross-national and within-country variation in parties’ inclusion of Muslim minorities, both in who they nominate and how they promote their candidates."—Colin Brown, EuropeNow

"This book is a most welcome addition to the social science literature on contemporary European politics specifically, and minority political representation in electoral politics generally. In terms of political responsibility, it aptly shiftsthe blame away from European Muslims."—Fatma Muge Gocek, Social Forces

"Dilemmas of Inclusion brilliantly weaves a tapestry of electoral competition in Western Europe amid a rising tide of Muslim voters. Exposing the challenge of the political Left, Dancygier shows how the Left's ideological foundations begin to crumble when they seek to attract voters who reject liberal social commitments to gender equality. Filled with stories, data, and empathy, this is a book that illuminates one of the great dilemmas of Western democratic development."—David D. Laitin, Stanford University

"Dancygier offers a compelling account of the dilemmas European parties face as they struggle to incorporate Muslim minorities that challenge their ideology. Combining rigorous empirical investigations with theoretical insight, she eloquently shows how electoral concerns dominate party strategies of inclusion, with implications for electoral coalitions and volatility and the political representation of women."—Claire L. Adida, coauthor of Why Muslim Integration Fails in Christian-Heritage Societies

"What a timely, prescient book! Dancygier argues that above all, the political inclusion of Muslim candidates is a numbers game of vote maximization, with party ideology or multicultural ideals secondary. This carries unsettling consequences for women's representation and Left parties’ platforms. A must-read for anyone seeking to understand the volatility of contemporary politics."—Irene Bloemraad, University of California, Berkeley

"This is a major work. Dancygier brings out a poignant paradox. Mobilization of Muslim voters reinforces the power of imams and the mosque in Muslim communities. The result puts political parties, particularly on the Left, in a bind. On the one side, their core constituencies are committed to a cosmopolitan, egalitarian outlook; on the other, religious leaders of Muslim communities are committed to patriarchal, restrictive values."—Paul Sniderman, Stanford University

"Dilemmas of Inclusion makes an outstanding contribution to understanding the political incorporation of Muslims in Europe. Dancygier's empirical research is compelling, quite meticulous, and very informative. Her excellent book will be very widely read."—Thad Dunning, University of California, Berkeley