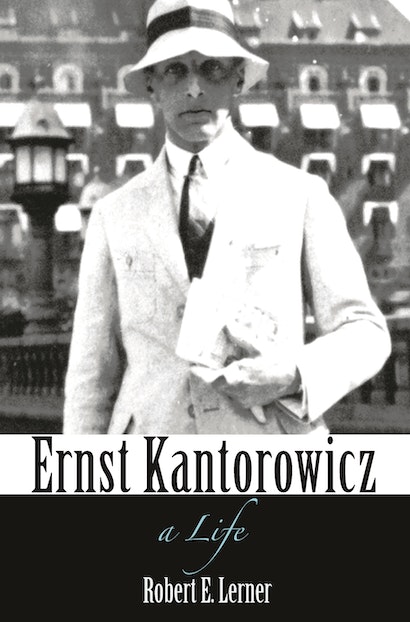 This is the first complete biography of Ernst Kantorowicz (1895–1963), an influential and controversial German-American intellectual whose colorful and dramatic life intersected with many of the great events and thinkers of his time. A medieval historian whose ideas exerted an influence far beyond his field, he is most famous for two books—a notoriously nationalistic 1927 biography of the Holy Roman Emperor Frederick II and The King’s Two Bodies (1957), a classic study of medieval politics.

Born into a wealthy Prussian-Jewish family, Kantorowicz fought on the Western Front in World War I, was wounded at Verdun, and earned an Iron Cross; later, he earned an Iron Crescent for service in Anatolia before an affair with a general’s mistress led to Kantorowicz being sent home. After the war, he fought against Poles in his native Posen, Spartacists in Berlin, and communists in Munich. An ardent German nationalist during the Weimar period, Kantorowicz became a member of the elitist Stefan George circle, which nurtured a cult of the “Secret Germany.” Yet as a professor in Frankfurt after the Nazis came to power, Kantorowicz bravely spoke out against the regime before an overflowing crowd. Narrowly avoiding arrest after Kristallnacht, he fled to England and then the United States, where he joined the faculty at Berkeley, only to be fired in 1950 for refusing to sign an anticommunist “loyalty oath.” From there, he “fell up the ladder” to Princeton’s Institute for Advanced Study, where he stayed until his death.

Robert E. Lerner is professor emeritus of history at Northwestern University, where he taught medieval history for more than forty years. The author of many books, he is a fellow of the Medieval Academy of America and the American Academy in Rome, and a former member of the Institute for Advanced Study in Princeton.

"A richly illuminating study . . . [and] a timely meditation on the vicissitudes of abstract, purist ideals under the pressure of savage real-world events."—George Prochnik, New York Times Book Review

"A labour of love inspired by youthful sightings of its charismatic subject. . . . Lerner's admirable study suggests that our understanding of the mind of the 20th century might be enriched by looking back at Kantorowicz’s brilliant, if recondite scholarship, alongside this tribute to its author."—Stoddard Martin, Jewish Chronicle

"Lerner's accessible, conversational tone and deft use of quotation bring Kantorowicz to life, showing the man behind the scholar and the development of a brilliant mind over a lifetime. Throughout, Kantorowicz’s voice is sharply present. Lerner admits that, posthumously, motivations are impossible to discern, but his discernment is a gift in this unflinching treatment of Kantorowicz’s legacy."—Letitia Montgomery-Rodgers, Foreword

"[Robert Lerner] sets Kantorowicz in the context of his time, uniting heroic archival research, including numerous interviews with Kantorowicz's associates and friends, with discerning judgments to trace his remarkable odyssey. The result is a valuable contribution to modern European and American intellectual history."—Jacob Heilbrunn, The National Interest

"The extraordinary story of Kantorowicz's passage from Posen to Princeton via California is admirably told by Robert E. Lerner, and he has undoubtedly written the biography of record."—Hamish Robinson, The Oldie

"Lerner's biography is worthy of great praise, and it is very unlikely that it will ever be superseded."—Walter Laqueur, Jewish Review of Books

"A lively and authoritative text, which should endear Kantorowicz to many historians of the present day. . . . Ernst Kantorowicz: A Life is a deeply informed and profoundly considered work that should take its place proudly among the other biographies of notable figures brought out by Princeton University Press."—BookPleasures.com

"Compelling. . . . A major success. . . . It is heartily recommended not only to medievalists interested in how Kantorowicz shaped our field, but also to those working in German and German American studies as well as scholars of the history of ideas, politics, Jewish life, universities, and more."—Lezlie Knox, H-Net Reviews

"Lerner adds much to our understanding of Kantorowicz’s works, and these intellectual history aspects of the biography are its greatest strength."—Jonathan R. Lyon, German History

"There is much in the biography that is superb—the opulence of detail, the thumbnail sketches of those involved in Kantorowicz’s life, the marvelous analysis of several of Kantorowicz’s writings, the capsule contextualizations of historical moments such as the loyalty oath controversy in Berkeley, and above all the way it portrays the cross-cultural tapestry of intellectual life in the first half of the twentieth century. This is a beautiful book and a major contribution."—Richard Hyland, The American Journal of Comparative Law

"Lerner’s biography is a magnificent achievement. His book is bound to be not only the definitive study of Kantorowicz’s life but also a major contribution to the growing literature on Kantorowicz’s work."—Joseph Mali, European Legacy

"[This book's] value is beyond question."—Martin Woessner, American Historical Review

"Ernst Kantorowicz was a magical figure who captivated everyone around him. This biography takes his measure and casts a spell of its own. Emerging from deep within the archives, Robert Lerner shows us precisely how Kantorowicz worked his magic, first in interwar Germany and then again as an émigré in the United States. This book is also a memoir, preserving precious chains of lore and reminiscence: an inspired labor of love."—Conrad Leyser, University of Oxford

"With forensic archival sense and the sympathies of a subtle historian, Robert Lerner tells the story of a remarkable life against the volatile history of twentieth-century Europe and America. Ernst Kantorowicz: A Life traces the making of the scion of a bourgeois Jewish family into a patriotic soldier, a nationalist intellectual, a refugee, and finally a critic of the Cold War. His life made Eka—as he styled himself—into a most original historian who explored the making of political authority and charisma in the classic The King's Two Bodies. Lerner has written a highly readable and illuminating account of living in extraordinary times."—Miri Rubin, Queen Mary, University of London

"This amazing biography of Ernst Kantorowicz is the product of a prodigious amount of research undertaken over the past twenty-five years. There is nothing else like this anywhere. Robert Lerner has uncovered materials that I suspect are known to very few others."—John Van Engen, University of Notre Dame

"Ernst Kantorowicz, one of the most interesting and influential historians of the twentieth century, has found his ideal biographer in Robert Lerner, who as a medievalist is well versed in the many branches of Kantorowicz's scholarship. Drawing on unique sources, including important collections of unpublished letters and interviews with people who knew Kantorowicz, Lerner presents a lively, vivid picture of the historian's life and writings."—Eckhart Grünewald, author of Ernst Kantorowicz and Stefan George