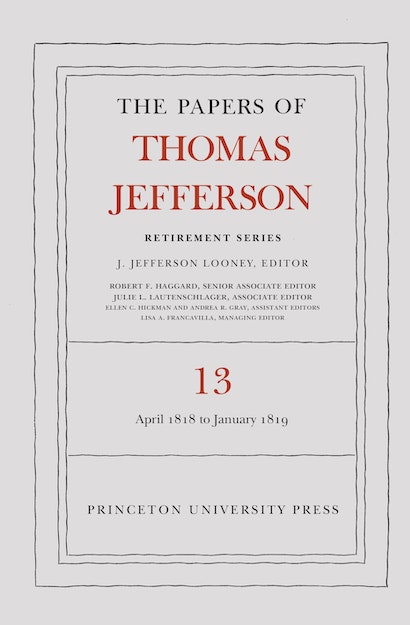 This volume’s 598 documents span 22 April 1818 to 31 January 1819. Jefferson spends months preparing for a meeting to choose the site of the state university. He drafts the Rockfish Gap Report recommending the location of the University of Virginia at Charlottesville as well as legislation confirming this decision. Jefferson travels to Warm Springs to cure his rheumatism but instead contracts a painful infection on his buttocks. His enforced absence from Poplar Forest leads to detailed correspondence with plantation manager Joel Yancey. A work that Jefferson helped translate, Destutt de Tracy’s Treatise on Political Economy, is finally published. Salma Hale visits Monticello and describes Jefferson’s views on food, wine, and religion. In acknowledging an oration by Mordecai M. Noah, Jefferson remarks that the suffering of members of the Jewish faith “has furnished a remarkable proof of the universal spirit of religious intolerance.” He receives long discussions of occult science and the nature of light by Robert Miller and Gabriel Crane. Abigail Adams dies, and Jefferson assures John Adams that their own demise will result in “an ecstatic meeting with the friends we have loved & lost and whom we shall still love and never lose again.”

"The series has been rightly garlanded with praise for its ambition, its production values, its scholarly apparatus and the staggering erudition displayed in its editorial annotations. The current volume more than maintains standards."—Peter Thompson, Resources for Early American Studies