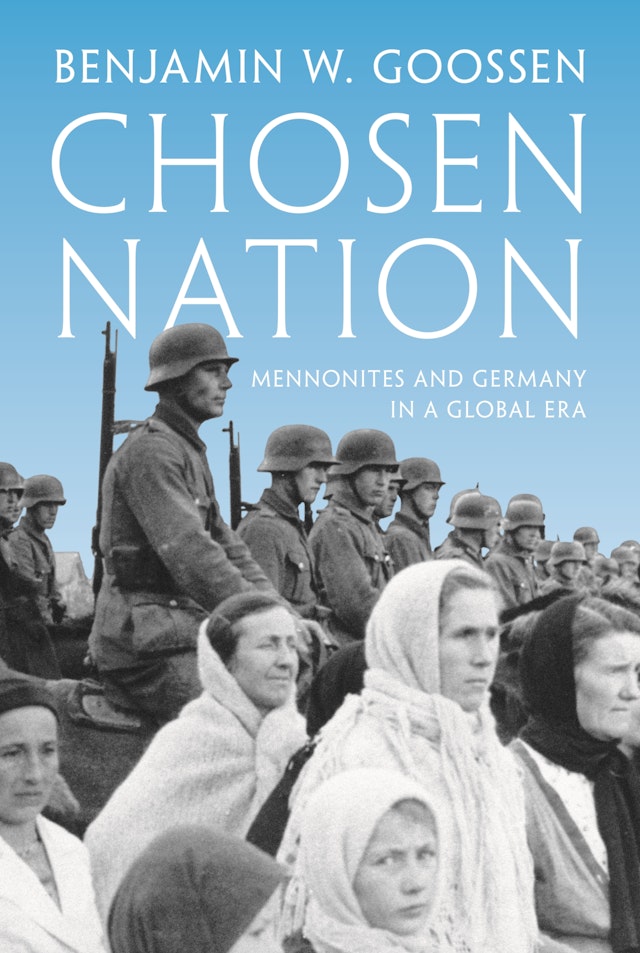 During the nineteenth and twentieth centuries, the global Mennonite church developed an uneasy relationship with Germany. Despite the religion’s origins in the Swiss and Dutch Reformation, as well as its longstanding pacifism, tens of thousands of members embraced militarist German nationalism. Chosen Nation is a sweeping history of this encounter and the debates it sparked among parliaments, dictatorships, and congregations across Eurasia and the Americas.

Offering a multifaceted perspective on nationalism’s emergence in Europe and around the world, Benjamin Goossen demonstrates how Mennonites’ nationalization reflected and reshaped their faith convictions. While some church leaders modified German identity along Mennonite lines, others appropriated nationalism wholesale, advocating a specifically Mennonite version of nationhood. Examining sources from Poland to Paraguay, Goossen shows how patriotic loyalties rose and fell with religious affiliation. Individuals might claim to be German at one moment but Mennonite the next. Some external parties encouraged separatism, as when the Weimar Republic helped establish an autonomous “Mennonite State” in Latin America. Still others treated Mennonites as quintessentially German; under Hitler’s Third Reich, entire colonies benefited from racial warfare and genocide in Nazi-occupied Ukraine. Whether choosing Germany as a national homeland or identifying as a chosen people, called and elected by God, Mennonites committed to collective action in ways that were intricate, fluid, and always surprising.

The first book to place Christianity and diaspora at the heart of nationality studies, Chosen Nation illuminates the rising religious nationalism of our own age.

Benjamin W. Goossen is a scholar of global religious history at Harvard University.

"If you associate Mennonites not only with belief in adult baptism but also with pacifism, with refusing to take oaths, and with proper distance from politics, then this richly documented book shatters all of your illusions."—Hartmut Lehmann, American Historical Review

"A notable, original contribution to the history of religion in modern Germany, Chosen Nation also succeeds brilliantly as an extended reflection on the very nature of personal identity in the context of complex cultural, social and political environments. On both accounts it merits a wide readership."—Anthony J. Steinhoff, Journal of Ecclesiastical History

"Goossen’s book is an impressively researched and engaging study. . . . It skilfully combines transnational, social and cultural approaches to produce a work which unites the revival of historiographical interest in the place of religion in the modern world with the analytical possibilities opened up by global history."—Thomas Brodie, English Historical Review

"Where the mastery of this study lies . . . is in Goossen’s detailed retelling of how a community—or at least one part of it—once identified by its pacifism became the poster child for Nazi racial ideology, a development that was not without the active participation of German Mennonites themselves in both the creation of this vision and the crimes it elicited."—Rebecca Bennette, German History

"[C]arrying the narrative forward in a manner that is rich in detail but simultaneously a compelling story. . . . Chosen Nation is a wonderful resource in the study of how a religious community can struggle to maintain its principles in the face of political and other social pressures."—George Adams, Nova Religio

"A breakthrough book that addresses a vital topic of interest in great detail. . . . It has the potential to rekindle old conversations about the crises and fatigues of identity in religious communities, given that history is a major source of insight and direction for those communities, and for this reason—in addition to its historical research—it is an impressive and illuminating work."—Maxwell Kennel, Reading Religion

"Rejecting traditional definitions of religion and nationality, Goossen depicts Mennonites as a socially constructed and historically situated collectivity. . . . The result is a thought-provoking examination of Mennonite identity centred on Mennonites’ fluid relationship with Germany from the time of nineteenth-century nationalism and political unification to the present."—Kyle Jantzen, Contemporary Church History Quarterly

"Goossen is an engaging guide through difficult material. His voice joins the calls by other historians . . . to talk about racism in their churches in open and honest ways. One hopes that churches can continue the same difficult scholarship and reflection."—Troy Osborne, Mennonite World Review

"Central to Goossen’s thesis is the inherent instability, or, more positively, pliability of identity and how identity gets shaped by the sociopolitical forces of a given time and place. . . . Inasmuch as Mennonites have offered a glass of water in Christ’s name, Mennonites have also played a part in the worst of human judgments. The integrity of a future Mennonite witness may depend on the church’s ability to account for both."—David Driedger, Anabaptist Witness

"Goossen’s strong narrative produces an engaging read. He asks relevant and sophisticated questions that challenge depictions of Mennonite global connections as having been forged under benign circumstances. . . . This book is a significant scholarly contribution that will inspire debates for many years to come."—Aileen Friesen, Mennonite Life

"Goossen has provided valuable insight into how select Mennonite progressive 'leaders' in the German lands responded to German unification, and how they worked to transform their confession up to and after World War I."—Leonard G. Friesen, Slavic Review

"Chosen Nation . . . deftly unpacks the complex intersections between religion and nation but recognises the fluidity of identity . . . Goossen reminds readers that the ideologies of collectives are constantly in flux and subject to competing interpretations."—Katherine Williams, Nations and Nationalism

"Chosen Nation is a remarkable exploration of the entangled histories of nationalism, race, and religion since the nineteenth century. Goossen tells the story of how Mennonites came to think of themselves as a German diasporic community in concert with the construction of the German nation. Based on stunning archival research, this is a beautifully written book."—Tara Zahra, author of The Great Departure: Mass Migration from Eastern Europe and the Making of the Free World

"This is a fascinating, deeply researched account of a transnational religious group's encounter with modern German nationalism and its ongoing reinvention as an ethnicity, nation, race, and confession. Presenting a new unflinching scholarly voice from within the Mennonite community, Chosen Nation explains and reflects on the origins and consequences of the disastrous mid-twentieth-century Mennonite attraction to German nationalism, acceptance of Nazi racial ideology, and, in some cases, participation in genocide."—Terry Martin, Harvard University

"Chosen Nation is a tour de force. In crystalline prose, Goossen argues that Mennonite and German identities were never stable, but created over time and deployed in specific historical circumstances, with the Mennonite articles of faith in tension with yet often supporting the modern nation-state—even during the Nazi period. This is an eye-opening guide to the vexed history of German Mennonites in the modern era."—Helmut Walser Smith, Vanderbilt University

"In this age of globally resurgent nationalism, Goossen delivers a timely reminder of the malleability and ever-shifting nature of such ideological collectives. His brilliant analysis takes us through two hundred years of Mennonite history and to a vast array of places—from Kazakhstan to Paraguay, from Germany to Canada—to show how religious and national identities emerge, intersect, and shift, often with lightning speed. This book is an important contribution to the thriving field of global history and to the politics of our times."—Sven Beckert, author of Empire of Cotton: A Global History

"Developing a historical narrative of German Mennonites that runs through the age of high nationalism and into the present, Chosen Nation shows how some Mennonites found ways of accommodating the antagonistic positions of religious allegiance and loyalty to country. This is an important book."—H. Glenn Penny, University of Iowa

"What is so impressive about Chosen Nation is how it demonstrates that the history of a small, very unusual, and rather marginal religious group, the Mennonites, illuminates crucial themes in the development of Germany, Europe, and the modern world."—Jonathan Sperber, author of Karl Marx: A Nineteenth-Century Life

"This fine book sheds light on the integration of the Mennonites into German society as part of the construction of German nationalism in the twentieth century. Goossen's use of government archival sources for Mennonite activity during World War II is groundbreaking and his assessment of Mennonite proximity to and involvement in the Holocaust is a significant achievement."—Mark Jantzen, Bethel College