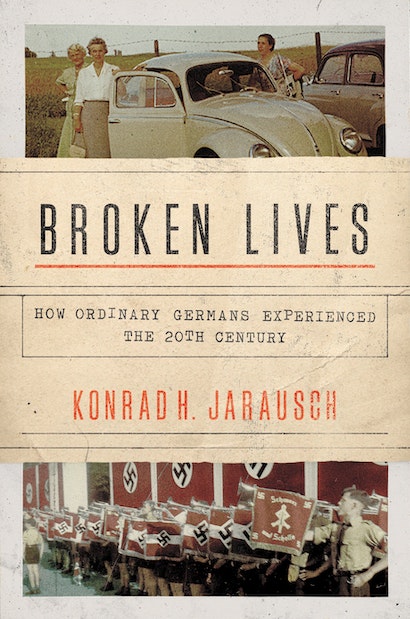 Broken Lives is a gripping account of the twentieth century as seen through the eyes of ordinary Germans who came of age under Hitler and whose lives were scarred and sometimes destroyed by what they saw and did.

Drawing on six dozen memoirs by the generation of Germans born in the 1920s, Konrad Jarausch chronicles the unforgettable stories of people who not only lived through the Third Reich, World War II, the Holocaust, and Cold War partition, but also participated in Germany’s astonishing postwar recovery, reunification, and rehabilitation. Written decades after the events, these testimonies, many of them unpublished, look back on the mistakes of young people caught up in the Nazi movement. In many, early enthusiasm turns to deep disillusionment as the price of complicity with a brutal dictatorship — fighting at the front, aerial bombardment at home, murder in the concentration camps—becomes clear.

Bringing together the voices of men and women, perpetrators and victims, Broken Lives reveals the intimate human details of historical events and offers new insights about persistent questions. Why did so many Germans support Hitler through years of wartime sacrifice and Nazi inhumanity? How did they finally distance themselves from this racist dictatorship and come to embrace human rights? Jarausch argues that this generation’s focus on its own suffering, often maligned by historians, ultimately led to a more critical understanding of national identity—one that helped transform Germany from a military aggressor into a pillar of European democracy.

The result is a powerful account of the everyday experiences and troubling memories of average Germans who journeyed into, through, and out of the abyss of a dark century.

Konrad H. Jarausch is the Lurcy Professor of European Civilization at the University of North Carolina, Chapel Hill. His many books include Out of Ashes: A New History of Europe in the Twentieth Century and Reluctant Accomplice: A Wehrmacht Soldier's Letters from the Eastern Front (both Princeton). He lives in Chapel Hill and Berlin.

"A revealing study of the lives of ‘ordinary Germans’ under the Third Reich and its aftermath. . . . A provocative addition to a vast literature: Jarausch's history complicates our understanding of German society during the early decades of the 20th century."—Kirkus

"It’s a wide-ranging, panoramic, revealing treatment, and for the most part, it’s very dark. . . . For those who seek to understand the German experience in the twentieth century, Jarausch has done a tremendous service."—Cass R. Sunstein, New York Review of Books

"Well written, well researched, and analytical, this publication provides considerable insight into comprehending how it is possible for a phoenix to rise from the ashes and how resilience can be a national virtue."—Stuart McClung, New York Journal of Books

"Jarausch is a class act as a researcher. Every pronouncement is carefully weighed and underpinned with evidence. His thorough, considered approach epitomises social history at its very best. . . . Through the medium of memoirs, Broken Lives offers an explanation for Germany’s dramatic reversal of fortunes from catastrophe to civility."—Hester Vaizey, Times Higher Education

"Jarausch’s steady technique gives the story continuity, as he traces the experiences of . . . young people coping with their inclusion into Nazi life."—Jonathan Steinberg, The Spectator

"Broken Lives . . . shows how World War I defeat did not lead to repentance in a country that had become theologically liberal or atheistic, but plans for revenge. For several years ordinary non-Jewish Germans rode high and thrilled to accounts of military victory, but their comeuppance was severe. All Germans suffered for a decade starting in 1942, and for those in the east torment lasted for nearly a half-century."—Marvin Olasky, World (25 Good History Reads)

"How did Germans who witnessed the worst of the Third Reich and the best of postwar Germany try to understand their own pasts? In Broken Lives, distinguished historian Konrad Jarausch answers this question by exploring scores of memoirs of the Weimar generation, Germans born in the 1920s. Along the way, he also insightfully analyzes the complex process of recording memories of past events."—Norman M. Naimark, author of Genocide: A World History

"With great skill, Konrad Jarausch weaves together the recollections of Germans born between the end of the First World War and Hitler’s rise to power, in order to create a powerful account of generational memory and experience. This is a history of breaks, ruptures, and self-transformations, told with real historical empathy."—Nicholas Stargardt, author of The German War: A Nation under Arms, 1939-1945

"Jarausch illuminates the possibilities of history and consciousness through the testimony of dozens of Germans who struggled to make sense of their lives and the times they lived in. A very moving account of twentieth-century German history."—Peter Fritzsche, author of An Iron Wind: Europe under Hitler

"By focusing on Germans born in the 1920s, Jarausch leads us to think deeply about the ways people experience the intersection of big historical events and their own lives. This book is a tremendous accomplishment—comprehensive and learned, yet down-to-earth and a good read."—Elizabeth Heineman, University of Iowa