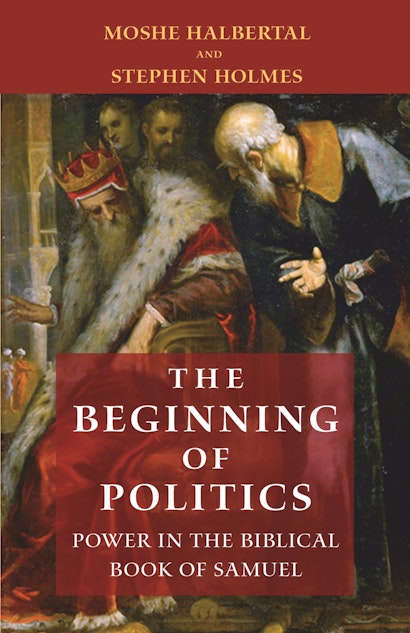 The Book of Samuel is universally acknowledged as one of the supreme achievements of biblical literature. Yet the book’s anonymous author was more than an inspired storyteller. The author was also an uncannily astute observer of political life and the moral compromises and contradictions that the struggle for power inevitably entails. The Beginning of Politics mines the story of Israel’s first two kings to unearth a natural history of power, providing a forceful new reading of what is arguably the first and greatest work of Western political thought.

Moshe Halbertal and Stephen Holmes show how the beautifully crafted narratives of Saul and David cut to the core of politics, exploring themes that resonate wherever political power is at stake. Through stories such as Saul’s madness, David’s murder of Uriah, the rape of Tamar, and the rebellion of Absalom, the book’s author deepens our understanding not only of the necessity of sovereign rule but also of its costs—to the people it is intended to protect and to those who wield it. What emerges from the meticulous analysis of these narratives includes such themes as the corrosive grip of power on those who hold and compete for power; the ways in which political violence unleashed by the sovereign on his own subjects is rooted in the paranoia of the isolated ruler and the deniability fostered by hierarchical action through proxies; and the intensity with which the tragic conflict between political loyalty and family loyalty explodes when the ruler’s bloodline is made into the guarantor of the all-important continuity of sovereign power.

The Beginning of Politics is a timely meditation on the dark side of sovereign power and the enduring dilemmas of statecraft.

"Although an investigation of political power in Old Testament writings might be useful in squaring certain passages, the real value here is exploring these books as a first look into the dynamics of early politics."—Library Journal

"The real value here is exploring these books as a first look into the dynamics of early politics."—Library Journal

"In their brilliant book, The Beginning of Politics, Moshe Halbertal and Stephen Holmes look at Saul, sitting on the heights of power, holding the spear which he has twice used to try and kill David (see I Sam 18:10-12 and 19:9-10)."—Brent Chaim Spodek, The Times of Israel

"[The authors] convincingly demonstrate that the anonymous author of the Book of Samuel offers a wide range of penetrating political insights. . . . This is a superb study of a superb book."—Shmuel Ben-Gad, Association of Jewish Libraries Reviews

"A fascinating interpretation."—John Fea, The Way of Improvement

"A fresh and engaging examination of the book of Samuel. Halbertal and Holmes present original insights. . . . The book is a stimulating read for specialists yet still accessible enough for a semi-popular audience."—Erin E. Fleming, Hebrew Studies

"Though the biblical narrative of Saul and David has been the subject of much literary analysis, Moshe Halbertal and Stephen Holmes illuminate it in a fresh way through their focus on politics. They make a persuasive case that the biblical writer evinces probing insight into the consequences of the pursuit of power, insight that is still relevant to the political constellations of our own era."—Robert Alter, author of Strong as Death Is Love: The Song of Songs, Ruth, Esther, Jonah, and Daniel, a Translation with Commentary

"The Beginning of Politics is an unprecedented feat that contributes to biblical scholarship as well as our understanding of politics in general. In particular, in their brilliant unraveling of the relations among David, Uriah, and Joab, Halbertal and Holmes show how the calculations of political rulers may be thwarted by their attempts to hide their intentions and by chains of obedience and violence that escape the control of their initiators."—Jon Elster, Columbia University

"Truly remarkable. The greatness of the Book of Samuel is due in part to its matchless account of politics and political psychology, and there is no better book to bring this account to light than this one."—Avishai Margalit, Hebrew University of Jerusalem

"By treating the author of Samuel as an ancient Machiavelli, Halbertal and Holmes enable readers to approach the biblical story in a new way while enhancing their understanding of the workings of political survival and the dynamics of power."—Steven Weitzman, author of Solomon: The Lure of Wisdom

"For Halbertal and Holmes, the author of Samuel is a writer of singular political insight, a brilliant student of politics, and indeed, a political theorist avant la lettre. This is a wonderful discovery. The Beginning of Politics is a work of deep and original scholarship."—Michael Walzer, author of In God's Shadow: Politics in the Hebrew Bible