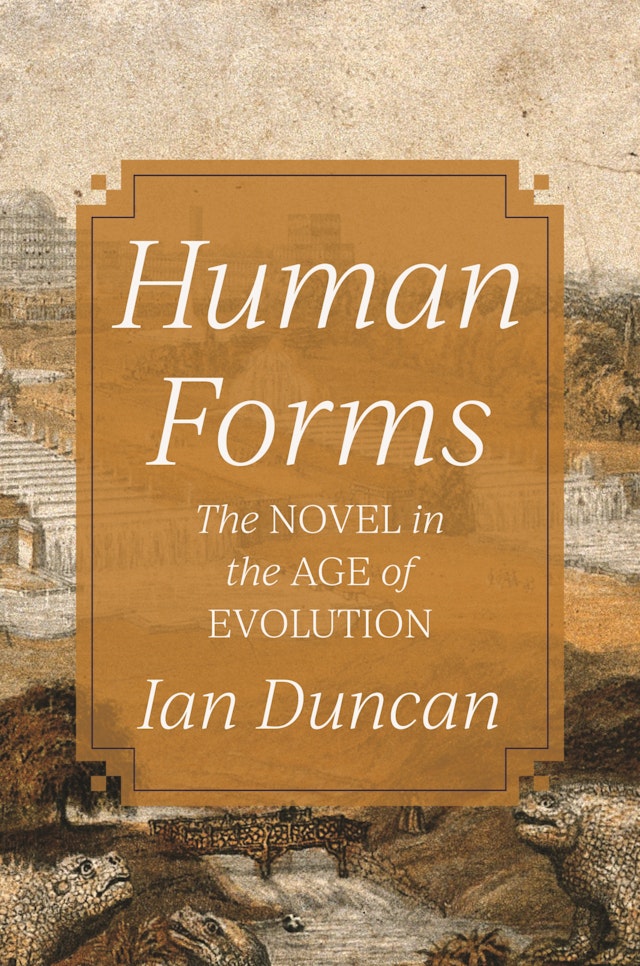 The 120 years between Henry Fielding’s Tom Jones (1749) and George Eliot’s Middlemarch (1871) marked both the rise of the novel and the shift from the presumption of a stable, universal human nature to one that changes over time. In Human Forms, Ian Duncan reorients our understanding of the novel’s formation during its cultural ascendancy, arguing that fiction produced new knowledge in a period characterized by the interplay between literary and scientific discourses—even as the two were separating into distinct domains.

Duncan focuses on several crisis points: the contentious formation of a natural history of the human species in the late Enlightenment; the emergence of new genres such as the Romantic bildungsroman; historical novels by Walter Scott and Victor Hugo that confronted the dissolution of the idea of a fixed human nature; Charles Dickens’s transformist aesthetic and its challenge to Victorian realism; and George Eliot’s reckoning with the nineteenth-century revolutions in the human and natural sciences. Modeling the modern scientific conception of a developmental human nature, the novel became a major experimental instrument for managing the new set of divisions—between nature and history, individual and species, human and biological life—that replaced the ancient schism between animal body and immortal soul.

The first book to explore the interaction of European fiction with “the natural history of man” from the late Enlightenment through the mid-Victorian era, Human Forms sets a new standard for work on natural history and the novel.

Ian Duncan is professor and Florence Green Bixby Chair in English at the University of California, Berkeley. His books include Scott's Shadow: The Novel in Romantic Edinburgh (Princeton).

"Duncan’s study is a wide ranging, superbly researched and brilliantly written account of the ways in which the history of the novel is interwoven with the emergence of the new discourse of ‘natural'history, and its logic of an organic transformation of forms and kinds.’ . . . . Human Forms is a rich and brilliant examination of the complex dynamics between the history of scientific ideas and the development of the novel and, as such, will be invaluable to all those interested in Victorian fiction."—Iain Crawford, Dickens Quarterly

"Human Forms is a virtuoso performance on how, over the course of a century, two very different ways of thinking about the gap between the history of man as an individual and the history of the human species transformed each other. Beautifully written and impeccably researched, this book belongs in the mainstream of novel studies."—Nancy Armstrong, Duke University

"This is a very important and original contribution to our understanding of the nineteenth-century novel—indeed, of the history of the novel in general. I can think of no study that has done more to illuminate the genre's development by bringing the history of science to bear on it."—Simon During, University of Melbourne

"Drawing masterfully on philosophical, scientific, aesthetic, and political discourses on human nature since the Enlightenment, Human Forms reshapes our understanding of the purpose and limit of fictional realism, along with those of its coemergent alternatives. We will be profiting from this book for a long time to come. A tremendous achievement."—James Buzard, Massachusetts Institute of Technology