How human language evolved from the need for social communication 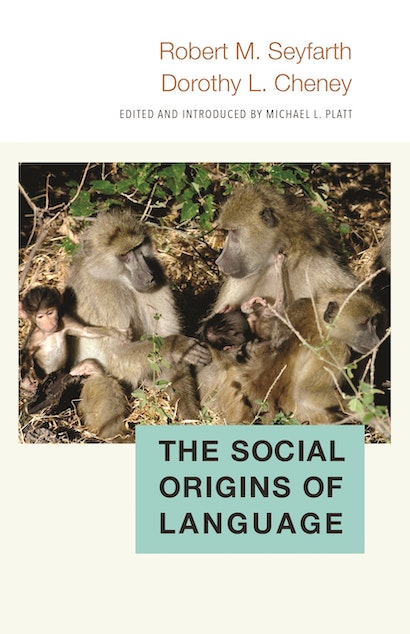 The origins of human language remain hotly debated. Despite growing appreciation of cognitive and neural continuity between humans and other animals, an evolutionary account of human language—in its modern form—remains as elusive as ever. The Social Origins of Language provides a novel perspective on this question and charts a new path toward its resolution.

In the lead essay, Robert Seyfarth and Dorothy Cheney draw on their decades-long pioneering research on monkeys and baboons in the wild to show how primates use vocalizations to modulate social dynamics. They argue that key elements of human language emerged from the need to decipher and encode complex social interactions. In other words, social communication is the biological foundation upon which evolution built more complex language.

Seyfarth and Cheney’s argument serves as a jumping-off point for responses by John McWhorter, Ljiljana Progovac, Jennifer E. Arnold, Benjamin Wilson, Christopher I. Petkov and Peter Godfrey-Smith, each of whom draw on their respective expertise in linguistics, neuroscience, philosophy, and psychology. Michael Platt provides an introduction, Seyfarth and Cheney a concluding essay. Ultimately, The Social Origins of Language offers thought-provoking viewpoints on how human language evolved.

"Centered on the seminal work of Seyfarth and Cheney, this concise book provides a fine overview of what leading investigators consider the likely origins of language. While The Social Origins of Language shows that this issue remains unclear, it lays out the full spectrum of intriguing possibilities."—Dale Purves, coeditor of Neuroscience

"The origin of language is a perplexing problem because important elements, such as semantics and syntax, have no parallels in other taxa. In this book, Seyfarth and Cheney contend that a productive approach would focus on pragmatics, as meaning provides important insight about the selective value of vocal signals. Their argument is debated by experts from a range of disciplines, making this essential reading for all those interested in how language evolved."—Joan Silk, coauthor of How Humans Evolved

"This is an inspiring discourse on the social function of communication. In response to a magnificent essay by Seyfarth and Cheney, the grandmasters of primate communication studies, leading scholars engage in a vivid debate on the origins of language. A must-read!"—Julia Fischer, author of Monkeytalk

"In this fascinating book, Seyfarth and Cheney, two of the most eminent living primatologists, propose a new idea of fundamental importance in understanding language evolution: that primate social cognition provided the foundations for linguistic meaning. Detailed commentaries by five leading scholars round out the volume, making it a major contribution to modern thinking about the evolution of language."—Tecumseh Fitch, author of The Evolution of Language

"Focused around a central essay by Seyfarth and Cheney, with five commentary essays by experts from relevant fields, this book is original in its specific linking of key generative features of language with the brain mechanisms and social functions of nonhuman primate communication. It will be read widely within primatology and language evolution circles."—Thom Scott-Phillips, author of Speaking Our Minds

"There is no doubt in my mind that this book will attract attention and will be widely referred to."—Cedric Boeckx, Catalan Institute for Advanced Studies