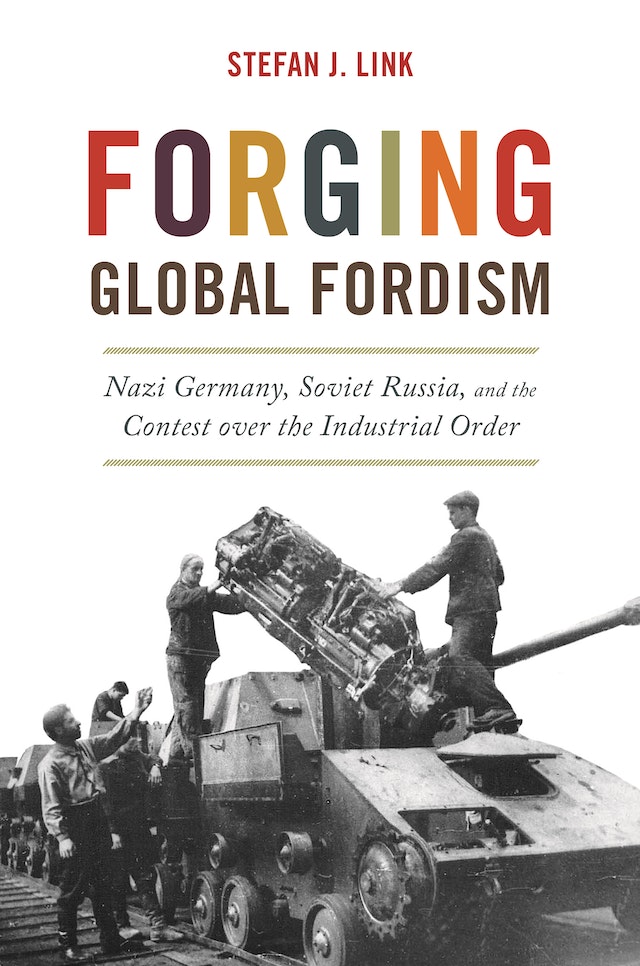 As the United States rose to ascendancy in the first decades of the twentieth century, observers abroad associated American economic power most directly with its burgeoning automobile industry. In the 1930s, in a bid to emulate and challenge America, engineers from across the world flocked to Detroit. Chief among them were Nazi and Soviet specialists who sought to study, copy, and sometimes steal the techniques of American automotive mass production, or Fordism. Forging Global Fordism traces how Germany and the Soviet Union embraced Fordism amid widespread economic crisis and ideological turmoil. This incisive book recovers the crucial role of activist states in global industrial transformations and reconceives the global thirties as an era of intense competitive development, providing a new genealogy of the postwar industrial order.

Stefan Link uncovers the forgotten origins of Fordism in Midwestern populism, and shows how Henry Ford’s antiliberal vision of society appealed to both the Soviet and Nazi regimes. He explores how they positioned themselves as America’s antagonists in reaction to growing American hegemony and seismic shifts in the global economy during the interwar years, and shows how Detroit visitors like William Werner, Ferdinand Porsche, and Stepan Dybets helped spread versions of Fordism abroad and mobilize them in total war.

Forging Global Fordism challenges the notion that global mass production was a product of post–World War II liberal internationalism, demonstrating how it first began in the global thirties, and how the spread of Fordism had a distinctly illiberal trajectory.

"Link gives a fresh analysis of an overlooked dimension of interwar history, tracing the singular influence of Ford’s innovations and ideas upon the final, cataclysmic stages of twentieth-century industrialization. Forging Global Fordism allows us to better explore the relationship between industrialism, political ideology, and global competition, while also shedding important light on our tumultuous present moment."—Justin H. Vassallo, Boston Review

"In a smart, probing examination of Fordism as an intellectual and technical system, Stefan Link shows how societies as different as Nazi Germany and the Soviet Union came to adopt innovative production methods developed by a quintessentially American car company. A fascinating story."—Joshua B. Freeman, author of Behemoth: A History of the Factory and the Making of the Modern World

"Link's beautifully written book illustrates the competitive race toward Fordist mass production in surprisingly disparate political and economic regimes across the world. Forging Global Fordism is an indispensable and lucid contribution to our understanding of the global 1930s and the importance of the interwar years in shaping the postwar order."—Vanessa Ogle, author of The Global Transformation of Time: 1870–1950

"Forging Global Fordism offers a reinterpretation of the history of Fordism by recovering the origins of mass production in the American Midwest and examining the role of Henry Ford's illiberal visions of political economy during the global 1930s. Link combines perspectives from economic and global history in a fresh and convincing way."—Kiran Klaus Patel, author of The New Deal: A Global History

"Forging Global Fordism presents a global history of the 1930s centered not on Wall Street, FDR, Tokyo, or even Hitler, but on Henry Ford. Viewed from Detroit, that rueful decade imparts one surprising lesson after another."—Oscar Sanchez-Sibony, author of Red Globalization: The Political Economy of the Soviet Cold War from Stalin to Khrushchev

"Forging Global Fordism is an exciting foray into the entangled histories of automobile production in the United States, Soviet Russia, and Nazi Germany. Writing with both passion and wit, Link addresses some of the most perennial and difficult historical questions about the relationship between politics and economics."—Lewis H. Siegelbaum, author of Cars for Comrades: The Life of the Soviet Automobile