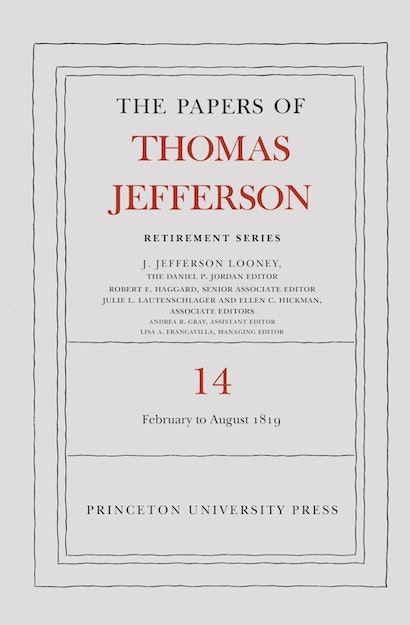 The 637 documents in this volume span 1 February to 31 August 1819. As a founding member of the University of Virginia Board of Visitors, Jefferson helps to obtain builders for the infant institution, responds to those seeking professorships, and orchestrates the establishment of a classical preparatory school in Charlottesville. In a letter to Vine Utley, Jefferson details his daily regimen of a largely vegetarian diet, bathing his feet in cold water each morning, and horseback riding. Continuing to indulge his wide-ranging intellectual interests, Jefferson receives publications on the proper pronunciation of Greek and discusses the subject himself in a letter to John Adams. Jefferson also experiences worrying and painful events, including hailstorm damage at his Poplar Forest estate, a fire in the North Pavilion at Monticello, the illness of his slave Burwell Colbert, and a fracas in which Jefferson’s grandson-in-law Charles Bankhead stabs Jefferson’s grandson Thomas Jefferson Randolph on court day in Charlottesville. Worst of all, Jefferson’s financial problems greatly increase when the bankruptcy of his friend Wilson Cary Nicholas leaves Jefferson responsible for $20,000 in notes he had endorsed for Nicholas.