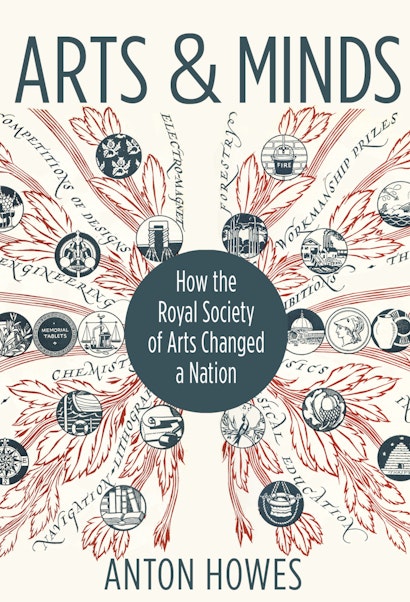 From its beginnings in a coffee house in the mid-eighteenth century, the Royal Society for the Encouragement of Arts, Manufactures and Commerce has tried to improve British life in every way imaginable. It has sought to influence how Britons work, how they are educated, the music they listen to, the food they eat, the items in their homes, and even how they remember their own history. Arts and Minds is the remarkable story of an institution unlike any other—a society for the improvement of everything and anything.

Drawing on exclusive access to a wealth of rare papers and artefacts from the Society’s own archives, Anton Howes shows how this vibrant and singularly ambitious organisation has evolved and adapted, constantly having to reinvent itself to keep in step with changing times. The Society has served as a platform for Victorian utilitarian reformers, purchased and restored an entire village, encouraged the planting of more than sixty million trees, and sought technological alternatives to child labour. But this is more than just a story about unusual public initiatives. It is an engaging and authoritative history of almost three centuries of social reform and competing visions of a better world—the Society’s members have been drawn from across the political spectrum, including Adam Smith, Edmund Burke, and Karl Marx.

Informative and entertaining, Arts and Minds reveals how a society of public-spirited individuals tried to make their country a better place, and draws vital lessons from their triumphs and failures for all would-be reformers today.

Anton Howes is historian in residence at the Royal Society for the Encouragement of Arts, Manufactures and Commerce. He lives in London. Twitter @antonhowes

"A comedy about preposterous or earnest characters at work in an essentially virtuous institution."—Matthew Sweet, History Today

"I’ve greatly enjoyed reading Arts and Minds. . . . [this] book is clearly a labour of love, and is packed with interesting bits of information. . . . anybody interested in the process of invention, diffusion and changing tastes will greatly enjoy reading this."—Diane Coyle, Enlightened Economist

"[Arts and Minds] is simply a very good read. Anton avoids the trap of writing as if for a dissertation and laying on the jargon, and simply tells a rattling good story, full of eccentric characters and colourful detail."—Mike Paterson, London Historians' Blog

"This enjoyable and interesting book tells the story of the Royal Society of Arts from its founding in 1754 to the present day. . . . Howes is to be thanked for a story so very well told."—Peter Stansky, Journal of Interdisciplinary History

"[An] interesting, detailed history of the RSA, whose broad mission was and is hard to define. . . . Historians of different interests will find this book fascinating, and Benjamin Franklin, an early member, would be pleased by it."—Choice Reviews

"Howes's accessible and well-paced book captures the changing ambitions and identity of the Society. I read it with pleasure."—Martin Daunton, author of Wealth and Welfare: An Economic and Social History of Britain, 1851–1951

"Engaging, well-written, informed, and researched to the hilt."—Joel Mokyr, author of A Culture of Growth: The Origins of the Modern Economy