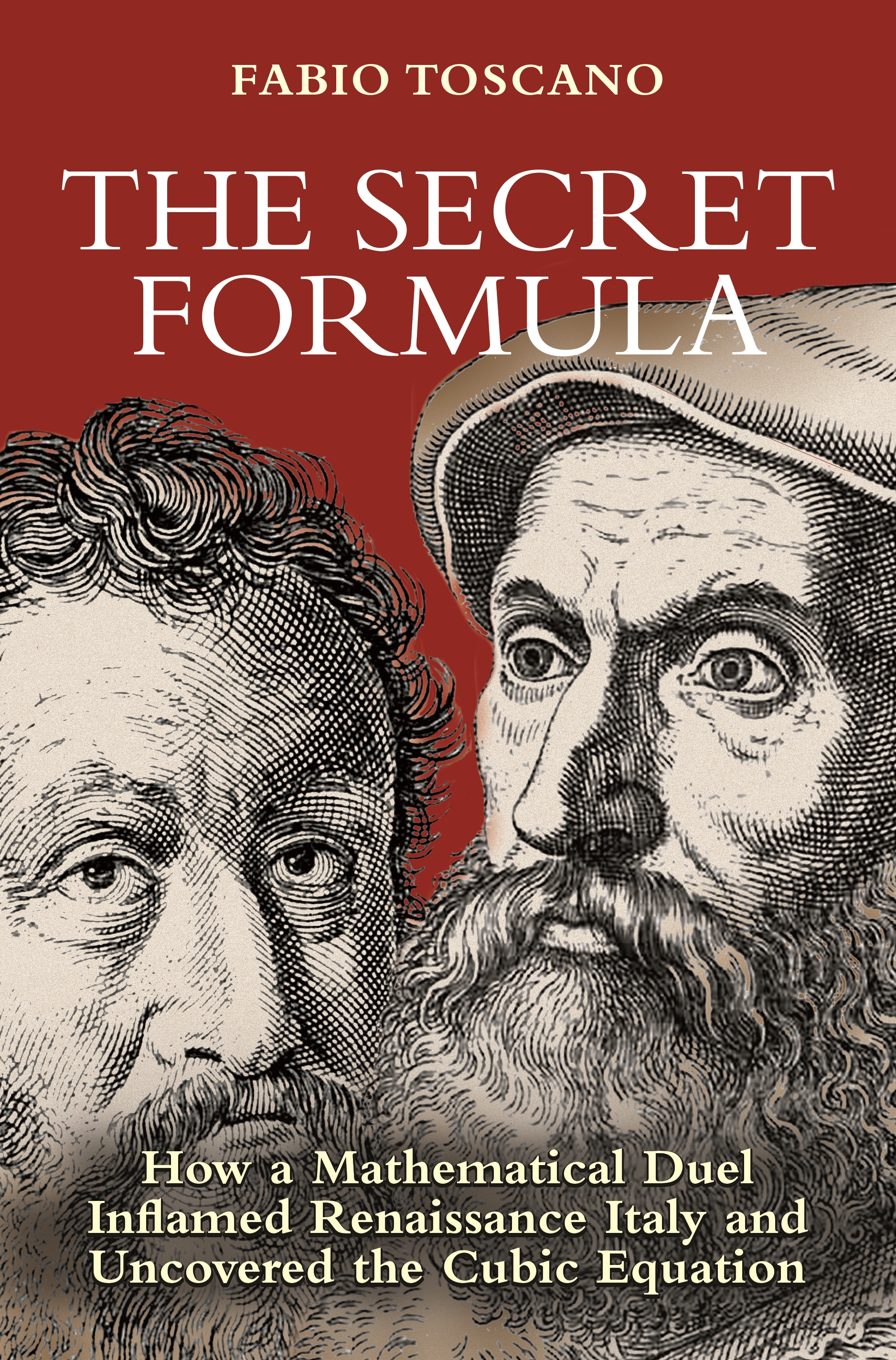 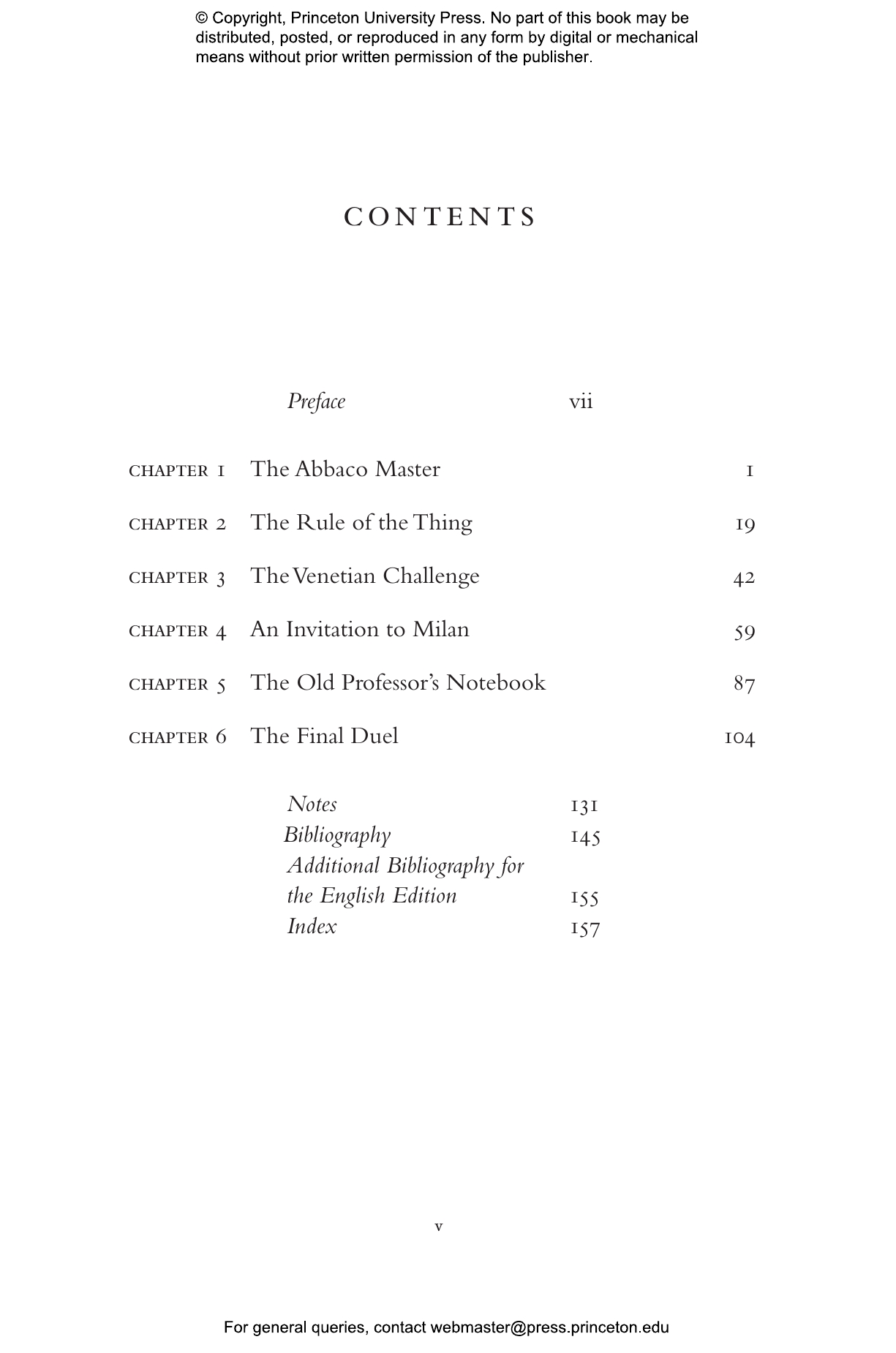 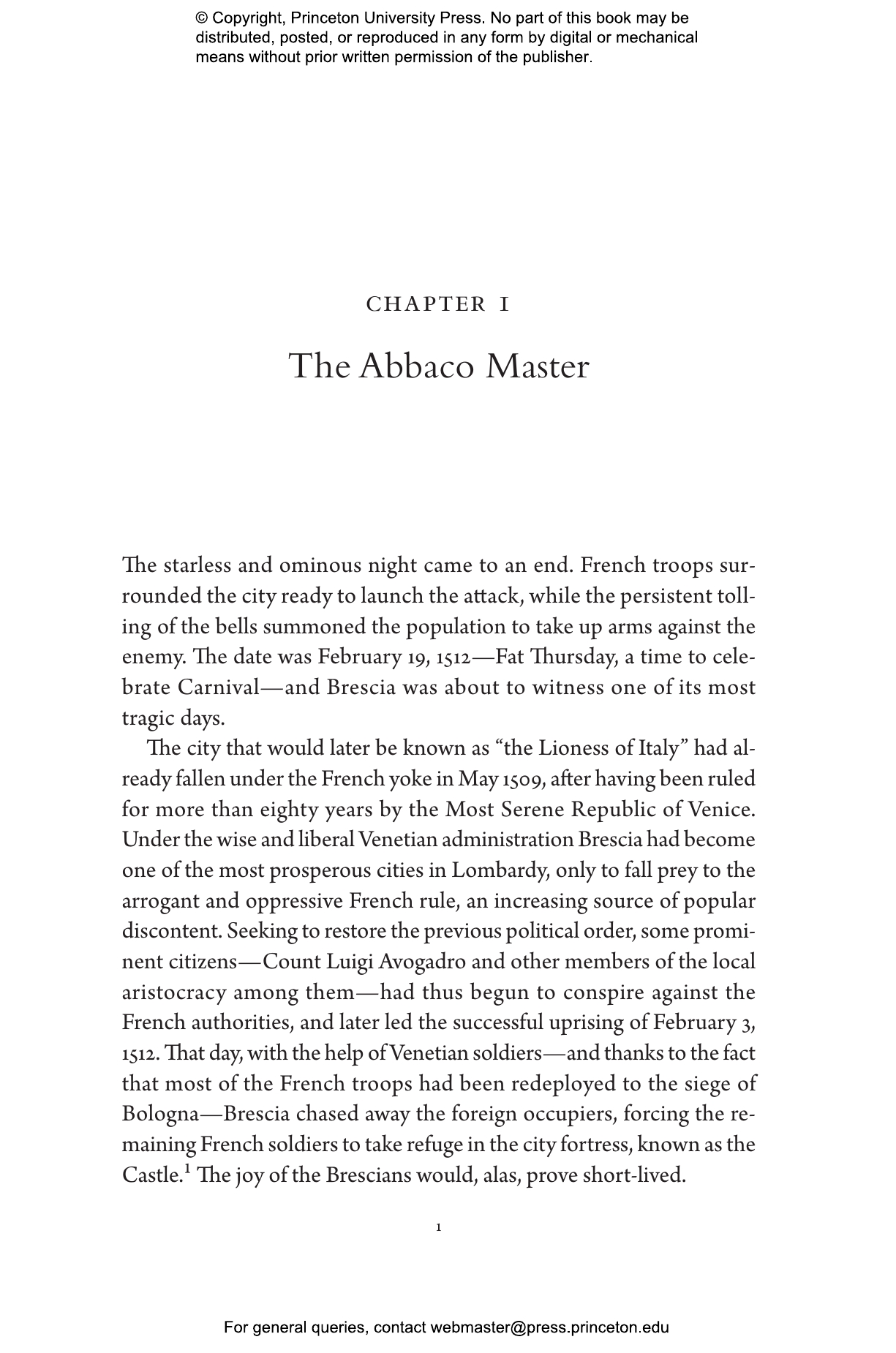 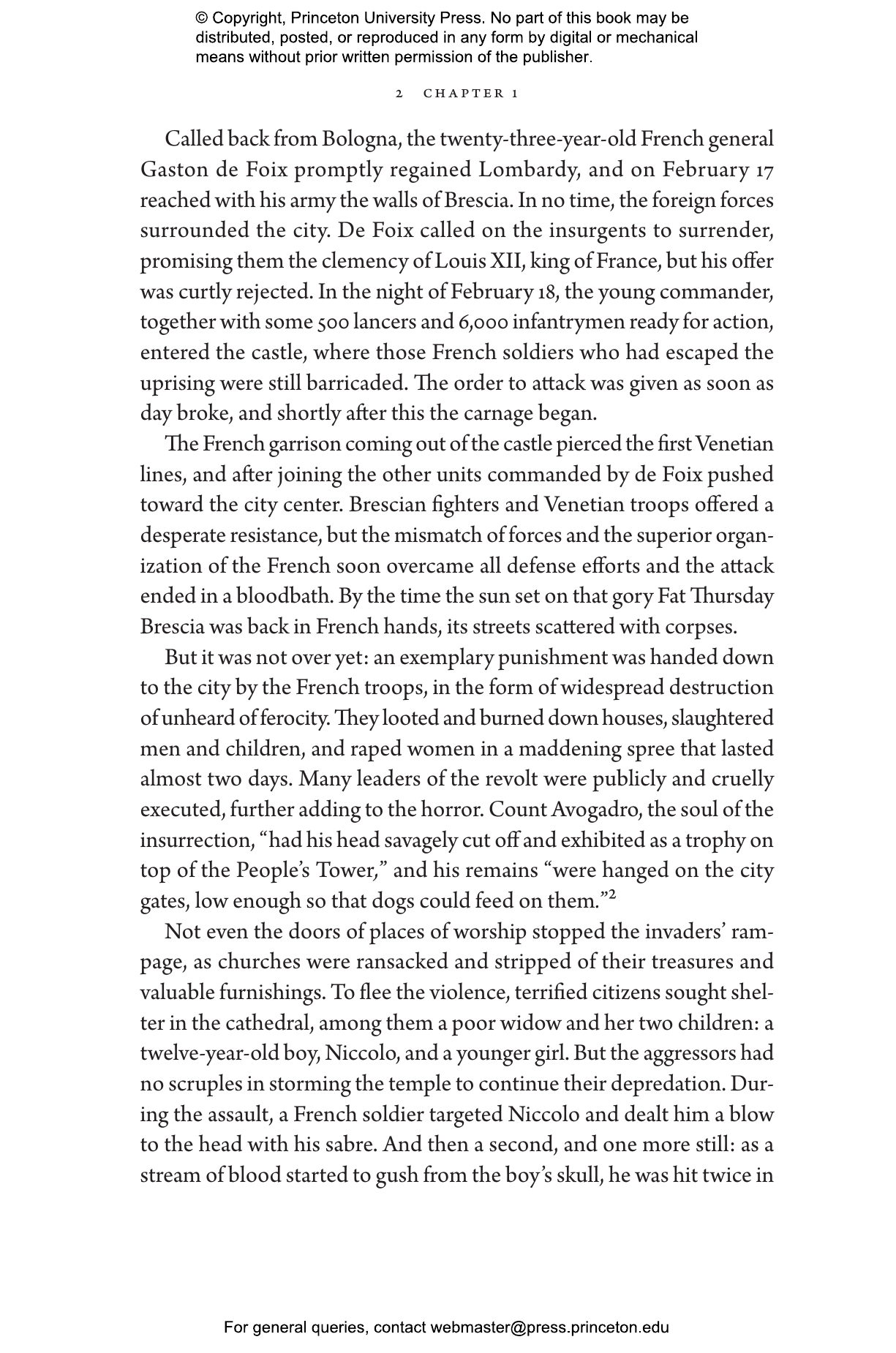 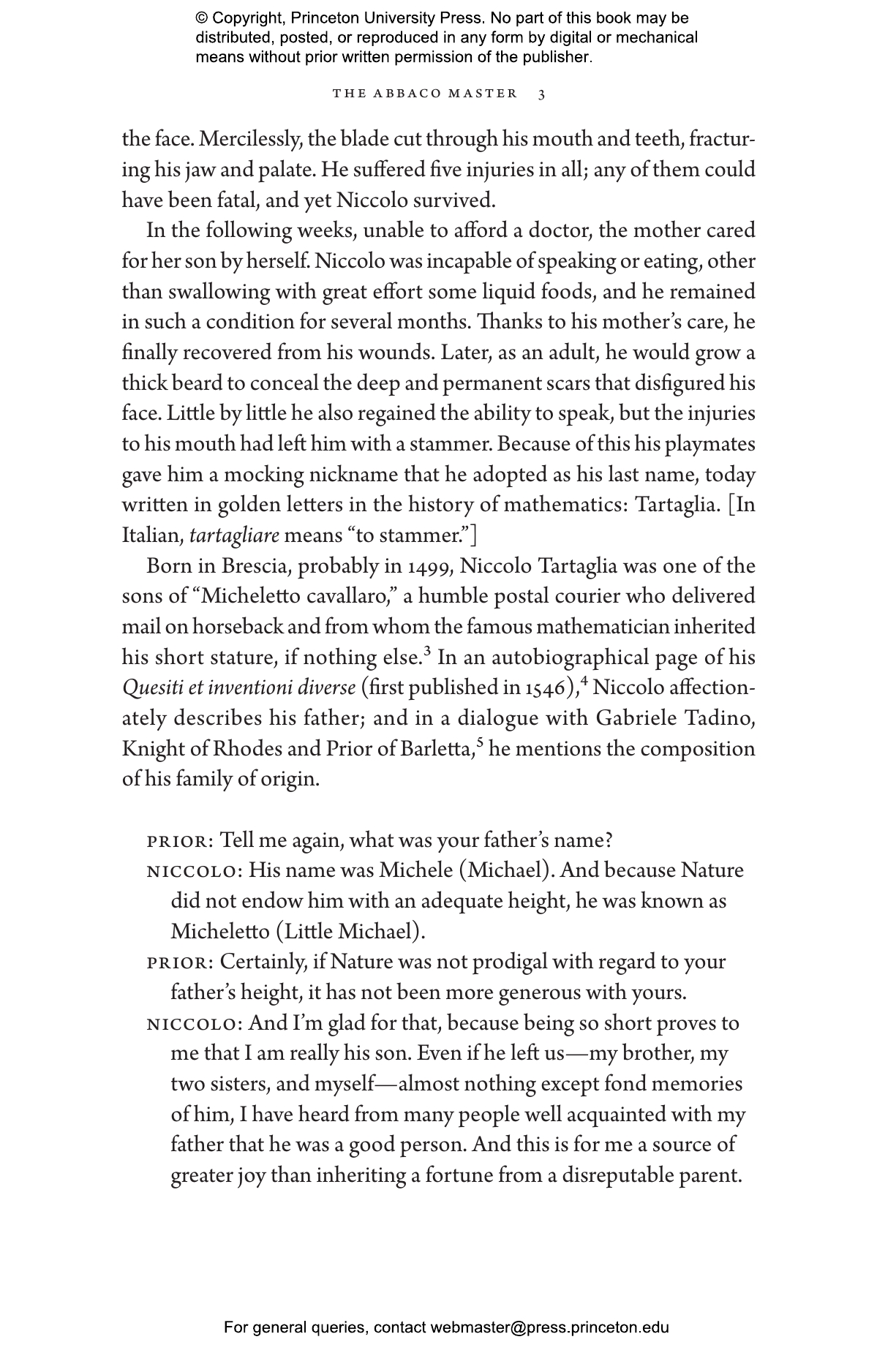 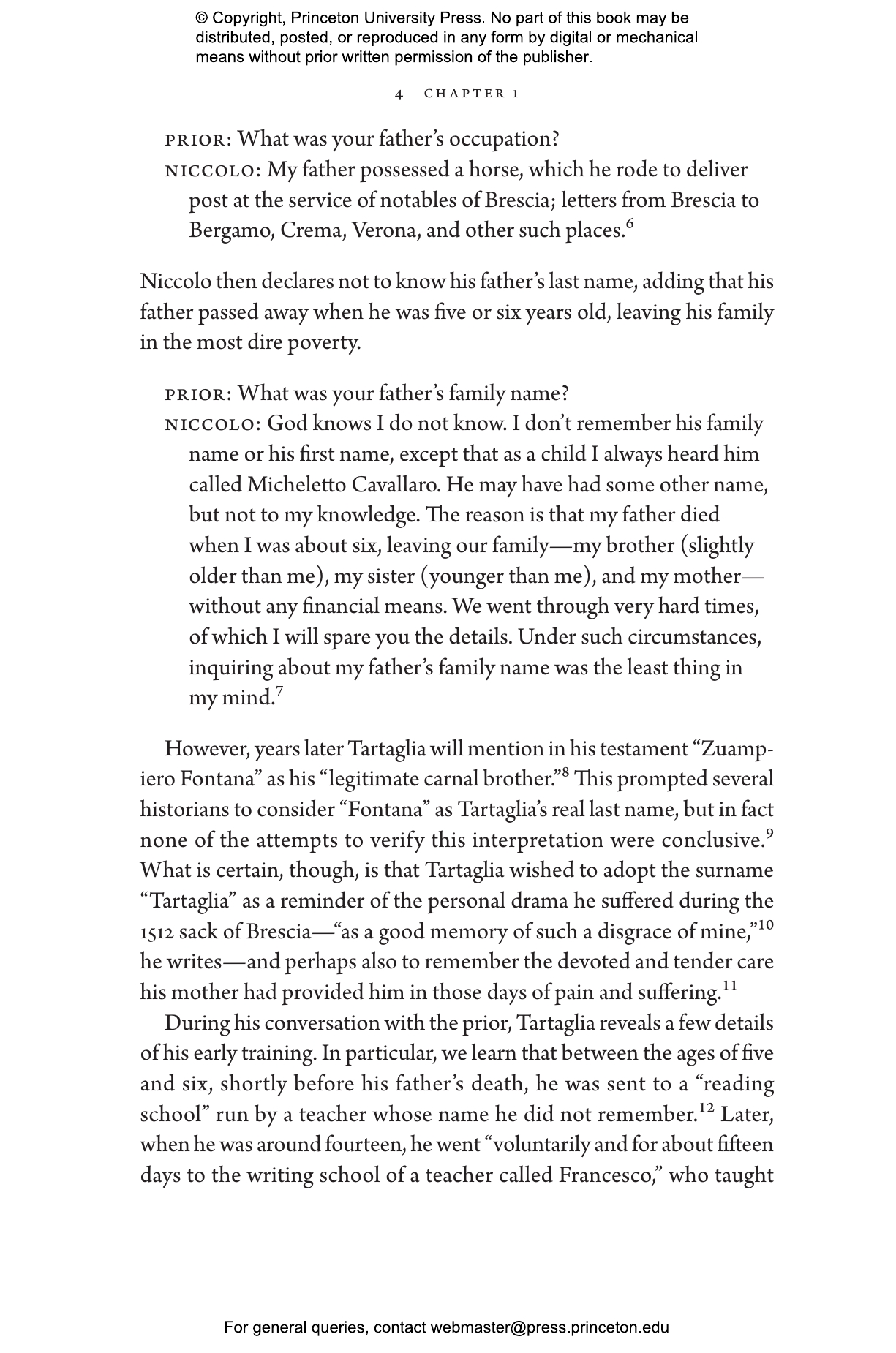 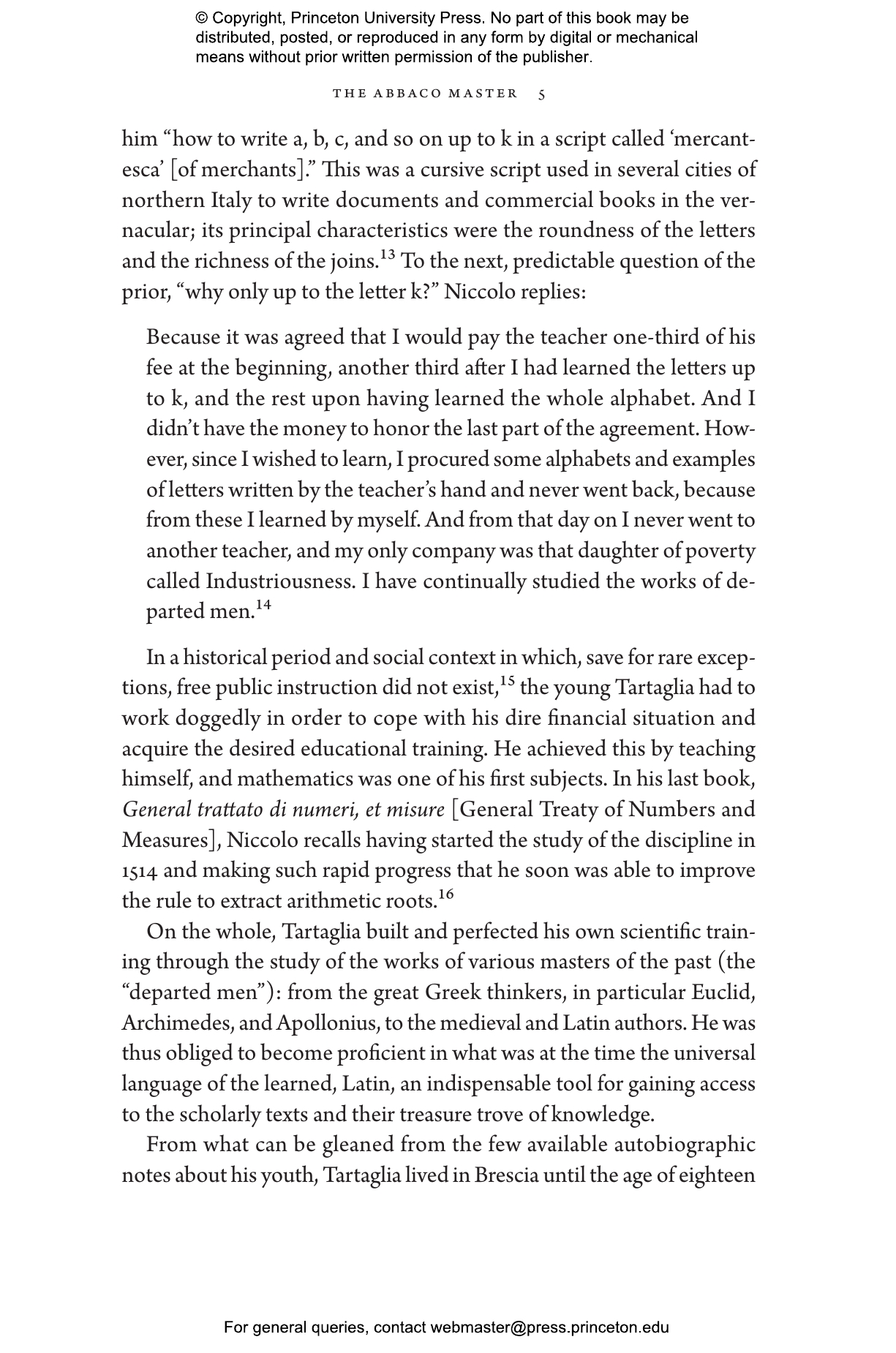 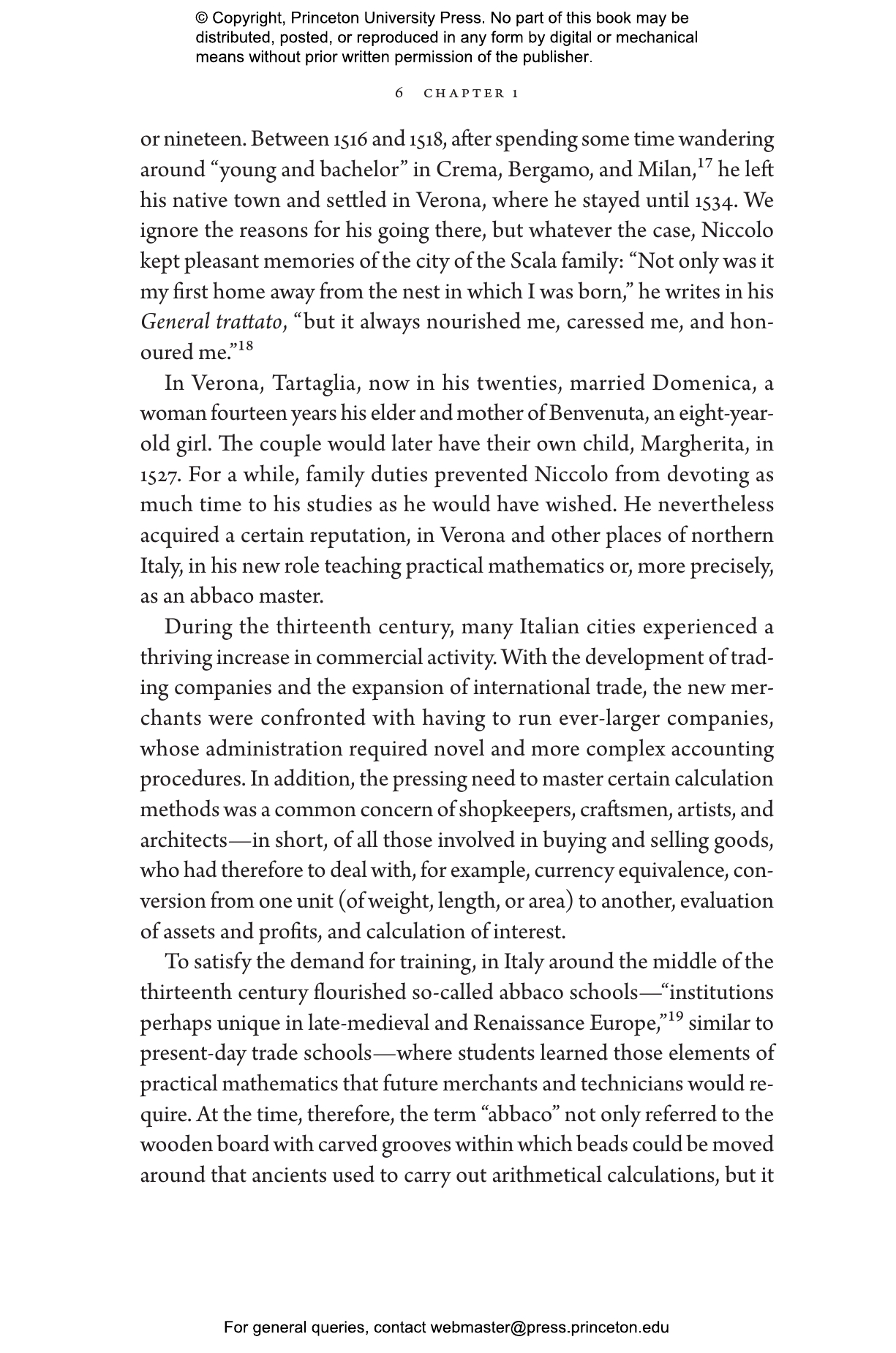 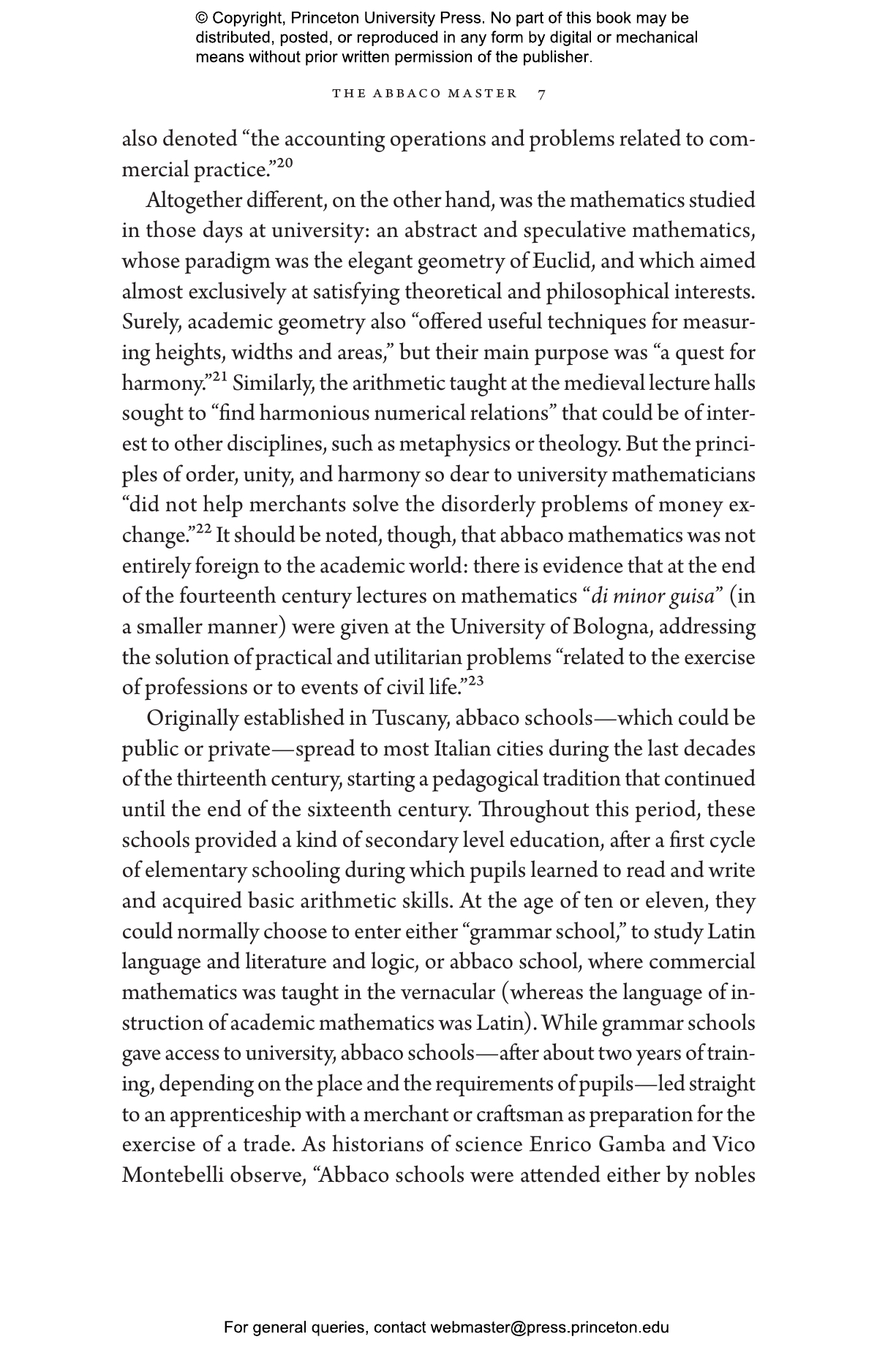 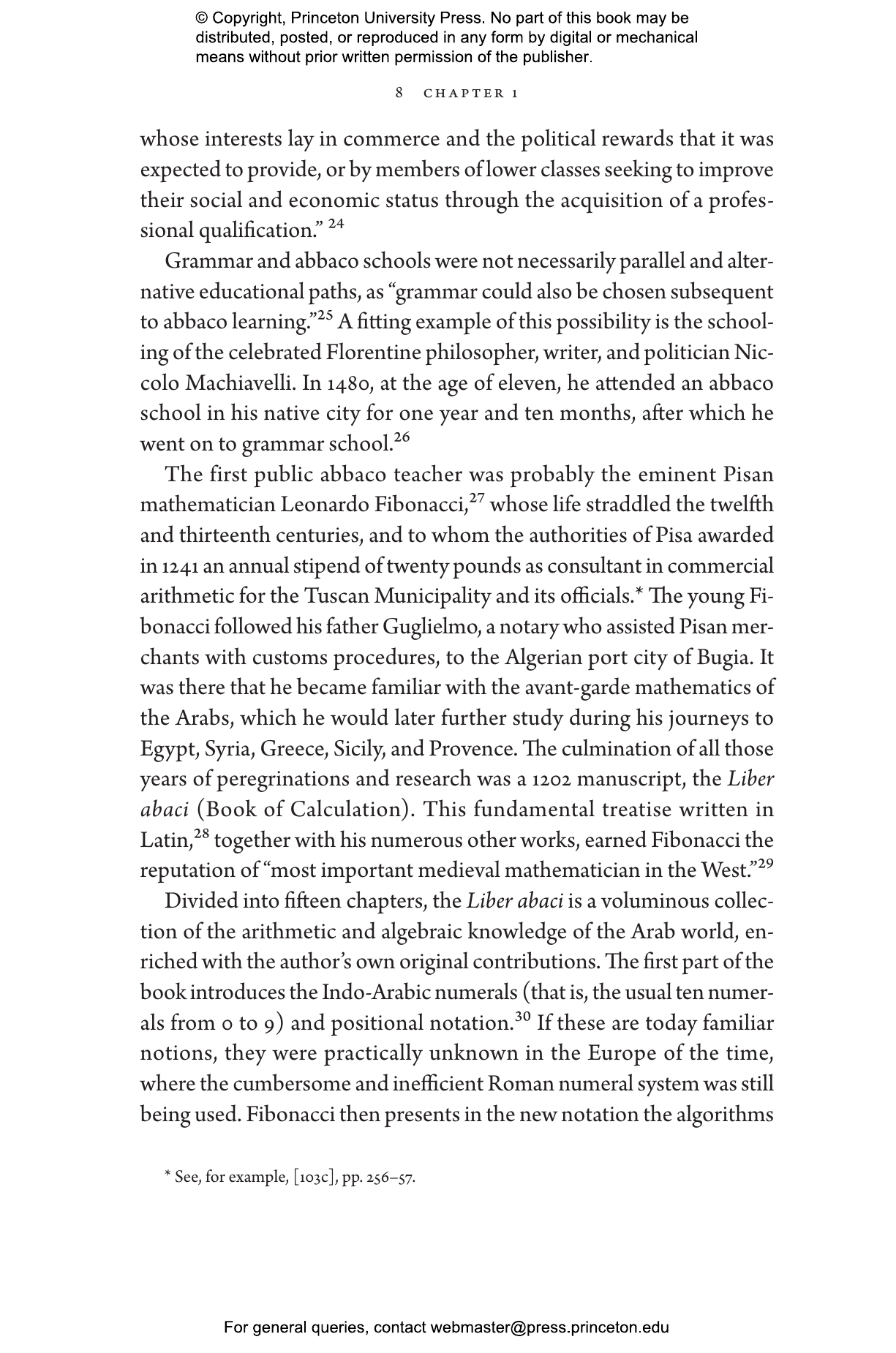 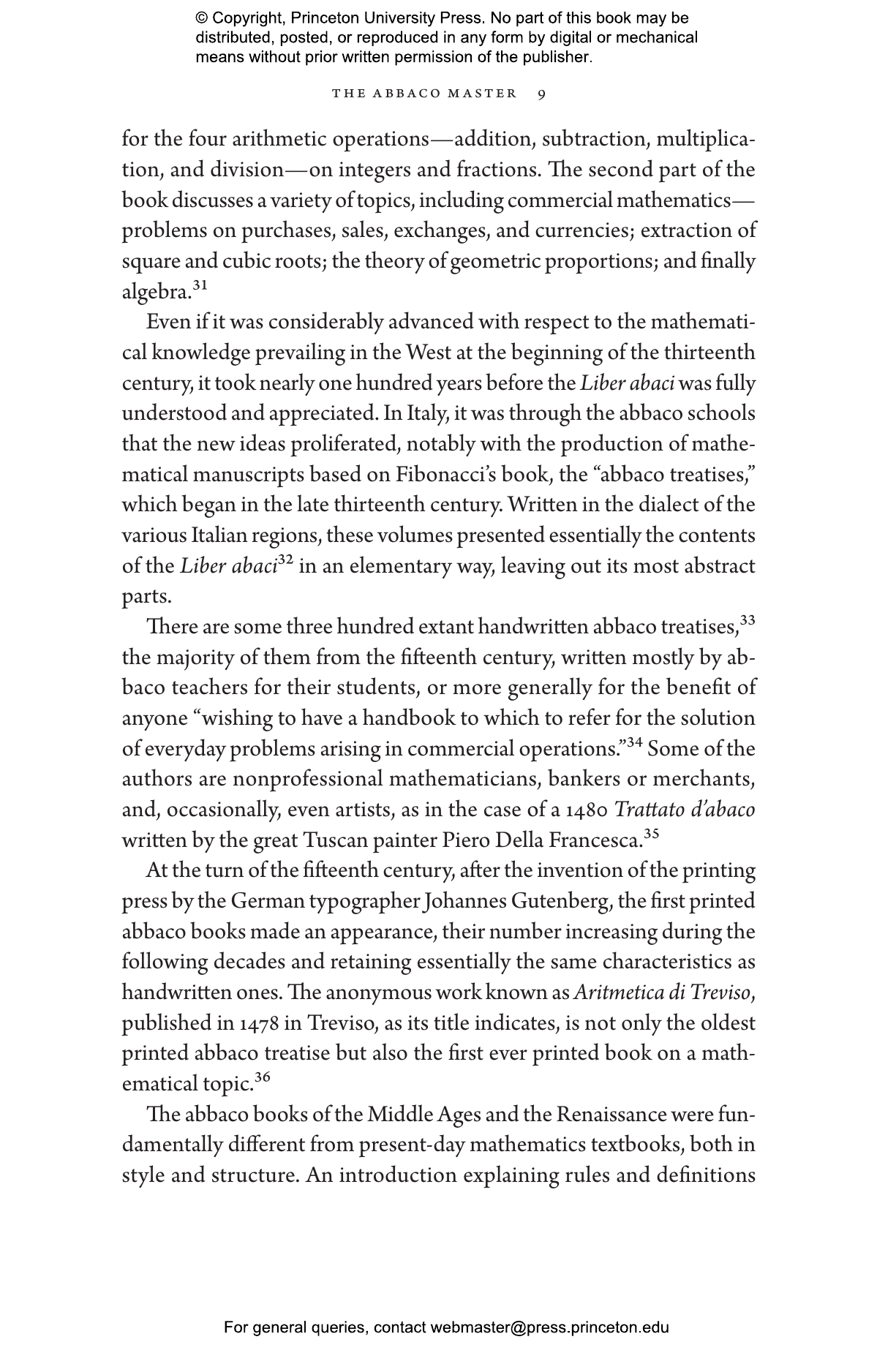 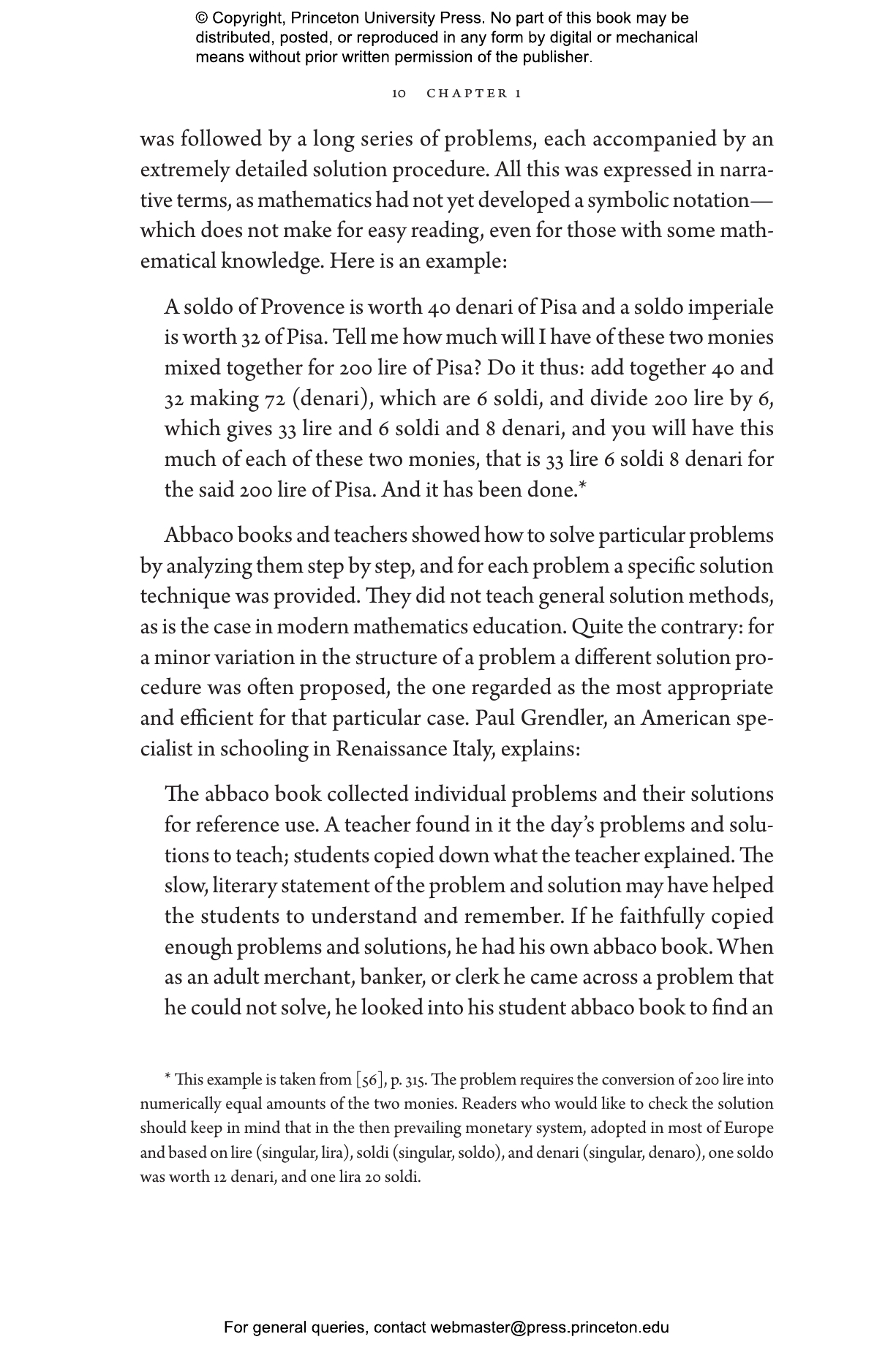 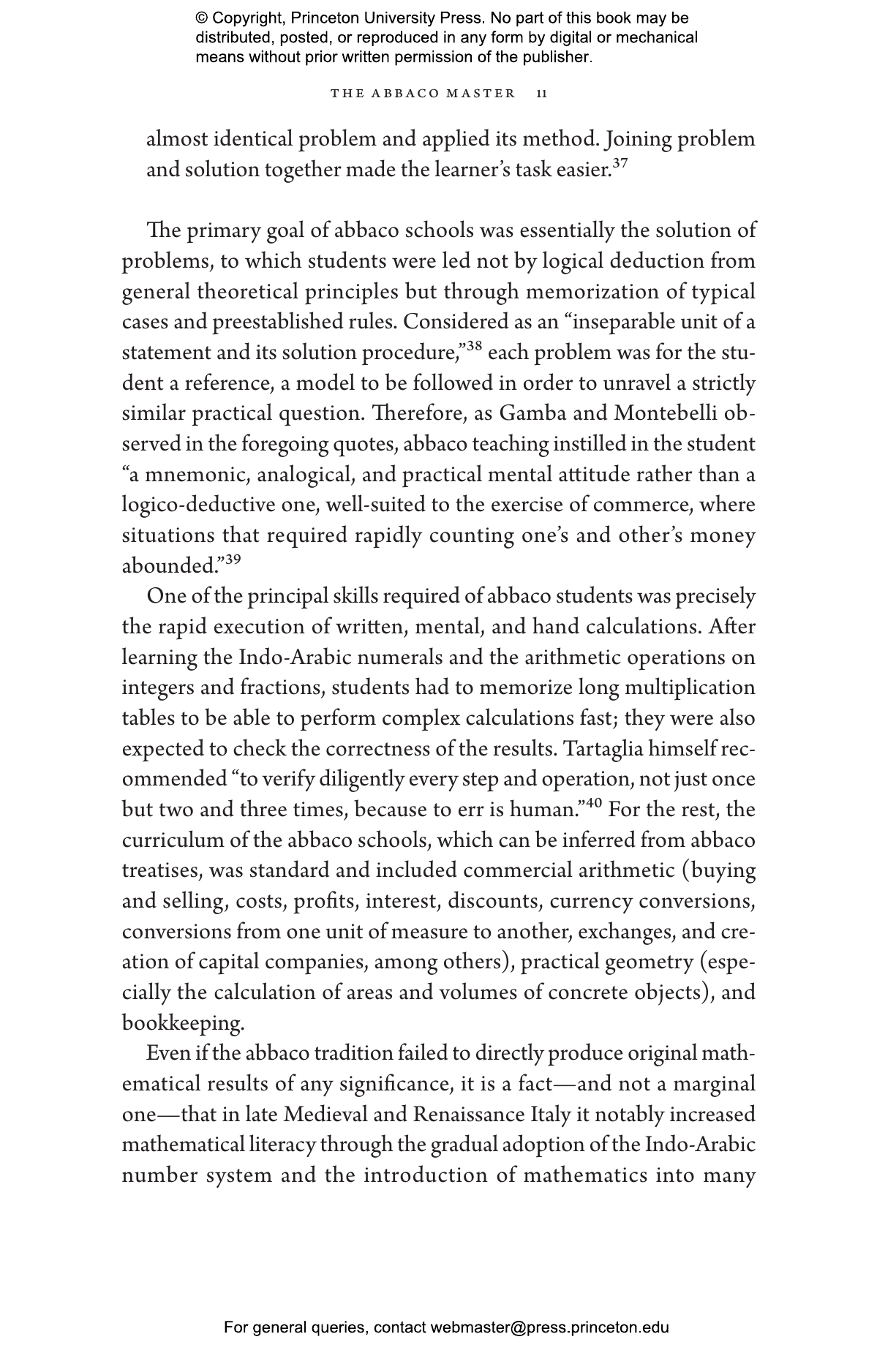 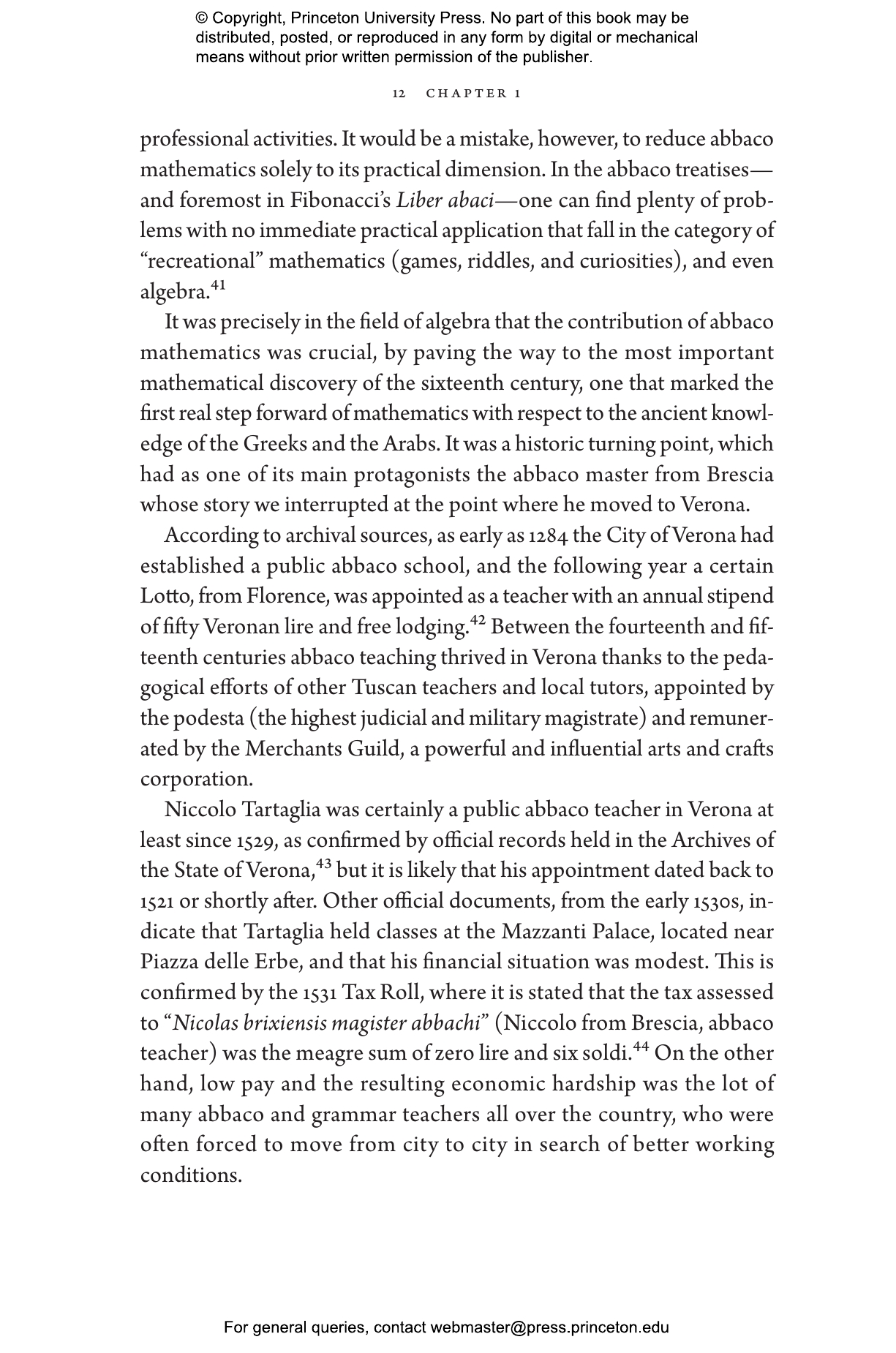 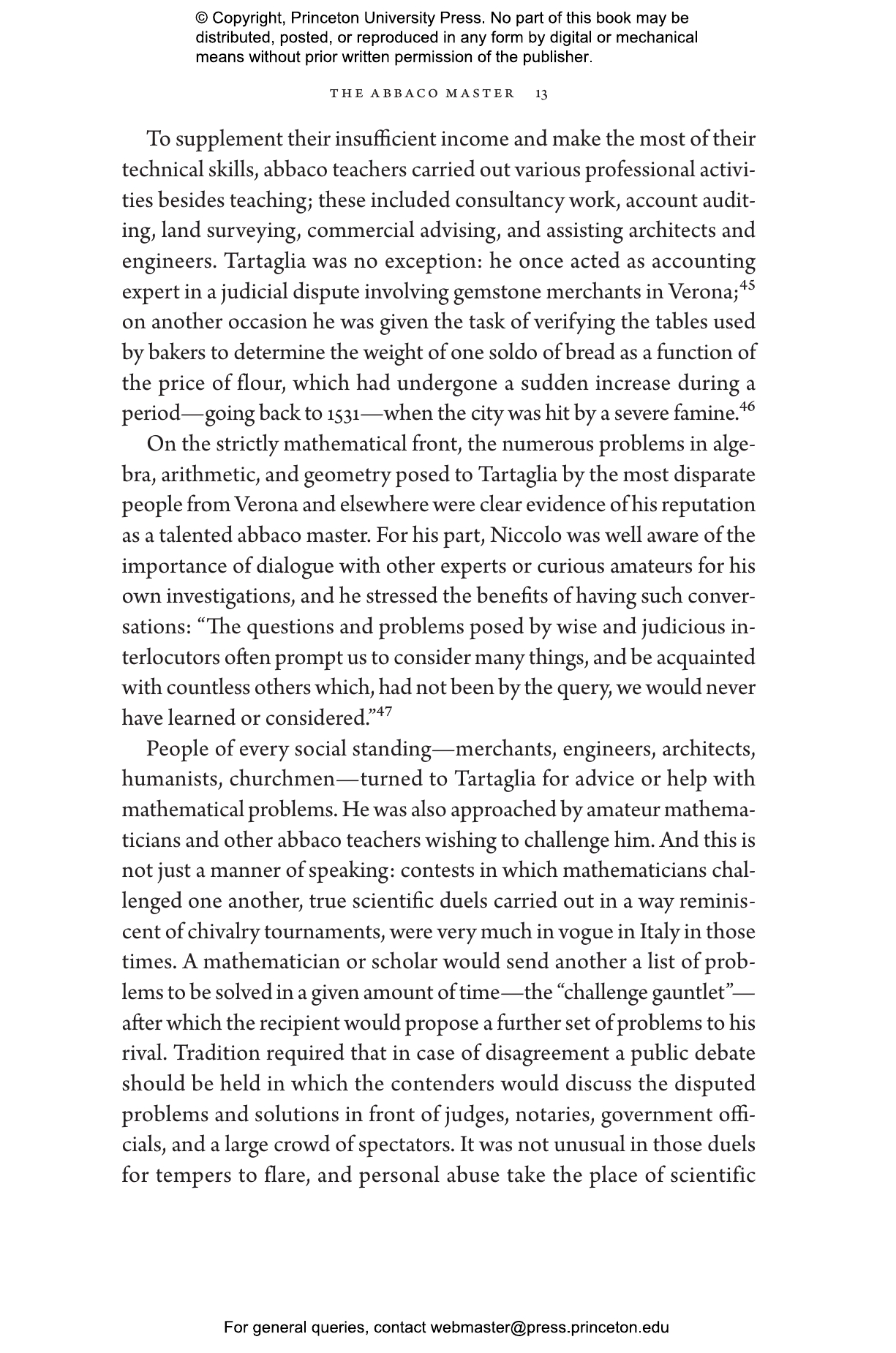 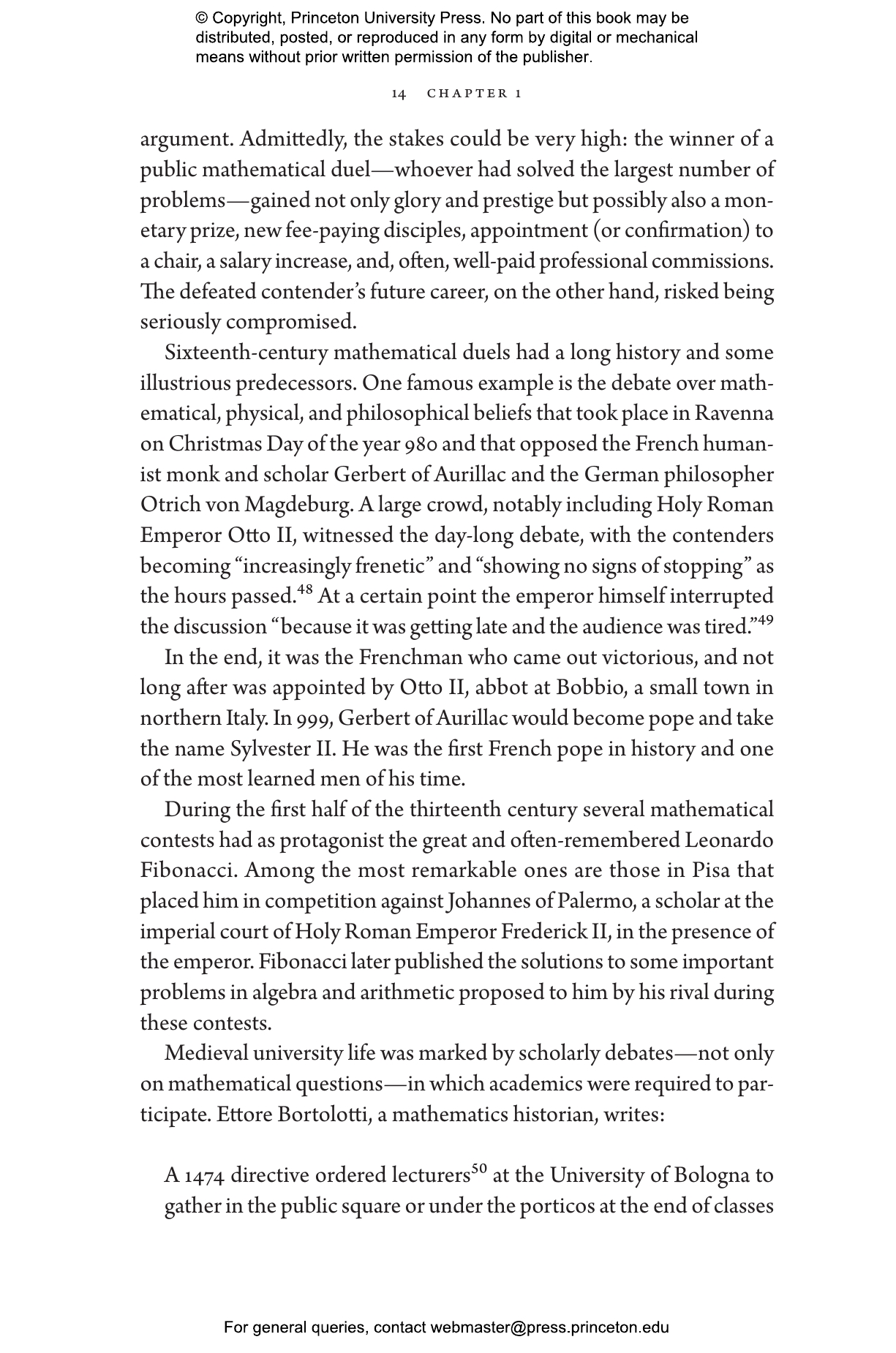 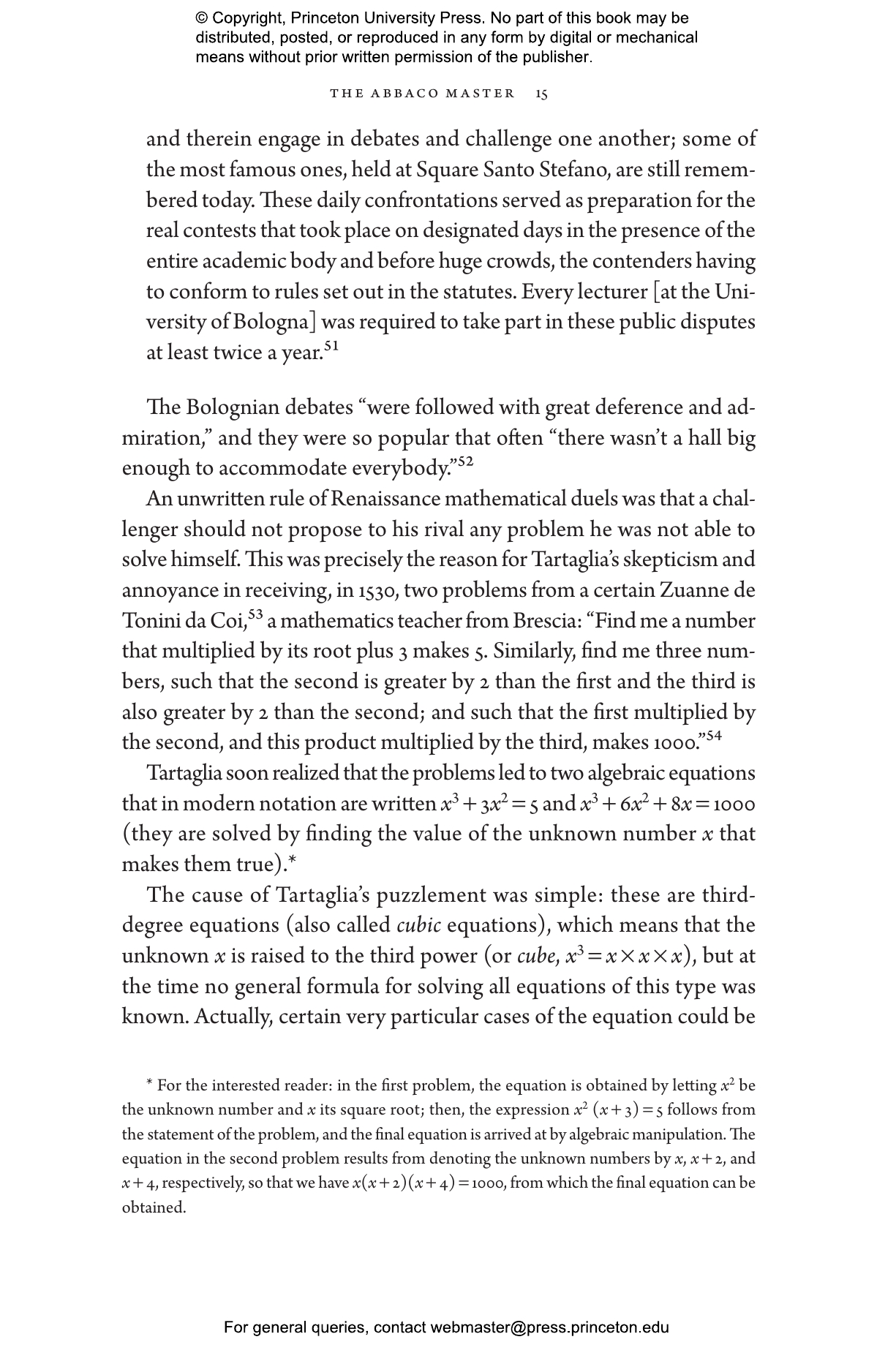 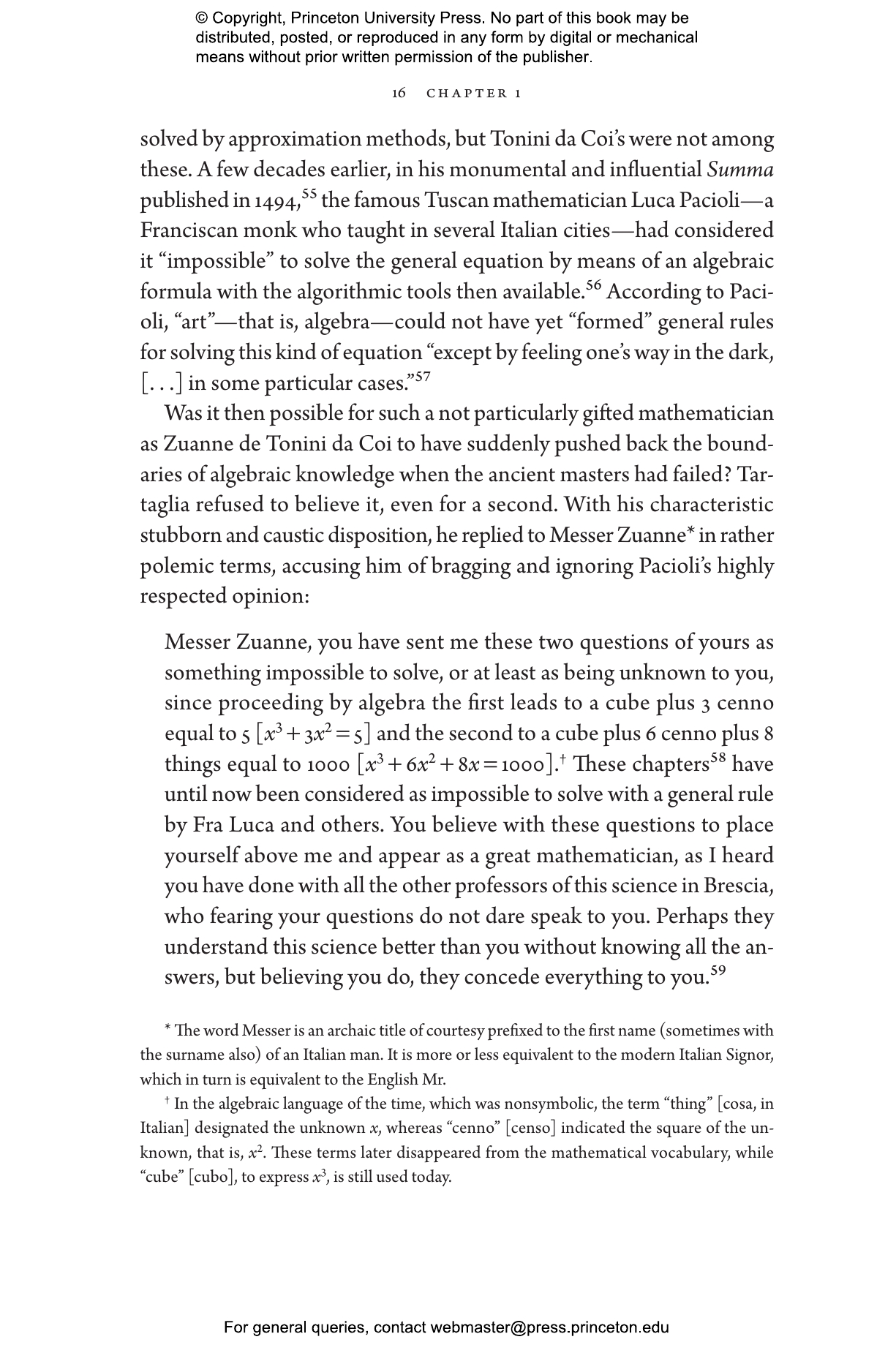 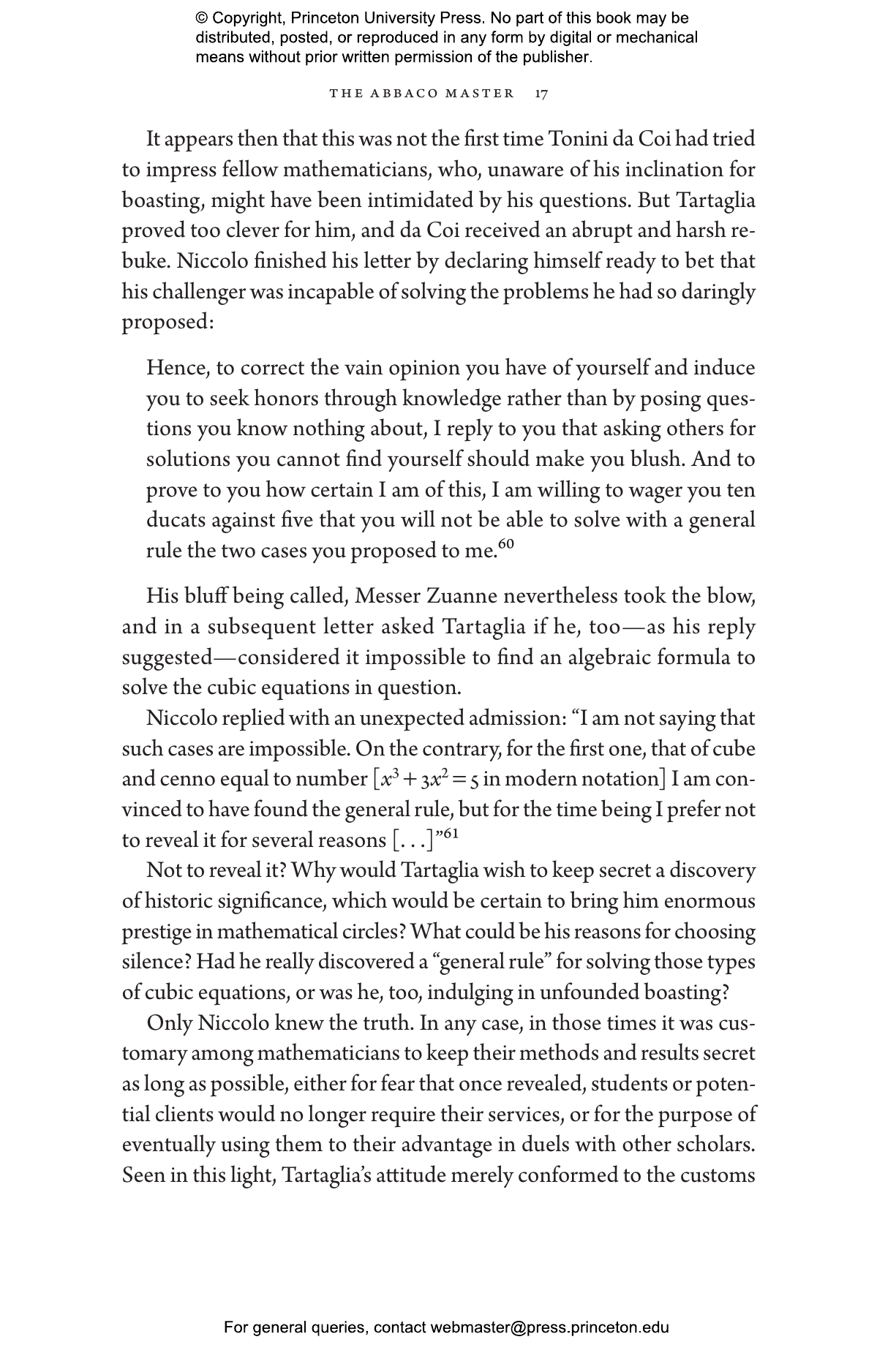 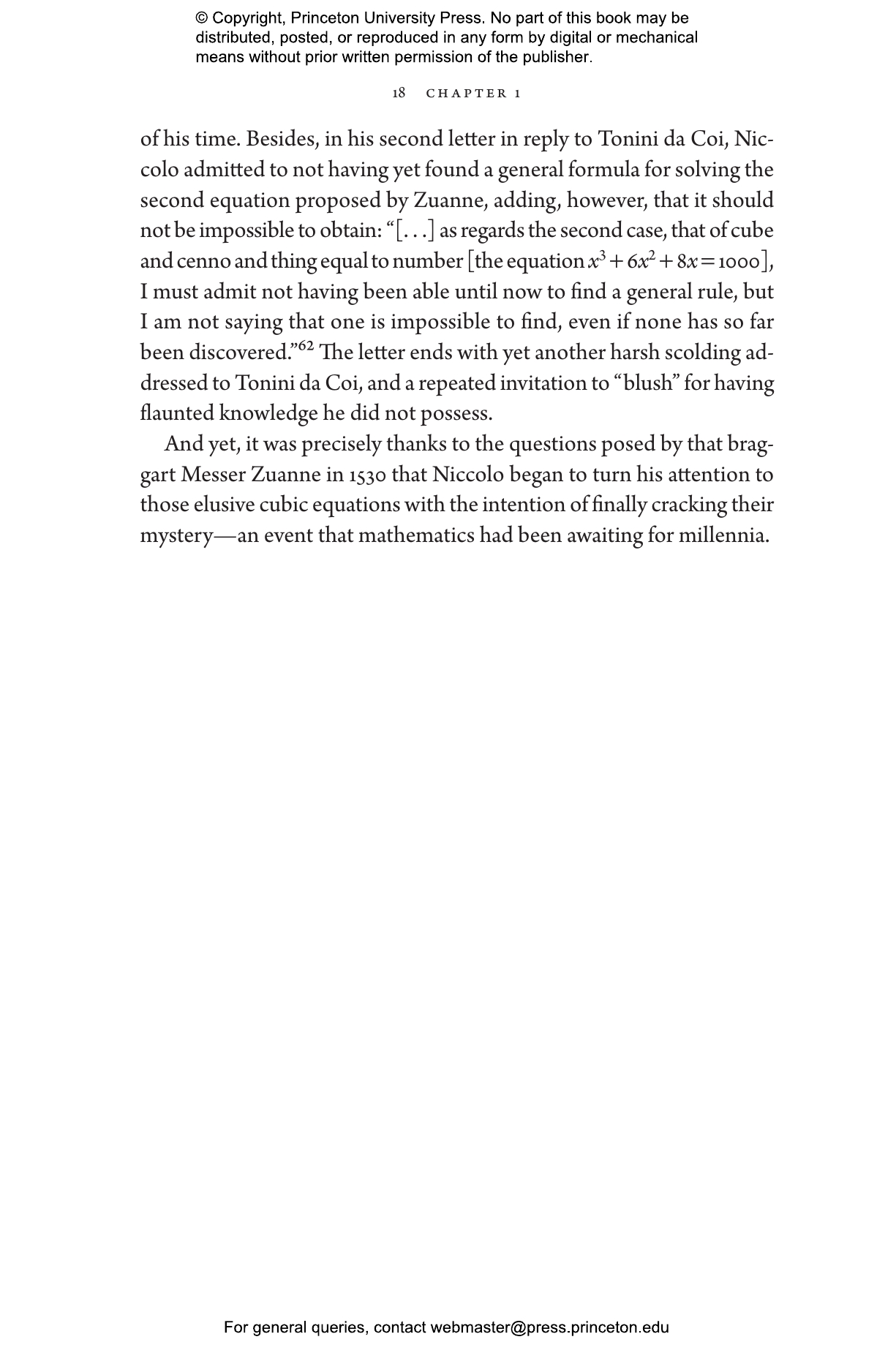 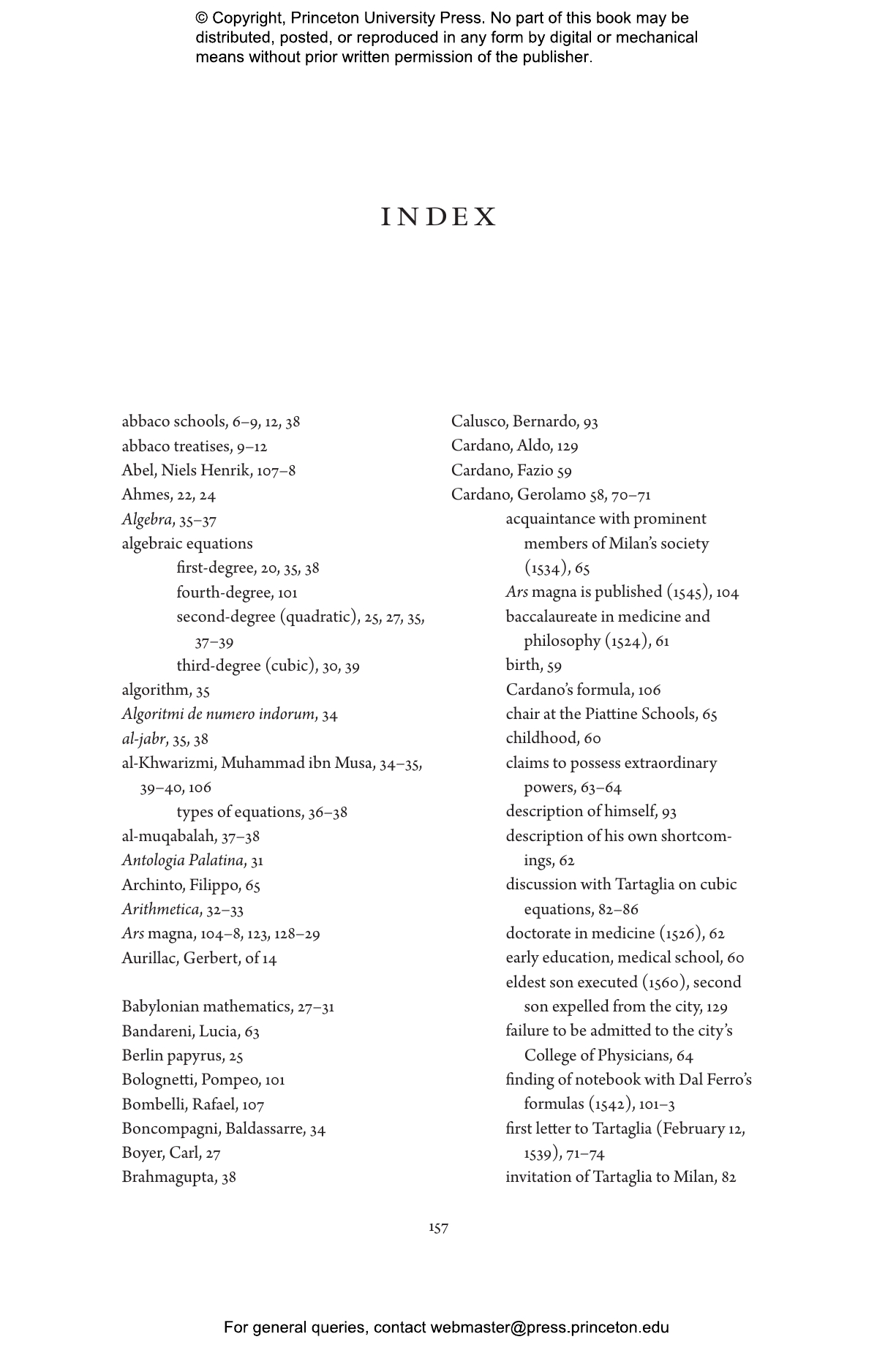 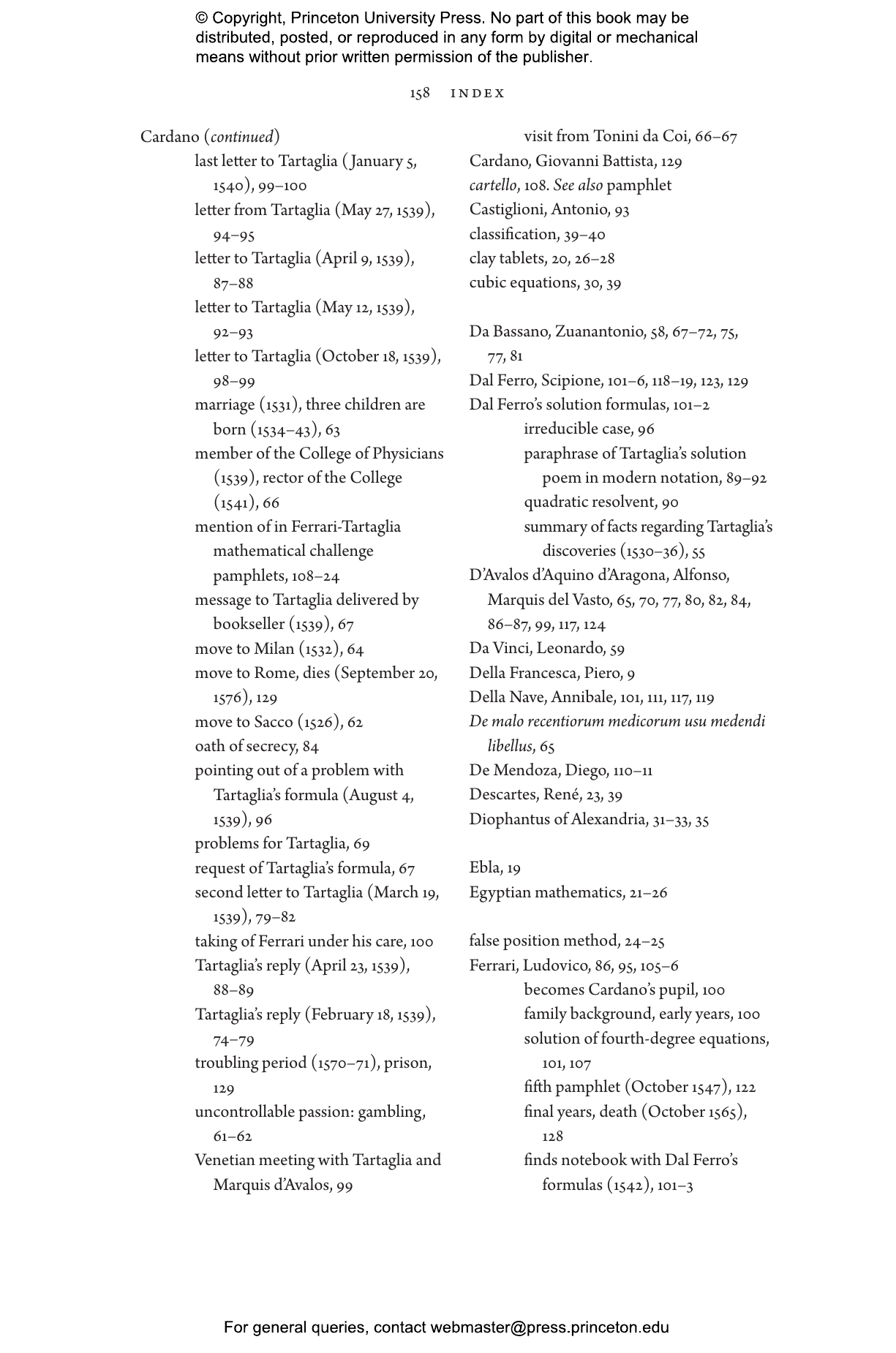 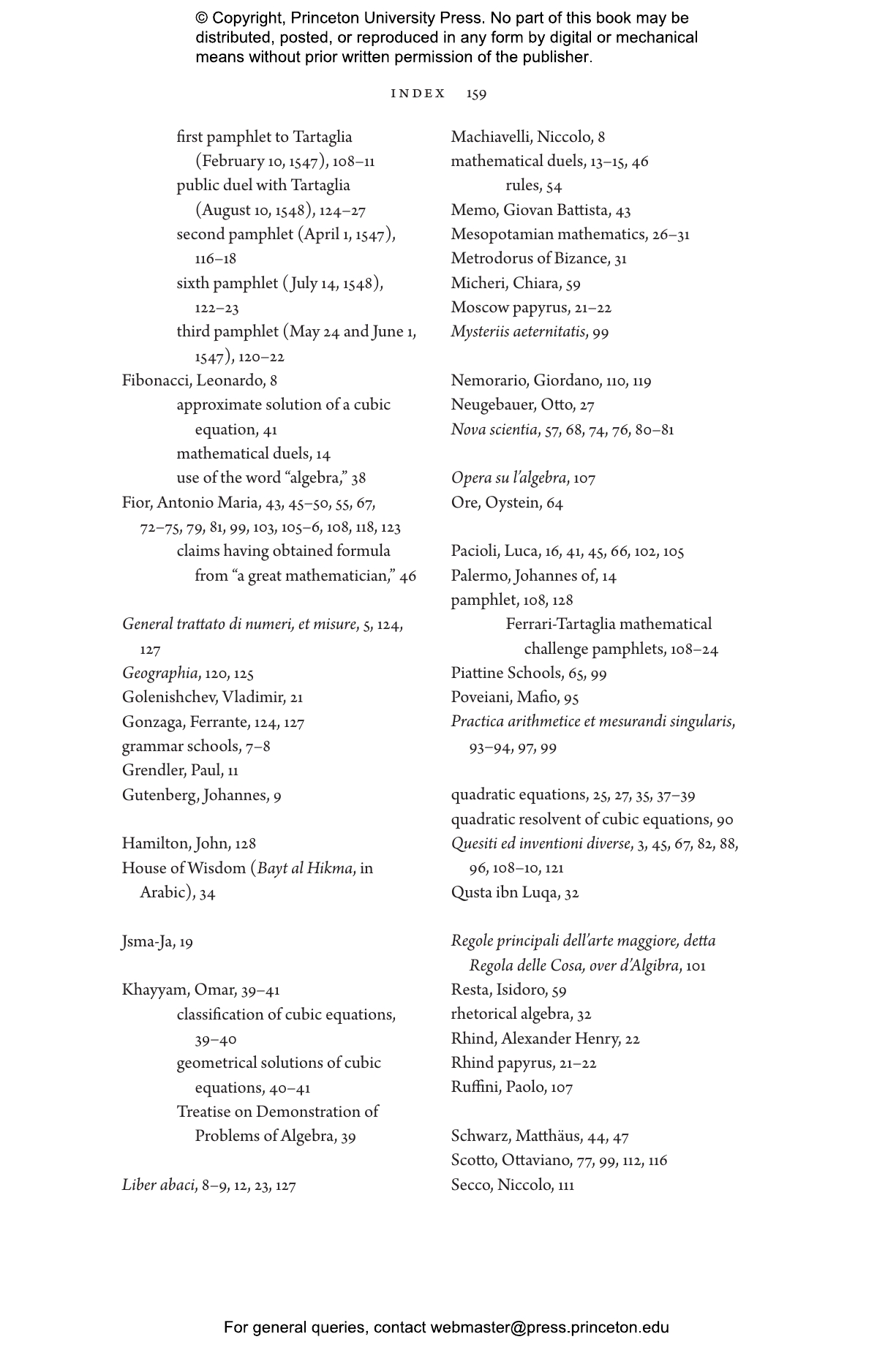 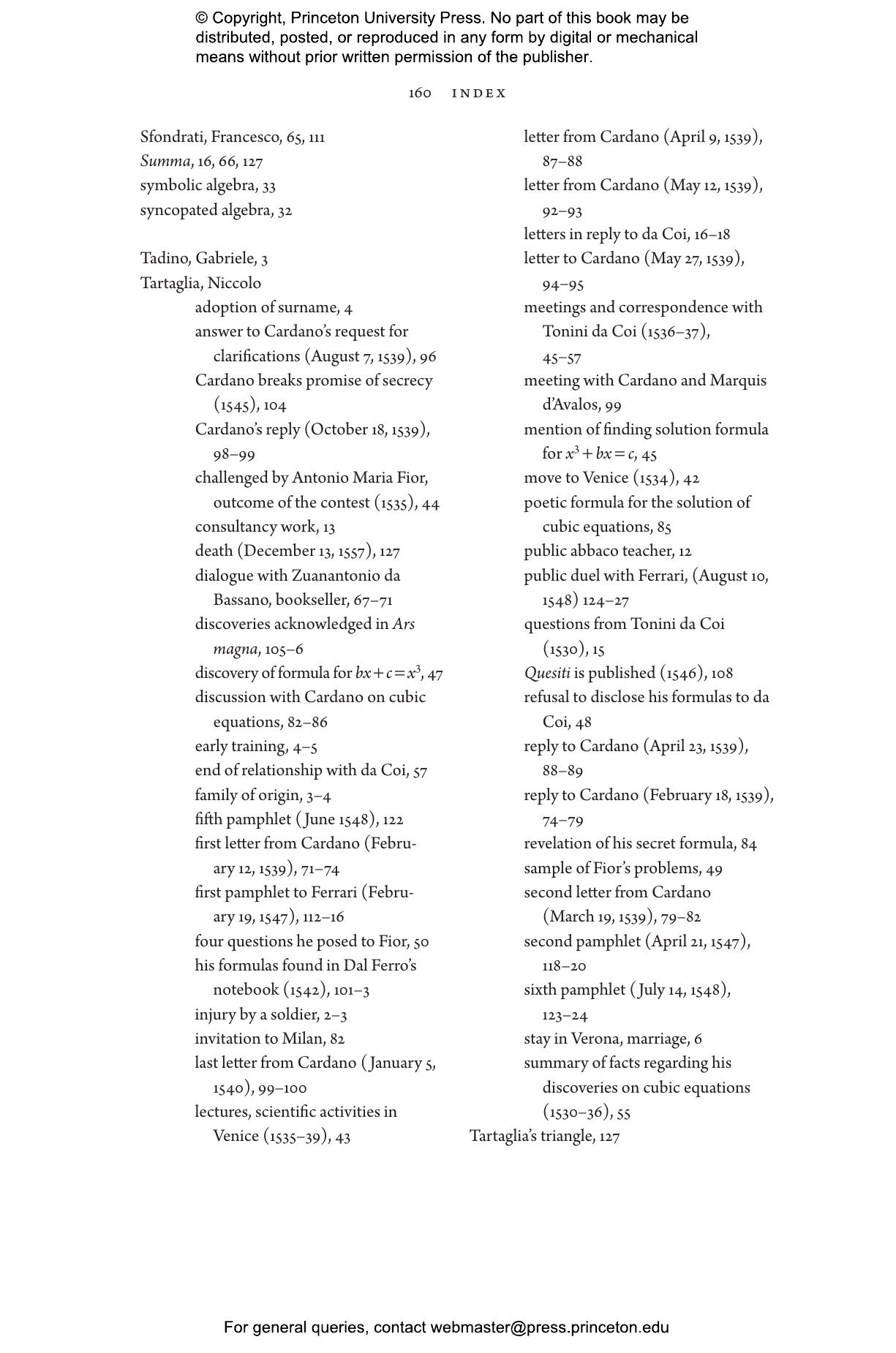 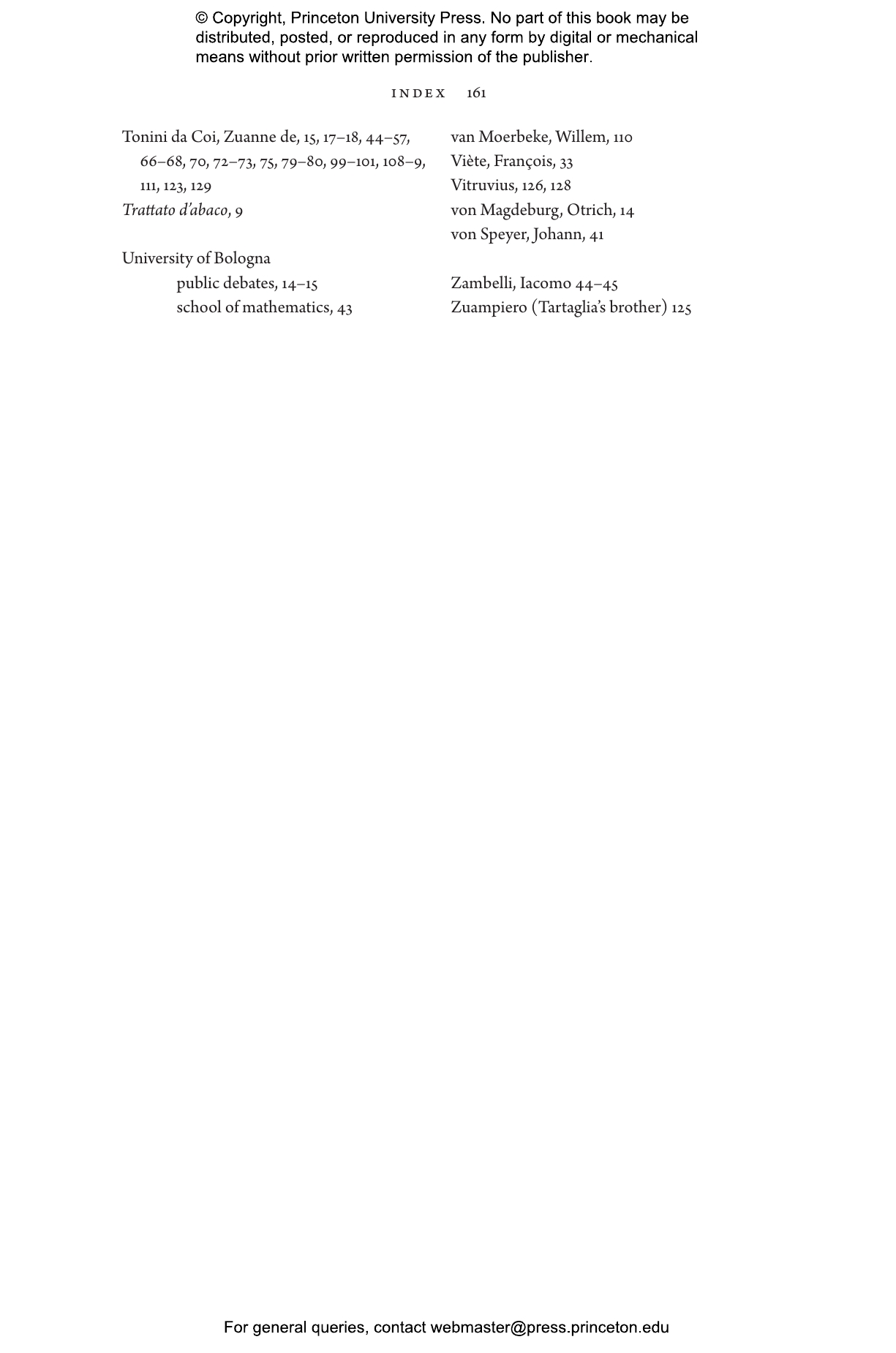 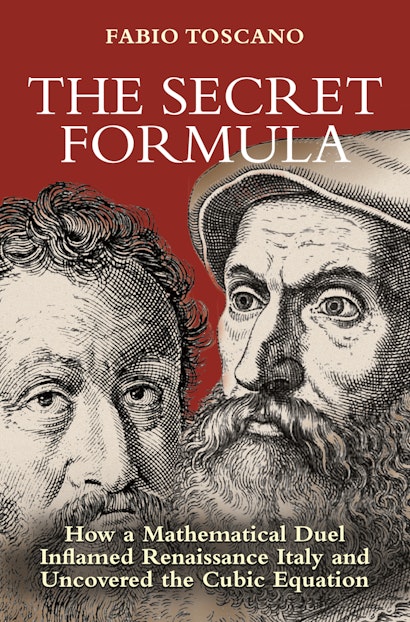 The Secret Formula tells the story of two Renaissance mathematicians whose jealousies, intrigues, and contentious debates led to the discovery of a formula for the solution of the cubic equation. Niccolò Tartaglia was a talented and ambitious teacher who possessed a secret formula—the key to unlocking a seemingly unsolvable, two-thousand-year-old mathematical problem. He wrote it down in the form of a poem to prevent other mathematicians from stealing it. Gerolamo Cardano was a physician, gifted scholar, and notorious gambler who would not hesitate to use flattery and even trickery to learn Tartaglia’s secret.

Set against the backdrop of sixteenth-century Italy, The Secret Formula provides new and compelling insights into the peculiarities of Renaissance mathematics while bringing a turbulent and culturally vibrant age to life. It was an era when mathematicians challenged each other in intellectual duels held outdoors before enthusiastic crowds. Success not only enhanced the winner’s reputation, but could result in prize money and professional acclaim. After hearing of Tartaglia’s spectacular victory in one such contest in Venice, Cardano invited him to Milan, determined to obtain his secret by whatever means necessary. Cardano’s intrigues paid off. In 1545, he was the first to publish a general solution of the cubic equation. Tartaglia, eager to take his revenge by establishing his superiority as the most brilliant mathematician of the age, challenged Cardano to the ultimate mathematical duel.

A lively and compelling account of genius, betrayal, and all-too-human failings, The Secret Formula reveals the epic rivalry behind one of the fundamental ideas of modern algebra.

Fabio Toscano is a science writer for newspapers and television and is the author of many popular science books.

"The yeast of the story has been told already many times, but it has never been told like Toscano does in this book."—Adhemar Bultheel, European Mathematical Society

"The cubic formula will always be beyond my grasp . . . but the story of its discovery and of the men who battled over it, so memorably recounted in The Secret Formula, is one I am glad to know."—Jeff Jacoby, The Boston Globe

"Toscano weaves together his sources deftly to make the story as lively and exciting as a novel, with mathematics an organic part of the tale."—MAA Reviews, Daniel J. Curtin

"Toscano is able to provide a realistic and accurate view that captures the complexity of the story of the cubic formula and the very different mathematical practices of this time. Anyone interested in learning about the history of mathematics will likely find it an interesting and informative read."—Patrick Love, London Mathematical Society Newsletter

"In this gripping story of a fundamental mathematical discovery, outrageous historical characters in Renaissance Italy battle both the cubic equation and each other. Loved it!"—Ian Stewart, author of Significant Figures: The Lives and Work of Great Mathematicians

"Set in the intellectually fecund era of the Italian High Renaissance, The Secret Formula reads like a captivating mystery novel. Toscano's story is endearing, poignant, and brilliantly told."—Bülent Atalay, author of Math and the Mona Lisa: The Art and Science of Leonardo da Vinci

"The solving of the cubic equation is one of the greatest tales in the history of mathematics, replete with rivalries, mathematical duels, sacred oaths, deceit, broken promises, insults, and flattery. Toscano takes us into the lives and actions of the eccentric and troubled geniuses in this juicy, Hollywood-worthy story."—David S. Richeson, author of Tales of Impossibility

"In sixteenth-century Italy, the discovery of the cubic formula ignited a fierce battle between Niccolò Tartaglia and Gerolamo Cardano. After I read this lively account of their combat, I could reach but one verdict: both mathematicians were guilty of ingenuity in the third degree."—William Dunham, author of The Calculus Gallery

"Few episodes in the history of mathematics are more dramatic than the sixteenth-century conflict between Tartaglia and Cardano over the solution to cubic equations. This beautifully written book lays out their story in exquisite detail."—David M. Bressoud, author of Calculus Reordered: A History of the Big Ideas

"Toscano tells an exciting story."—John Stillwell, author of Reverse Mathematics: Proofs from the Inside Out

"A good read. The Secret Formula is a useful volume for students and general readers who want to learn about the history of the cubic formula."—Victor J. Katz, coauthor of Taming the Unknown: A History of Algebra from Antiquity to the Early Twentieth Century