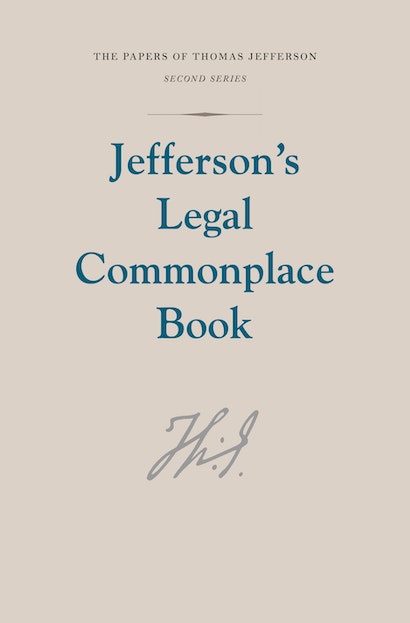 As a law student and young lawyer in the 1760s, Thomas Jefferson began writing abstracts of English common law reports. Even after abandoning his law practice, he continued to rely on his legal commonplace book to document the legal, historical, and philosophical reading that helped shape his new role as a statesman. Indeed, he made entries in the notebook in preparation for his mission to France, as president of the United States, and near the end of his life. This authoritative volume is the first to contain the complete text of Jefferson’s notebook. With more than 900 entries on such thinkers as Beccaria, Montesquieu, and Lord Kames, Jefferson’s Legal Commonplace Book is a fascinating chronicle of the evolution of Jefferson’s searching mind.

Jefferson’s abstracts of common law reports, most published here for the first time, indicate his deepening commitment to whig principles and his incisive understanding of the political underpinnings of the law. As his intellectual interests and political aspirations evolved, so too did the content and composition of his notetaking.

Unlike the only previous edition of Jefferson’s notebook, published in 1926, this edition features a verified text of Jefferson’s entries and full annotation, including essential information on the authors and books he documents. In addition, the volume includes a substantial introduction that places Jefferson’s text in legal, historical, and biographical context.