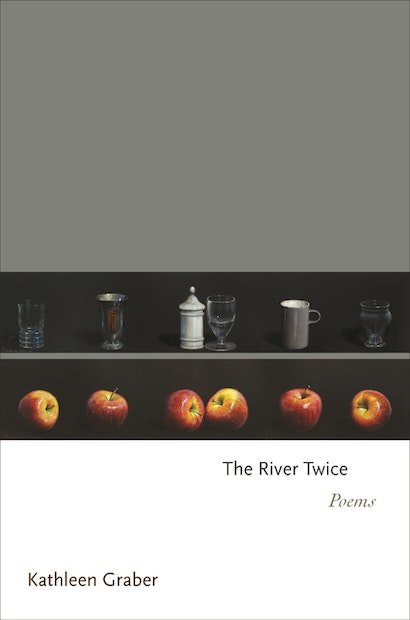 Taking its title from Heraclitus’s most famous fragment, The River Twice is an elegiac meditation on impermanence and change. The world presented in these poems is a fluid one in which so much—including space and time, the subterranean realm of dreams, and language itself—seems protean, as the speaker’s previously familiar understanding of the self and the larger systems around it gives way. Kathleen Graber’s poems wander widely, from the epistolary to the essayistic, shuffling the remarkable and unremarkable flotsam of contemporary life. One thought, one memory, one bit of news flows into the next. Yet, in a century devoted to exponentially increasing speed, The River Twice unfolds at the slow pace of a river bend. While the warm light of ideas and things flashes upon the surface, that which endures remains elusive—something glimpsed only for an instant before it is gone.

Kathleen Graber is the author of two previous collections of poetry, The Eternal City (Princeton), which was a finalist for the National Book Award and the National Book Critics Circle Award, and Correspondence. She is associate professor of English at Virginia Commonwealth University and lives in Powhatan, Virginia.

"I don’t know where this poet has been all my life, but I’ve certainly missed her — those long lines that float us through ache and love and quarrels. The only thing that parallels exquisite thought is the poem that carries it. Whether she’s picking up dog excrement or tasting a bitter peach or considering Mary Shelley, every word is placed exactly."—Grace Cavalieri, Washington Independent Review of Books

"Kathleen Graber takes readers on a fascinating, slow-motion journey in her splendid third book, The River Twice. Simple scenes or observations — watching pigeons build a nest or visiting a thrift shop — expand into rich meditations on change and impermanence . . . . Yet even as she contends with time, grief and fear for the planet, she brilliantly balances intelligence and heart, and never forgets the conscious act of looking for beauty"—Elizabeth Lund, The Washington Post

"[P]owerful and deeply convincing . . . [The River Twice] has an undeniable authenticity, not just in feeling but in form as well."—Bruce Whiteman, The Hudson Review

"Any admirer of Graber’s previous work will be familiar already with her penchant for using the words of others to throw doubt and tension into her own poems. With The River Twice, Graber introduces Heraclitus to a list of thinkers she’s wrestled with before: St. Augustine, Walter Benjamin, Marcus Aurelius, the list goes on. . . . [S]he’s at her best when she allows mystery’s presence into her poems."—Will Brebaker, Los Angeles Review of Books

"Borrowed from Heraclitus, the conundrum of stepping into the same river twice resonates anew in these poems, as [Kathleen] Graber examines the small tragedies witnessed close to home. . . . Her imagery burns too, from the esoteric to the mundane, all the while keeping pace with constant flow of river that washes us all along, sometimes above the surface, sometimes below."—Glen Young, Petoskey News

"Masterful self-portraits. . . . Graber’s natural yet erudite voice wanders elegantly in considerations of fluidity and impermanence as she evokes Heraclitus’s famous fragment, ‘You cannot step twice into the same river.’. . . . A remarkable tapestry of quotidian and transcendent life."—Henry Hughes, Harvard Review

"Even more powerful than the profound intelligence of Kathleen Graber's poetry is its wisdom, and its compassion for the many private and collective forms we singly and together take—forms like self, other, community, and nation. The River Twice is lyric philosophy, and a supreme consolation."—Tracy K. Smith, Poet Laureate of the United States and Pulitzer Prize-winning author of Life on Mars

"If your faith in poetry, or in the human species, has ever faltered, read these poems. If you have ever doubted that generosity of spirit and brilliance of intellect are inseparable virtues, read these poems. Kathleen Graber is one of the two or three finest poets working in America today; no one can surpass her for musicianship or moral penetration."—Linda Gregerson, author of Prodigal: New and Selected Poems, 1976–2014

Praise for Kathleen Graber's The Eternal City"Nothing short of a revelation. . . . If you only read one book of poetry this year, that's not enough, but start with this one."—Craig Morgan Teicher, Publishers Weekly"[An] outstanding collection. . . . These poems are like cherishable letters from a friend abroad. . . . Graber reminds one that poetry can be the most liberating form."—Kate Kellaway, The Observer"Serious poetry as inviting as an intimate conversation. See for yourself."—Meghan O’Rourke, NPR"[Graber's] careful balancing and sensitive descriptions often feel as refreshing as a cold drink on a hot summer day."—Elizabeth Lund, Washington Post