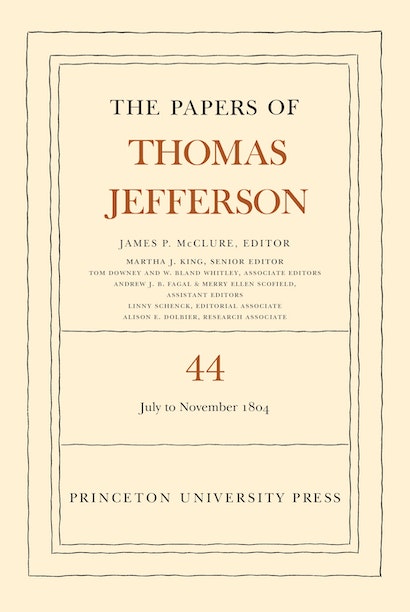 Buy This
Aaron Burr fells Alexander Hamilton in a duel in July, but Jefferson, caring little for either adversary or for disruptive partisan warfare, gives the event only limited notice. He contends with the problem of filling the offices necessary for the establishment of Orleans Territory on October 1. He is constrained by his lack of knowledge about potential officeholders. Meanwhile, a delegation with a memorial from disgruntled Louisianians travels to Washington. In August, the U.S. Mediterranean squadron bombards Tripoli. The United States has uneasy relationships around its periphery. Jefferson compiles information on British “aggressions” in American ports and waters, and drafts a bill to allow federal judges and state governors to call on military assistance when British commanders spurn civil authority. Another bill seeks to prevent merchant ships from arming for trade with Haiti. Contested claims to West Florida, access to the Gulf of Mexico, tensions along the Texas-Louisiana boundary, and unresolved maritime claims exacerbate relations with Spain. Jefferson continues his policy of pushing Native American nations to give up their lands east of the Mississippi River. Yellow fever has devastating effects in New Orleans. Abigail Adams terminates the brief revival of their correspondence, musing that “Affection still lingers in the Bosom, even after esteem has taken its flight.” In November, Jefferson delivers his annual message to Congress. He also commences systematic records to manage his guest lists for official dinners.
James P. McClure, senior research historian at Princeton University, is general editor of the Papers of Thomas Jefferson.