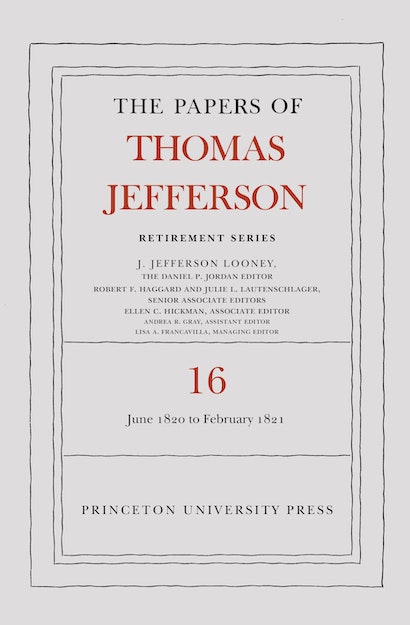 Buy This
This volume’s 571 documents cover both Jefferson’s opposition to restrictions on slavery in Missouri and his concession that “the boisterous sea of liberty is never without a wave.” Seeking support for the University of Virginia, he fears that southerners who receive New England educations will return with northern values. Calling it “the Hobby of my old age,” Jefferson envisions an institution dedicated to “the illimitable freedom of the human mind.” He infers approvingly from revolutionary movements in Europe and South America that “the disease of liberty is catching.” Constantine S. Rafinesque addresses three public letters to Jefferson presenting archaeological research on Kentucky’s Alligewi Indians, and Jefferson circulates a Nottoway-language vocabulary. Early in 1821 he cites declining health and advanced age as he turns over the management of his Monticello and Poplar Forest plantations to his grandson Thomas Jefferson Randolph. In discussions with trusted correspondents, Jefferson admires Jesus’s morality while doubting his miracles, discusses the materiality of the soul, and shares his thoughts on Unitarianism. Reflecting on the dwindling number of their old friends, he tells Maria Cosway that he is like “a solitary trunk in a desolate field, from which all it’s former companions have disappeared.”
J. Jefferson Looney is the Daniel P. Jordan Editor of the Papers of Thomas Jefferson at Monticello. The Retirement Series is sponsored by the Thomas Jefferson Foundation, Inc., Charlottesville, Virginia.