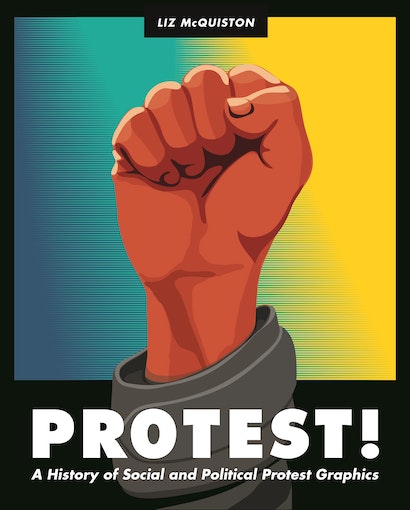 Throughout history, artists and citizens have turned to protest art as a means of demonstrating social and political discontent. From the earliest broadsheets in the 1500s to engravings, photolithographs, prints, posters, murals, graffiti, and political cartoons, these endlessly inventive graphic forms have symbolized and spurred on power struggles, rebellions, spirited causes, and calls to arms. Spanning continents and centuries, Protest! presents a major new chronological look at protest graphics.

Beginning in the Reformation, when printed visual matter was first produced in multiples, Liz McQuiston follows the iconic images that have accompanied movements and events around the world. She examines fine art and propaganda, including William Hogarth’s Gin Lane, Thomas Nast’s political caricatures, French and British comics, postcards from the women’s suffrage movement, clothing of the 1960s counterculture, the anti-apartheid illustrated book How to Commit Suicide in South Africa, the “Silence=Death” emblem from the AIDS crisis, murals created during the Arab Spring, electronic graphics from Hong Kong’s Umbrella Revolution, and the front cover of the magazine Charlie Hebdo. Providing a visual exploration both joyful and brutal, McQuiston discusses how graphics have been used to protest wars, call for the end to racial discrimination, demand freedom from tyranny, and satirize authority figures and regimes.

From the French, Mexican, and Sandinista revolutions to the American civil rights movement, nuclear disarmament, and the Women’s March of 2017, Protest! documents the integral role of the visual arts in passionate efforts for change.

A look inside Protest!: A History of Social and Political Protest Graphics

Liz McQuiston is a graphic designer and independent scholar. She has served as the head of the Department of Graphic Art and Design at the Royal College of Art, and her many books include Visual Impact: Creative Dissent in the 21st Century, Graphic Agitation 2: Social and Political Graphics in the Digital Age, and Suffragettes to She-Devils: Women’s Liberation and Beyond.

"Liz McQuiston's Protest! encompasses an astounding breadth of emotion – from hilarious satire to utter horror. It highlights the timeless iconography of protest graphics, such as raised fists, skulls (and skeletons), mushroom clouds and missiles, and revels in the variety of its modus operandi: from posters and postcards to giant inflatables. But over and above all, this book pays tribute to the liberating concept of hard-won 'freedom of speech' throughout history, and which still has agency in current times. . . . The power struggles of the past, and their visual communication, have meaning for us now. Such resonances occur, again and again, throughout this entire collection."—Elisabeth Woronzoff, Pop Matters

"Showing the conceptual breadth and visual diversity of protest graphics through the centuries, Protest! offers a degree of comprehensiveness and scholarly depth not available elsewhere."—Stephen J. Eskilson, author of Graphic Design: A New History