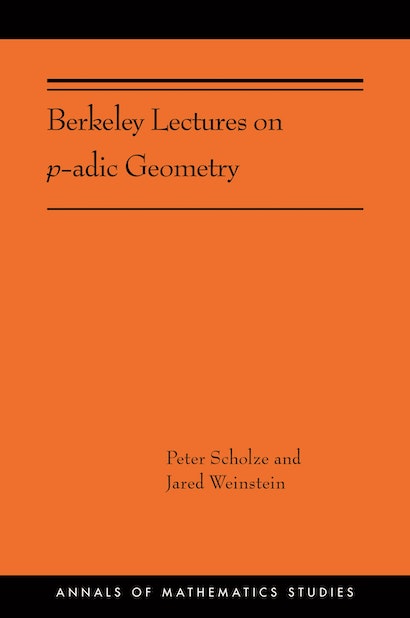 Berkeley Lectures on p-adic Geometry presents an important breakthrough in arithmetic geometry. In 2014, leading mathematician Peter Scholze delivered a series of lectures at the University of California, Berkeley, on new ideas in the theory of p-adic geometry. Building on his discovery of perfectoid spaces, Scholze introduced the concept of “diamonds,” which are to perfectoid spaces what algebraic spaces are to schemes. The introduction of diamonds, along with the development of a mixed-characteristic shtuka, set the stage for a critical advance in the discipline. In this book, Peter Scholze and Jared Weinstein show that the moduli space of mixed-characteristic shtukas is a diamond, raising the possibility of using the cohomology of such spaces to attack the Langlands conjectures for a reductive group over a p-adic field.

This book follows the informal style of the original Berkeley lectures, with one chapter per lecture. It explores p-adic and perfectoid spaces before laying out the newer theory of shtukas and their moduli spaces. Points of contact with other threads of the subject, including p-divisible groups, p-adic Hodge theory, and Rapoport-Zink spaces, are thoroughly explained. Berkeley Lectures on p-adic Geometry will be a useful resource for students and scholars working in arithmetic geometry and number theory.

Peter Scholze is a professor at the University of Bonn and director of the Max Planck Institute for Mathematics. Jared Weinstein is associate professor of mathematics at Boston University.