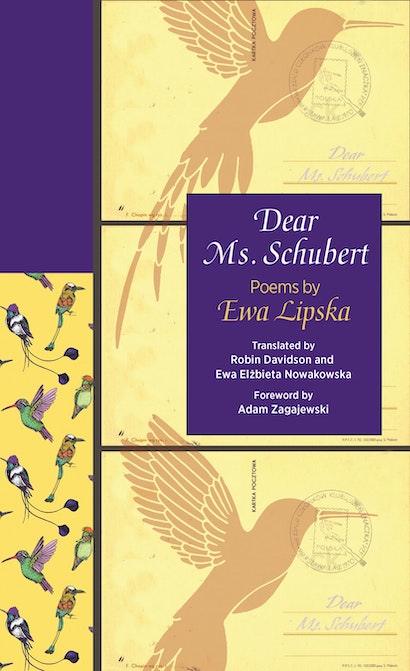 Ewa Lipska is one of Europe’s most compelling and important poets, but relatively little of her recent work has been translated into English. A Polish-English bilingual edition, Dear Ms. Schubert is the first complete collection of her remarkable poetic postcards addressed to “Ms. Schubert,” a mysterious contemporary European everywoman.

Featuring the original Polish text and the English translation on facing pages, Dear Ms. Schubert is a highly original and appealing book from a poet who richly deserves a wide English-language readership.

Ewa Lipska was born in Kraków, Poland, in 1945. She is the author of more than thirty books of poetry and has won many awards, including the Polish PEN Club’s Robert Graves Award for lifetime achievement in poetry. Her poems have been translated into more than fifteen languages. Robin Davidson is a poet, translator, and professor emeritus of literature and creative writing at the University of Houston–Downtown. Twitter @RobinDavidsonr Ewa Elżbieta Nowakowska is a poet, short-story writer, and translator who lives and teaches in Kraków. Davidson and Nowakowska are also the translators of a previous collection of Lipska’s poetry, The New Century.

"Dear Ms. Schubert is an admirable addition to international literature, a gift to the English-speaking world."—L. Ali Khan, NY Journal of Books

"Readers lucky enough to find themselves immersed in the poems [in Dear Ms. Schubert] will discover a lovely garden of delights…The poems, in a confident translation by Robin Davidson and Ewa Elżbieta Nowakowska, are pleasant to read…clever and startling. —Kyle Torke, Colorado Review"

"The fascinating puzzle Lipska has put in front of us continues with the blurring of the boundary between prose and poetry. According to Lipska herself, the poems were written as prose postcards, and indeed only the poems of Dear Ms. Schubert are set as free verse poems. This is a revolutionary act, a democratization that anchors poetry in spoken and written nonliterary texts and gives it the rhythm of breathing; its speaker/writer perceives the world in a particular, poetic rhythm."—Alice-Catherine Carls, World Literature Today

“This poetry jumps and leaps and runs.”—from the foreword by Adam Zagajewski

“Ewa Lipska is a poet of the first importance. Her signature style—terse, witty, with images that turn on a dime—is unmistakable. The translations in Dear Ms. Schubert succeed in conveying her controlled, understated tone, her playfulness, and her ability to astonish with a single unexpected image or word.”—Bill Johnston, Indiana University Bloomington

“Ewa Lipska doesn’t just use words in these terse and ironic poems—she also listens to how politicians, marketing executives, and so-called ordinary folk use them to express their fears and desires. This makes her both uncompromising and generous. Born ‘in a downpour of uncertainty,’ these magnificently translated poems engage with the present moment without losing sight of the timelessness of human kindness and love.”—Piotr Florczyk, author of East & West and From the Annals of Kraków