A definitive scholarly edition of the retirement papers of Thomas Jefferson 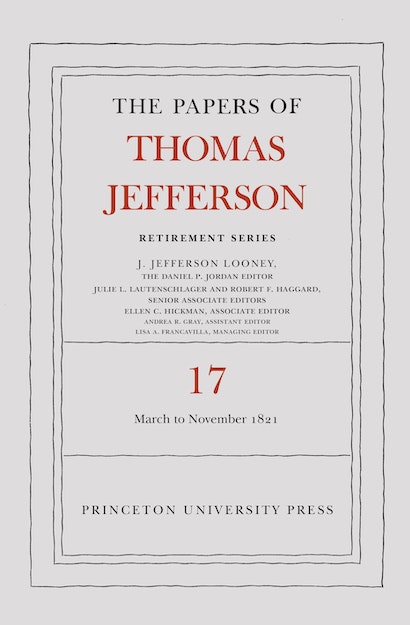 The 612 documents in this volume include Jefferson’s notes on his early career, one of the lengthiest documents of his retirement. Often misleadingly called his autobiography, the text describes Jefferson’s experience as an American revolutionary, a legislator shaping and revising Virginia’s laws, and a United States diplomat in France as its own revolution neared.

Jefferson sits for a portrait by Thomas Sully commissioned for West Point. He takes the unusual step of allowing his recommendation of a book by John Taylor to be published, insuring a wide circulation of Jefferson’s views on the proper balance between state and federal powers. In a private letter he asserts that the federal judiciary is amassing overarching power, “ever acting, with noiseless foot, & unalarming advance, gaining ground step by step, and holding what it gains.” Jefferson receives a description of an African American commemoration of the nation’s 1807 ban on the importation of slaves.

Jefferson advises that the opening of the University of Virginia is not imminent even as he oversees its construction and defends the high cost, stating as his goal, “to do, not what was to perish with ourselves, but what would remain, be respected and preserved thro’ other ages.”