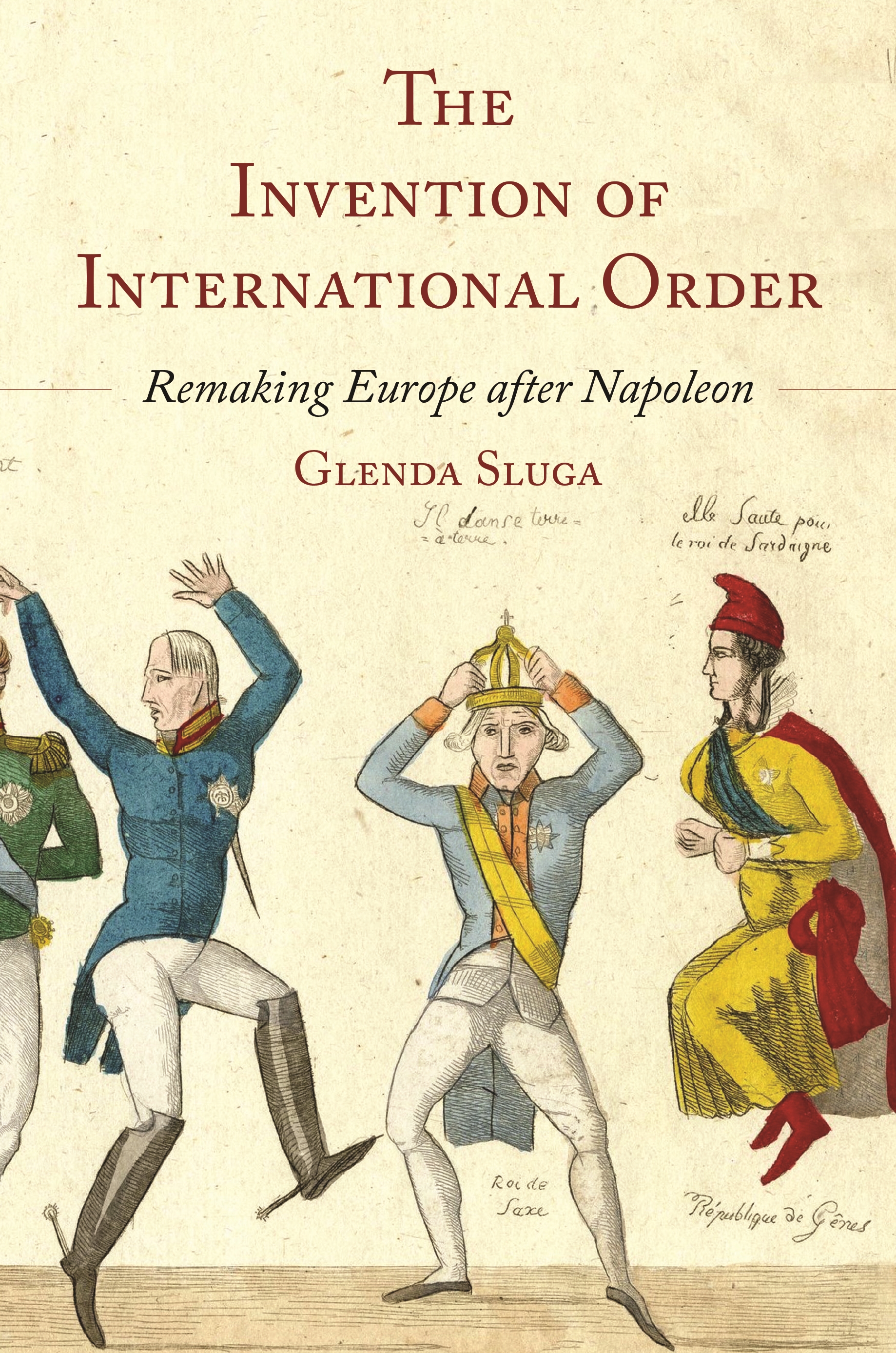 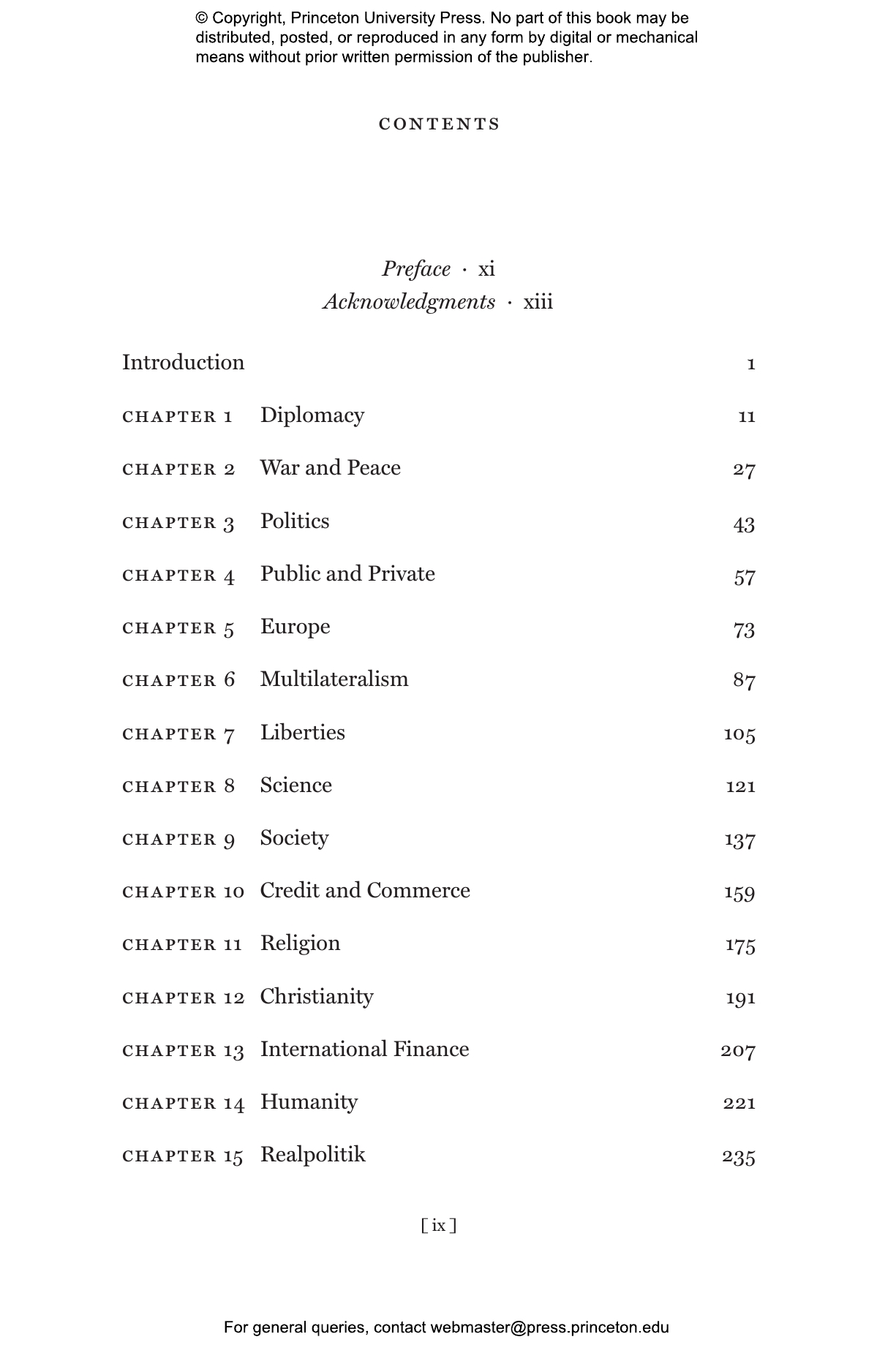 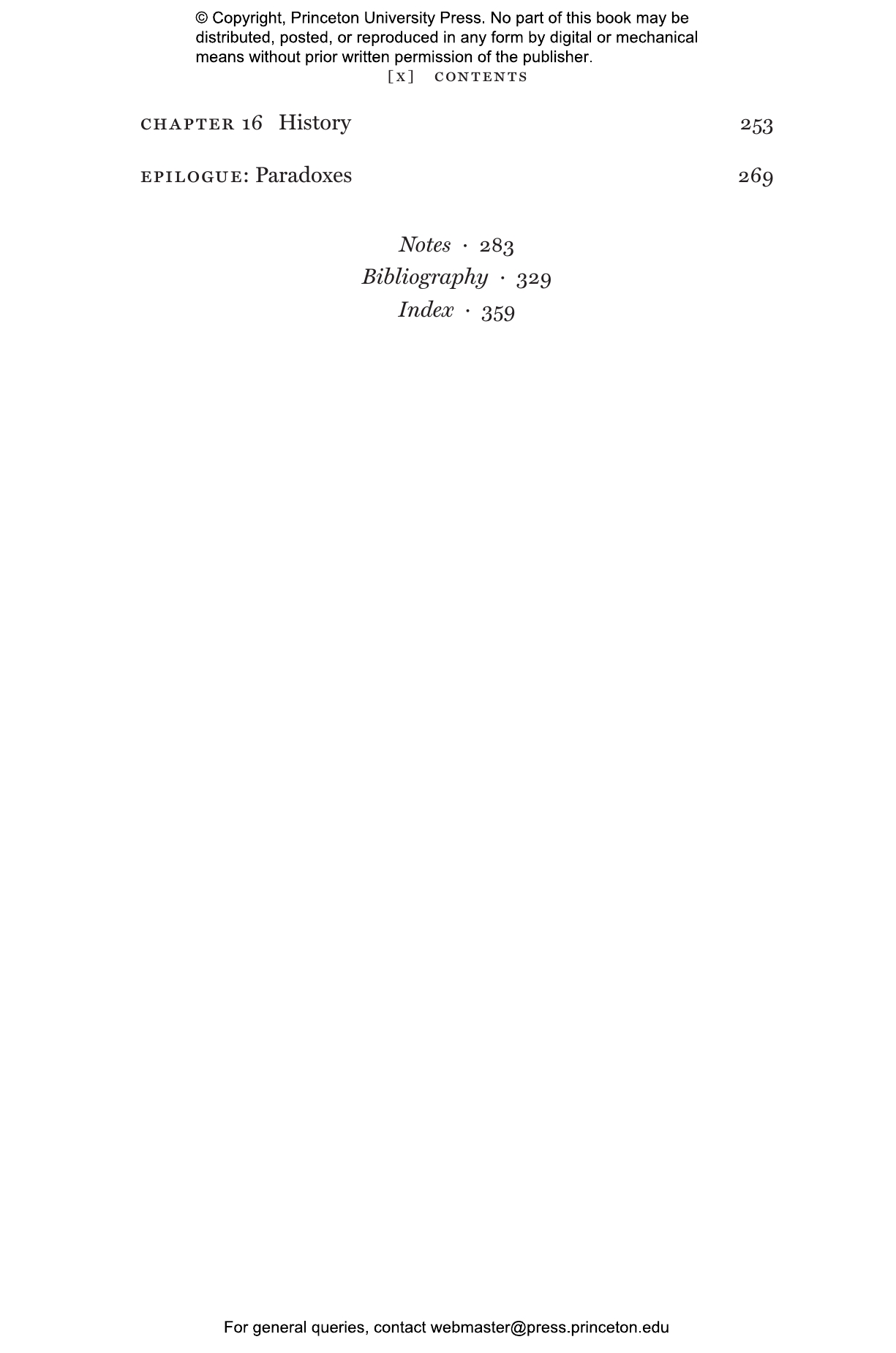 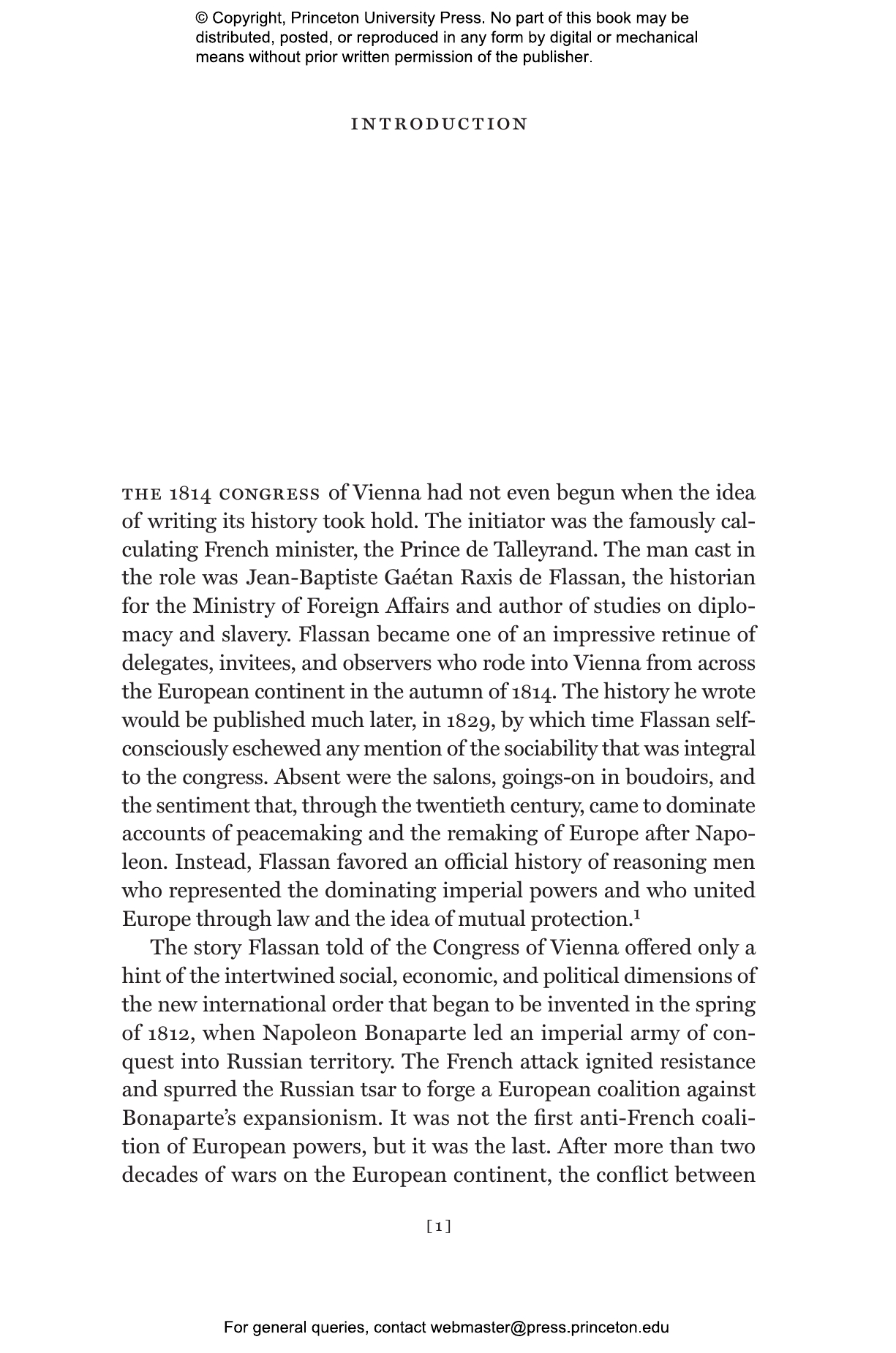 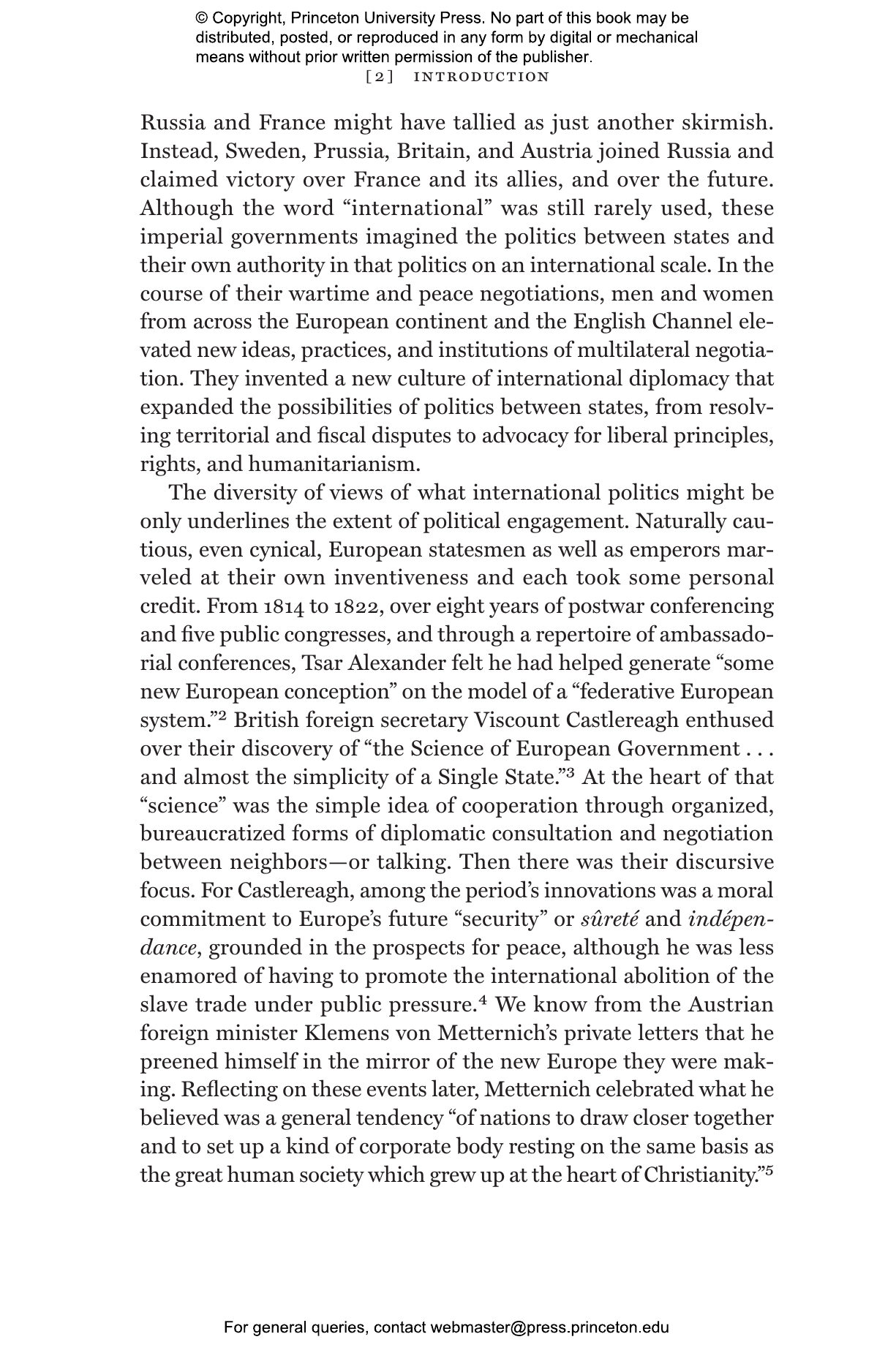 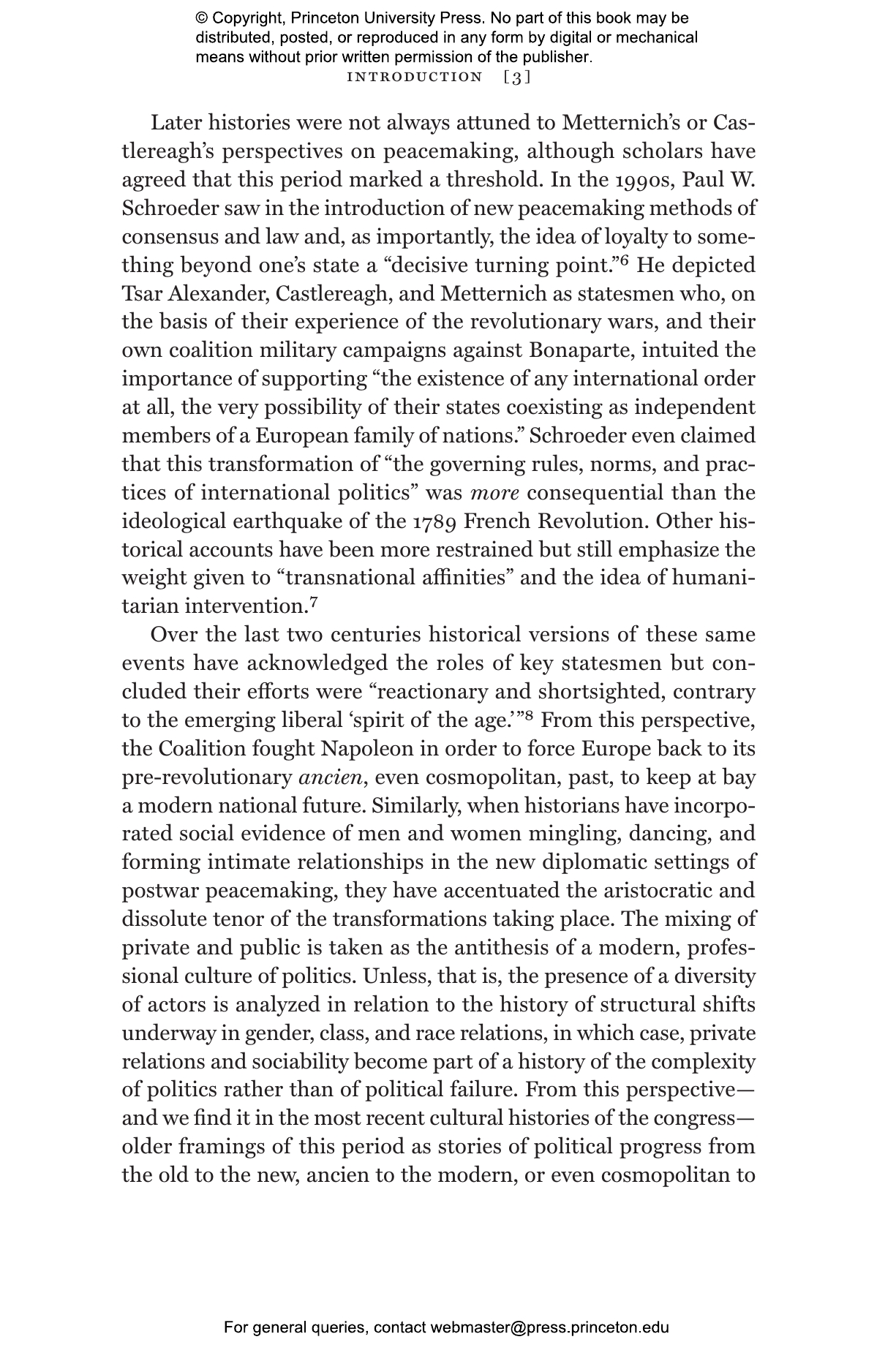 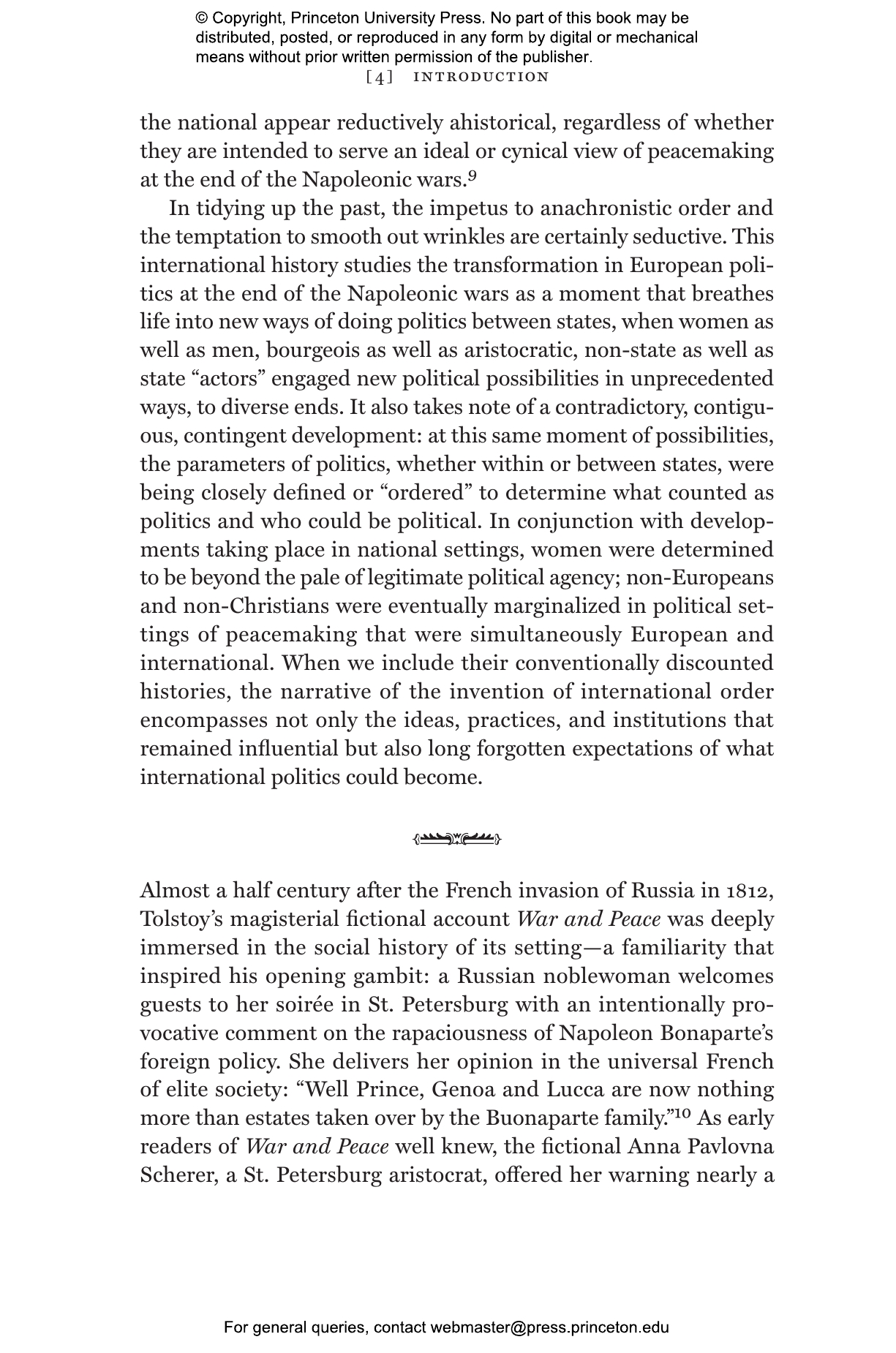 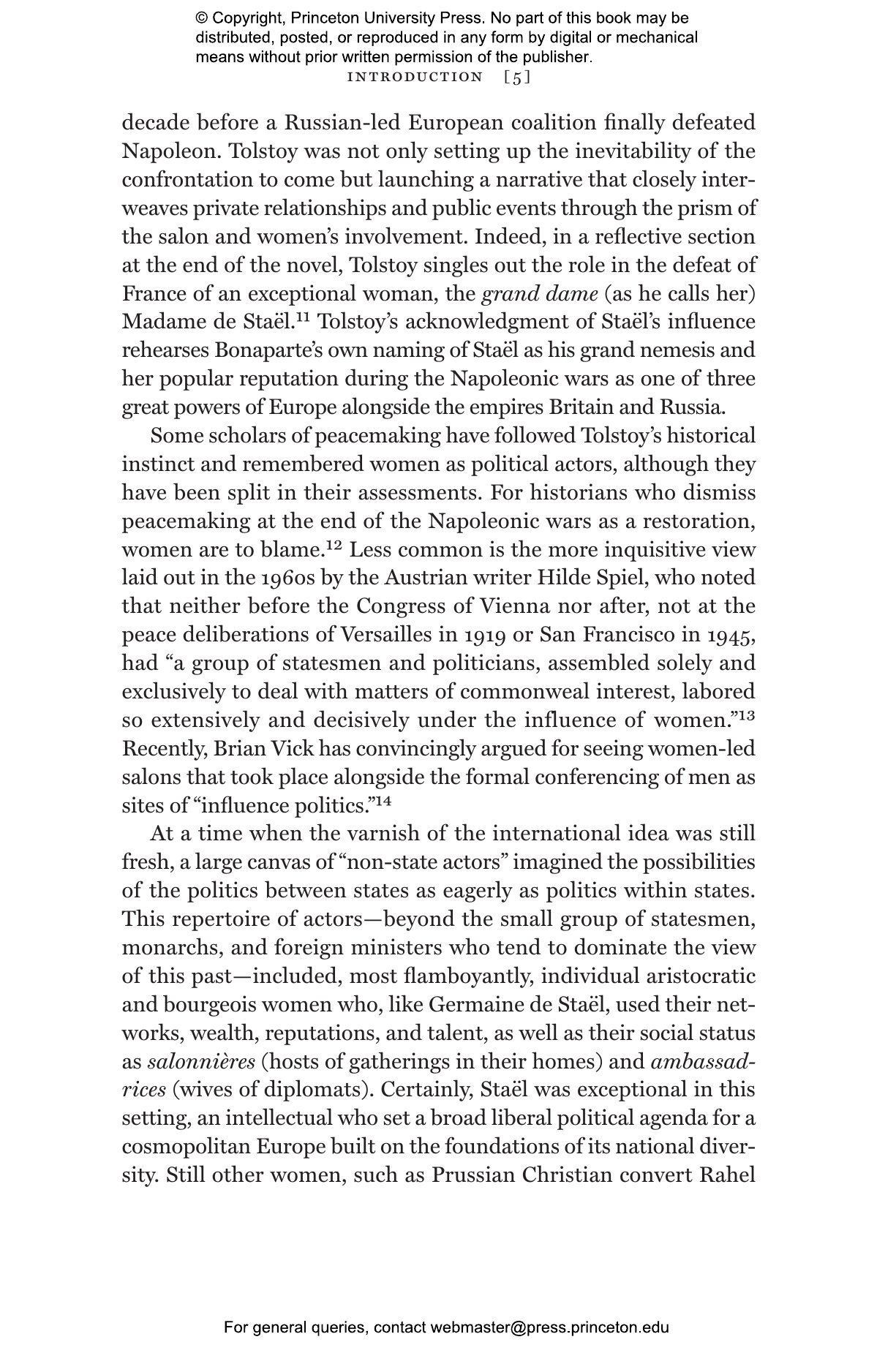 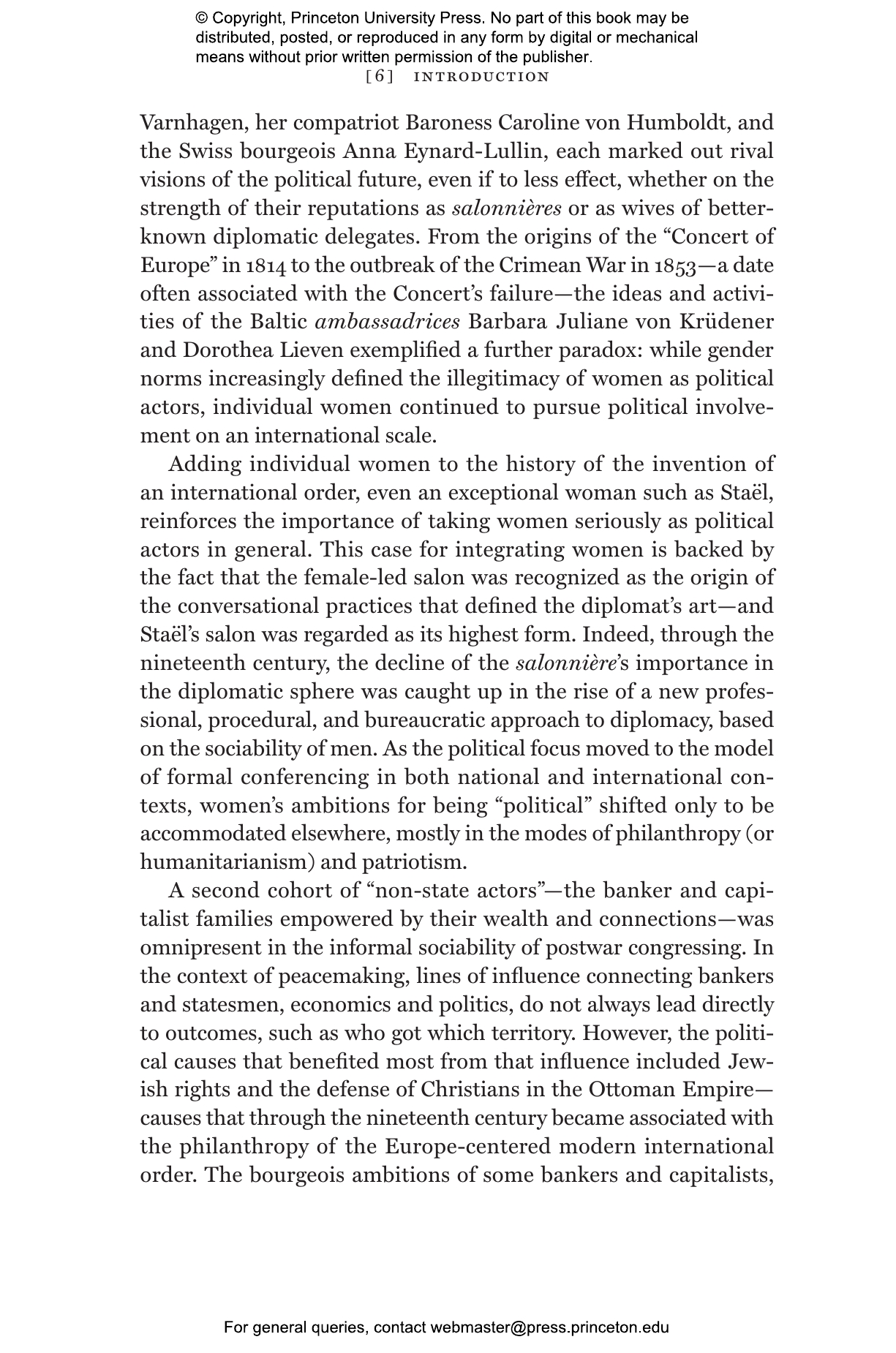 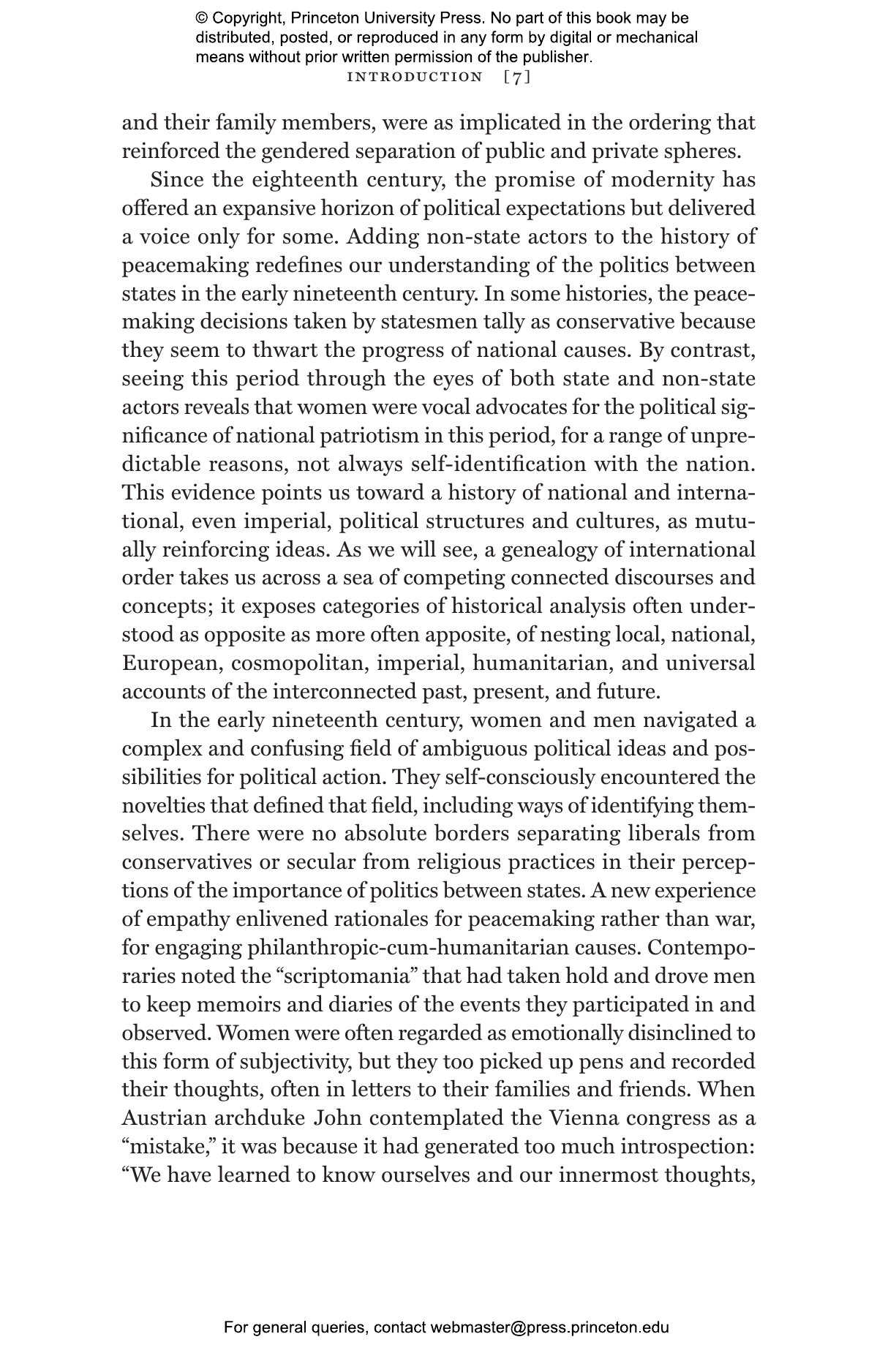 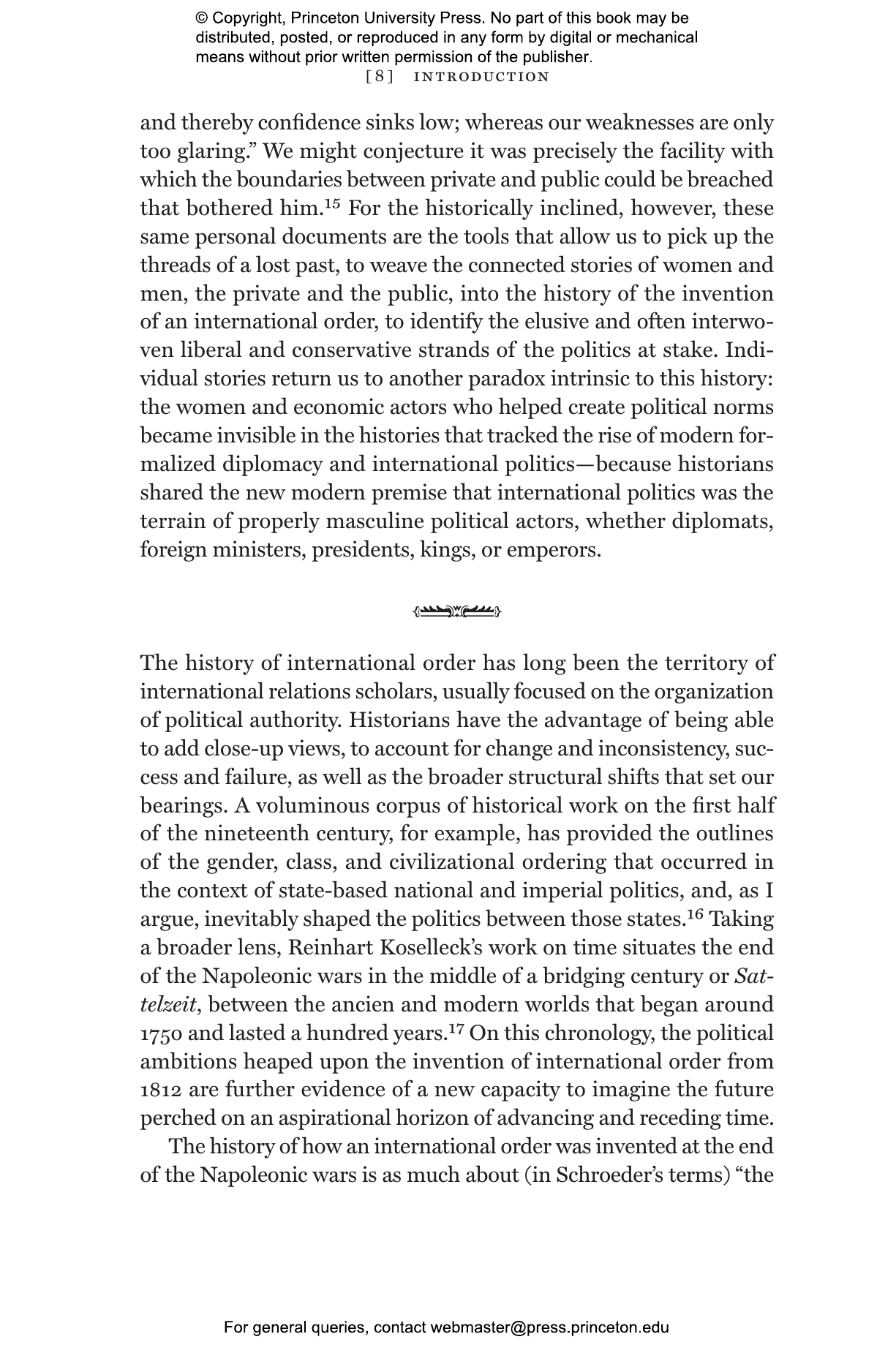 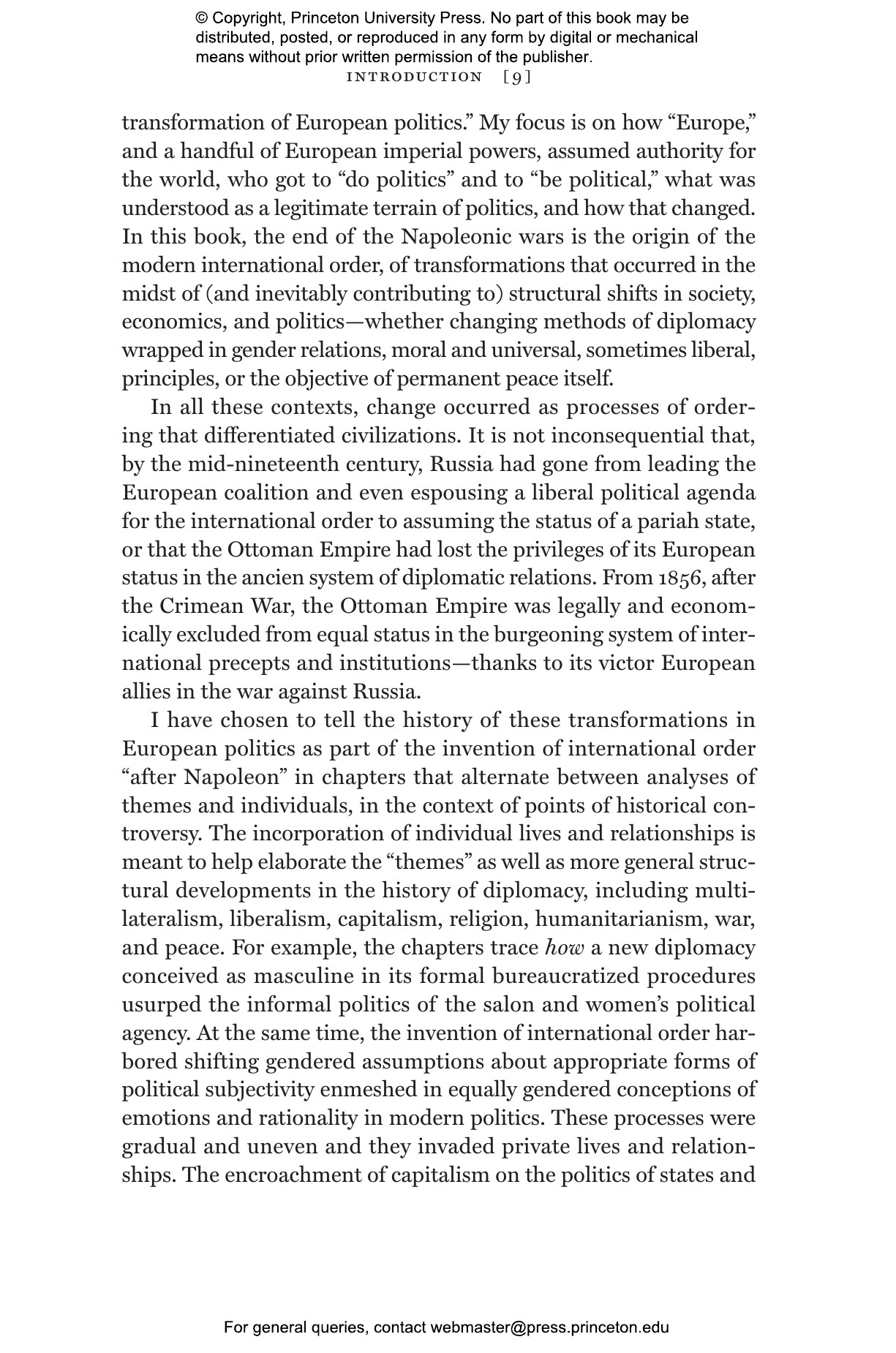 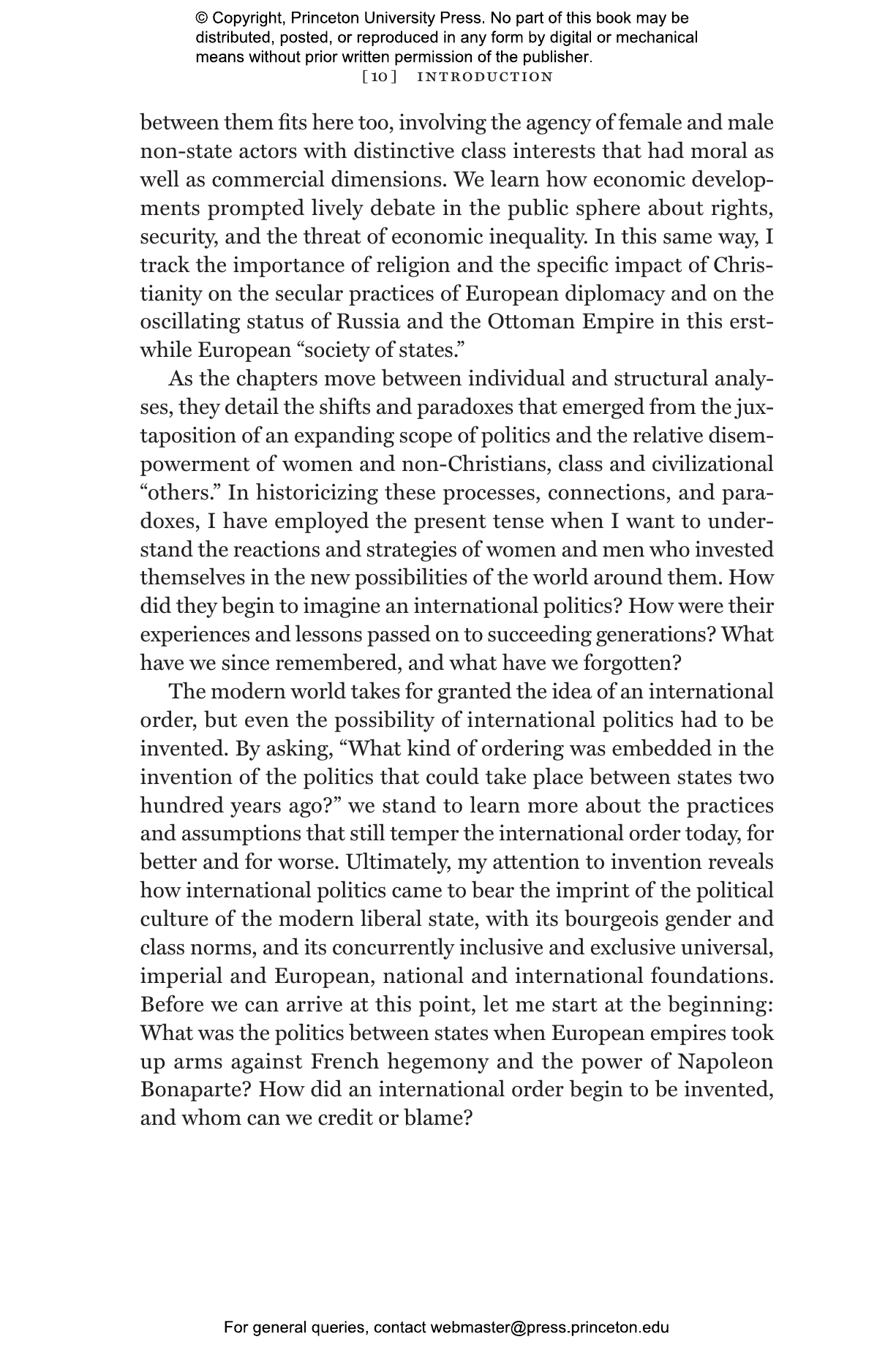 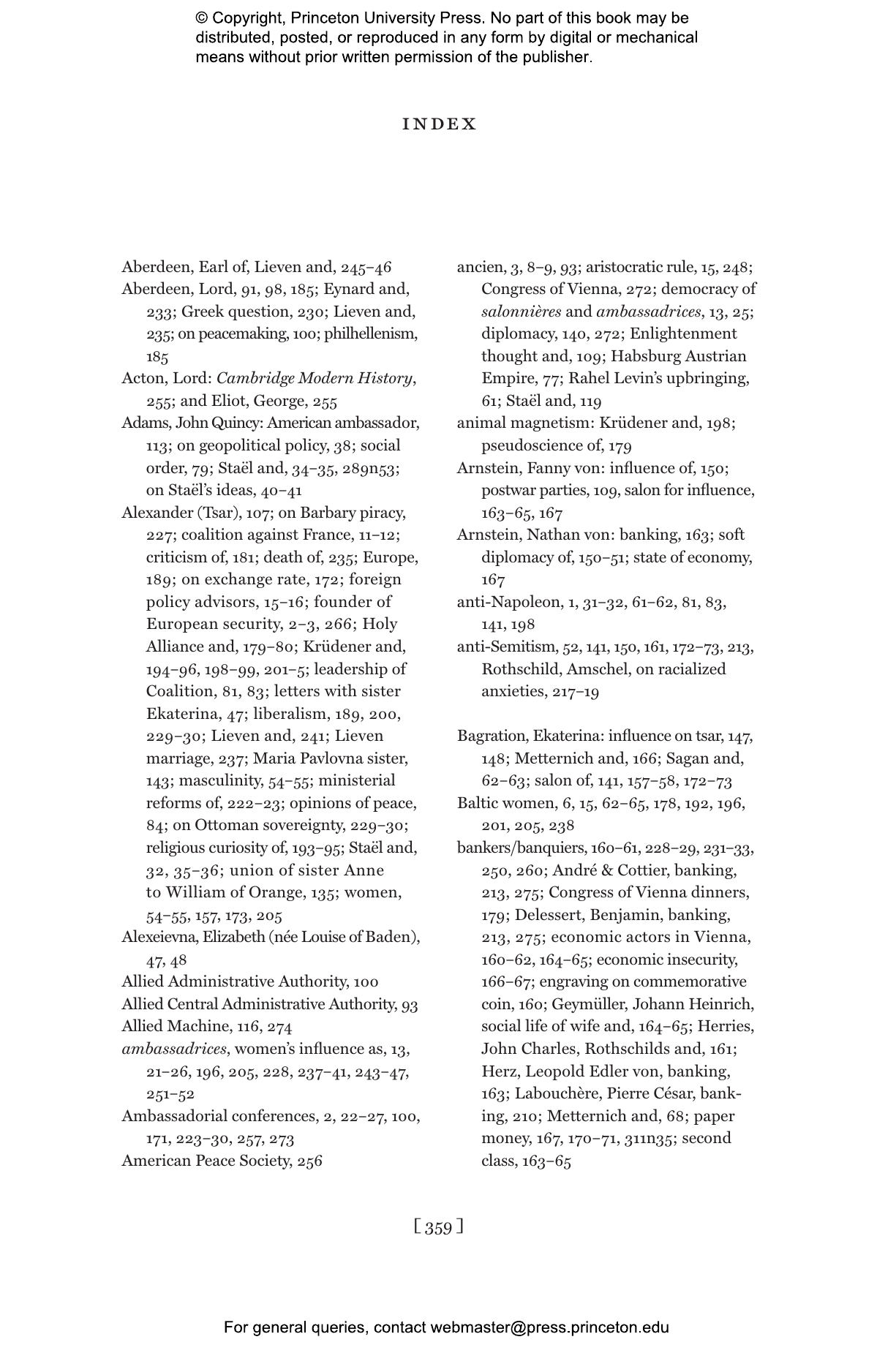 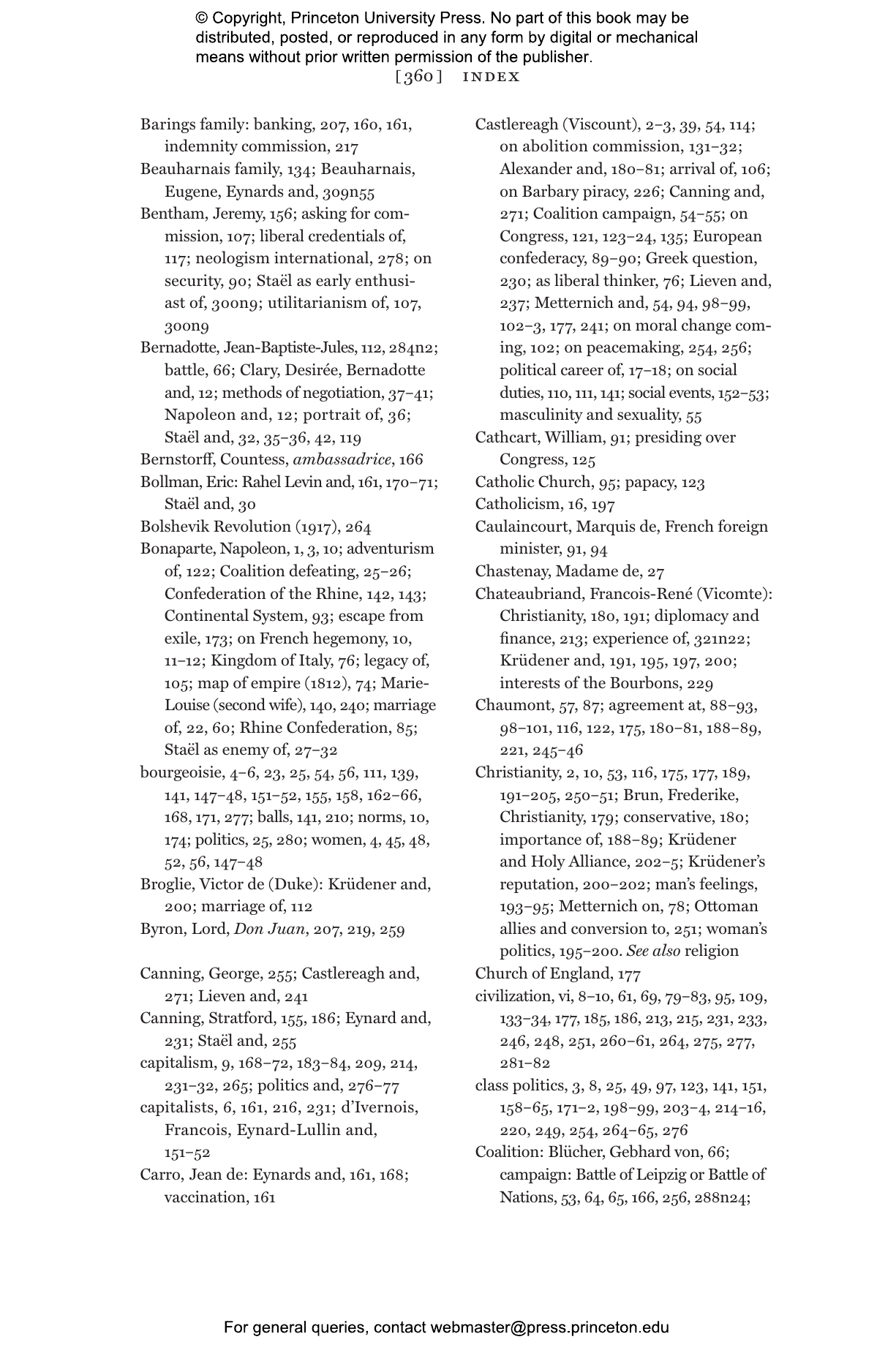 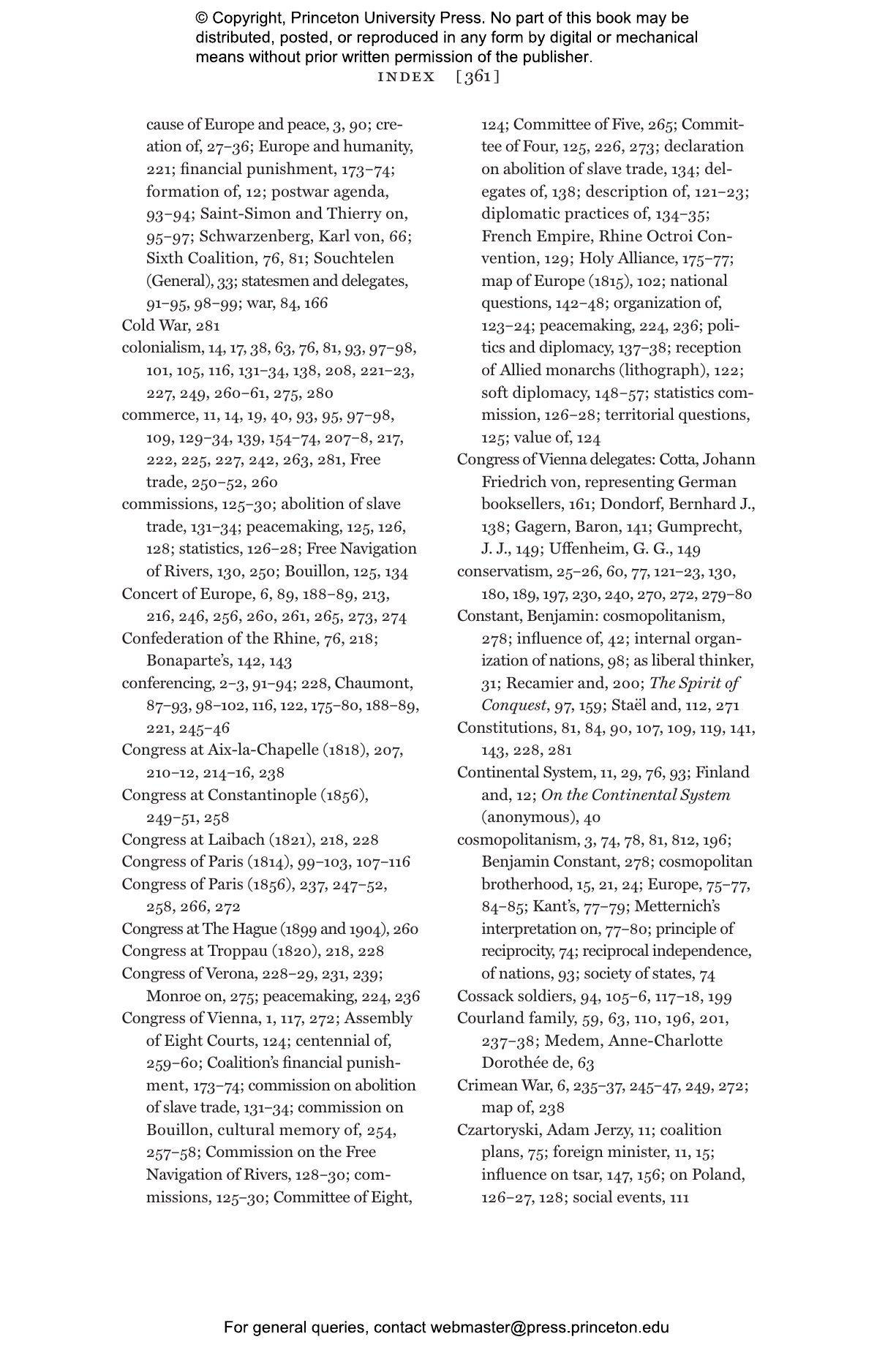 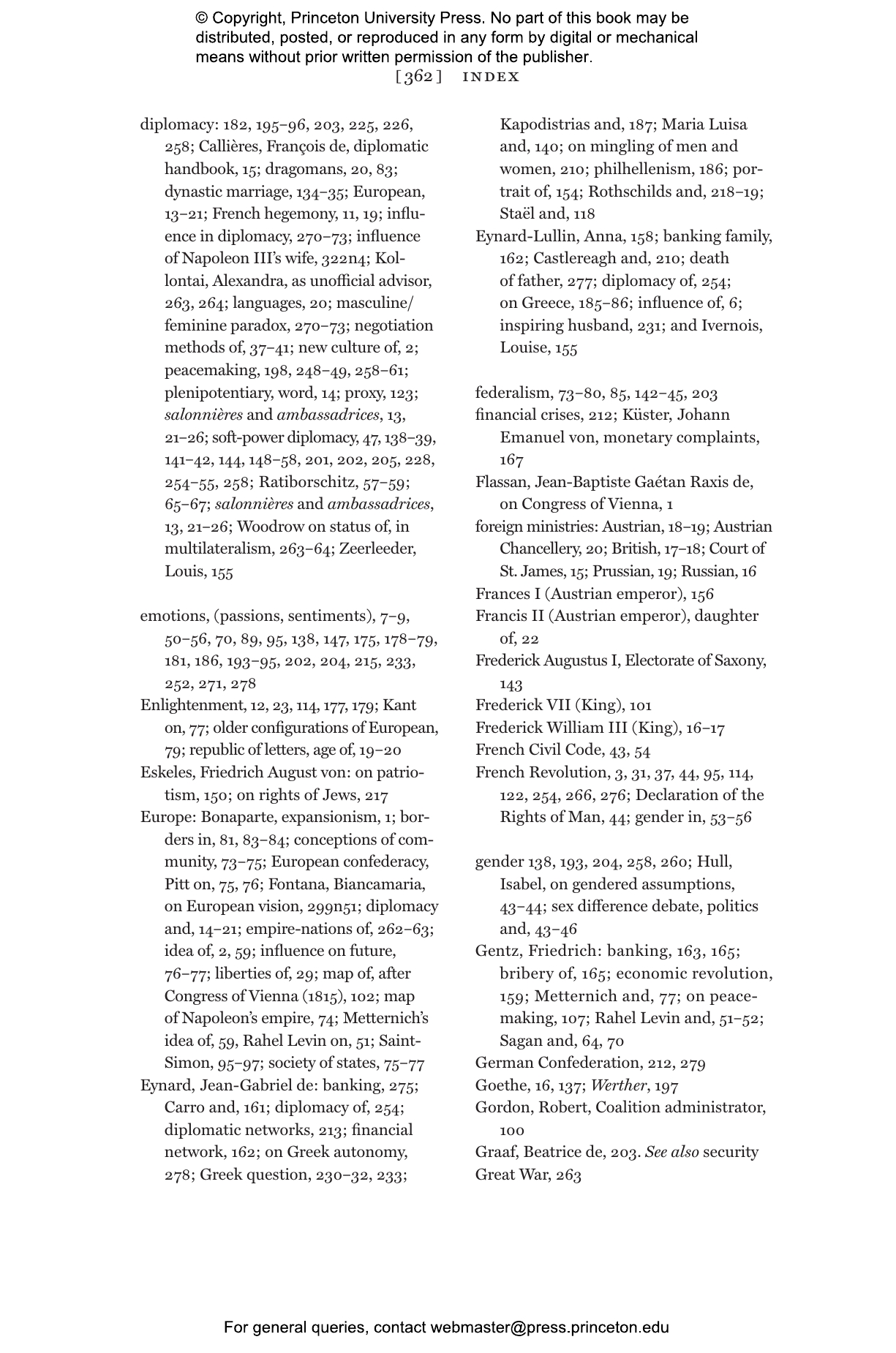 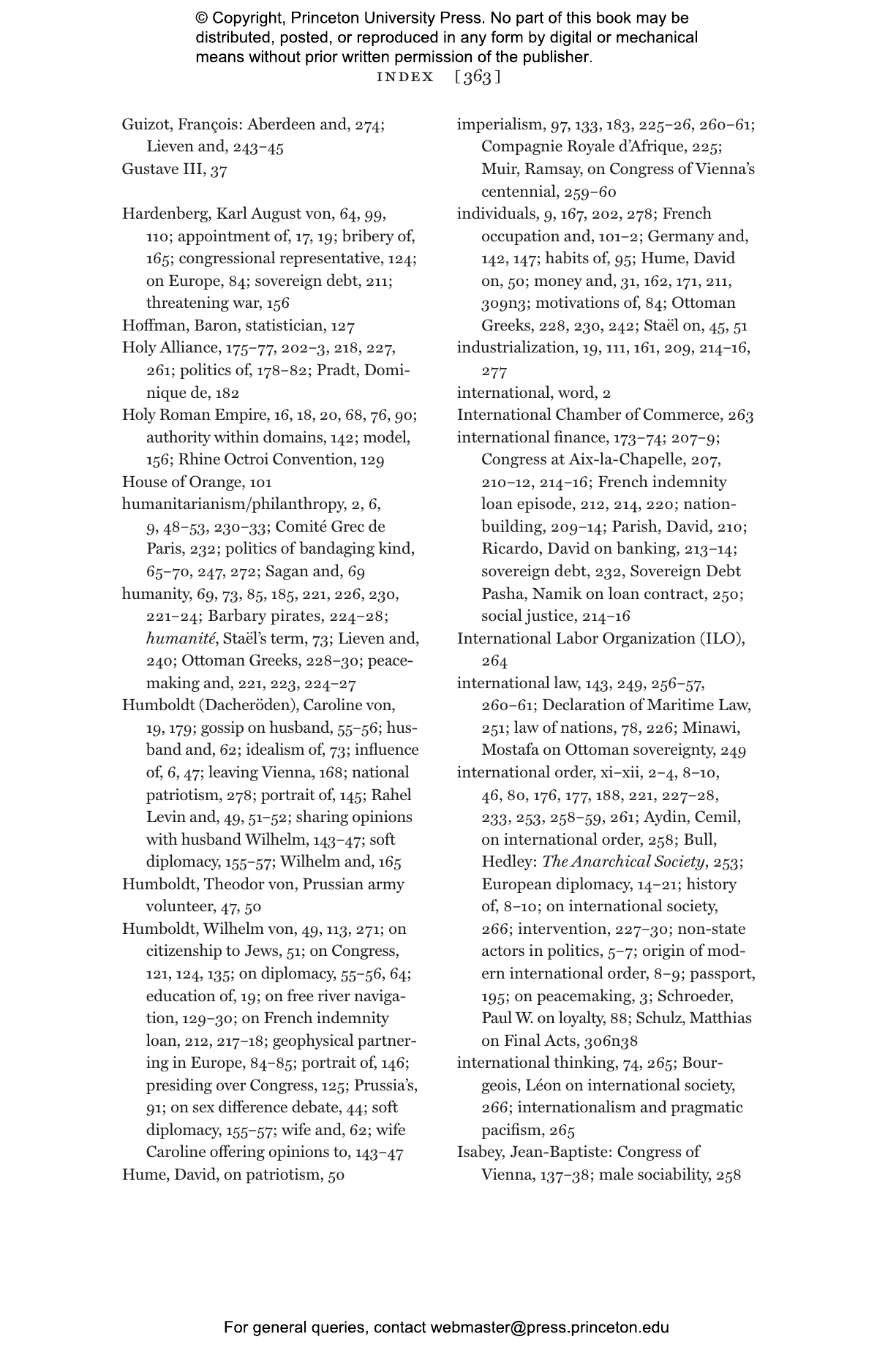 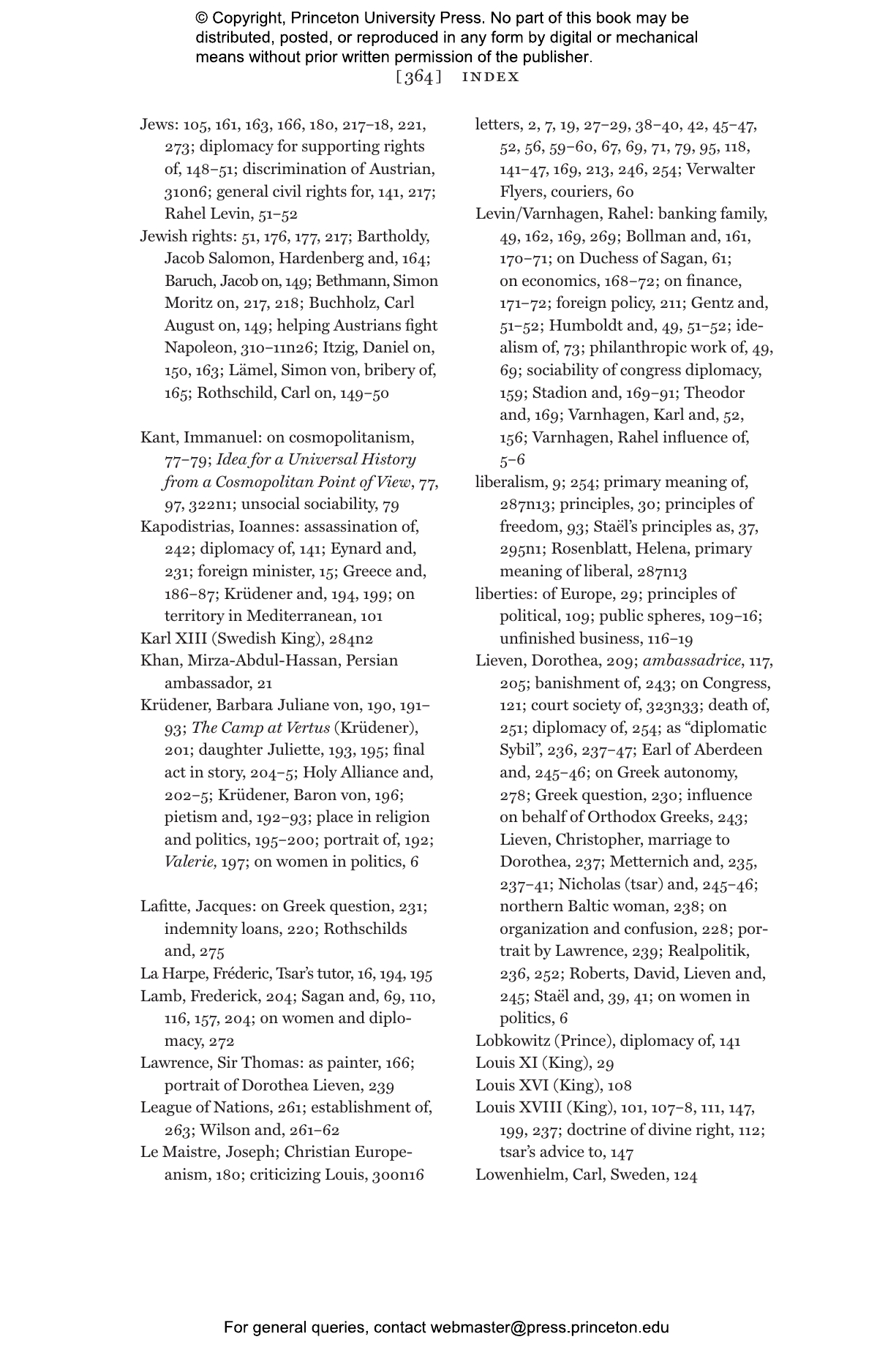 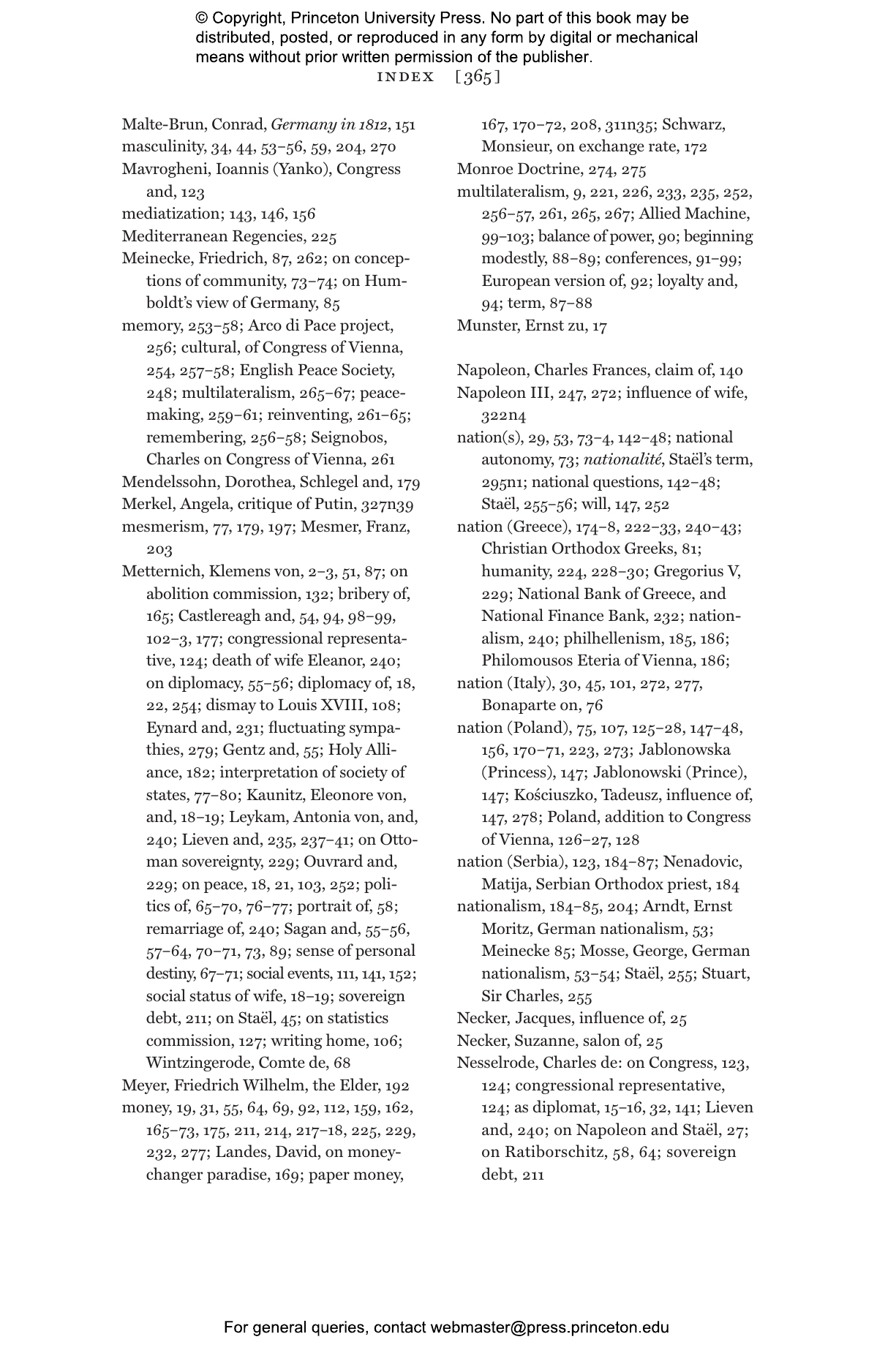 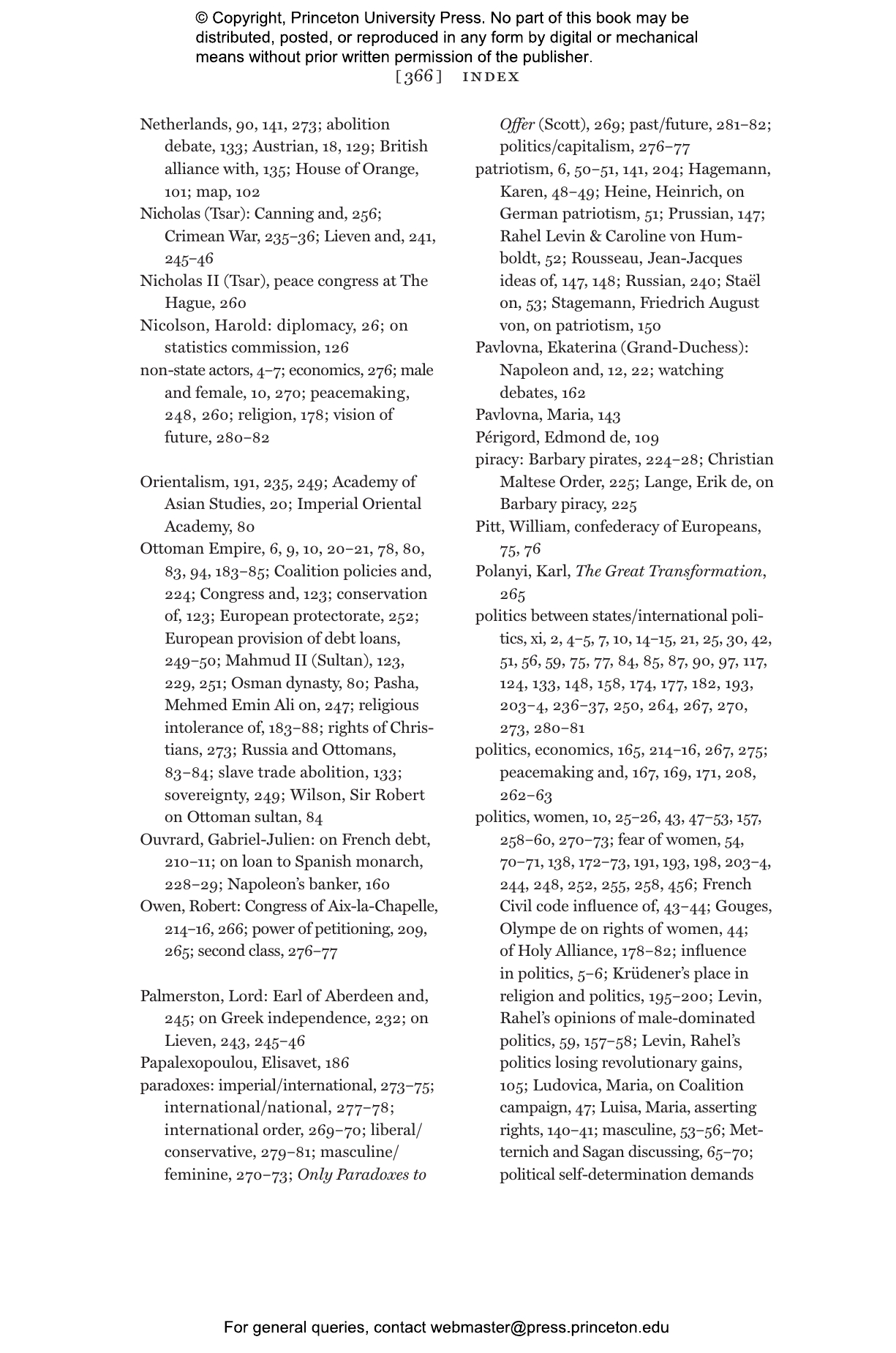 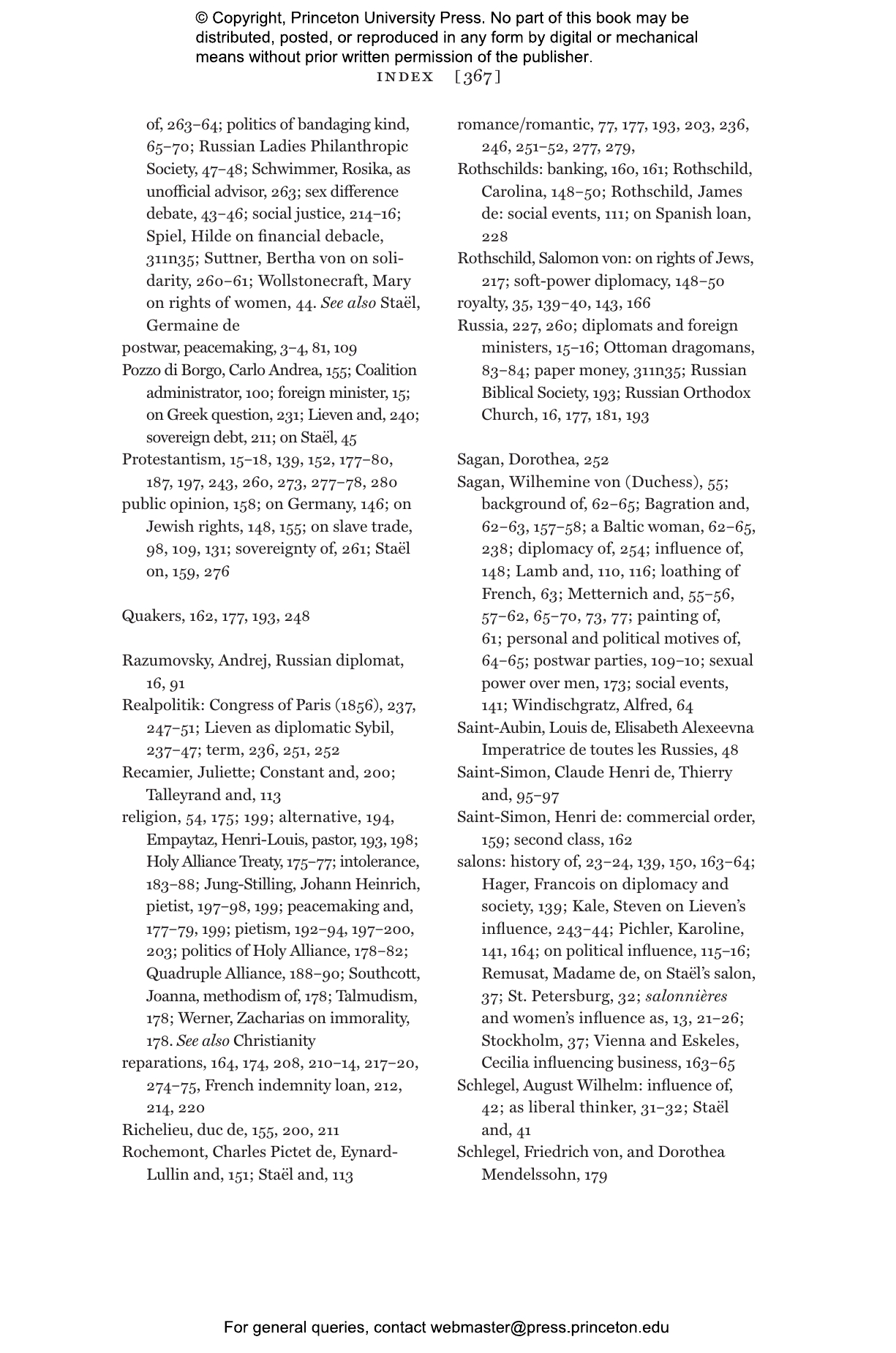 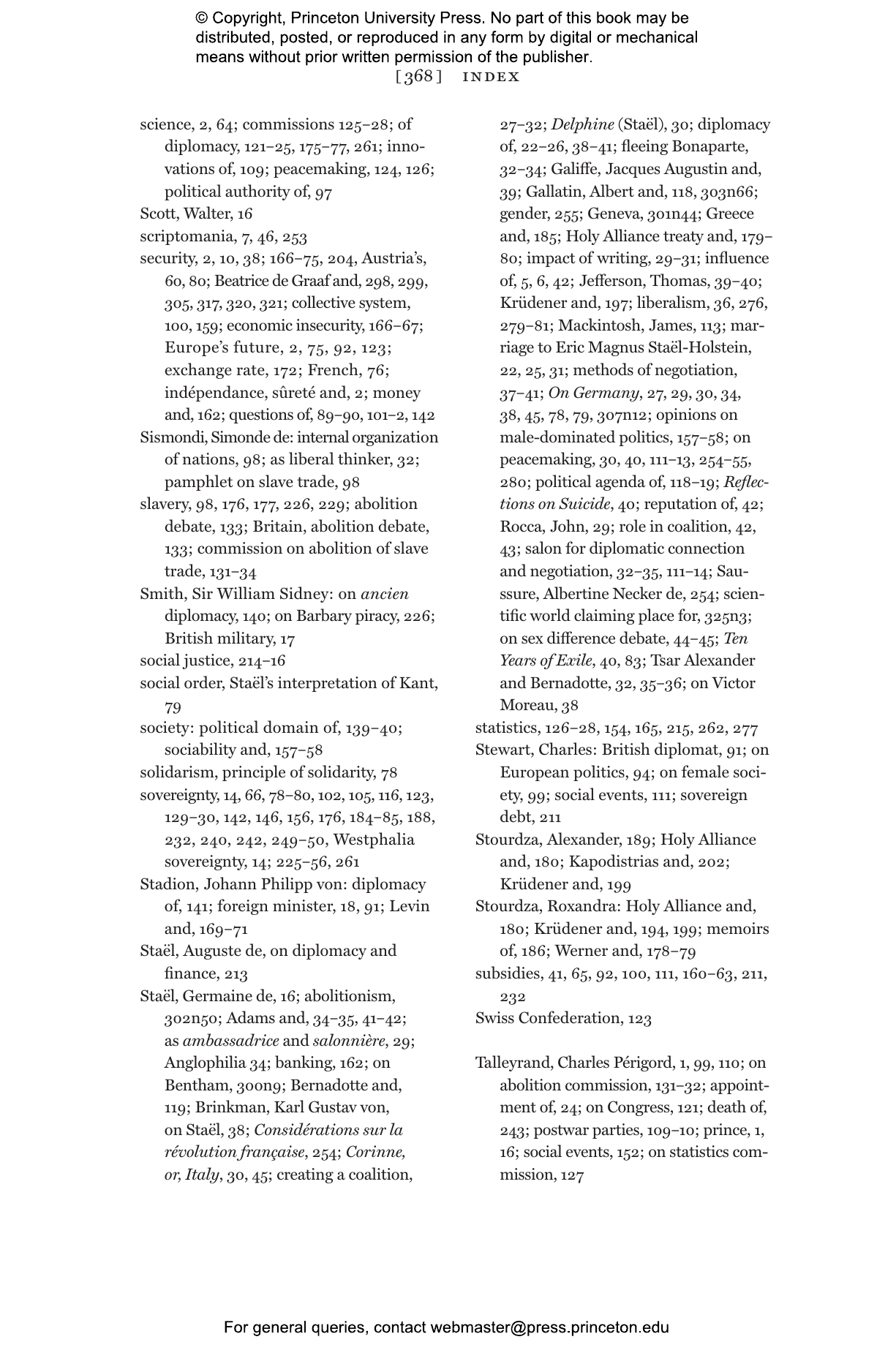 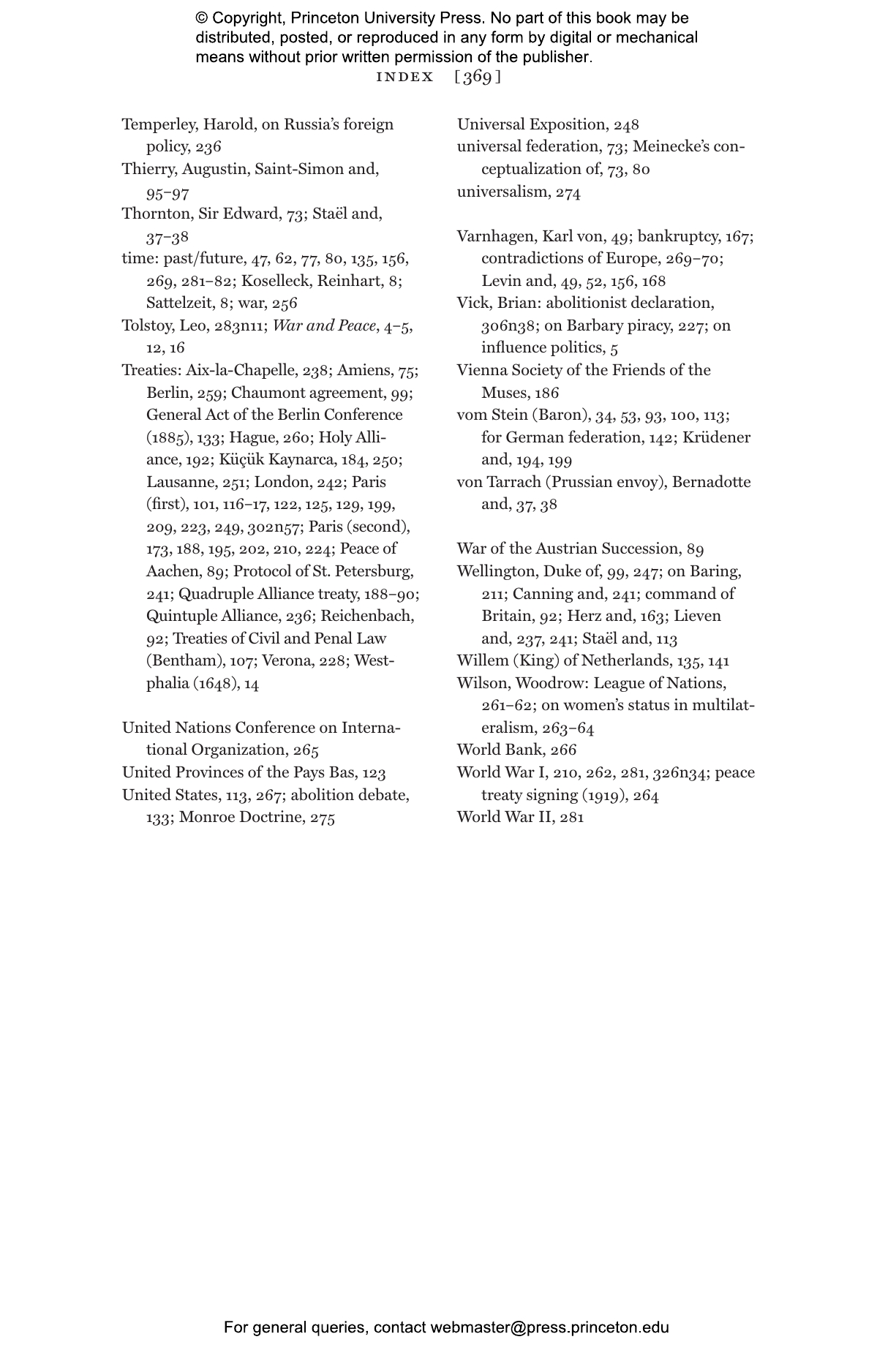 The story of the women, financiers, and other unsung figures who helped to shape the post-Napoleonic global order 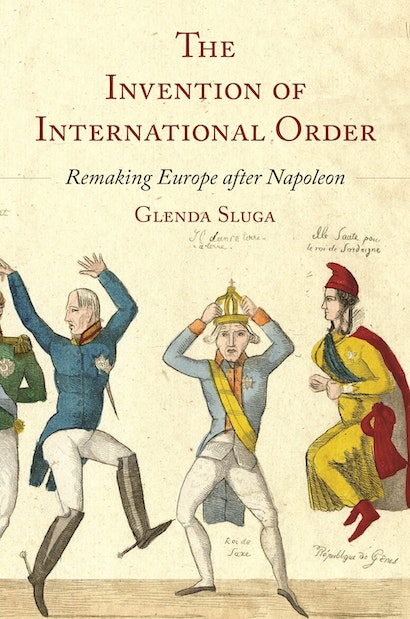 In 1814, after decades of continental conflict, an alliance of European empires captured Paris and exiled Napoleon Bonaparte, defeating French military expansionism and establishing the Concert of Europe. This new coalition planted the seeds for today’s international order, wedding the idea of a durable peace to multilateralism, diplomacy, philanthropy, and rights, and making Europe its center. Glenda Sluga reveals how at the end of the Napoleonic wars, new conceptions of the politics between states were the work not only of European statesmen but also of politically ambitious aristocratic and bourgeois men and women who seized the moment at an extraordinary crossroads in history.

In this panoramic book, Sluga reinvents the study of international politics, its limitations, and its potential. She offers multifaceted portraits of the leading statesmen of the age, such as Tsar Alexander, Count Metternich, and Viscount Castlereagh, showing how they operated in the context of social networks often presided over by influential women, even as they entrenched politics as a masculine endeavor. In this history, figures such as Madame de Staël and Countess Dorothea Lieven insist on shaping the political transformations underway, while bankers influence economic developments and their families agitate for Jewish rights.

Monumental in scope, this groundbreaking book chronicles the European women and men who embraced the promise of a new kind of politics in the aftermath of the Napoleonic wars, and whose often paradoxical contributions to modern diplomacy and international politics still resonate today. 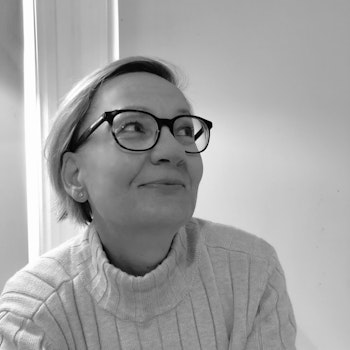 “Wonderfully rich and nuanced. Sluga explores the complex and often contradictory ways in which novel practices of diplomacy and peacemaking in the period after Napoleon were socially and transnationally embedded, and shows how the gendered boundaries of modern international politics were affecting whose voices and views were heard.”—Andrew Hurrell, author of On Global Order: Power, Values, and the Constitution of International Society

“An insightful account of how the modern international order was invented at the end of the Napoleonic wars.”—Naoko Shimazu, author of Japanese Society at War: Death, Memory, and the Russo-Japanese War

"Highly elegant and concise. Sluga brings to life not only the statesmen, monarchs, and diplomats who shaped the post-Napoleonic world, but also the bankers who facilitated this new order and the women who used their networks, wealth, reputations, and standing as salonnières and ambassadrices."—Beatrice de Graaf, author of Fighting Terror after Napoleon: How Europe Became Secure after 1815

"This is a pathbreaking book that will be widely read and cited. I know of no other comparable work on the important role of women intellectual influencers and ambassadrices in the development of imperial Europe's society of states after the Napoleonic wars."—Patricia Owens, author of Between War and Politics: International Relations and the Thought of Hannah Arendt