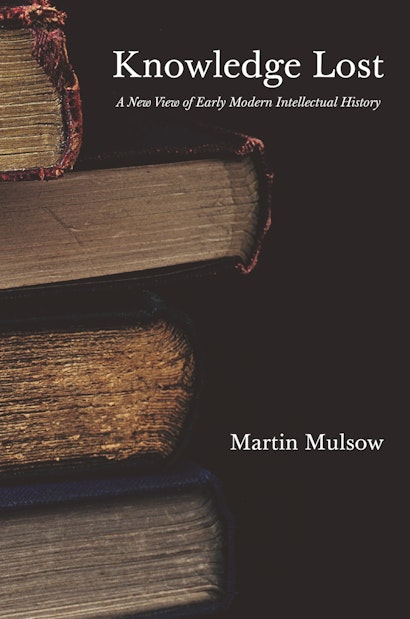 Until now the history of knowledge has largely been about formal and documented accumulation, concentrating on systems, collections, academies, and institutions. The central narrative has been one of advancement, refinement, and expansion. Martin Mulsow tells a different story. Knowledge can be lost: manuscripts are burned, oral learning dies with its bearers, new ideas are suppressed by censors. Knowledge Lost is a history of efforts, from the Renaissance to the Enlightenment, to counter such loss. It describes how critics of ruling political and religious regimes developed tactics to preserve their views; how they buried their ideas in footnotes and allusions; how they circulated their tracts and treatises in handwritten copies; and how they commissioned younger scholars to spread their writings after death.

Filled with exciting stories, Knowledge Lost follows the trail of precarious knowledge through a series of richly detailed episodes. It deals not with the major themes of metaphysics and epistemology, but rather with interpretations of the Bible, Orientalism, and such marginal zones as magic. And it focuses not on the usual major thinkers, but rather on forgotten or half-forgotten members of the “knowledge underclass,” such as Pietro della Vecchia, a libertine painter and intellectual; Charles-César Baudelot, an antiquarian and numismatist; and Johann Christoph Wolf, a pastor, Hebrew scholar, and witness to the persecution of heretics.

Offering a fascinating new approach to the intellectual history of early modern Europe, Knowledge Lost is also an ambitious attempt to rethink the very concept of knowledge.

Martin Mulsow is professor of intellectual history at the University of Erfurt, where he directs the Gotha Research Center for Early Modern Studies. He is the author of Enlightenment Underground: Radical Germany, 1680–1720 and Accidental Radicals: The Hidden Origins of the German Enlightenment.

“Knowledge Lost is an extraordinary book that brings to light a rich, fascinating, and largely unfamiliar world and offers scholars a new and fertile model for the study of intellectual history. Martin Mulsow works with equal precision and deftness at every level of scholarship, from the microscopic analysis of images and documents to the tracing of early modern postal networks. Several of the chapters have the fascination of detective stories, and the book as a whole is a thrilling read, eloquent and vivid.”—Anthony Grafton, Princeton University

“This is a book of exceptional importance and one of the most fascinating accounts of the early Enlightenment in recent decades.”—Jonathan Israel, Institute of Advanced Study, Princeton