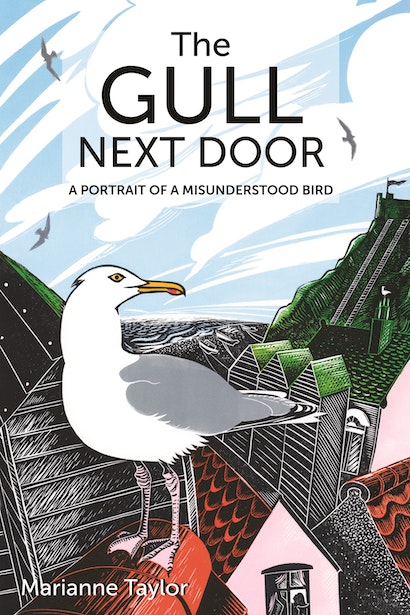 From a distance, gulls are beautiful symbols of freedom over the oceanic wilderness. Up close, however, they can be loud, aggressive and even violent. Yet gulls fascinate birdwatchers, and seafarers regard them with respect and affection. The Gull Next Door explores the natural history of gulls and their complicated relationship with humans.

Marianne Taylor grew up in an English seaside town where gulls are ever present. Today, she is a passionate advocate for these underappreciated birds. In this book, Taylor looks at the different gull species and sheds light on all aspects of the lives of gulls—how they find food, raise families, socialize and migrate across sea, coastland and countryside. She discusses the herring gull, Britain’s best-known and most persecuted gull species, whose numbers are declining at an alarming rate. She looks at gulls in legend, fiction and popular culture, and explains what we can do to protect gull populations around the world.

The Gull Next Door reveals deeper truths about these remarkable birds. They are thinkers and innovators, devoted partners and parents. They lead long lives and often indulge their powerful drive to explore and travel. But for all these natural gifts, many gull species are struggling to survive in the wild places they naturally inhabit, which is why they are now exploiting the opportunities of human habitats. This book shows how we might live more harmoniously with these majestic yet misunderstood birds.

Marianne Taylor is a freelance writer, editor, illustrator and photographer. Her books include RSPB British Birds of Prey, The Way of the Hare and Wild Coast: A Celebration of the Places Where Land Meets Sea. David Lindo is a naturalist, writer, broadcaster, speaker, photographer, wildlife tour leader and educator. His books include How to Be an Urban Birder (Princeton).

"It's sure to make even gull sceptics among us look to the sky in new, profound ways."—Coast Magazine

"The Gull Next Door is ecologically rigorous."—Patrick Galbraith, The Critic

"Taylor ... has written what I consider the best book on gulls I have read."—Jim Williams, Star Tribune

"The book is full of great stories, and I really enjoyed the read, as you will."—John Miles, BirdWatching Magazine

"The Gull Next Door is one of those books that is interesting, enlightening, at times making the reader smile and the author’s enthusiasm for these birds is definitely infectious through these pages. This is an enjoyable book that gull experts and novices can enjoy, but most of all it is an enjoyable read for anyone who loves birds."—Nick Upton, Dartford Waffler

"[An] informative, thoughtful, and entertaining book."—Johannes Riutta, The Well-read Naturalist