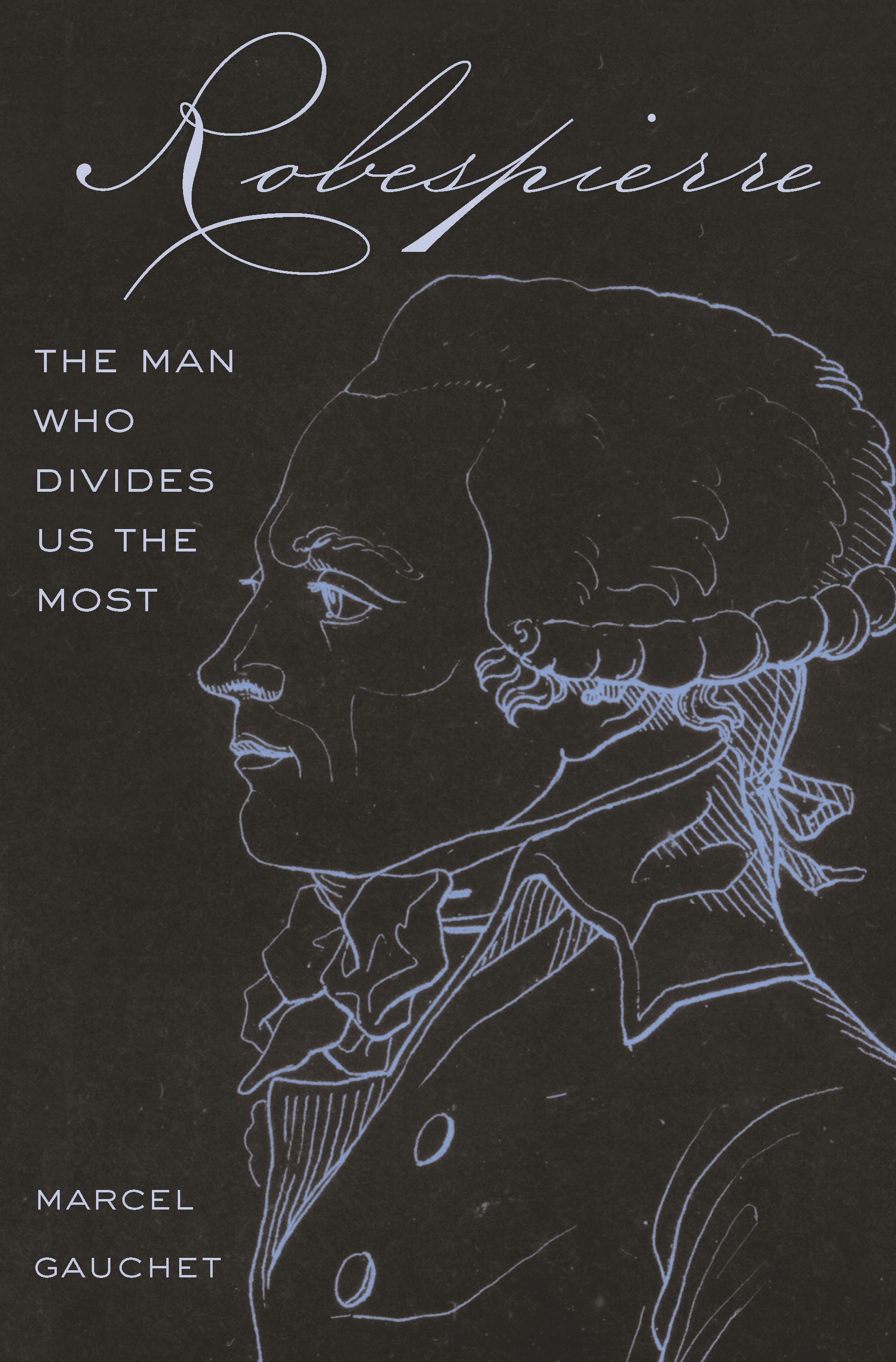 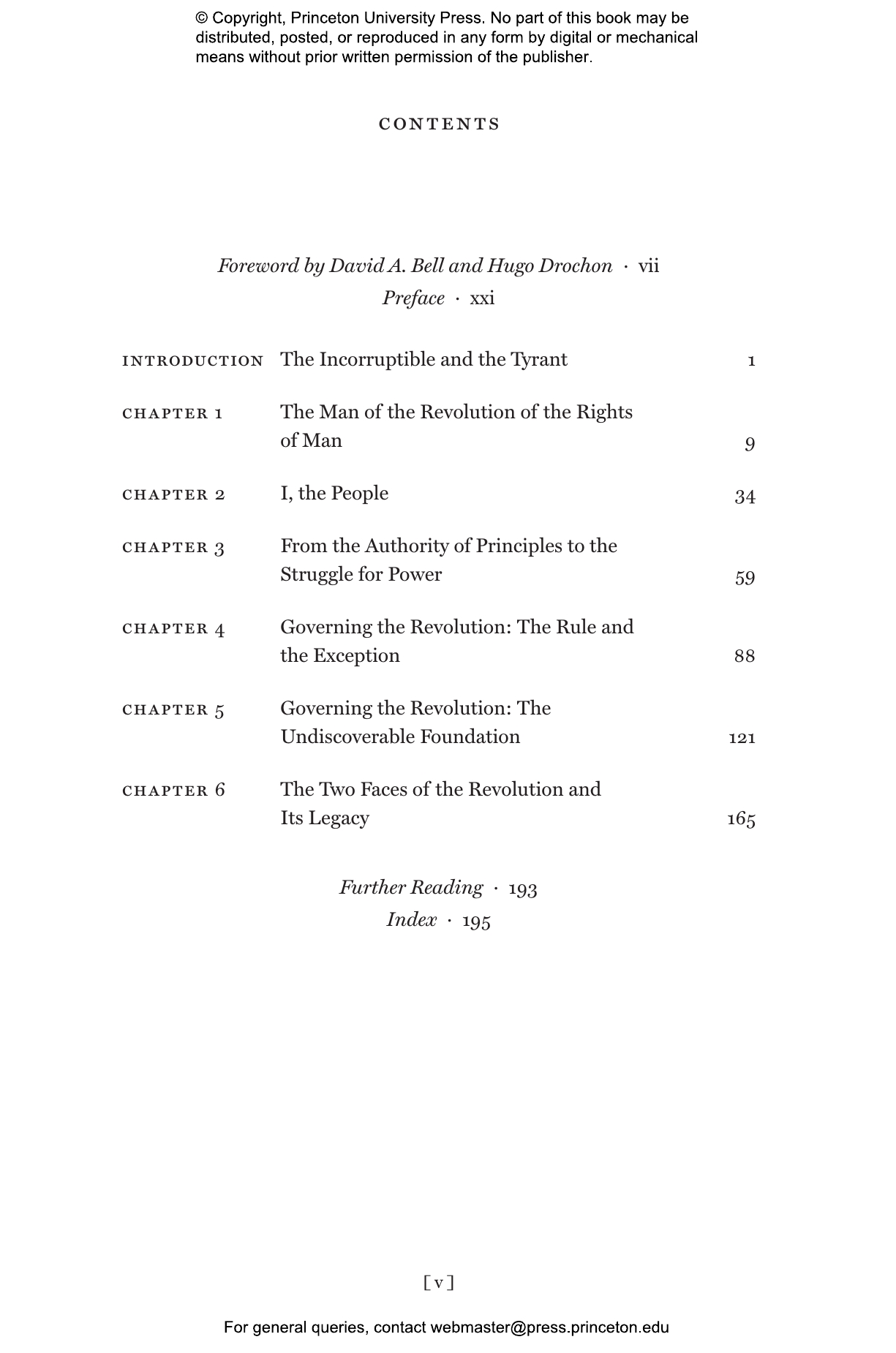 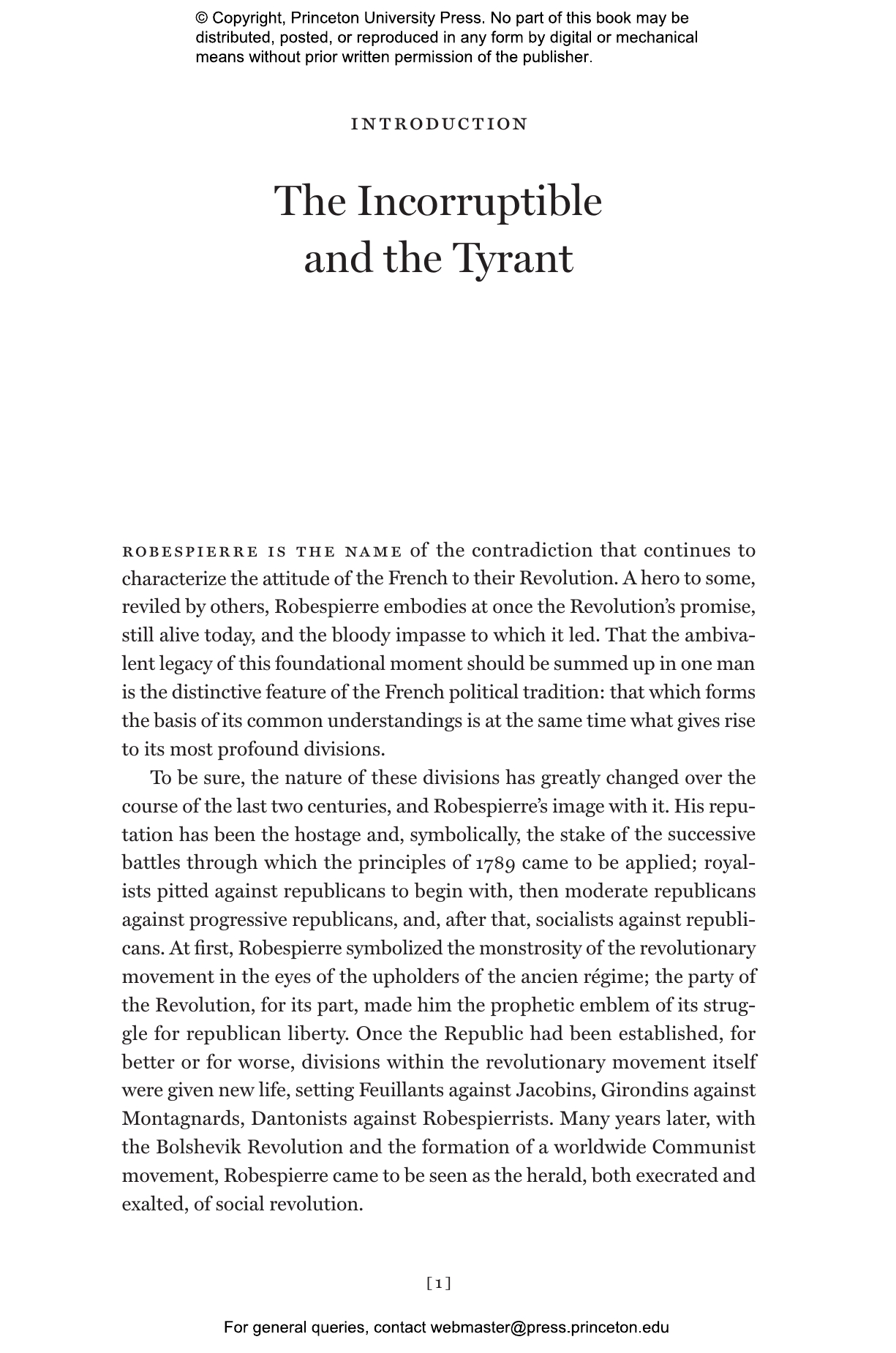 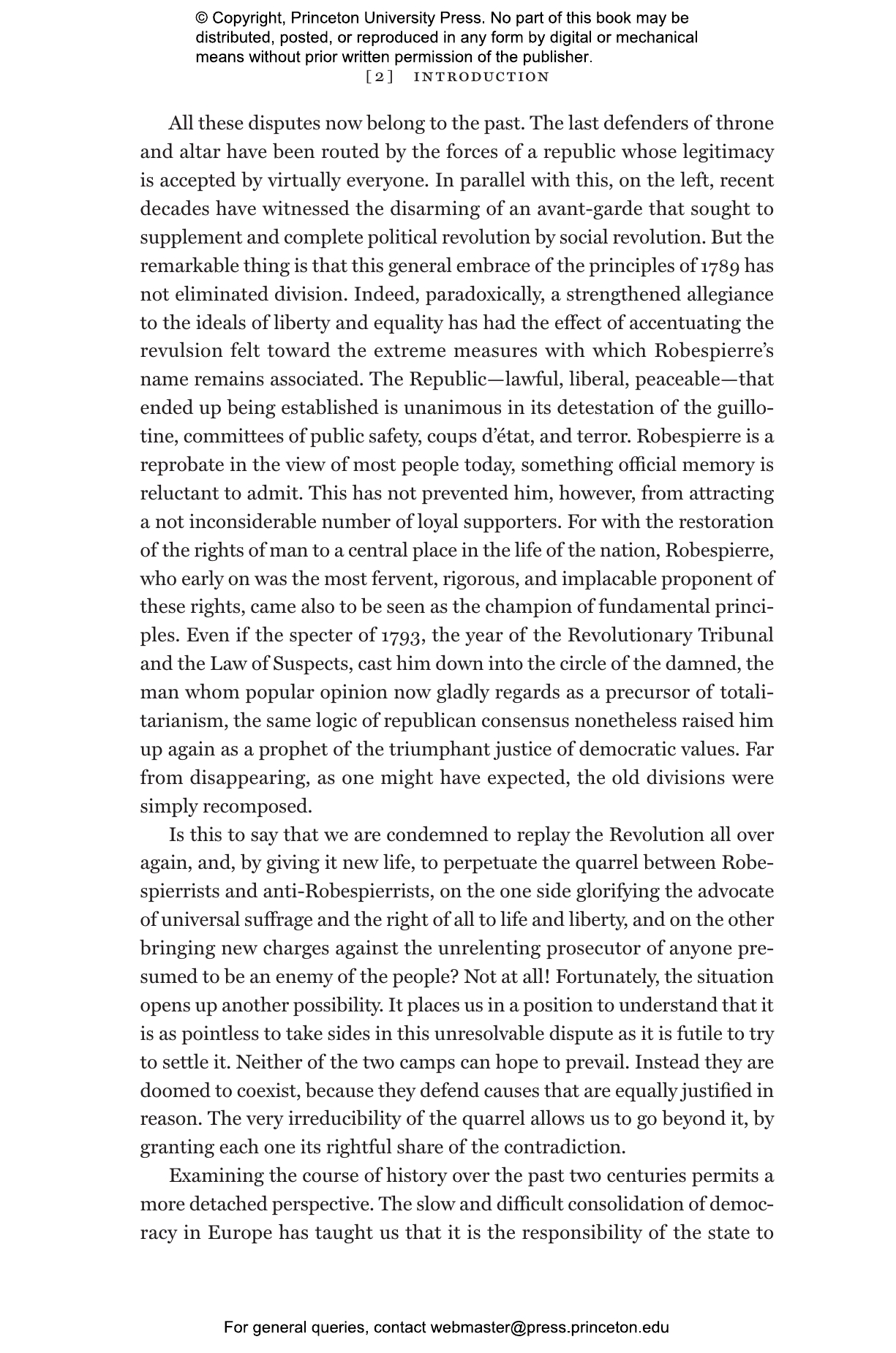 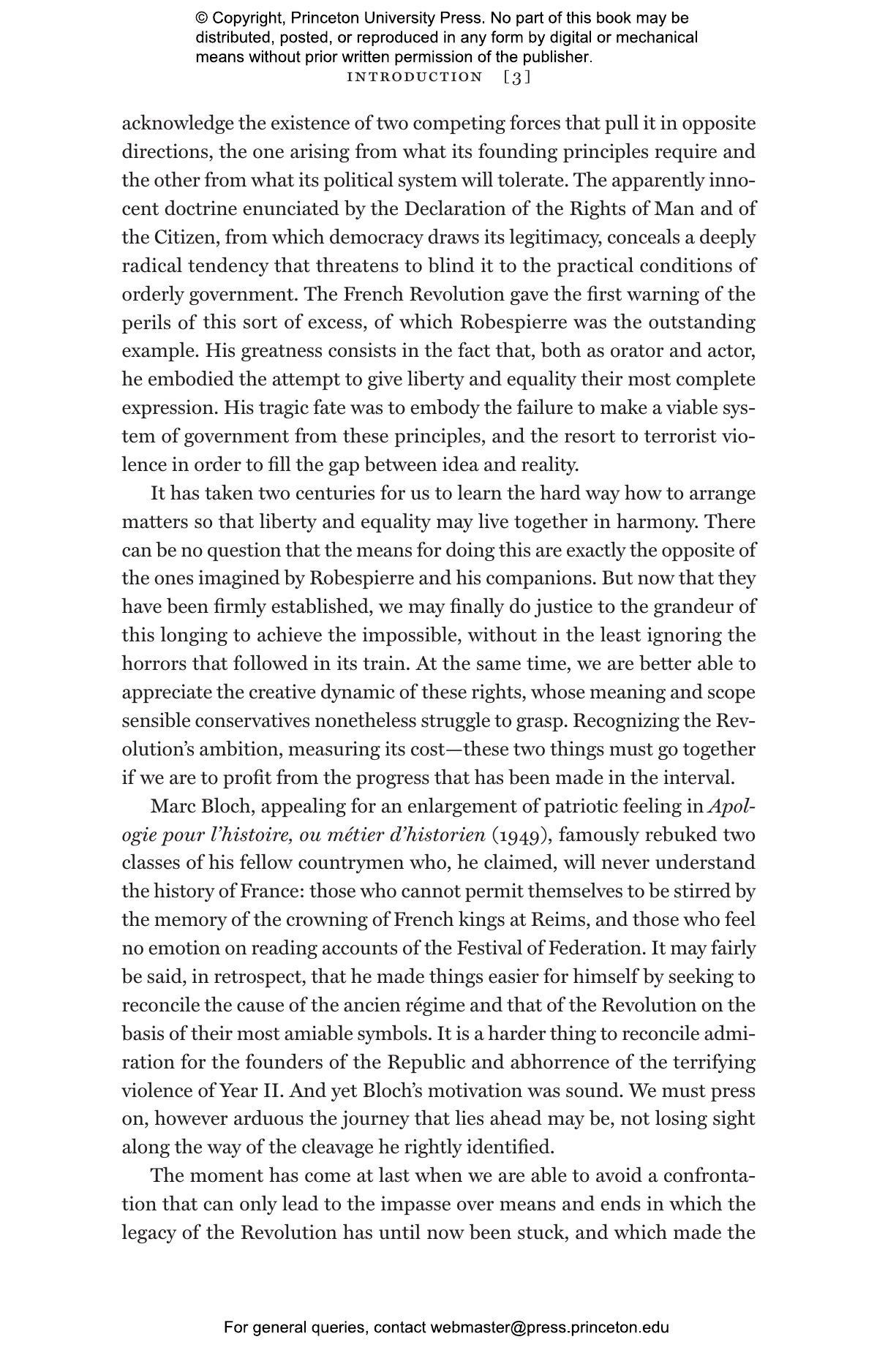 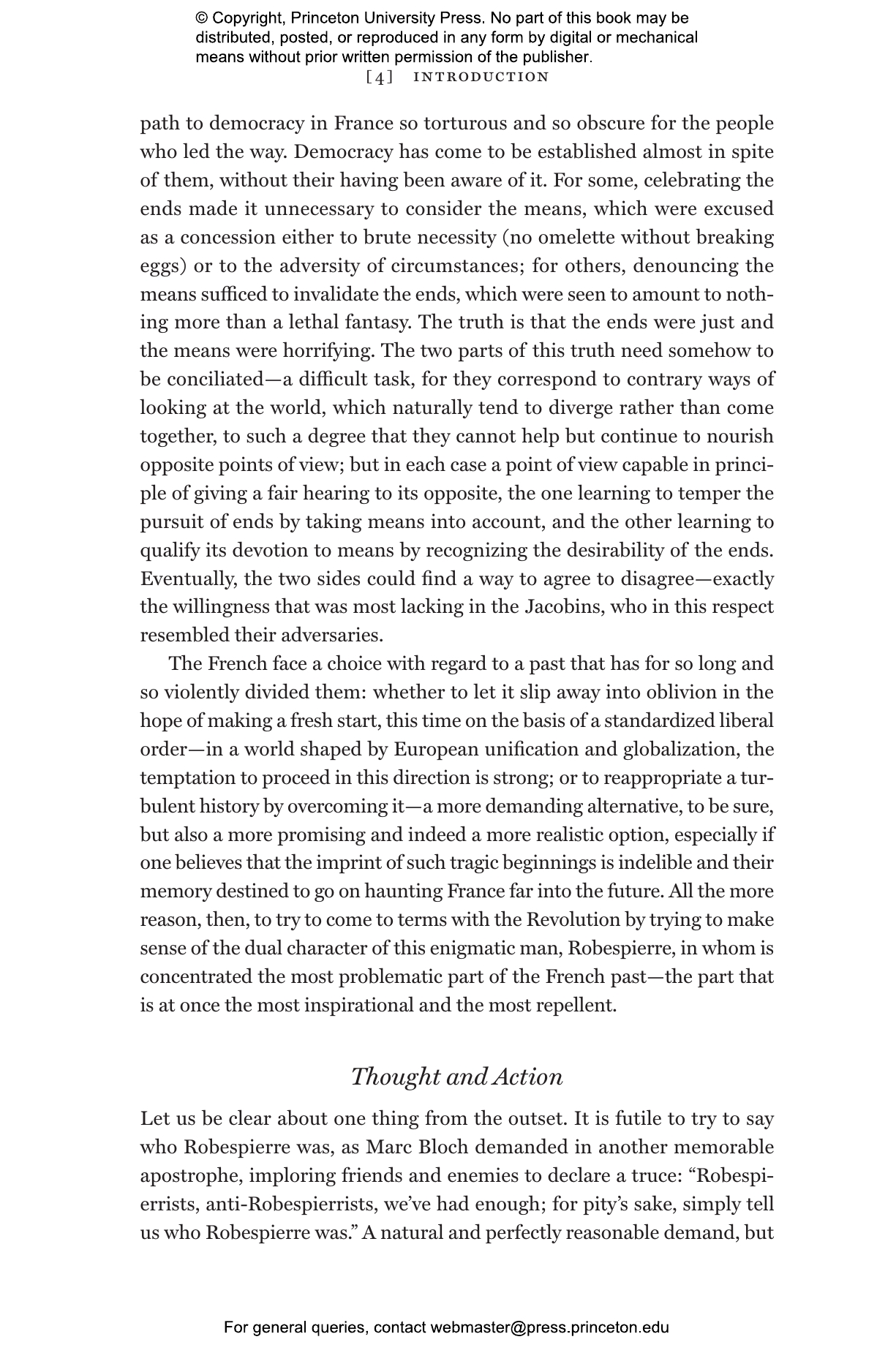 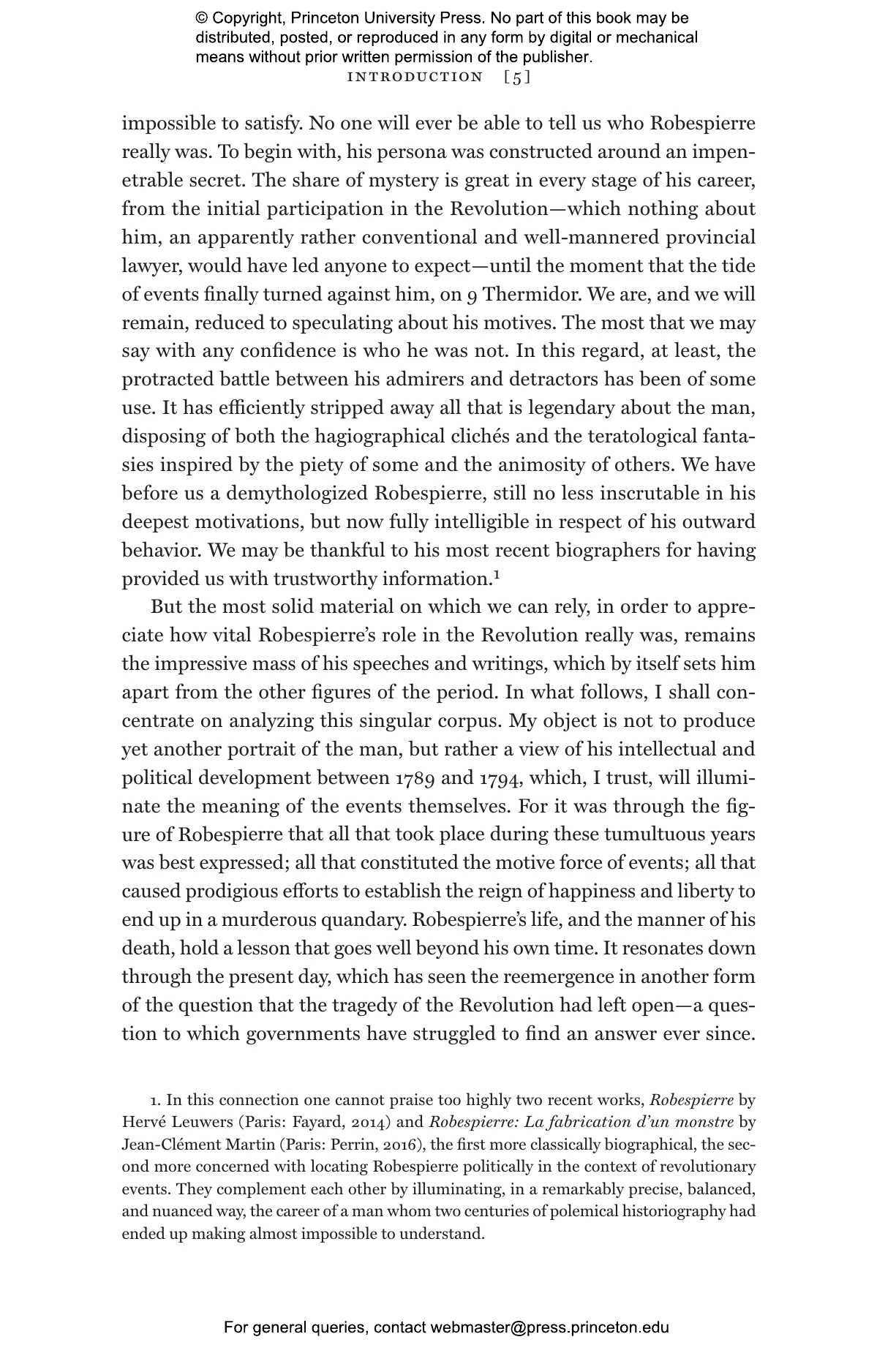 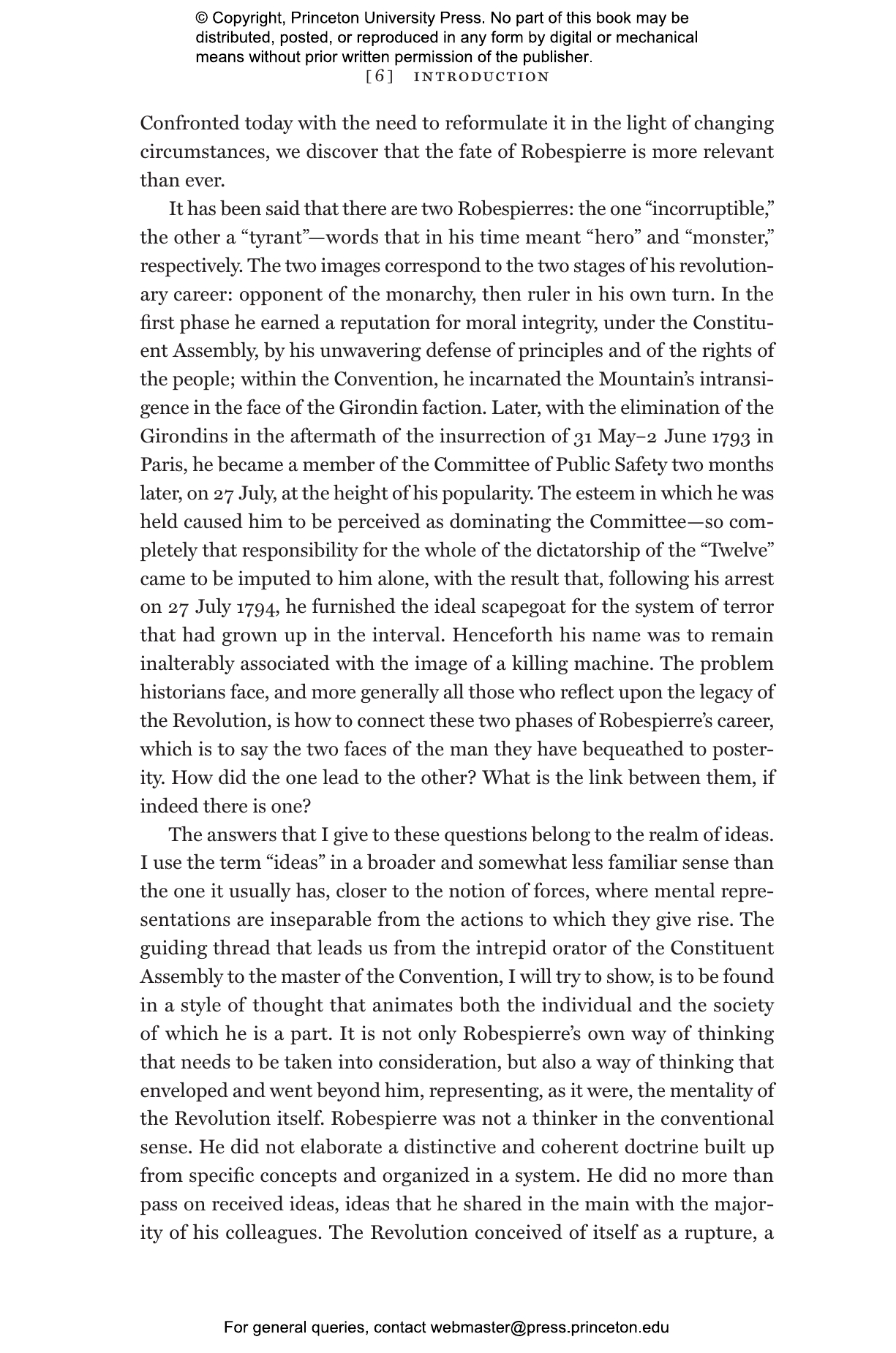 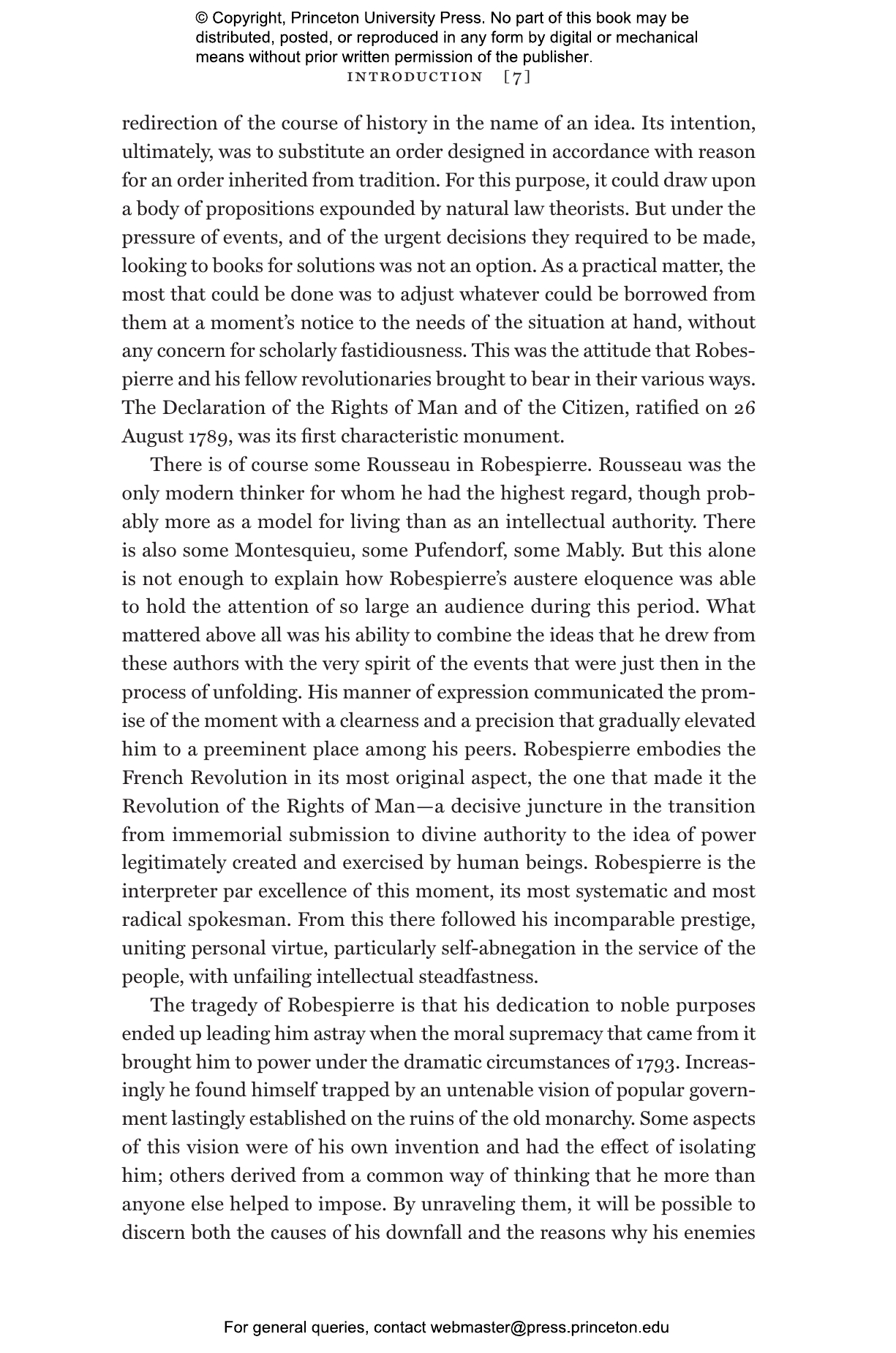 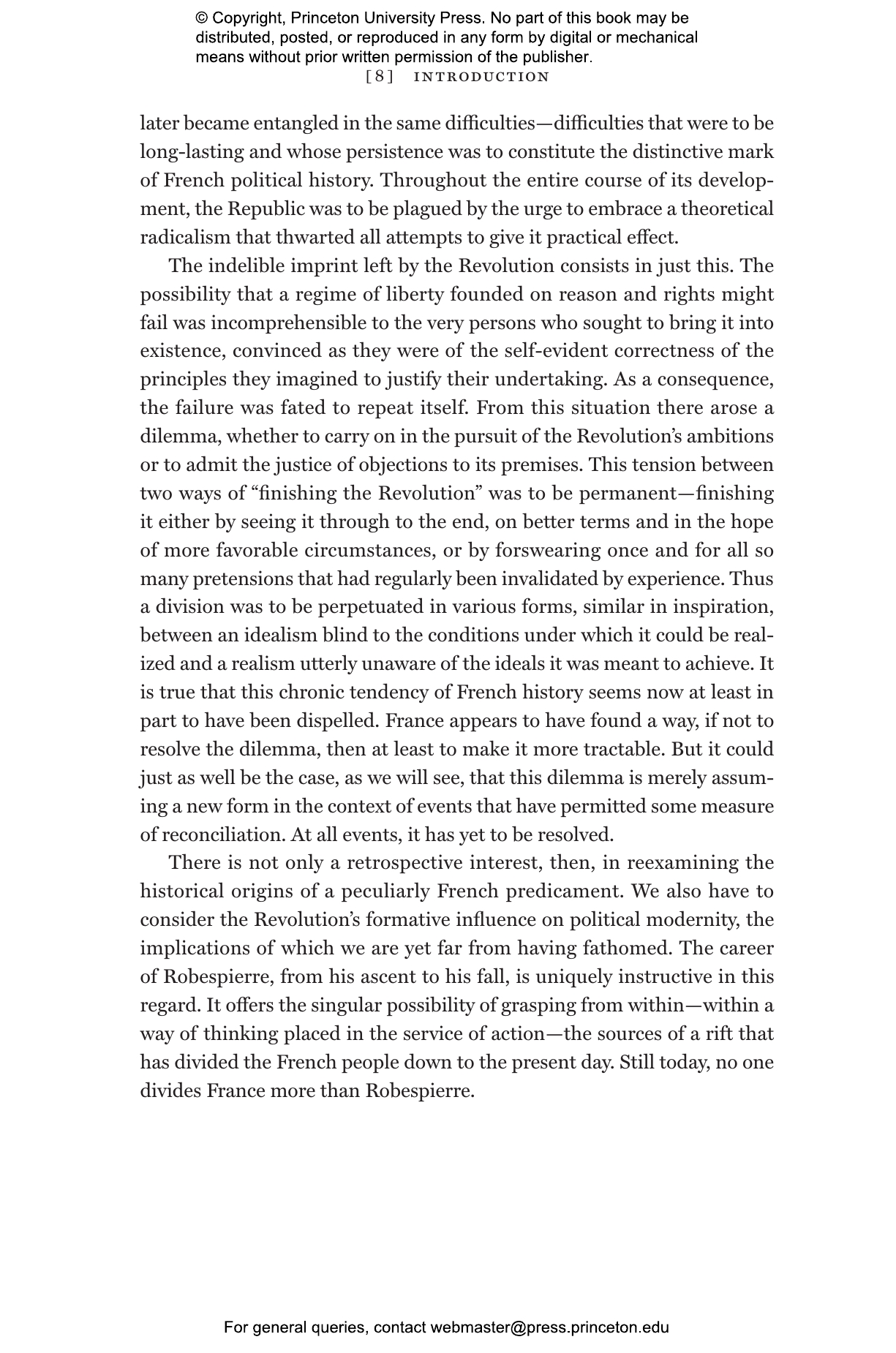 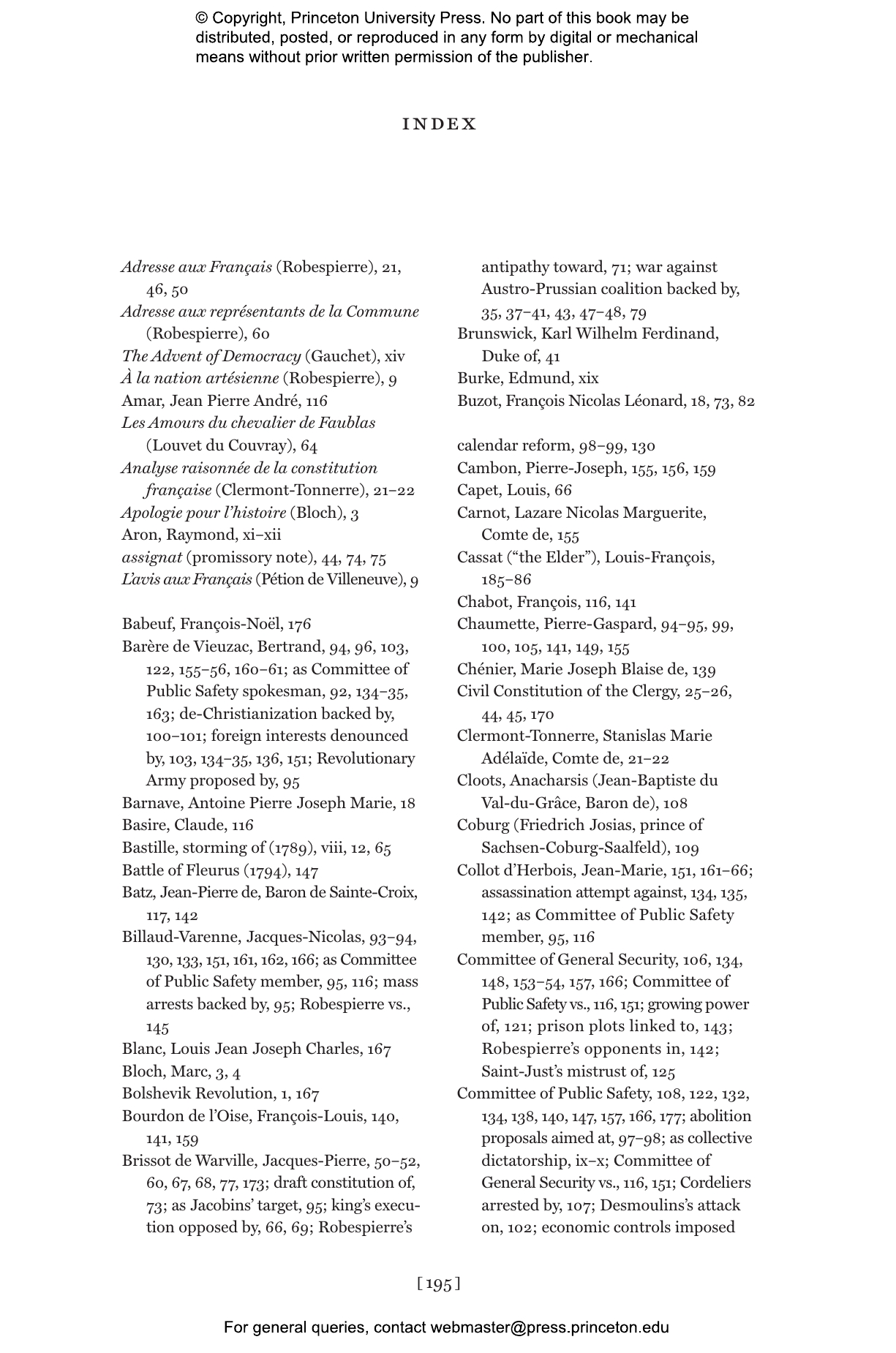 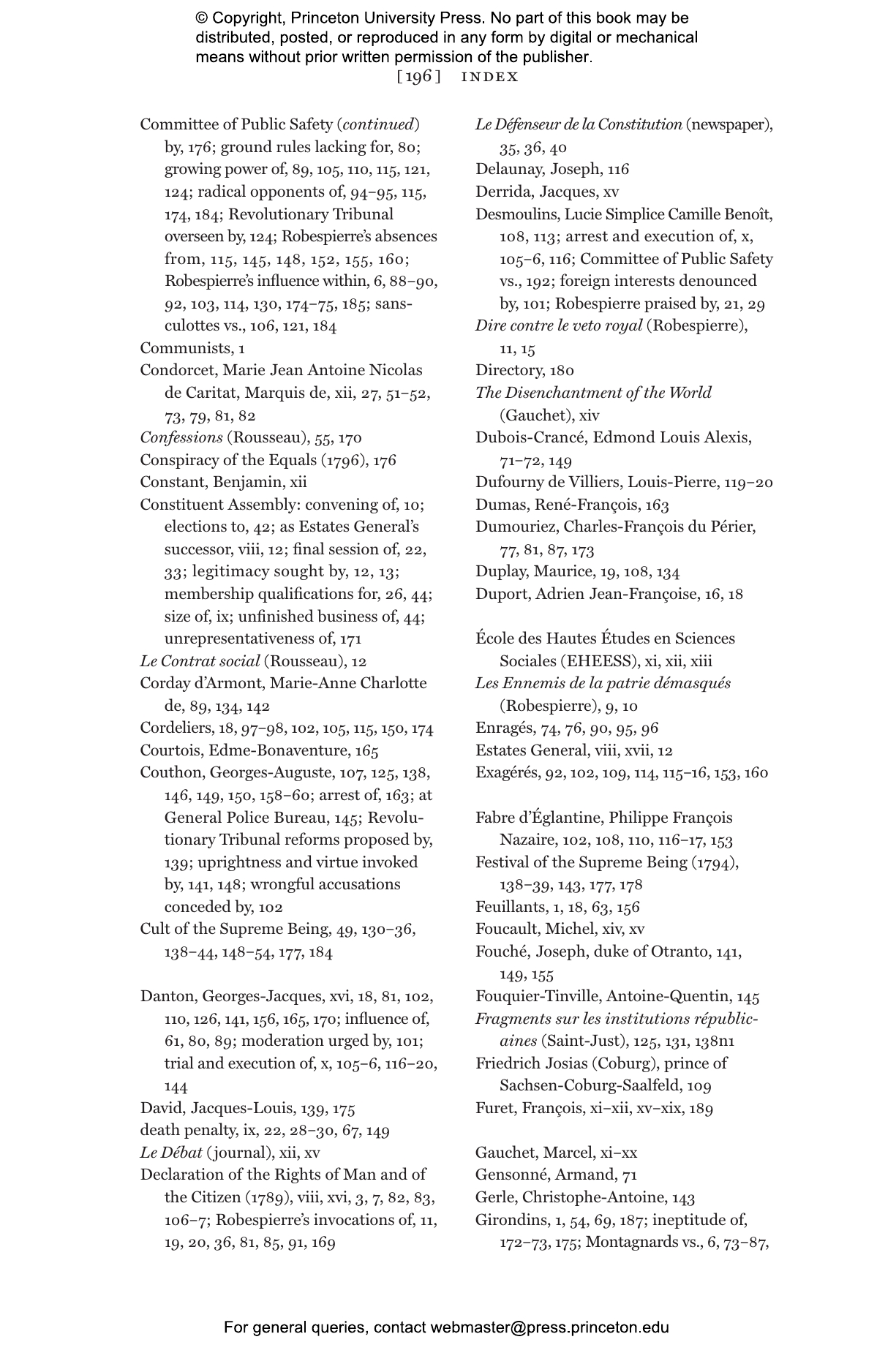 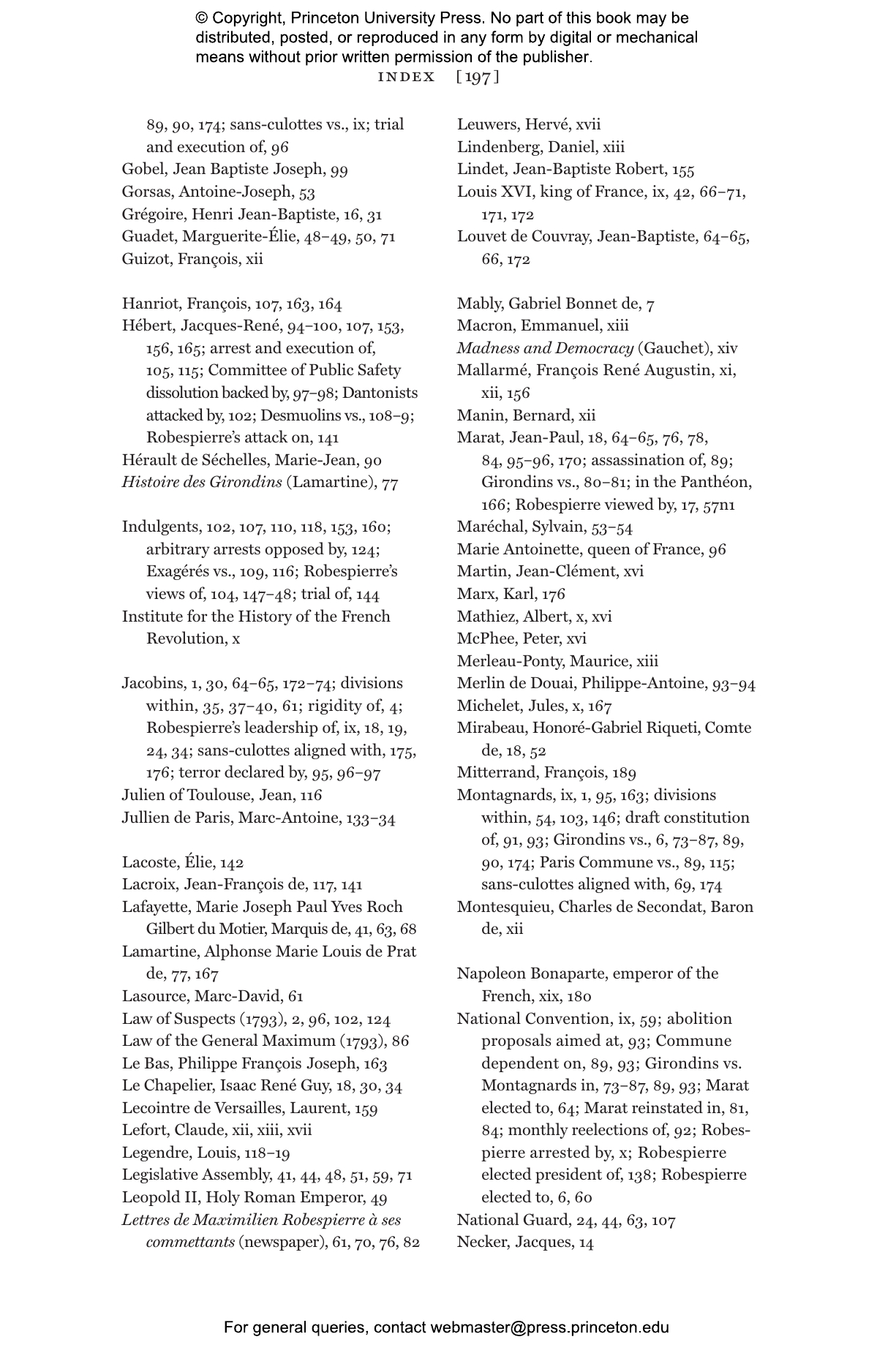 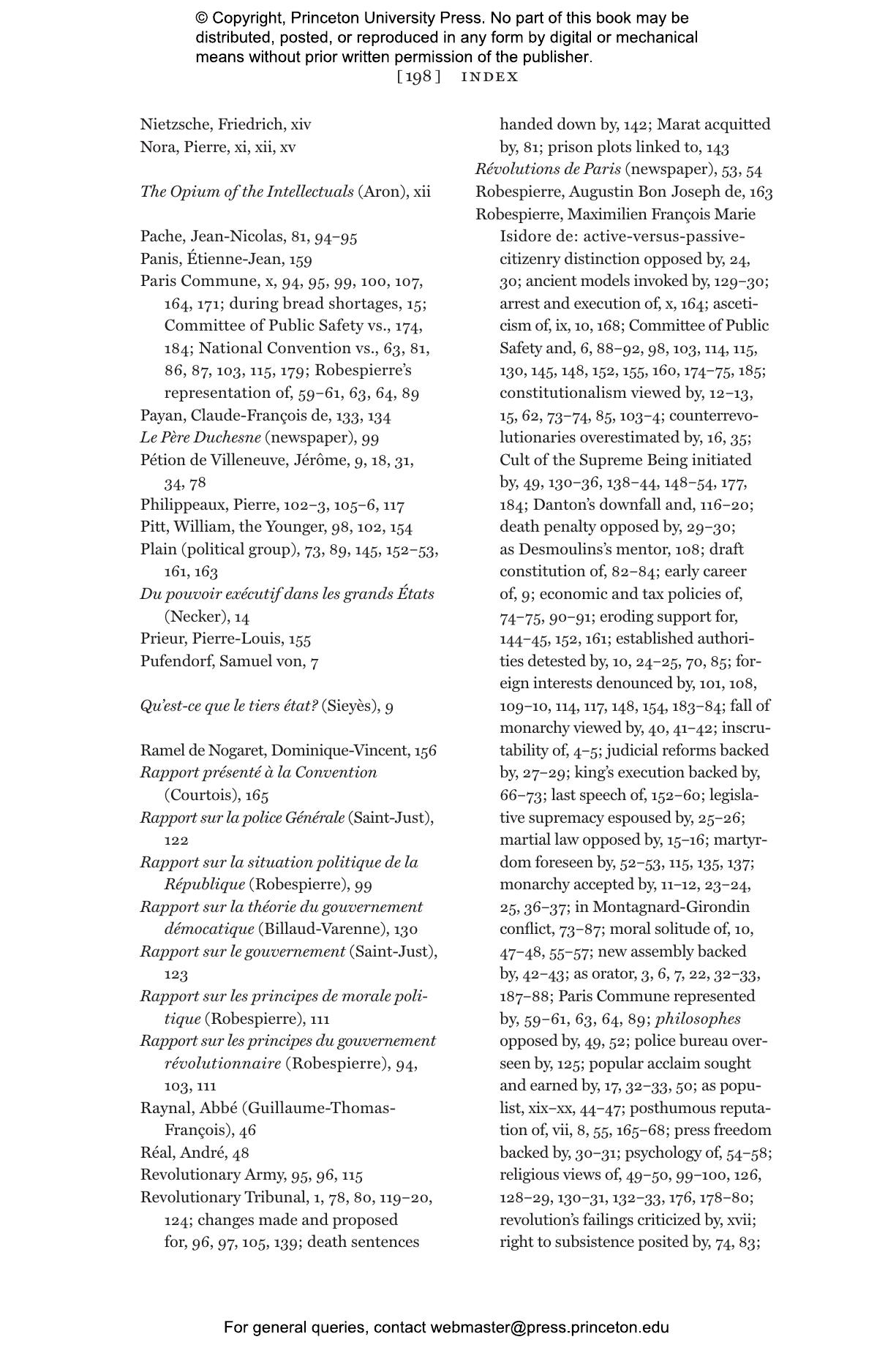 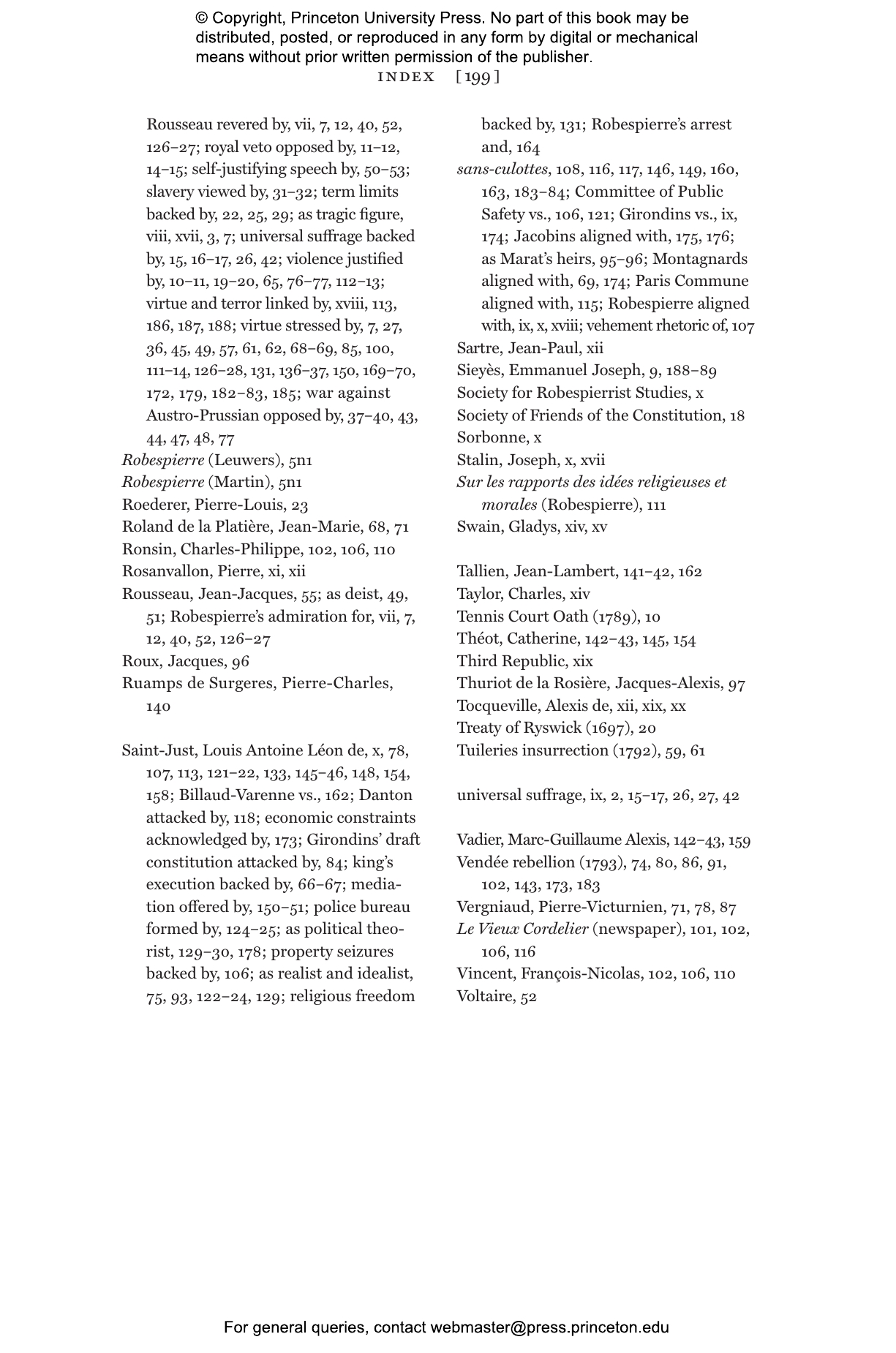 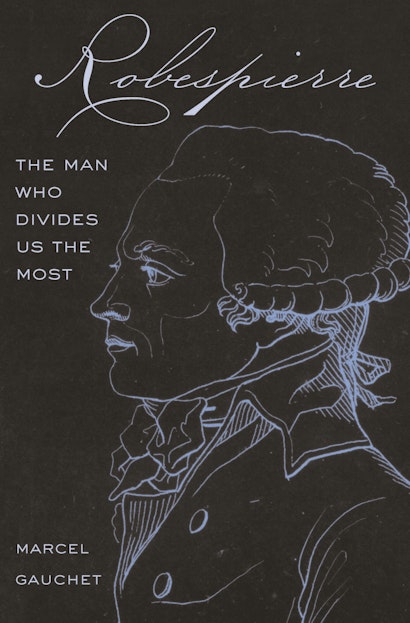 Maximilien Robespierre (1758–1794) is arguably the most controversial and contradictory figure of the French Revolution, inspiring passionate debate like no other protagonist of those dramatic and violent events. The fervor of those who defend Robespierre the “Incorruptible,” who championed the rights of the people, is met with revulsion by those who condemn him as the bloodthirsty tyrant who sent people to the guillotine. Marcel Gauchet argues that he was both, embodying the glorious achievement of liberty as well as the excesses that culminated in the Terror.

In much the same way that 1789 and 1793 symbolize the two opposing faces of the French Revolution, Robespierre’s contradictions were the contradictions of the revolution itself. Robespierre was its purest incarnation, neither the defender of liberty who fell victim to the corrupting influence of power nor the tyrant who betrayed the principles of the revolution. Gauchet shows how Robespierre’s personal transition from opposition to governance was itself an expression of the tragedy inherent in a revolution whose own prophetic ideals were impossible to implement.

This panoramic book tells the story of how the man most associated with the founding of modern French democracy was also the first tyrant of that democracy, and it offers vital lessons for all democracies about the perpetual danger of tyranny.

Marcel Gauchet is one of France’s preeminent public intellectuals. He is professor emeritus at the École des Hautes Études en Sciences Sociales in Paris and the author of many books, including Madness and Democracy: The Modern Psychiatric Universe and The Disenchantment of the World: A Political History of Religion (both Princeton).

“For Gauchet, Robespierre is a tragic figure because he hoped to lay the foundations of the rights-respecting liberal-democratic order which we now venerate but could not escape from a fatally inappropriate vision of the people for whose rights he was fighting, and, instead of harmony, generated horror. He stands in one sense as an inspiration, but in another as a warning.”—from the foreword by David A. Bell and Hugo Drochon

“A subtle, elegant, and perspicacious explanation of Robespierre’s double career, in 1789–91 and 1792–94. It is also a general guide to the history of modern France.”—Patrice Higonnet, Times Literary Supplement

“Marcel Gauchet’s intellectual biography of the French Revolution’s most celebrated—or notorious—spokesman brings out all the ambiguities forced upon him by the way the revolution developed. Gauchet’s lucid analysis makes clear why Robespierre’s role in shaping the revolution and its legacy has fueled so much vehement disagreement over two centuries.”—William Doyle, author of The Oxford History of the French Revolution

“In this engrossing and provocative book, Marcel Gauchet departs from the dichotomy of ‘heroic martyr or bloodstained monster’ to provide a new understanding of Robespierre as a personification of the revolution’s political trajectory. Gauchet gives us a controversial yet sympathetic reading of Robespierre’s idealism and tragedy while shedding light on core debates about the meaning of democracy itself.”—Peter McPhee, author of Robespierre: A Revolutionary Life