From the Nobel Prize–winning writer, a new collection of literary and personal essays 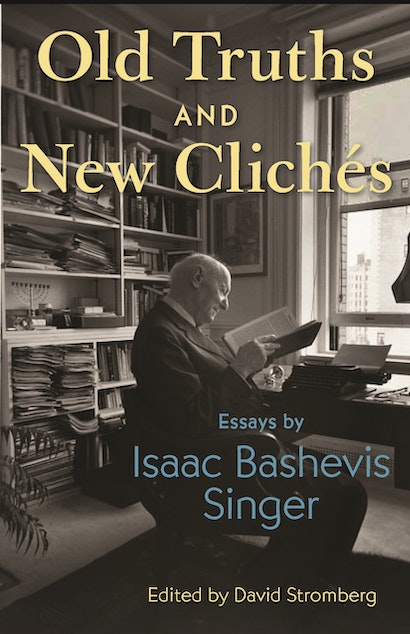 Old Truths and New Clichés collects nineteen essays—most of them previously unpublished in English—by Isaac Bashevis Singer on topics that were central to his artistic vision throughout an astonishing and prolific literary career spanning more than six decades. Expanding on themes reflected in his best-known work—including the literary arts, Yiddish and Jewish life, and mysticism and philosophy—the book illuminates in new ways the rich intellectual, aesthetic, religious, and biographical background of Singer’s singular achievement as the first Yiddish-language author to be awarded the Nobel Prize for Literature.

Like a modern Montaigne, Singer studied human nature and created a body of work that contributed to a deeper understanding of the human spirit. Much of his philosophical thought was funneled into his stories. Yet these essays, which Singer himself translated into English or oversaw the translation of, present his ideas in a new way, as universal reflections on the role of the artist in modern society. The unpublished essays featured here include “Old Truths and New Clichés,” “The Kabbalah and Modern Times,” and “A Trip to the Circus.”

Old Truths and New Clichés brims with stunning archival finds that will make a significant impact on how readers understand Singer and his work. Singer’s critical essays have long been overlooked because he has been thought of almost exclusively as a storyteller. This book offers an important correction to the record by further establishing Singer as a formidable intellectual.

Isaac Bashevis Singer (1903–1991) was the Nobel Prize–winning author of many novels, short story collections, memoirs, and children’s books, including Gimpel the Fool and Other Stories, The Magician of Lublin, and Enemies, A Love Story. David Stromberg, a writer, translator, and literary scholar, is editor for the Isaac Bashevis Singer Literary Trust. His books include Baddies, Idiot Love and the Elements of Intimacy, and A Short Inquiry into the End of the World.

“A wonderful and important new volume, Old Truths and New Clichés is game-changing for our understanding of Isaac Bashevis Singer.”—Debra Caplan, author of Yiddish Empire

"Sly and slightly maddening, blunt and often profound, the Singer of Old Truths and New Clichés surprises with both the generalized pronouncements of an arch individualist and the grounded insights of a staunch universalist. This too is the wonder that Singer was, and David Stromberg’s patient gathering of these sparks and shards is a gift—above all for the angle it offers onto this Jewish master’s intellectual obsessions and his refreshingly eccentric approach to Jewishness itself."—Peter Cole, author of Hymns & Qualms: New and Selected Poems and Translations

“Known for the demons, imps, and broken souls that populate his stories, Singer was also an often acerbic essayist whose critical analyses, once strewn throughout the Yiddish press, are unknown to most readers of English. This welcome collection of his essays offers new insights into this brilliant writer and his craft—his stark iconoclasm, his sometimes surprising attitudes toward literary interpretation, and his complexity.”—Eddy Portnoy, author of Bad Rabbi and Other Strange but True Stories from the Yiddish Press