A new definitive volume of the retirement papers of Thomas Jefferson 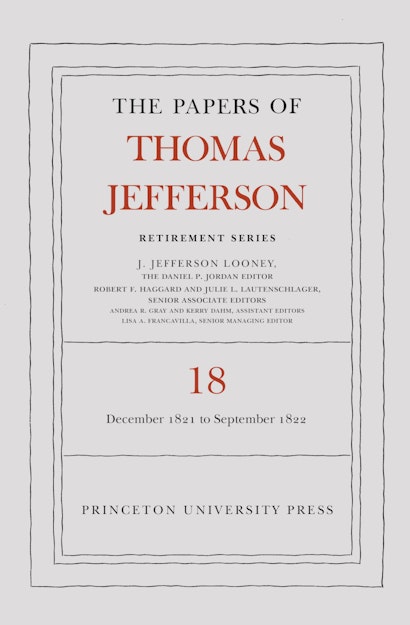 This volume’s 627 documents feature a vast assortment of topics. Jefferson writes of his dread of “a doting old age.” He inserts an anonymous note in the Richmond Enquirer denying that he has endorsed a candidate for the next presidential election, and he publishes two letters in that newspaper under his own name to refute a Federalist claim that he once benefited by overcharging the United States Treasury. Jefferson does not reply to unsolicited letters seeking his opinion on constitutional matters, judicial review, and a call for universal white male suffrage in Virginia. Fearing that it would set a dangerous precedent, he declines appointment as patron of a new society “for the civilisation of the Indians.” Jefferson is also asked to comment on proposed improvements to stoves, lighthouses, telescopes, and navigable balloons. Citing his advanced age and stiffened wrist, he avoids detailed replies and allows his complaint to John Adams about the volume of incoming correspondence to be leaked to the press in hopes that strangers will stop deluging them both with letters. Jefferson approves of the growth of Unitarianism and predicts that “there is not a young man now living in the US. who will not die an Unitarian.”