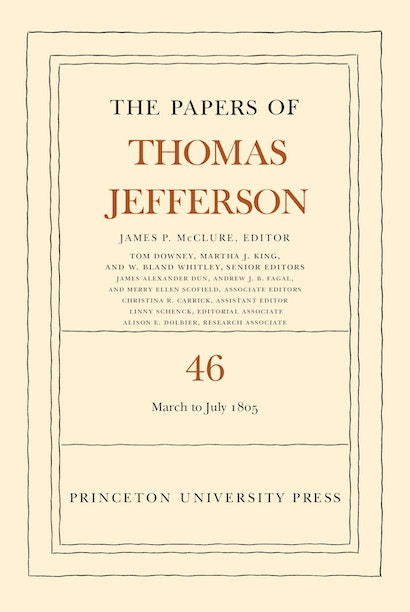 Congress adjourns early in March, and Jefferson goes home to Monticello for a month. After his return to Washington, he corresponds with territorial governors concerning appointments to legislative councils. He peruses information about Native American tribes, Spanish and French colonial settlements, and the geography of the Louisiana Territory. He seeks the consent of Spanish authorities to a U.S. exploration along the Red River while asserting privately that Spain “has met our advances with jealousy, secret malice, and ill faith.” A new law extends civil authority over foreign warships in U.S. harbors, and he considers using it also to constrain privateers. Federalist opponents bring up “antient slanders” to question his past private and official actions. His personal finances are increasingly reliant on bank loans. He starts a search for a new farm manager at Monticello. Meriwether Lewis and William Clark write from Fort Mandan in April before setting out up the Missouri River. Jefferson will not receive their reports until mid-July. In the Mediterranean, William Eaton coordinates the capture of the port of Derna and Tobias Lear negotiates terms of peace with Pasha Yusuf Qaramanli to end the conflict with Tripoli. News of those events will not reach the United States until September.