A unique collection of brilliant quotations from the legendary Pop artist 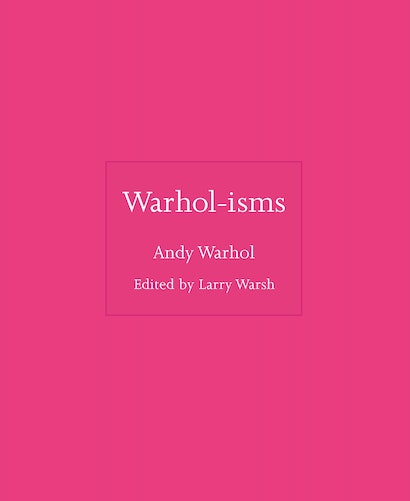 One of the most influential artists of his time and ours, Andy Warhol is nearly as renowned for what he said as for what he did. Indeed, he is so quotable that things he never said are endlessly and plausibly attributed to him, including, fittingly, the most celebrated fake Warhol saying—“In the future, everyone will be world-famous for 15 minutes.” Warhol-isms separates legend from fact to present a unique and comprehensive collection of authentic quotations from the Pop artist. Gathered from interviews and other primary sources, these deadpan, droll, ironic, and sincere gems—in which a superficial embrace of superficiality often disguises provocative, unconventional ideas—provide compelling insights into the life and work of an artist who has left an indelible mark on art and popular culture.

Andy Warhol (1928–1987) was an American painter, filmmaker, and photographer, and a leader of the Pop Art movement. He has been the subject of numerous retrospective exhibitions, books, and feature and documentary films. The Andy Warhol Museum in his native city of Pittsburgh is the largest museum in the United States dedicated to a single artist. Larry Warsh has been active in the art world for more than thirty years as a publisher and artist-collaborator. He is the editor of many books, including The Notebooks of Jean-Michel Basquiat, Basquiat-isms, Weiwei-isms, Haring-isms, Futura-isms, Abloh-isms, and Arsham-isms (all Princeton).