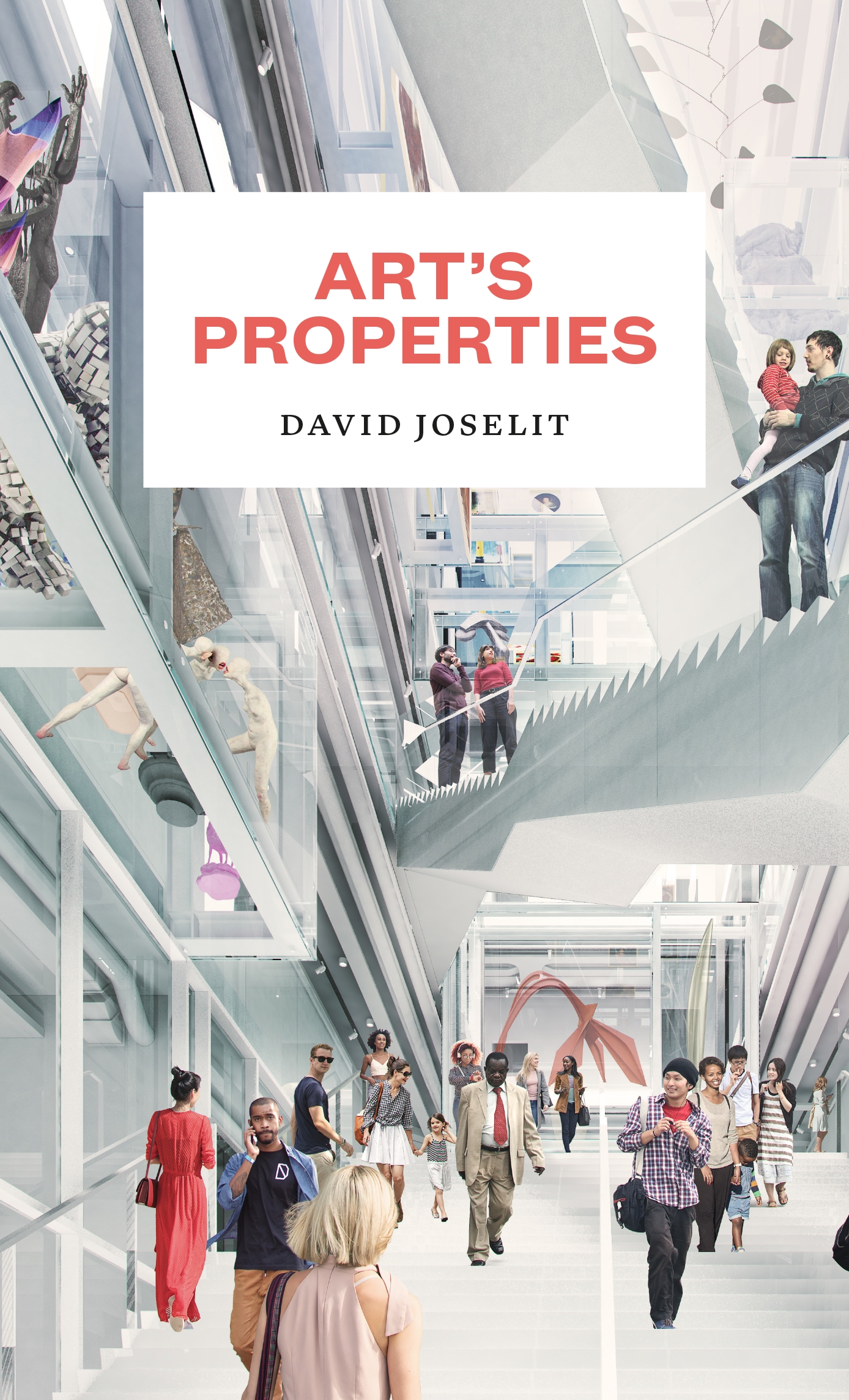 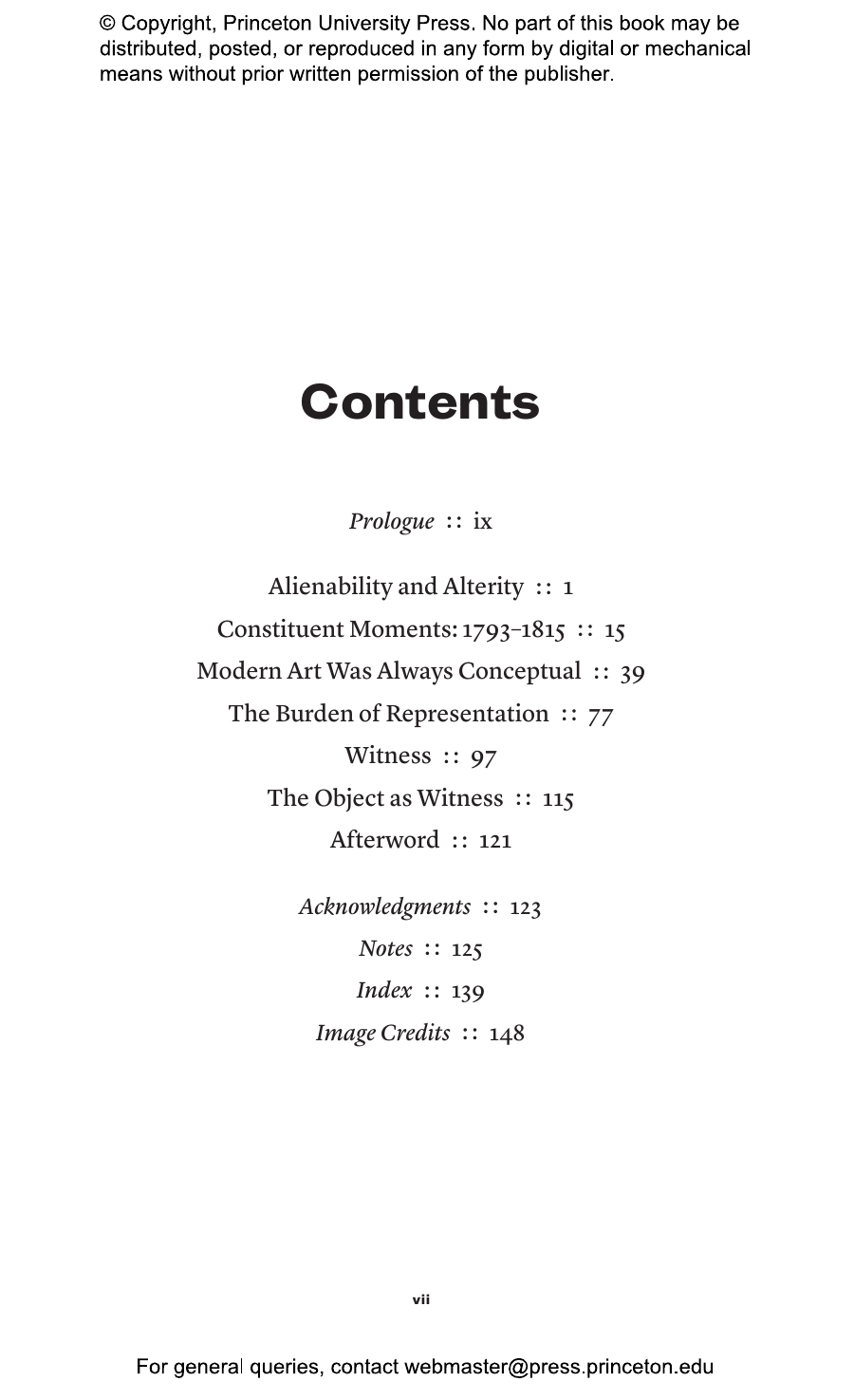 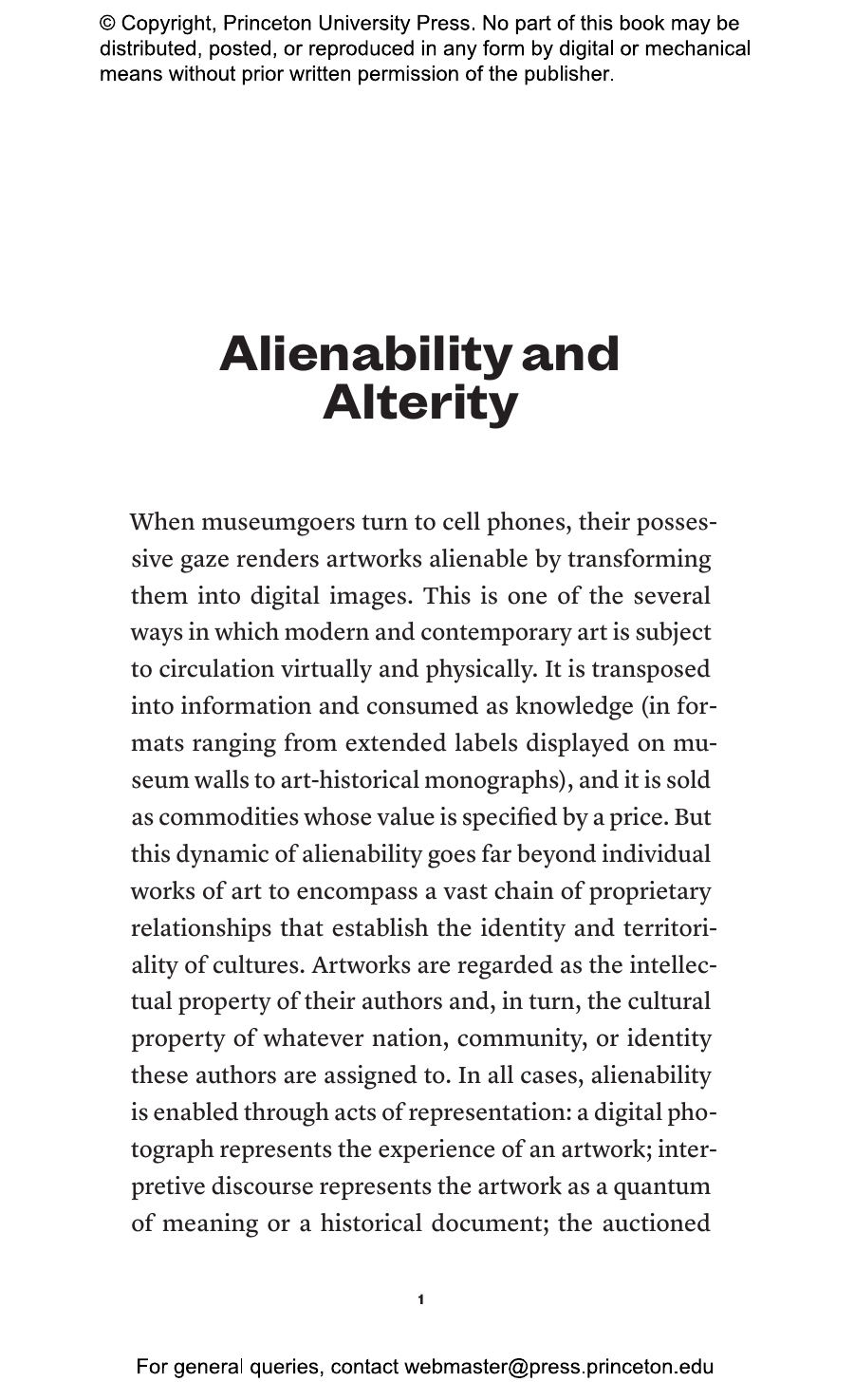 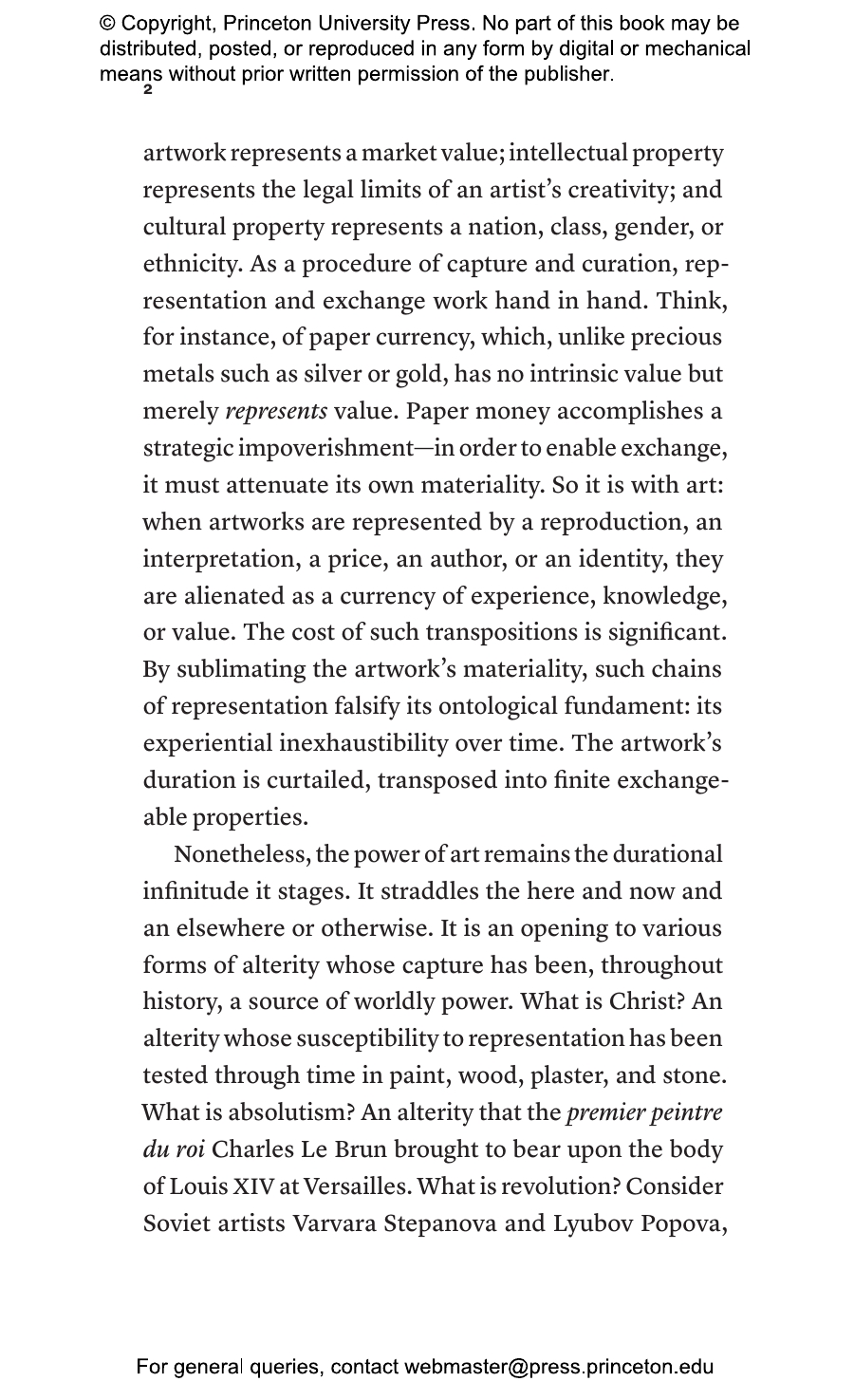 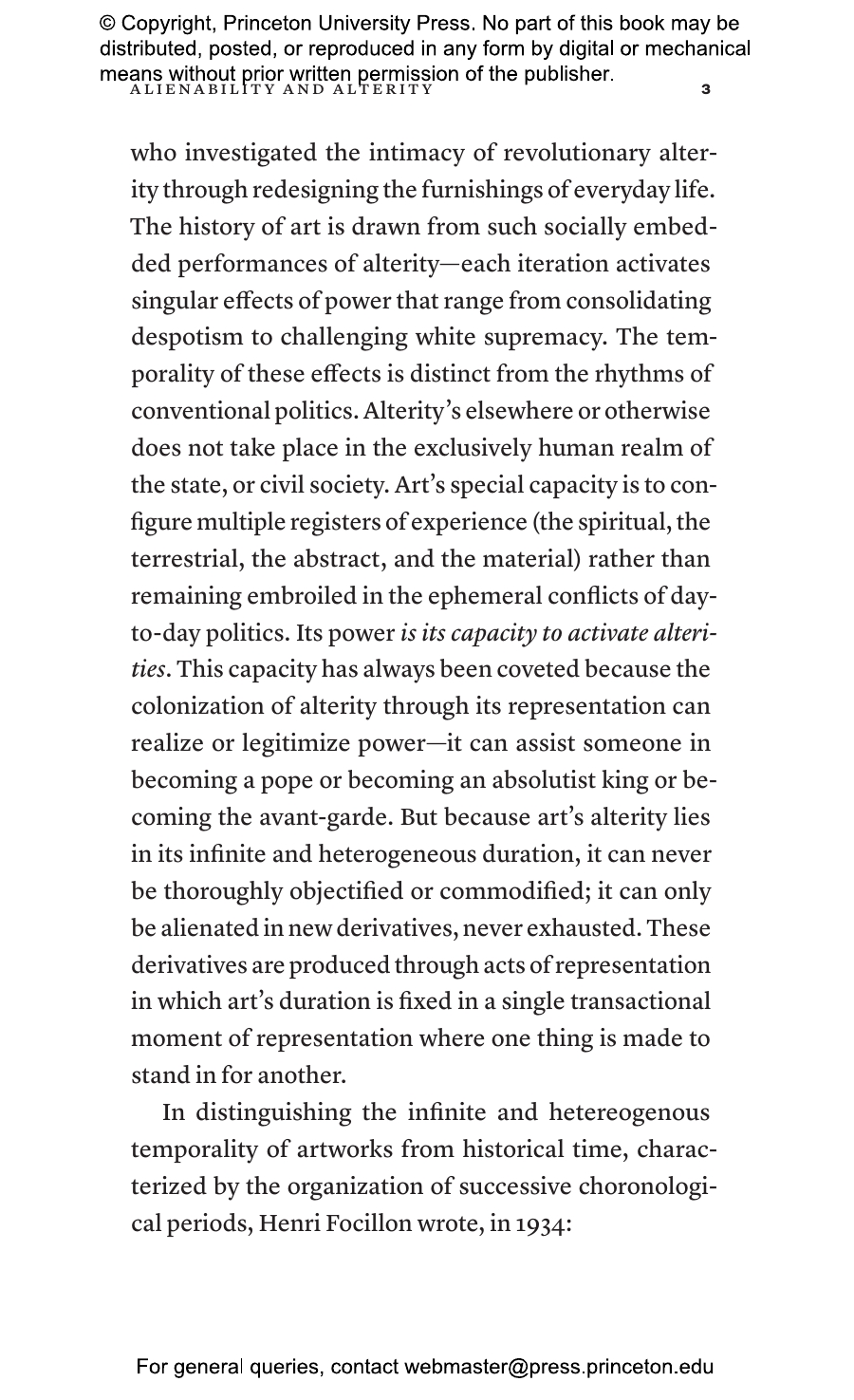 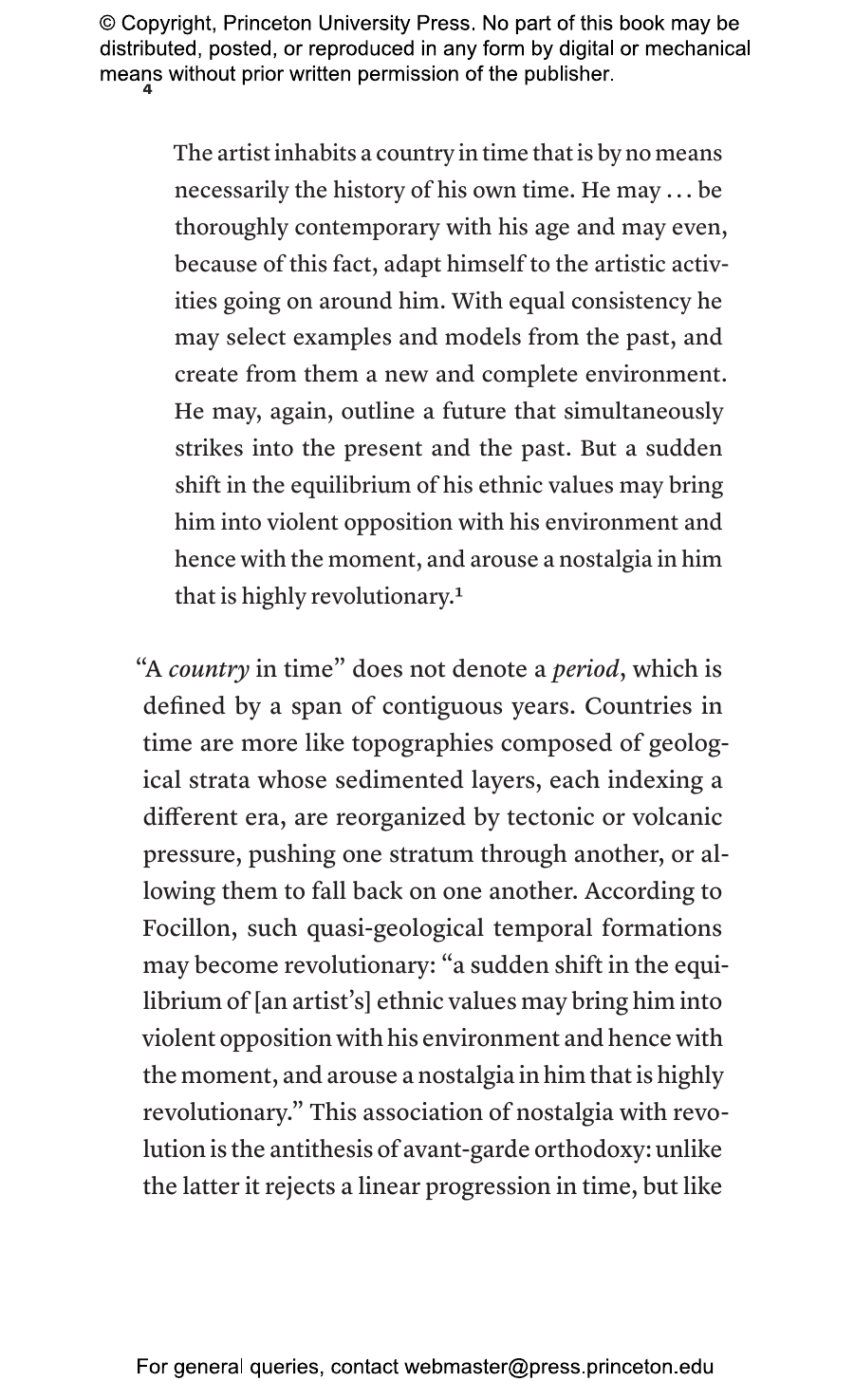 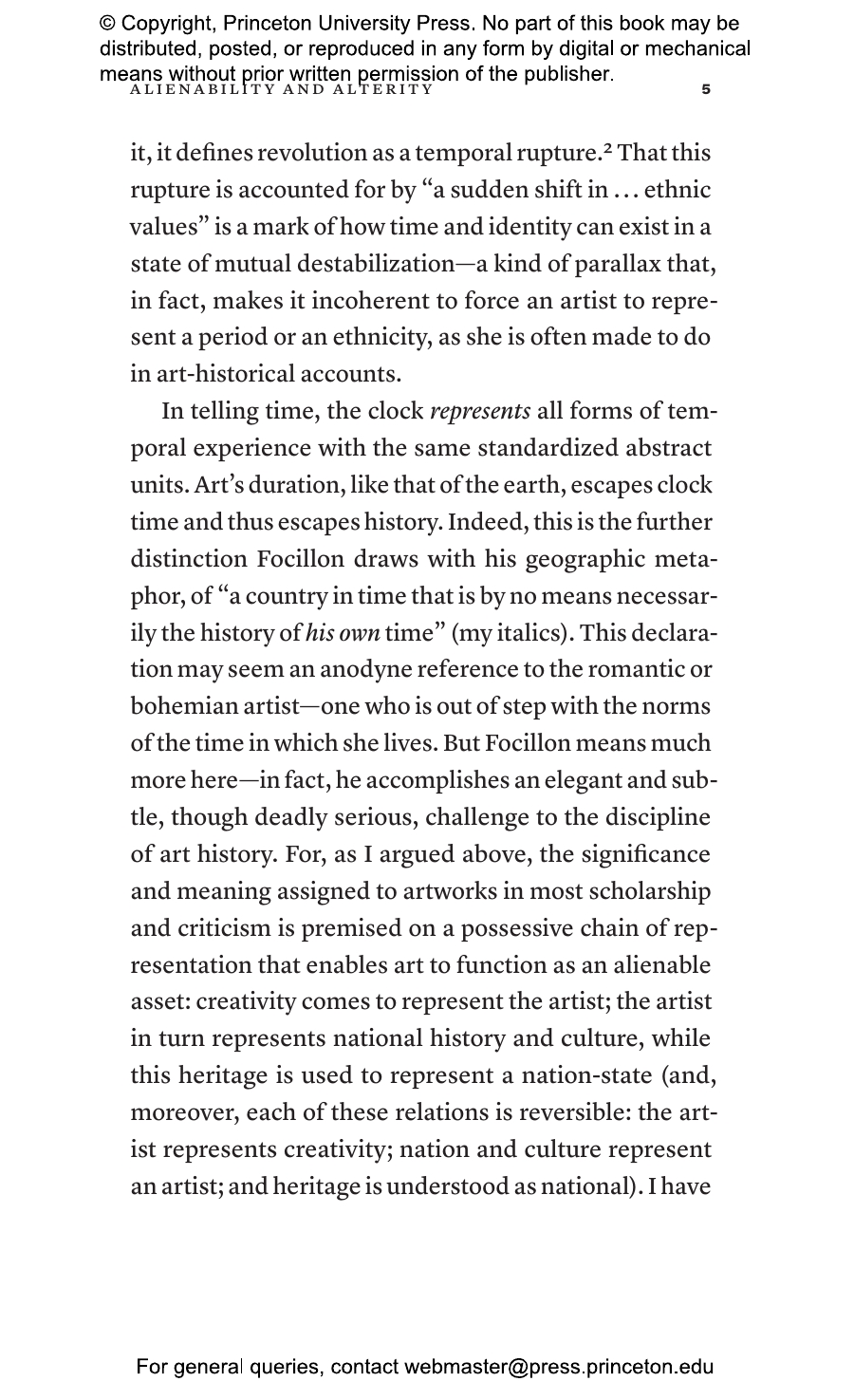 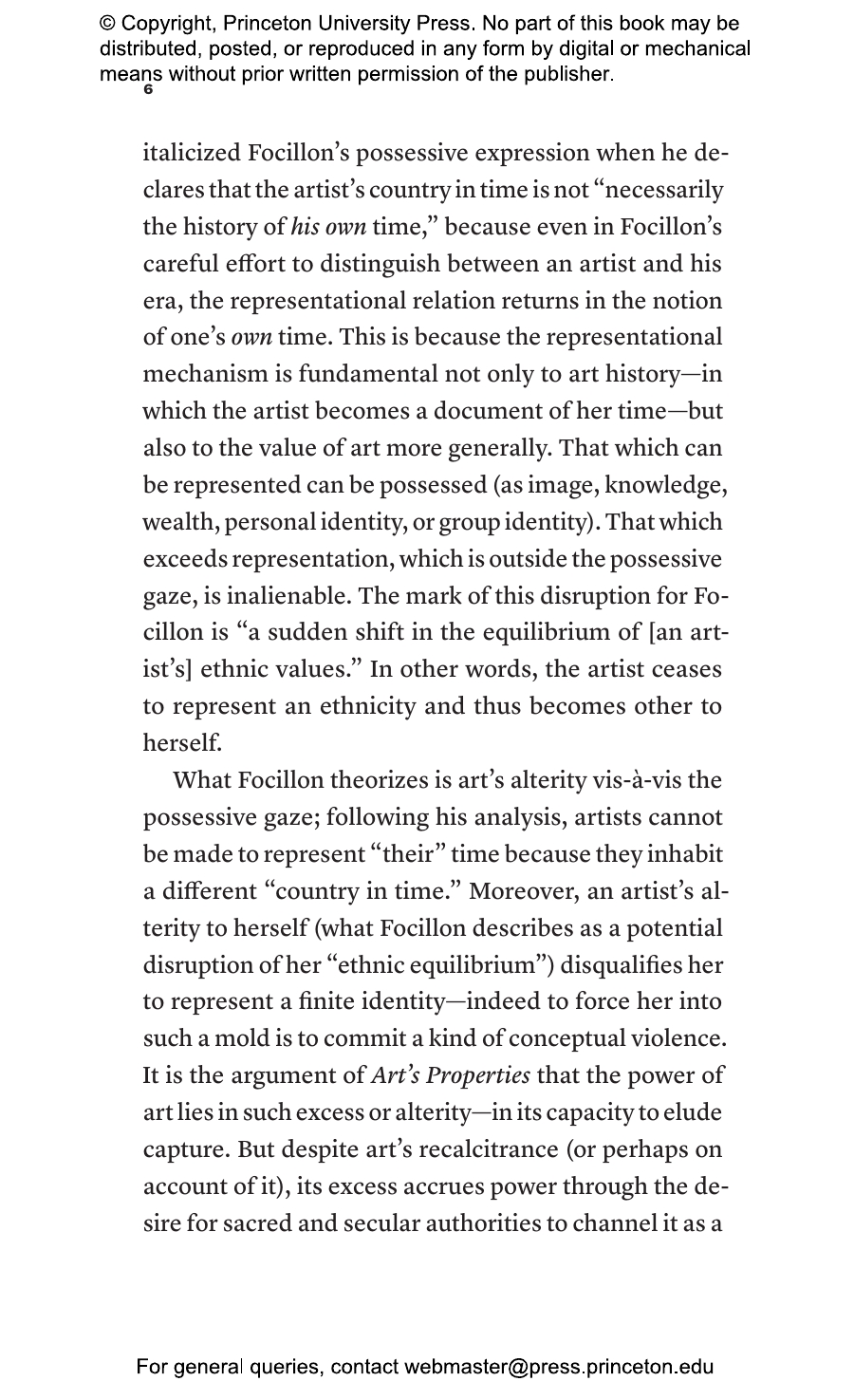 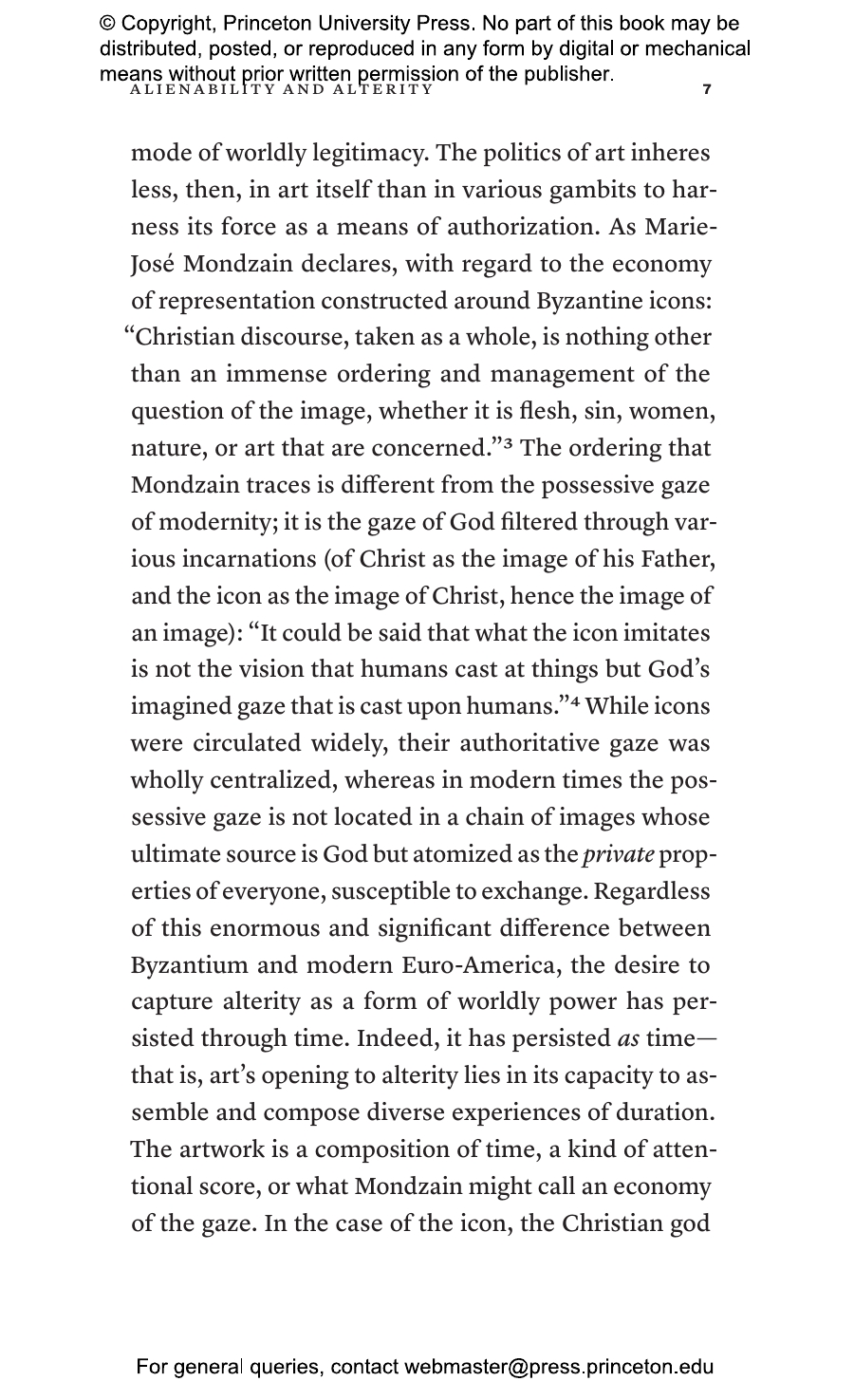 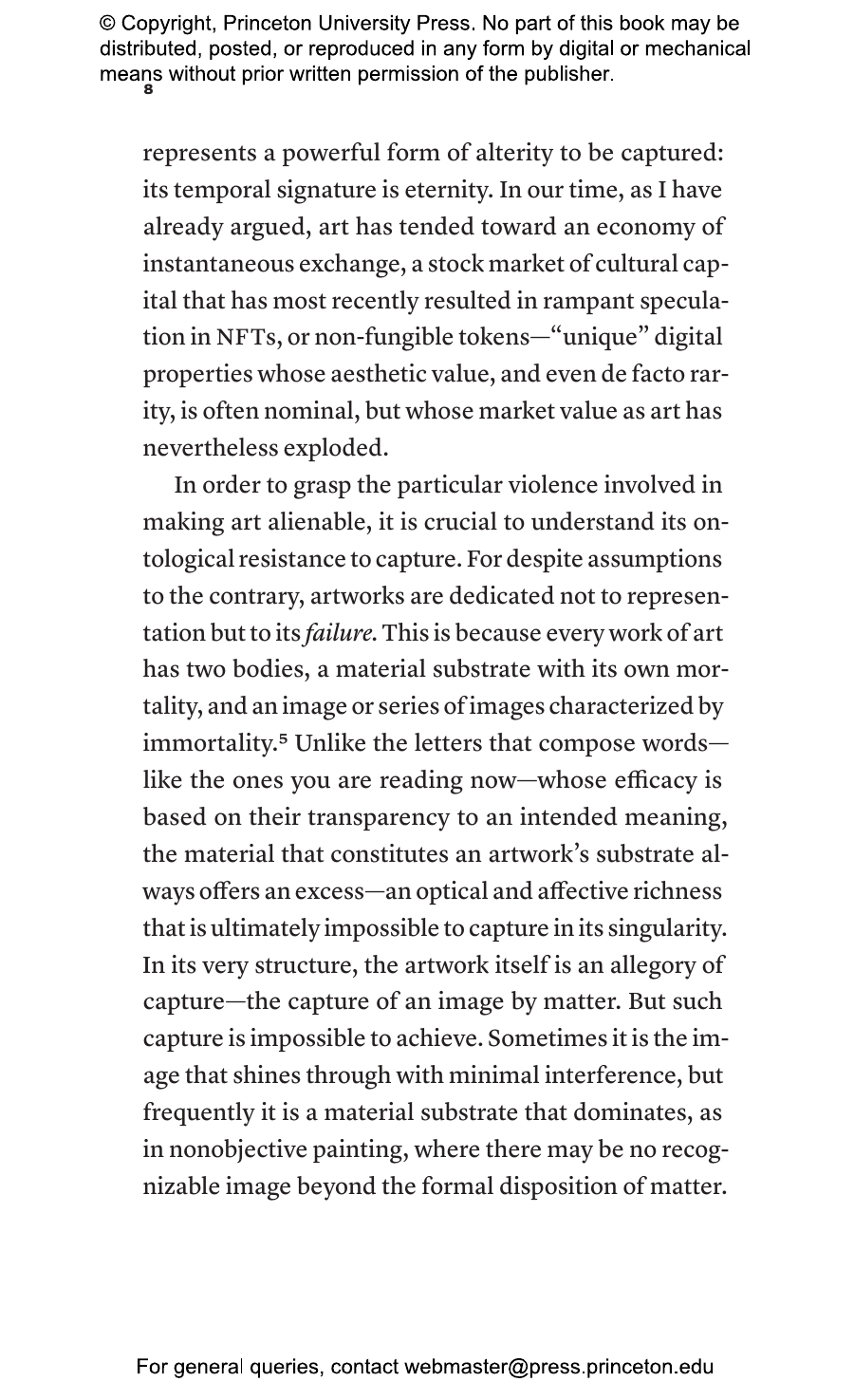 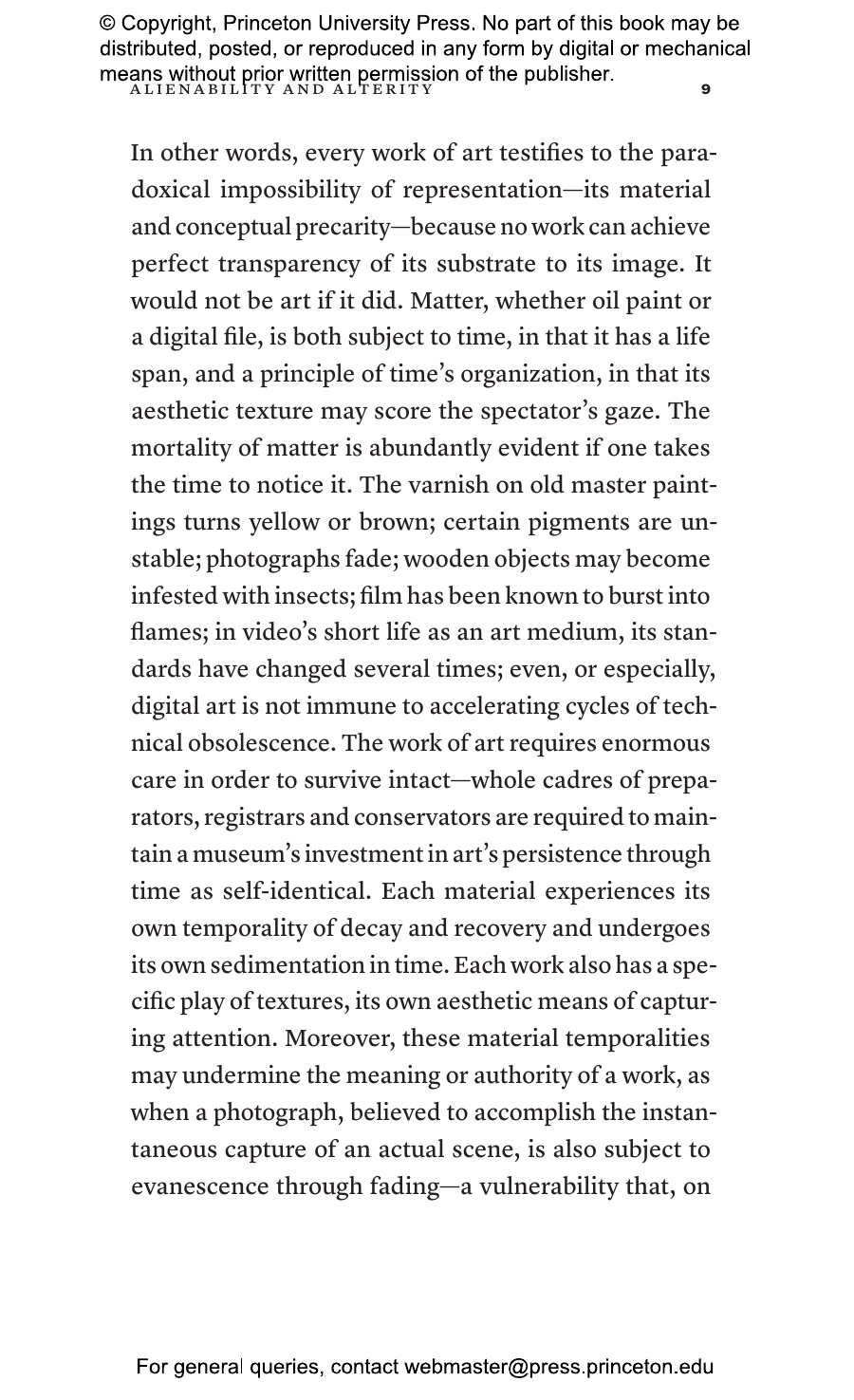 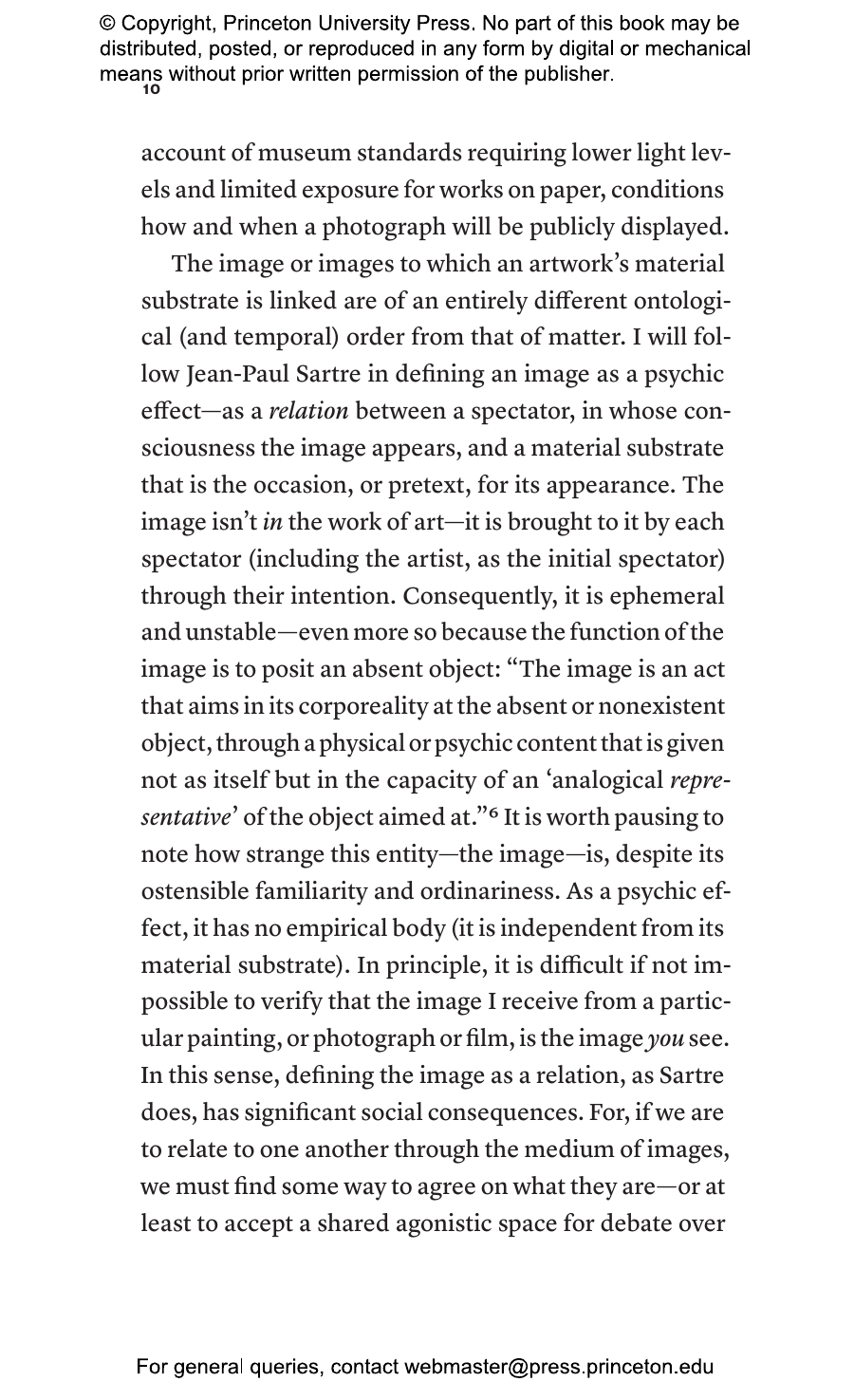 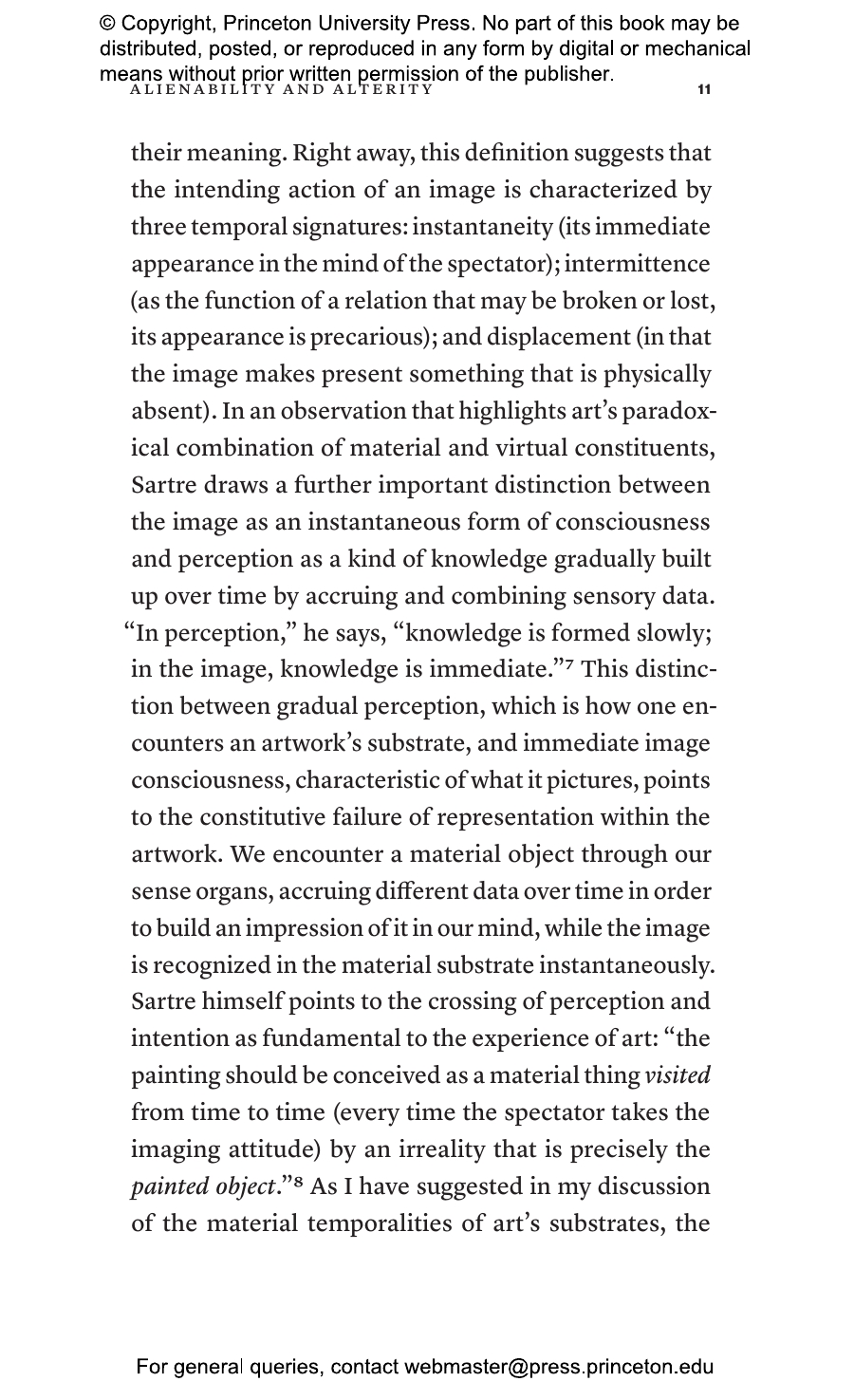 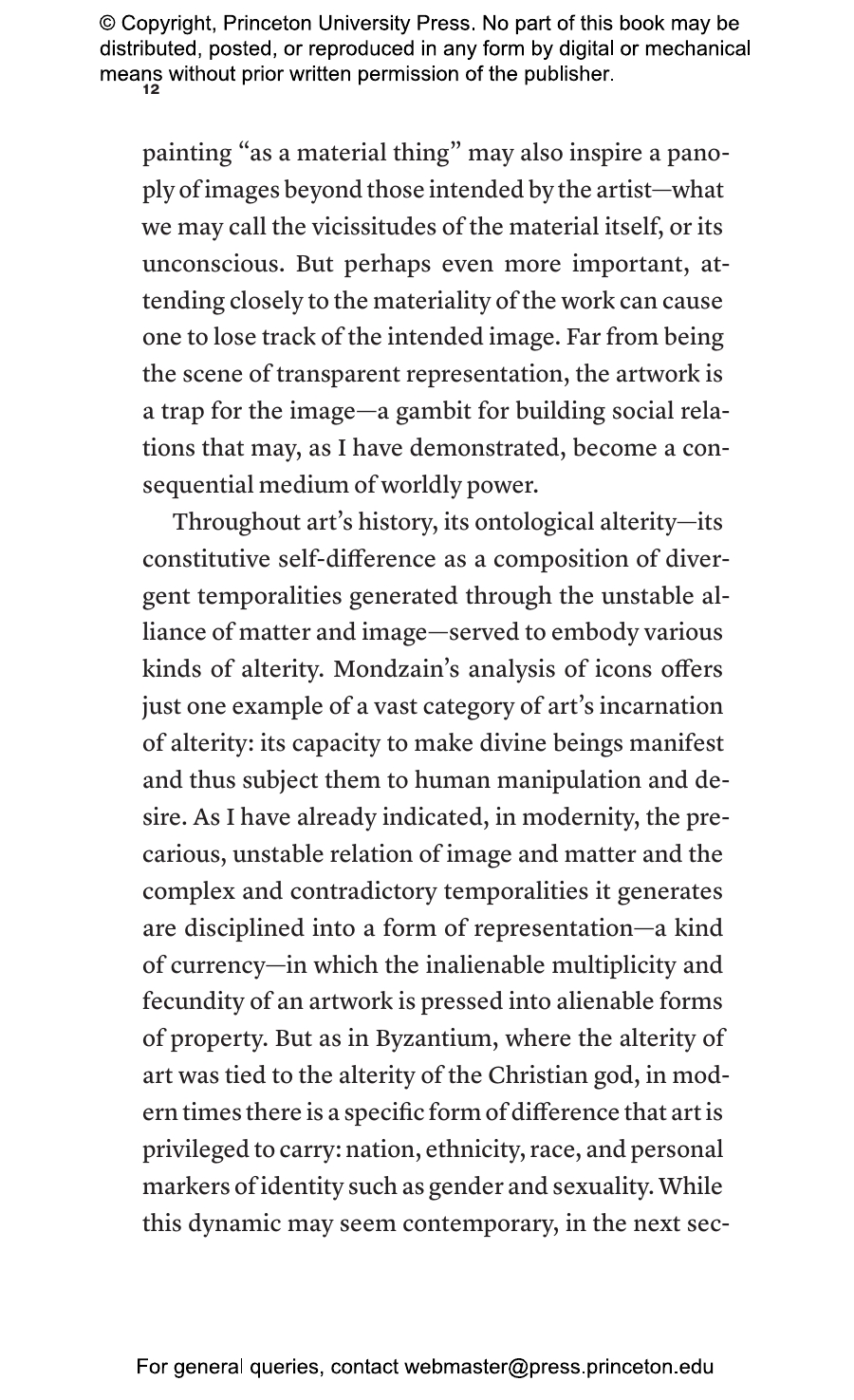 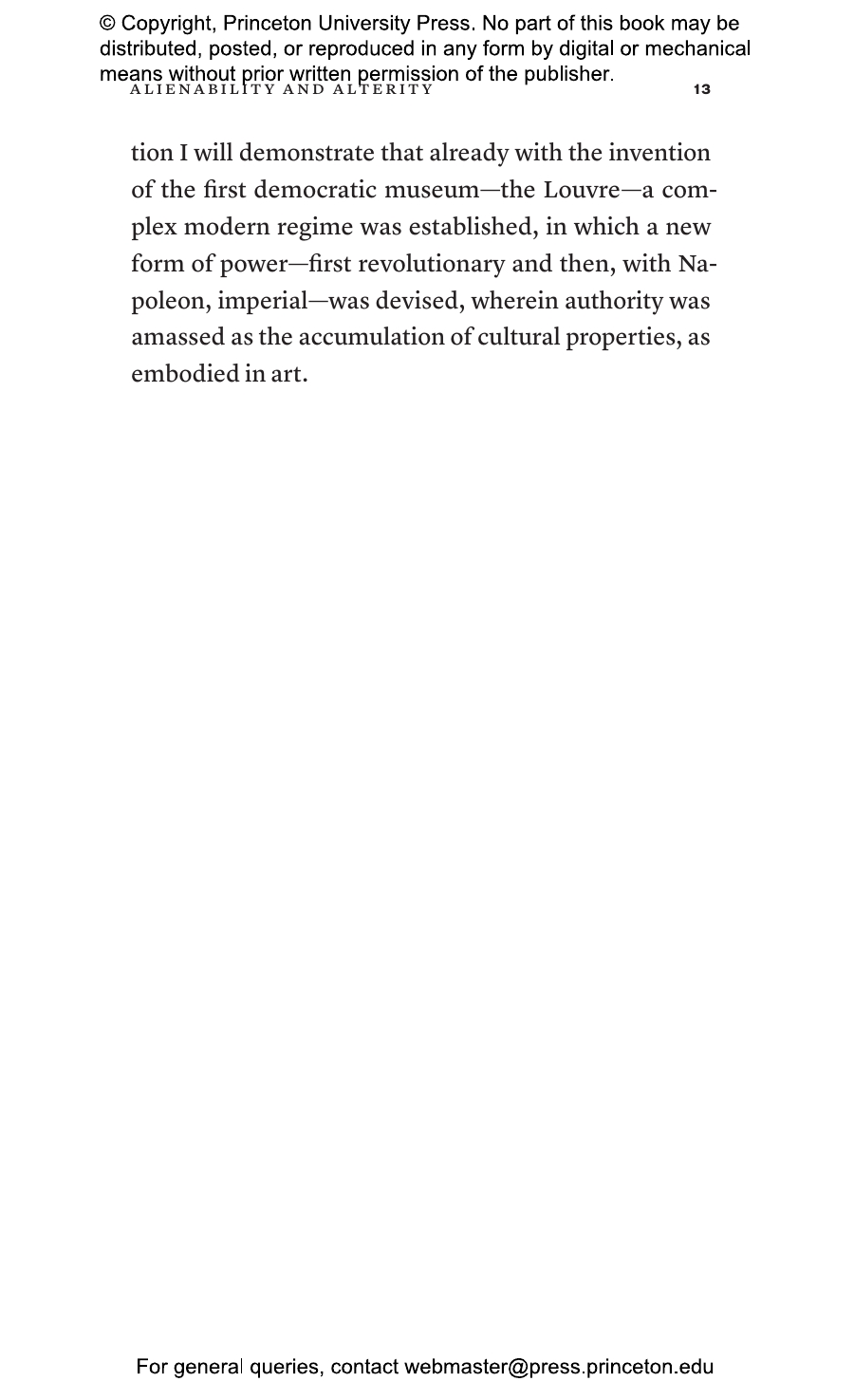 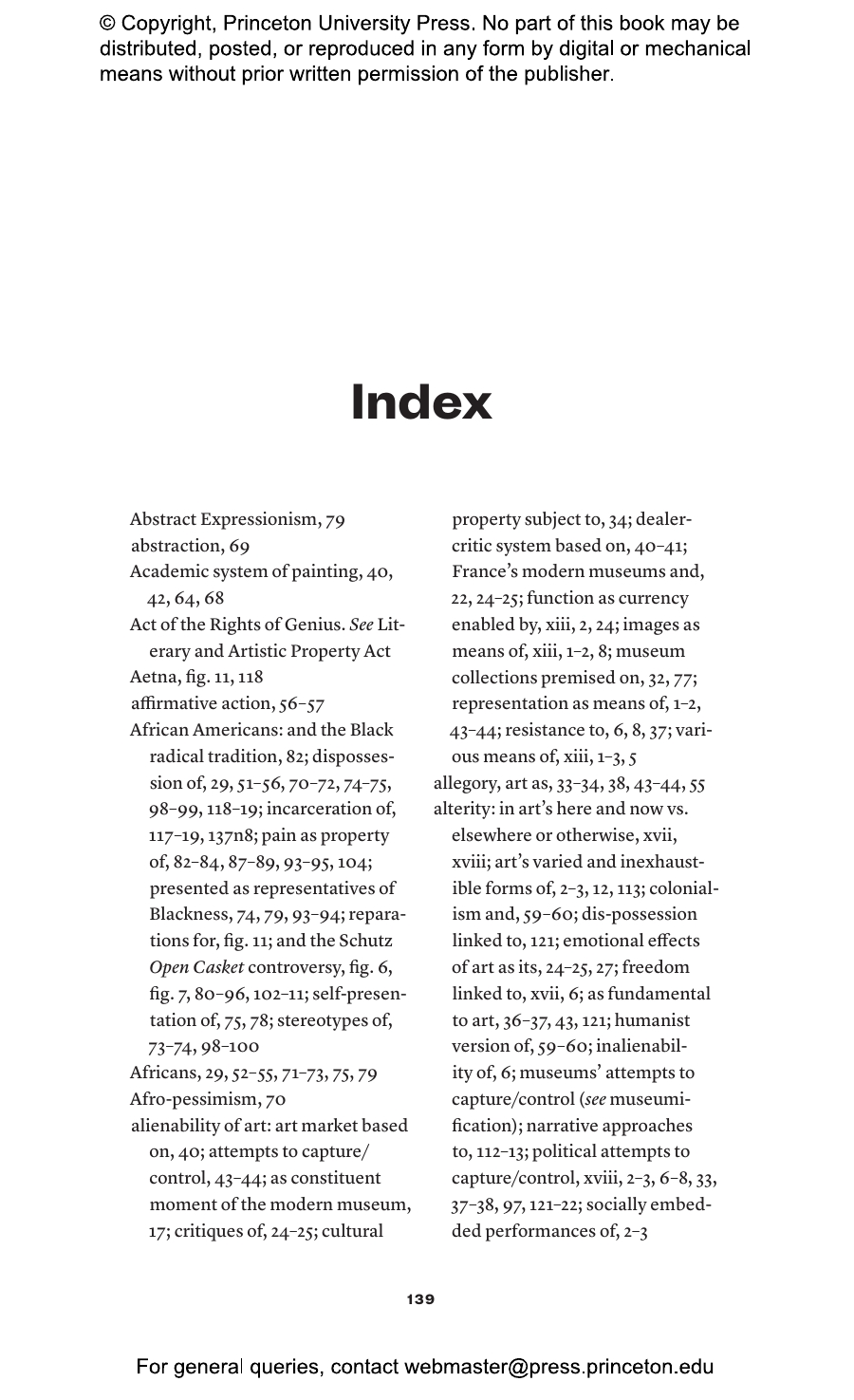 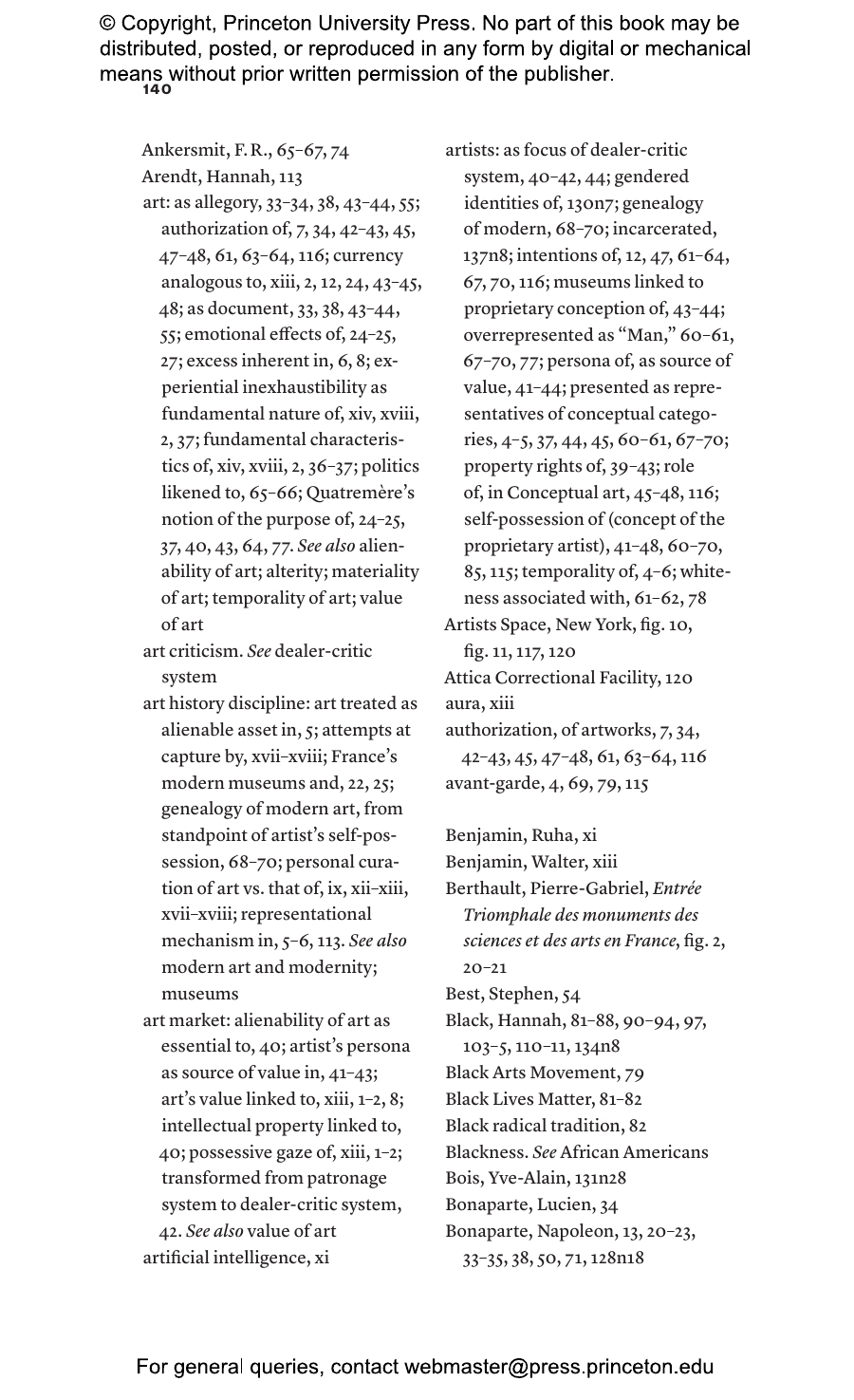 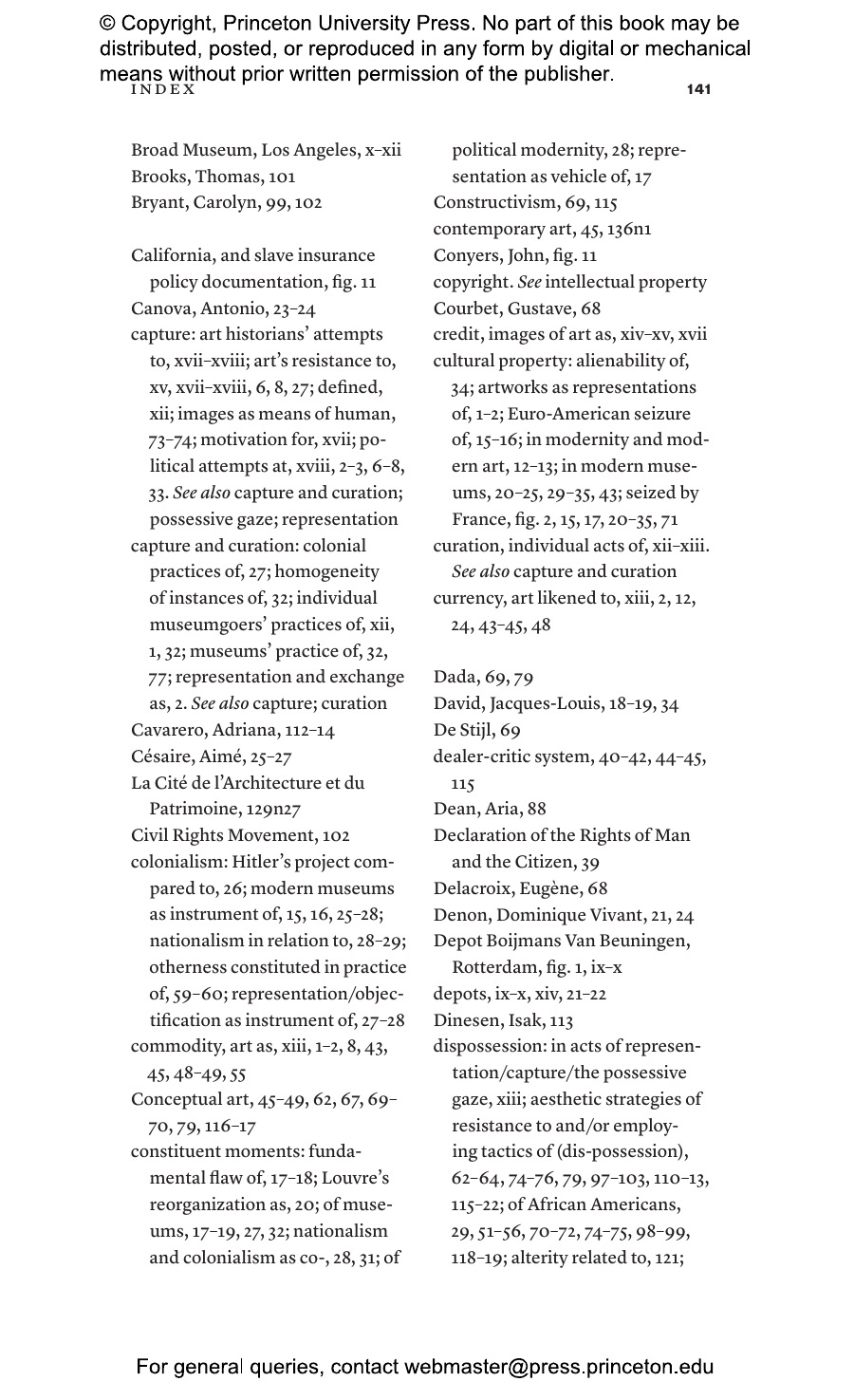 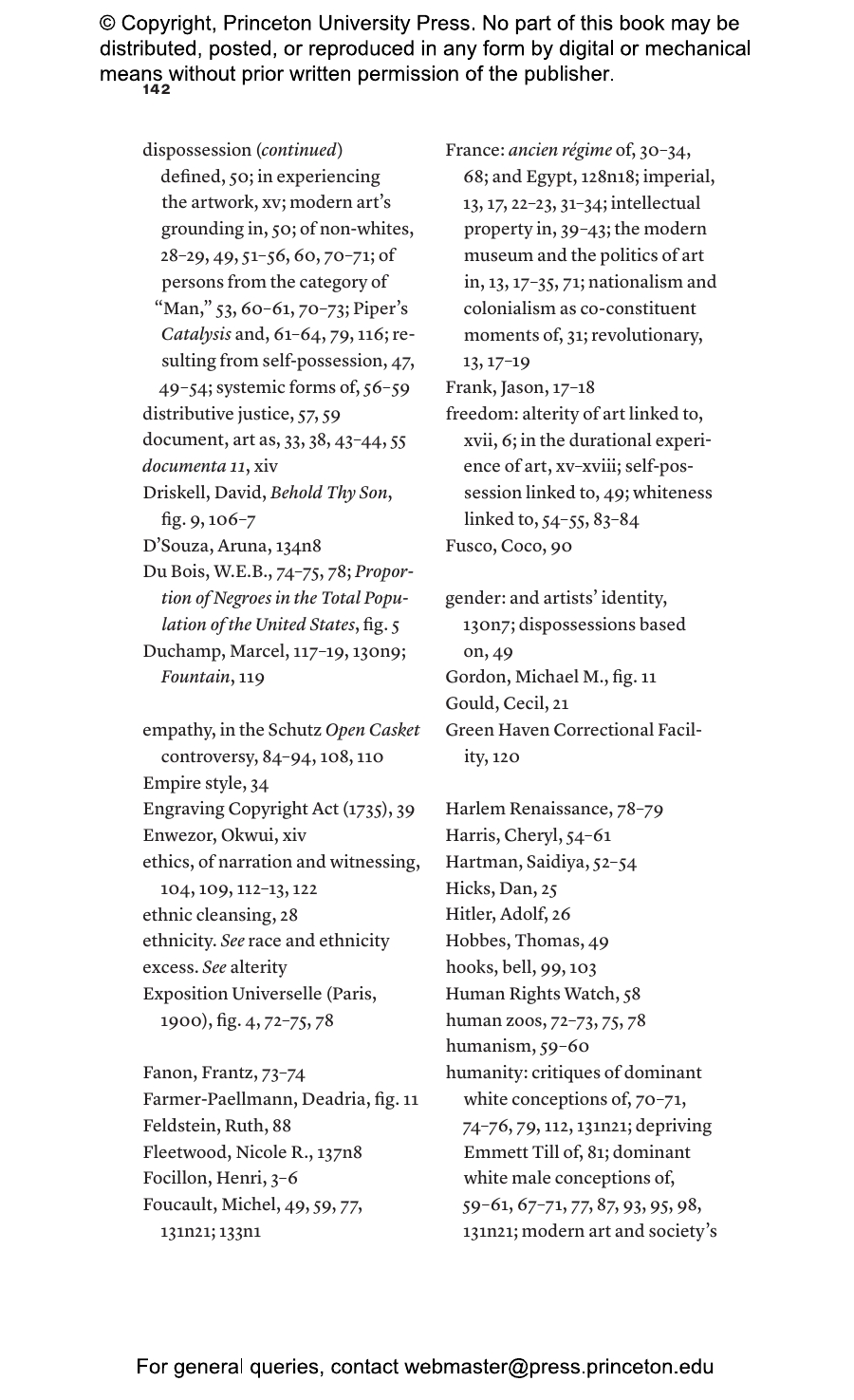 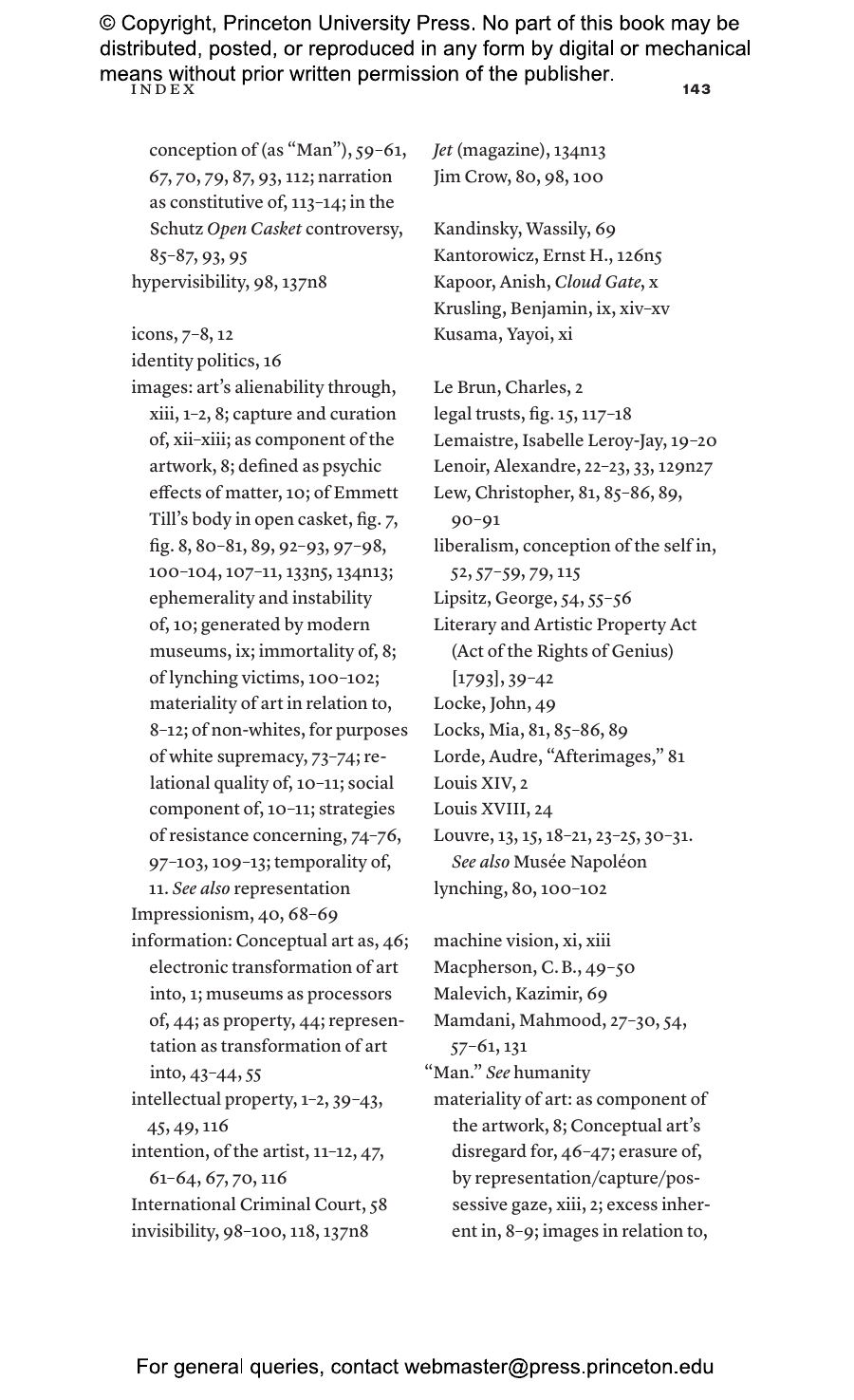 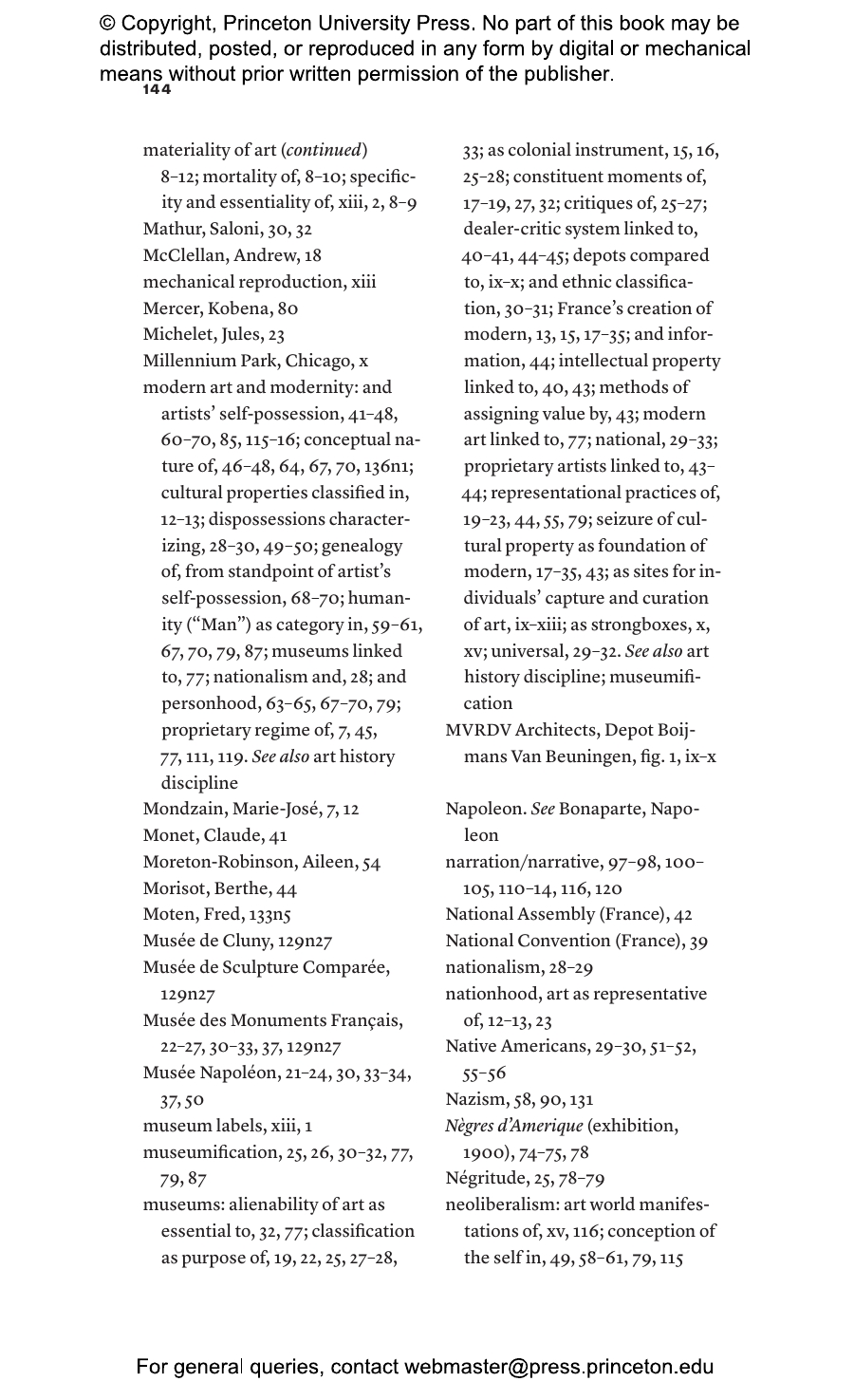 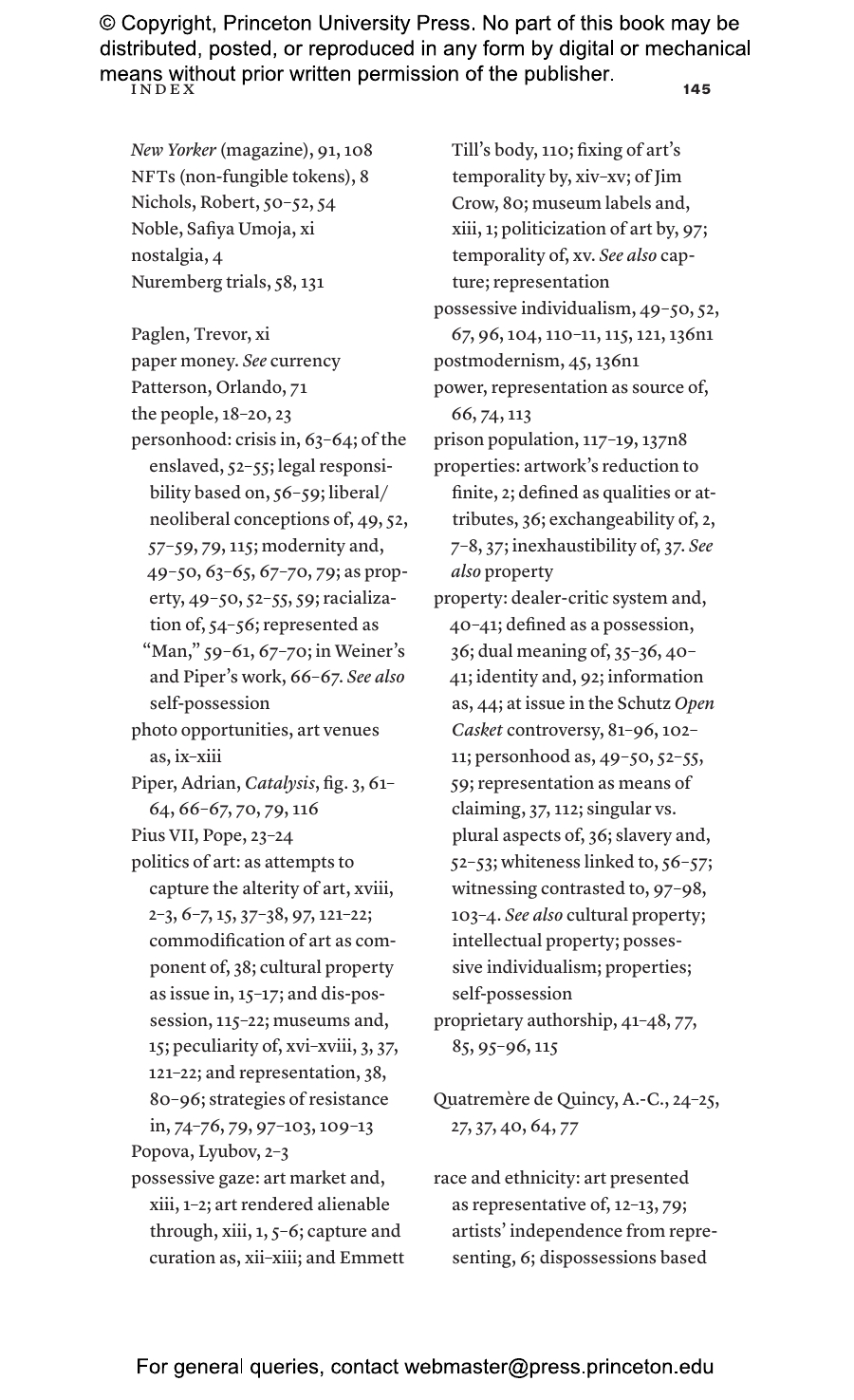 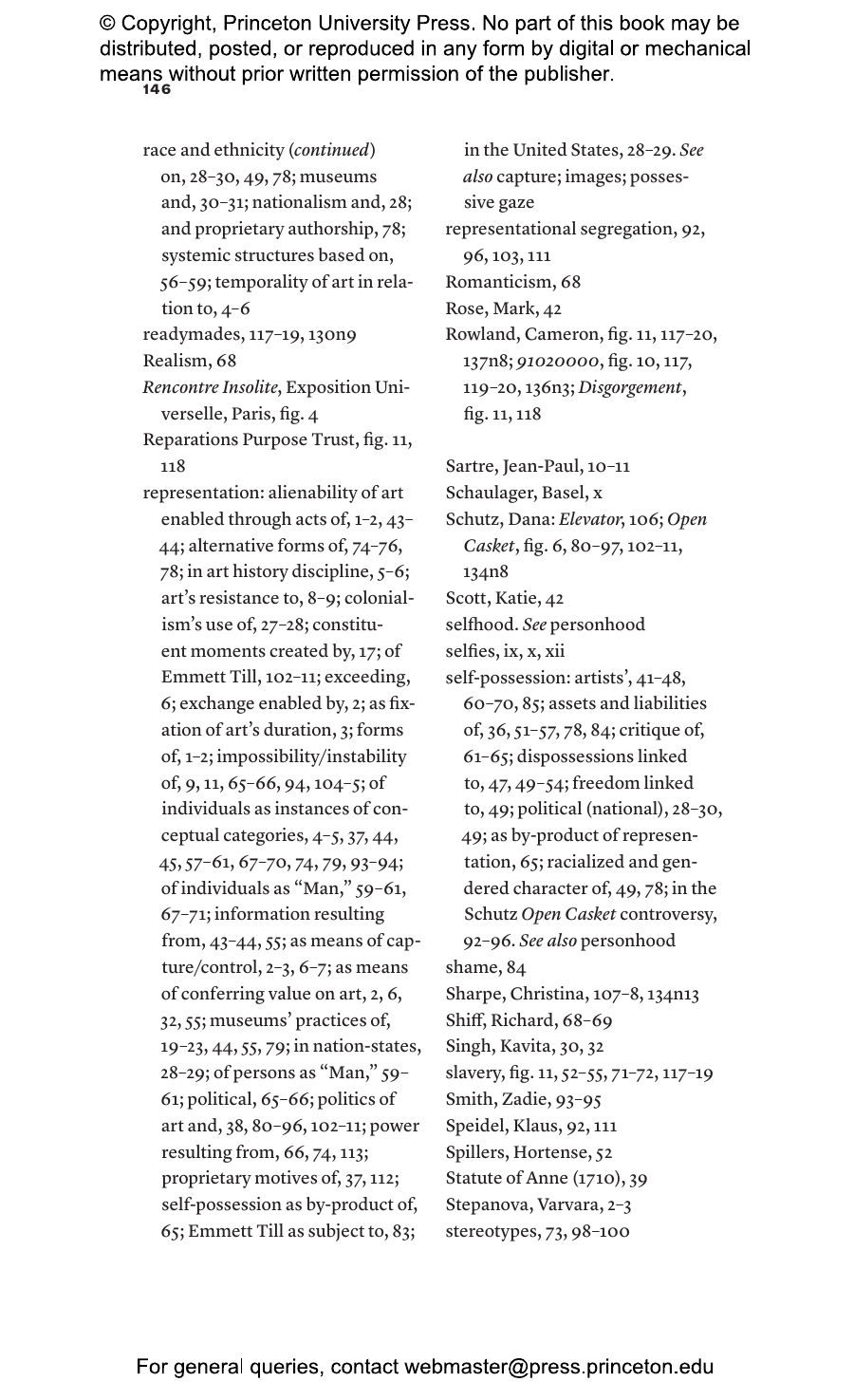 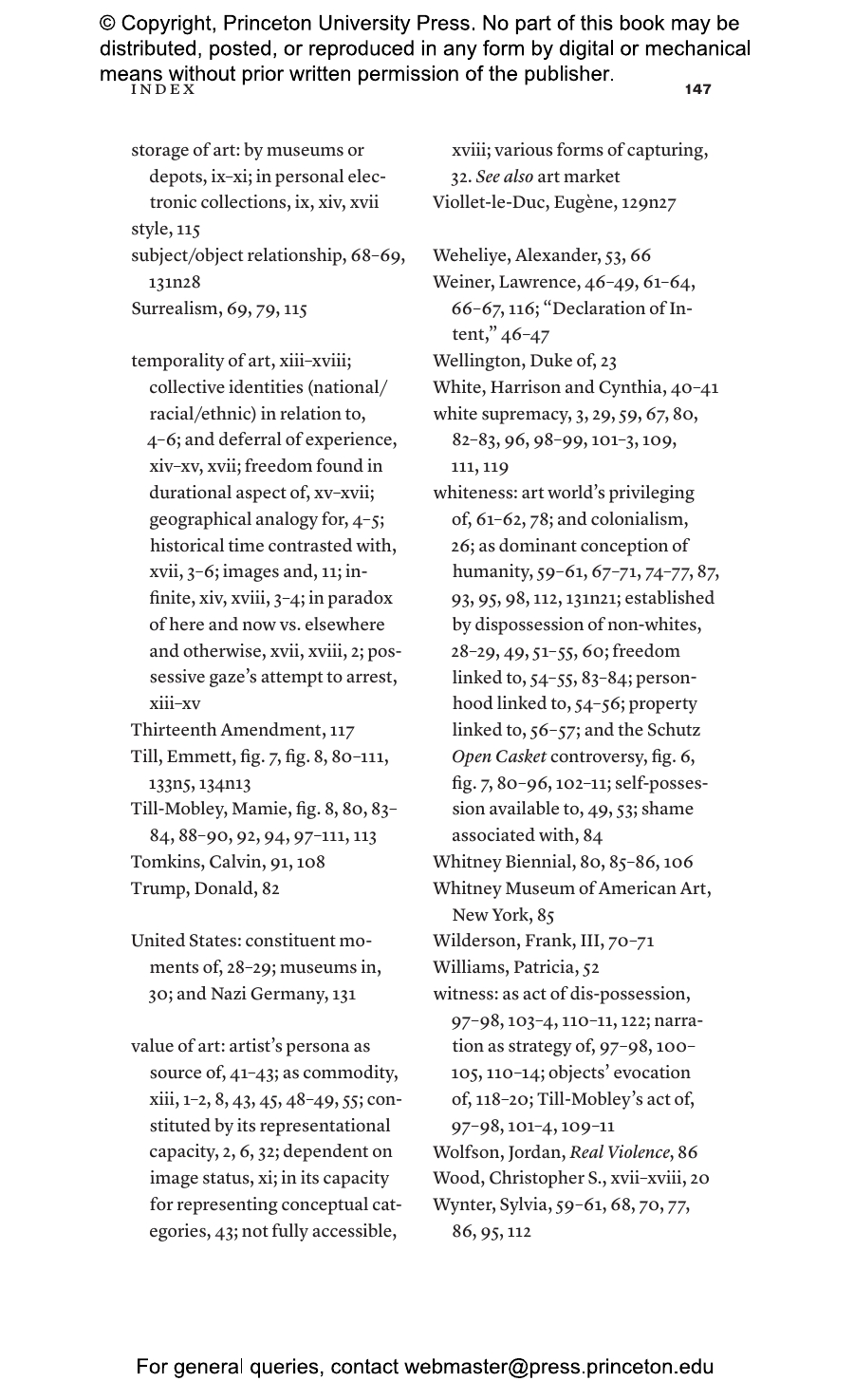 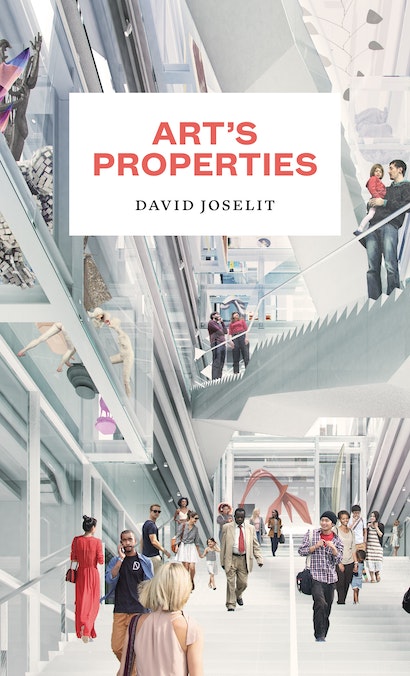 In this provocative new account, David Joselit shows how art from the nineteenth to the twenty-first centuries began to function as a commodity, while the qualities of the artist, nation, or period themselves became valuable properties. Joselit explores repatriation, explaining that this is not just a contemporary conflict between the Global South and Euro-American museums, noting that the Louvre, the first modern museum, was built on looted works and faced demands for restitution and repatriation early in its history. Joselit argues that the property values of white supremacy underlie the ideology of possessive individualism animating modern art, and he considers issues of identity and proprietary authorship.

Joselit redefines art’s politics, arguing that these pertain not to an artwork’s content or form but to the way it is “captured,” made to represent powerful interests—whether a nation, a government, or a celebrity artist collected by oligarchs. Artworks themselves are not political but occupy at once the here and now and an “elsewhere”—an alterity—that can’t ever be fully appropriated. The history of modern art, Joselit asserts, is the history of transforming this alterity into private property.

Narrating scenes from the emergence and capture of modern art—touching on a range of topics that include the Byzantine church, French copyright law, the 1900 Paris Exposition, W.E.B. Du Bois, the conceptual artist Adrian Piper, and the controversy over Dana Schutz’s painting Open Casket—Joselit argues that the meaning of art is its infinite capacity to generate experience over time.

David Joselit is professor and chair of Art, Film, and Visual Studies at Harvard University. He is the author of After Art (Princeton); Heritage and Debt: Art in Globalization, winner of the 2021 Robert Motherwell Book Award from the Dedalus Foundation; and other books. 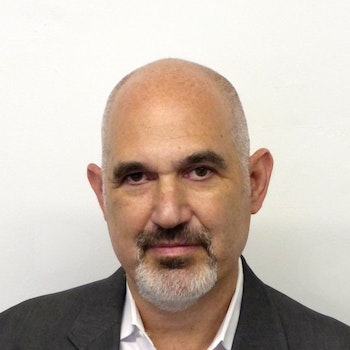 “Art’s Properties offers a highly original argument that makes a far-reaching contribution to art historical scholarship. Simultaneously erudite and urgent, it is exhilarating to read, authored by a scholar at the very top of his game. An intellectual tour de force.”—Kobena Mercer, author of Travel and See: Black Diaspora Art Practices since the 1980s

“Arts’s Properties links art, the history of capitalism, and decolonial criticism in startling and provocative ways. David Joselit has written an accomplished, incisive, jaggedly witty little bomb of a book.”—Andrei Pop, author of A Forest of Symbols: Art, Science, and Truth in the Long Nineteenth Century