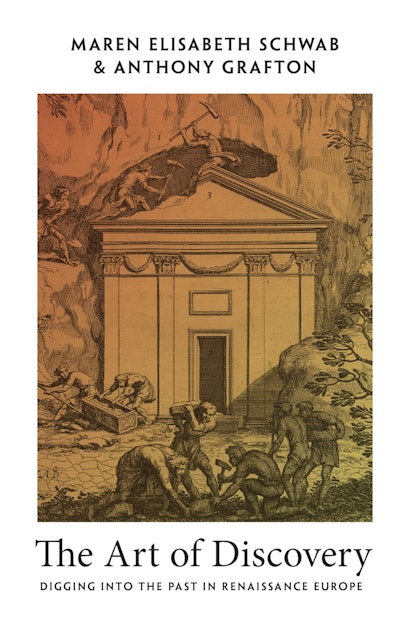 In the early fifteenth century, a casket containing the remains of the Roman historian Livy was unearthed at a Benedictine abbey in Padua. The find was greeted with the same enthusiasm as the bones of a Christian saint, and established a pattern that antiquarians would follow for centuries to come. The Art of Discovery tells the stories of the Renaissance antiquarians who turned material remains of the ancient world into sources for scholars and artists, inspirations for palaces and churches, and objects of pilgrimage and devotion.

Maren Elisabeth Schwab and Anthony Grafton bring to life some of the most spectacular finds of the age, such as Nero’s Golden House and the wooden placard that was supposedly nailed to the True Cross. They take readers into basements, caves, and cisterns, explaining how digs were undertaken and shedding light on the methods antiquarians—and the alchemists and craftspeople they consulted—used to interpret them. What emerges is not an origin story for modern archaeology or art history but rather an account of how early modern artisanal skills and technical expertise were used to create new knowledge about the past and inspire new forms of art, scholarship, and devotion in the present.

The Art of Discovery challenges the notion that Renaissance antiquarianism was strictly a secular enterprise, revealing how the rediscovery of Christian relics and the bones of martyrs helped give rise to highly interdisciplinary ways of examining and authenticating objects of all kinds.

Maren Elisabeth Schwab teaches postclassical Latin and history of knowledge at the University of Kiel. She is the author of Antike begreifen. Anthony Grafton is the Henry Putnam University Professor of History at Princeton University. His books include Inky Fingers: The Making of Books in Early Modern Europe and Information: A Historical Companion (Princeton).

“As humane as it is learned, The Art of Discovery offers a fresh encounter with the bones, words, and works of art unearthed by Renaissance antiquarians. By recovering the emotional and spiritual dimensions of these epoch-making excavations, Schwab and Grafton suggest that we have still only scratched the surface.”—Bill Sherman, director of the Warburg Institute

“Innovative and engaging. Schwab and Grafton draw on compelling case studies in sacred and secular excavations to explore how Renaissance antiquarians validated the authenticity of objects regardless of whether they were relics of a pagan or Christian past.”—Barbara Furlotti, author of Antiquities in Motion: From Excavation Sites to Renaissance Collections

“The Art of Discovery is a lively and accessible account of what it meant to unearth the past, physically and intellectually, in the fifteenth and sixteenth centuries.”—Paula Findlen, author of Possessing Nature: Museums, Collecting, and Scientific Culture in Early Modern Italy