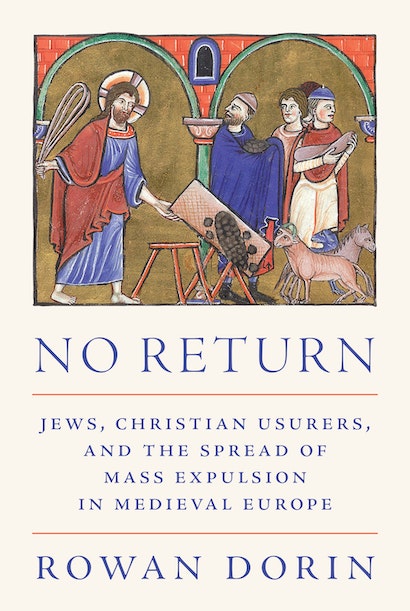 Beginning in the twelfth century, Jewish moneylenders increasingly found themselves in the crosshairs of European authorities, who denounced the evils of usury as they expelled Jews from their lands. Yet Jews were not alone in supplying coin and credit to needy borrowers. Across much of Western Europe, foreign Christians likewise engaged in professional moneylending, and they too faced repeated threats of expulsion from the communities in which they settled. No Return examines how mass expulsion became a pervasive feature of European law and politics—with tragic consequences that have reverberated down to the present.

Drawing on unpublished archival evidence ranging from fiscal ledgers and legal opinions to sermons and student notebooks, Rowan Dorin traces how an association between usury and expulsion entrenched itself in Latin Christendom from the twelfth century onward. Showing how ideas and practices of expulsion were imitated and repurposed in different contexts, he offers a provocative reconsideration of the dynamics of persecution in late medieval society.

Uncovering the protean and contagious nature of expulsion, No Return is a panoramic work of history that offers new perspectives on Jewish-Christian relations, the circulation of norms and ideas in the age before print, and the intersection of law, religion, and economic life in premodern Europe.

Rowan Dorin is Assistant Professor of History at Stanford University.

“Insightful, original, and based on an exhaustive mastery of archival sources, No Return places the history of expulsions within the landscape of emerging technologies of power that transformed European society from the twelfth century onward. This is a compelling, profound, and brilliant book.”—Teofilo F. Ruiz, author of A King Travels: Festive Traditions in Late Medieval and Early Modern Spain

“Rowan Dorin has given us an eye-opening account of how Christian and Jewish moneylenders were condemned in medieval times for taking interest and increasingly punished by expulsion—even while rulers were dependent on their services. In the conflict between money and morality, money usually came out on top. No Return is a masterpiece of legal and historical scholarship and speaks to issues of our own day.”—Natalie Zemon Davis, author of Trickster Travels: A Sixteenth-Century Muslim between Worlds

“A fascinating and elegantly researched study of an important topic. Dorin traces how the equation between usury, Jews, and expulsion came to provide a narrative that enabled the waves of expulsions in early modern Spain.”—Martha C. Howell, author of Commerce before Capitalism in Europe, 1300–1600

“A significant new way of thinking about expulsions in late medieval history. In this well-argued and erudite book, Dorin shows how the connection between usury and expulsion should be seen not only as relevant to Jewish expulsion but as part of a larger development of the period.”—Adam Shear, author of The Kuzari and the Shaping of Jewish Identity, 1167–1900