A definitive new volume of the retirement papers of Thomas Jefferson 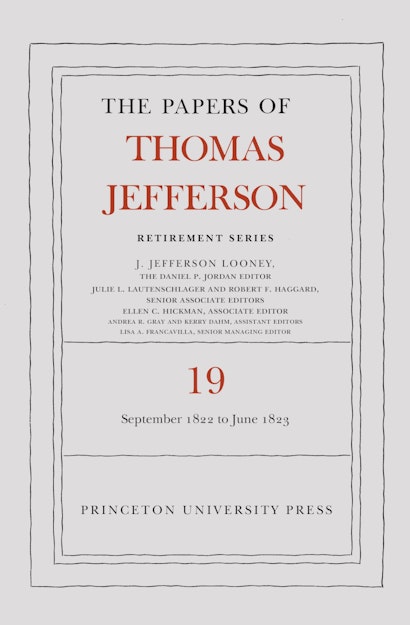 This volume’s 601 documents show Jefferson dealing with various challenges. He is injured in a fall at Monticello, and his arm is still in a sling months later when he narrowly escapes drowning during a solitary horseback ride. Jefferson obtains temporary financial relief by transferring a $20,000 debt from the Bank of the United States to the College of William and Mary.

Aided by a review of expenditures by the University of Virginia that uncovers no serious discrepancies, Jefferson and the Board of Visitors obtain a further $60,000 loan that permits construction to begin on the Rotunda.

Jefferson drafts but apparently does not send John Adams a revealing letter on religion. He exchanges long letters discussing the Supreme Court with Justice William Johnson, and he writes to friends about France’s 1823 invasion of Spain. Jefferson also helps prepare a list of recommended books for the Albemarle Library Society.

In November 1822, Jefferson’s grandson Francis Eppes marries Mary Elizabeth Randolph. He gives the newlyweds his mansion at Poplar Forest and visits it for the last time the following May. In a letter to James Monroe, Jefferson writes and then cancels “my race is near it’s term, and not nearer, I assure you, than I wish.”