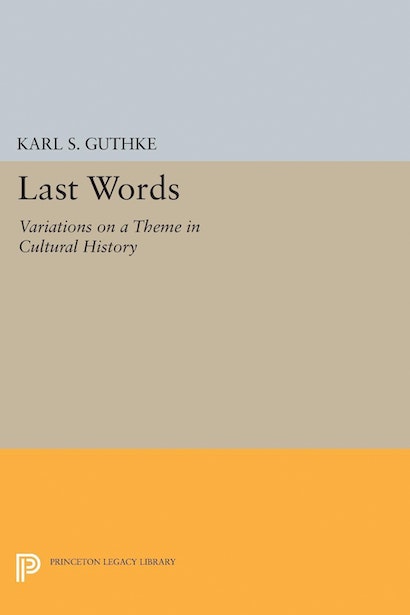 Whether Goethe actually cried “More light!” on his deathbed, or whether Conrad Hilton checked out of this world after uttering “Leave the shower curtain on the inside of the tub,” last words, regardless of authenticity, have long captured the imagination of Western society. In this playfully serious investigation based on factual accounts, anecdotes, literary works, and films, Karl Guthke explores the cultural importance of those words spoken at the border between this world and the next. The exit lines of both famous and ordinary people embody for us a sense of drama and truthfulness and reveal much about our thoughts on living and dying. Why this interest in last words? Presenting statements from such figures as Socrates, Nathan Hale, Marie Antoinette, and Oscar Wilde (“I am dying as I have lived, beyond my means”), Guthke examines our fascination in terms of our need for closure, our desire for immortality, and our attraction to the mystique of death scenes. The author considers both authentic and invented final statements as he looks at the formation of symbols and legends and their function in our culture. Last words, handed down from generation to generation like cultural heirlooms, have a good chance of surviving in our collective memory. They are shown to epitomize a life, convey a sense of irony, or play to an audience, as in the case of the assassinated Mexican revolutionary Pancho Villa, who is said to have died imploring journalists: “Don’t let it end like this. Tell them I said something.”

"Whether or not Goethe actually cried "More light!" on his deathbed ... last words, regardless of their authenticity, have long captured our imaginations. Here Karl Guthke explores the cultural importance of those words spoken at the border between this world and the next. "Last Words ... is filled with zesty farewells from just this side of the grave.... A stimulating tome shot through with grisly black humor and goosey trivia.""—Boston Phoenix Literary Supplement