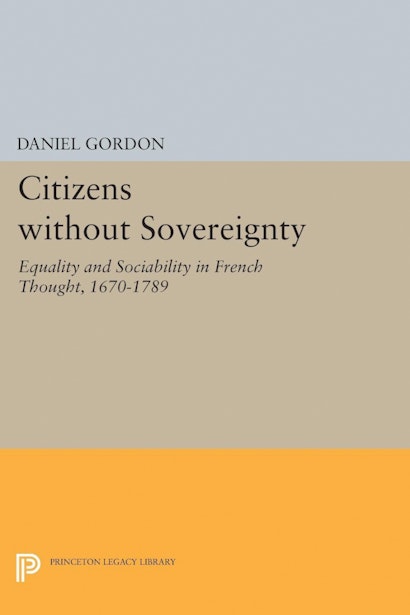 In a wide-ranging interpretation of French thought in the years 1670-1789, Daniel Gordon takes us through the literature of manners and moral philosophy, theology and political theory, universal history and economics to show how French thinkers sustained a sense of liberty and dignity within an authoritarian regime. A penetrating critique of those who exaggerate either the radicalism of the Enlightenment or the hegemony of the absolutist state, his book documents the invention of an ethos that was neither democratic nor absolutist, an ethos that idealized communication and private life. The key to this ethos was “sociability,” and Gordon offers the first detailed study of the language and ideas that gave this concept its meaning in the Old Regime. Citizens without Sovereignty provides a wealth of information about the origins and usage of key words, such as société and sociabilité, in French thought. From semantic fields of meaning, Gordon goes on to consider institutional fields of action. Focusing on the ubiquitous idea of “society” as a depoliticized sphere of equality, virtue, and aesthetic cultivation, he marks out the philosophical space that lies between the idea of democracy and the idea of the royal police state. Within this space, Gordon reveals the channels of creative action that are open to citizens without sovereignty — citizens who have no right to self-government. His work is thus a contribution to general historical sociology as well as French intellectual history.

"Gordon has written a sophisticated and original interpretation of how the idea of sociability evolved in French culture from the reign of Louis XIV to the French Revolution. . . . a work of impressive erudition."—Choice

"A major reinterpretation of the social foundations for the French Revolution . . . . It powerfully makes the case for sociability as the locus of public opinion formation in the eigtheenth century."—Orest Ranum, The Johns Hopkins University