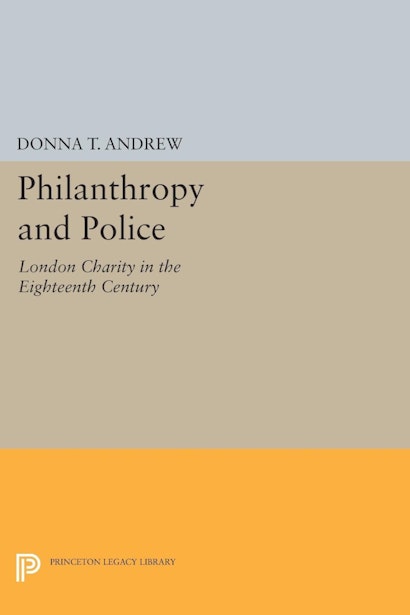 In this study of voluntary charities in eighteenth-century London, Donna Andrew reconsiders the adequacy of humanitarianism as an explanation for the wave of charitable theorizing and experimentation that characterized this period. Focusing on London, the most visible area of both destitution and social experimentation, this book examines the political as well as benevolent motives behind the great expansion of public institutions — nondenominational organizations seeking not only to relieve hardship, but to benefit the nation directly — funded and run by voluntary associations of citizens. The needs of police, the maintaining of civil order and the refining of society, were thought by many ordinary citizens to be central to the expansion of England’s role in the world and to the upholding of the country’s peace at home.

Drawing on previously unexplored and unsynthesized materials, this work reveals the interaction between charitable theorizing and practical efforts to improve the condition of the poor. The author argues that it is impossible to comprehend eighteenth-century charity without taking into account its perceived social utility, which altered as circumstances mandated. For example, the charities of the 1740s and 1750s, founded to aid in the strengthening of England’s international supremacy, lost their public support as current opinions of England’s most urgent needs changed. Creating and responding to new visions of what well-directed charities might accomplish, late-century philanthropists tried using charitable institutions to reknit what they believed was a badly damaged social fabric.