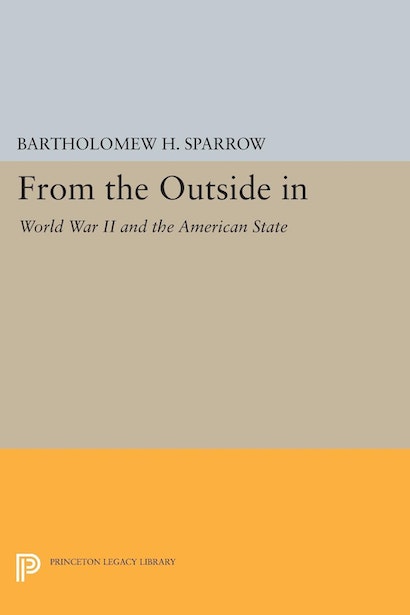 From the Outside In examines the profound impact of World War II on American government. The book argues that the wartime and immediate postwar experiences of the 1940s transformed and redirected the policies and government institutions of the New Deal. In a work that makes significant contributions to the study of U.S. politics and history, Bartholomew Sparrow proposes a new model of the state and of “state-building.” The author applies this model, which derives from the resource dependence perspective, to the historical record of four areas of public policy: social security, labor-management relations, public finance, and military procurement.

This book is the first to use recently available archival materials documenting the consequences of World War II for the programs and political agendas of the welfare state. It is also the first to apply the resource dependency perspective to the U.S. federal government as a complex organization. The book will lead readers to reevaluate the impact of international factors on American political development, to reappraise the role of the New Deal in shaping the postwar federal government, and to reconsider the application of organizational theory to American government.

From the Outside In will be of particular interest to political scientists, political sociologists, and historians. It will appeal to anyone with an interest in the comprehensive effects of the Second World War on domestic policies and U.S. government itself.

"[Sparrow] has thought hard and boldly about theoretically important issues, has devised clever comparative and historical means to appraise his arguments, and has expanded our knowledge of state processes. In doing so, he has provided a new and provocative interpretation on an important episode in the history of the U.S. state."—American Political Science Review