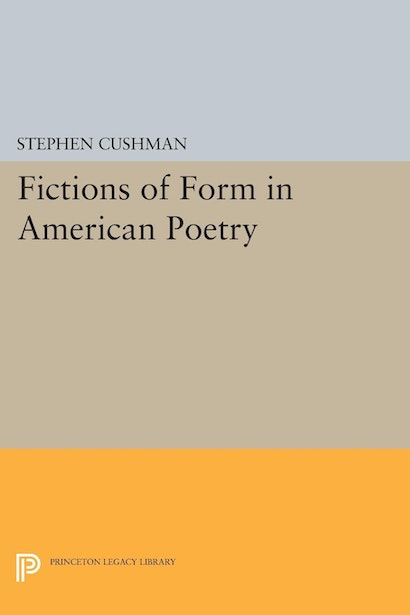 In the 1830s Alexis de Tocqueville prophesied that American writers would slight, even despise, form — that they would favor the sensational over rational order. He suggested that this attitude was linked to a distinct concept of democracy in America. Exposing the inaccuracies of such claims when applied to poetry, Stephen Cushman maintains that American poets tend to overvalue the formal aspects of their art and in turn overestimate the relationship between those formal aspects and various ideas of America. In this book Cushman examines poems and prose statements in which poets as diverse as Emily Dickinson and Ezra Pound describe their own poetic forms, and he investigates links and analogies between poets’ notions of form and their notions of “Americanness.”.

The book begins with a brief discussion of Whitman, who said, “The United States themselves are essentially the greatest poem.” Cushman takes this to mean that American poetry has succeeded in making fictions about itself which persuade its readers that its uniqueness transcends merely geographical boundaries. He explores the truth of this statement by considering the Americanness of Emily Dickinson, Ezra Pound, Elizabeth Bishop, and A. R. Ammons. He concludes that the uniqueness of American poetry lies not so much in its forms as in its formalism and in the various attitudes that formalism reveals.

"Cushman's position is that major American poets have probably overvalued the formal and perhaps fallaciously have believed that the formal aspects of their poetry reflect deep-seated views of Americanness. The book is vital, new, offering the changing poetic view of America from 1855 to the present."—Choice

"This book is valuable for its treatment of nationalism . . . , for its interpretation of individual poems, and for the striking, novel configurations among poets long thought opposed to one another. Fictions of Form in American Poetry is so well written it will delight and benefit the general reader as well as the specialist."—Willard Spiegelman, Southern Methodist University