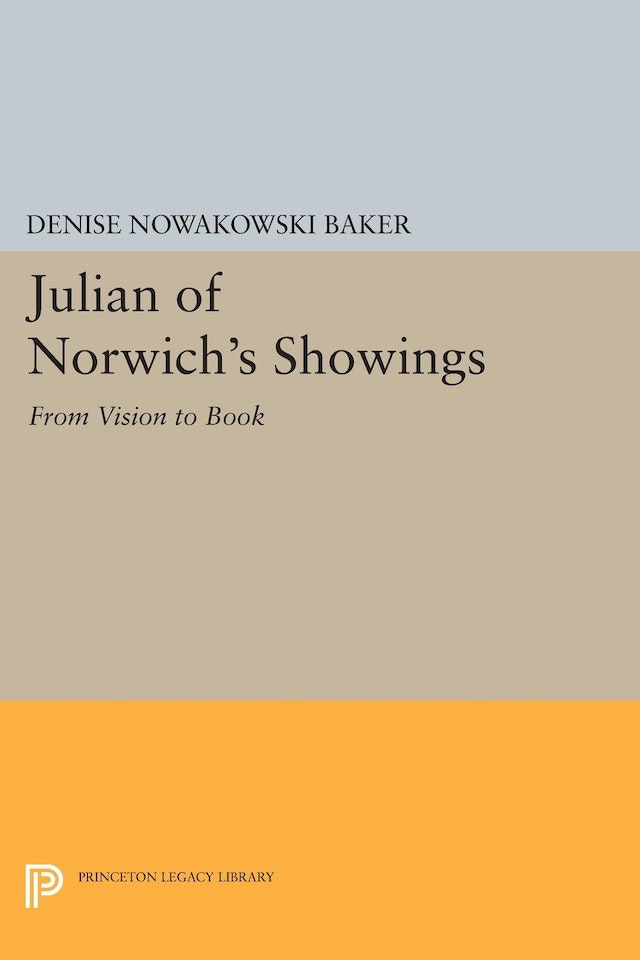 The first woman known to have written in English, the fourteenth-century mystic Julian of Norwich has inspired generations of Christians with her reflections on the “motherhood” of Jesus, and her assurance that, despite evil, “all shall be well.” In this book, Denise Baker reconsiders Julian not only as an eloquent and profound visionary but also as an evolving, sophisticated theologian of great originality. Focusing on Julian’s Book of Showings, in which the author records a series of revelations she received during a critical illness in May 1373, Baker provides the first historical assessment of Julian’s significance as a writer and thinker.

Inscribing her visionary experience in the short version of her Showings, Julian contemplated the revelations for two decades before she achieved the understanding that enabled her to complete the long text. Baker first traces the genesis of Julian’s visionary experience to the practice of affective piety, such as meditations on the life of Christ and, in the arts, a depiction of a suffering rather than triumphant Christ on the cross. Julian’s innovations become apparent in the long text. By combining late medieval theology of salvation with the mystics’ teachings on the nature of humankind, she arrives at compassionate, optimistic, and liberating conclusions regarding the presence of evil in the world, God’s attitude toward sinners, and the possibility of universal salvation. She concludes her theodicy by comparing the connections between the Trinity and humankind to familial relationships, emphasizing Jesus’ role as mother. Julian’s strategy of revisions and her artistry come under scrutiny in the final chapter of this book, as Baker demonstrates how this writer brings her readers to reenact her own struggle in understanding the revelations.

"Baker guides her reader . . . through the intricacies of medieval devotional culture and theology; every point is made very thoroughly. . . . The rigor of this historical assessment is impressive."—Julian Gibbs, The [London] Times

"Baker's book offers one of the fullest accounts so far of the theological genealogy and implications of Julian's Showings."—Karma Lochrie, American Historical Review

"An important contribution to the study of women's intellectual achievements and to the history of the body; students of medieval theology will quarry its rich insight into Julian's Showings, a work of uncommon literary force and of enduring theological significance."—Anna Harrison, Crisis

"[Baker's argument] is clear, concise, and convincing. . . . [She] has written a sensitive and balanced study, which will now become required reading for anyone interested in Julian."—Karl Tamburr, Review of English Studies

"[An] innovative and comprehensive discussion of Julian of Norwich's growth from visionary to mystical theologian. . . . Baker's own prose, like the shape of her argument, takes its cue from Julian: modest and succinct, Baker's lucid writing is intellectually rigorous and quietly appreciative of both subject and audience."—Denise L. Despres, Speculum

"This is one of the most sensible and sensitive discussions of the showings of Julian of Norwich yet to appear in book form. . . . is grounded in a clear account of the evolution and development of Julian's theological and visionary understanding in the intellectual and devotional context of her time. . . . [I]t offers a reliable, thoughtful and challenging reading of the text which will cause any reader of Julian to return to the text with new questions and fresh perceptions."—Vincent Gillespie, Aevum

"Baker has more than succeeded in coming to terms with the nature and magnitude of Julian's achievement. Her book is worthy of its subject."—Christina von Nolcken, Modern Philology

"In this, the first major assessment of her significance as a visionary and theologian, Denise Nowakowski Baker places Julian in her 14th-century context. . . . the rigour of this historical assessment is impressive."—Julian Gibbs, The Times

"[A] detailed . . . analysis of both the short and long forms of the mystic Julian of Norwich's Showings. . . . offers the general reader thoughtful insights into both the Showings and its milieu."—Publishers Weekly

"Baker's study traces the 14th century's first English woman of letters from a visionary to a theologian. . . . [Her] work will provide students and scholars a serious study of this important woman theologian."—Choice

"A welcome addition to the growing literature about women's spirituality in the Middle Ages. There is no book that offers such a close reading of the Showings in the context of medieval theology. The writing is clear and enjoyable and the opening pages are riveting."—E. Ann Matter, University of Pennsylvania

"An original and substantial [book] that will have a clear and immediate impact on how work is conducted in the field."—Nicholas Watson, University of Western Ontario