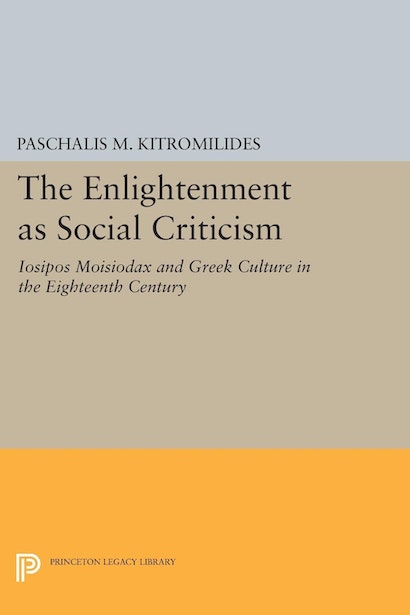 In eighteenth-century Greek culture, Iosipos Moisiodax (c.1725-1800) was a controversial figure, whose daring pronouncements in favor of cultural change embroiled him in ideological conflicts and made him a target of persecution. The first intellectual in Southeastern Europe to voice the ideas of the Enlightenment in public and without qualification, he advocated the use of vernacular Greek in education and aspired to see the backward and intellectually conservative Balkan societies remodeled along European lines. In the first modern book-length treatment of this passionate reformer, Paschalis Kitromilides skillfully retraces Moisiodax’s career and contrasts the Greek Enlightenment with the Western Enlightenment as a whole, enriching our understanding of each tradition in the process. Moisiodax’s efforts failed tragically in his own lifetime, but his vision of the Enlightenment was an impressive project of intellectual reconstruction that had a considerable effect after his death, both in the promotion of modern scientific ideas and in the enunciation of republican politics in Southeastern Europe. The methodology of literary history has traditionally dominated inquiries about his life and about the Greek Enlightenment in general, but here both man and movement are examined from an interdisciplinary perspective. Drawing on a broad range of sources and combining insights from the social sciences, cultural history, and political theory, this work reveals Moisiodax as a figure of major significance in the ideological tradition of Southeastern Europe.

"This study of one of the first Enlightenment intellectuals in the European periphery is itself a wonderfully enlightening union of biography on the one hand and social and intellectual history on the other. Kitromilides writes brilliantly about the actual experience of intellectual transmission: the high hopes with which the work begins, the fierce resistance it encounters, the human toll it exacts."—Michael Walzer, Institute for Advanced Study, Princeton