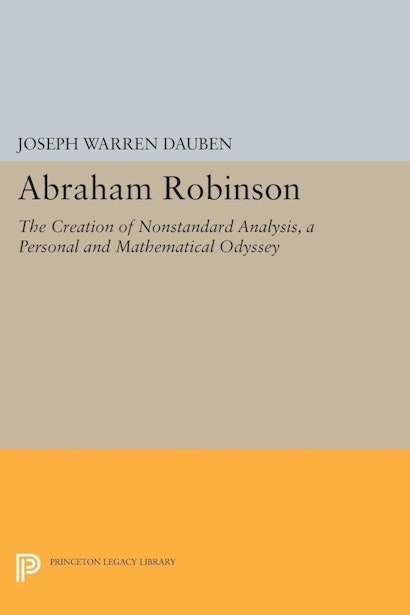 One of the most prominent mathematicians of the twentieth century, Abraham Robinson discovered and developed nonstandard analysis, a rigorous theory of infinitesimals that he used to unite mathematical logic with the larger body of historic and modern mathematics. In this first biography of Robinson, Joseph Dauben reveals the mathematician’s personal life to have been a dramatic one: developing his talents in spite of war and ethnic repression, Robinson personally confronted some of the worst political troubles of our times. With the skill and expertise familiar to readers of Dauben’s earlier works, the book combines an explanation of Robinson’s revolutionary achievements in pure and applied mathematics with a description of his odyssey from Hitler’s Germany to the United States via conflict-ridden Palestine and wartime Europe.

Robinson was born in Prussia in 1918. As a boy, he fled with his mother and brother Saul to Palestine. A decade later he narrowly escaped from Paris as the Germans invaded France. Having spent the rest of World War II in England, at the Royal Aircraft Establishment in Farnborough, he began his teaching career at the Royal College of Aeronautics. Subsequently he moved to universities in Canada, Israel, and finally the United States. A joint appointment in mathematics and philosophy at UCLA led to a position at Yale University, where Robinson served as Sterling Professor of Mathematics until his untimely death at the age of fifty-five.

"This masterpiece of scientific biography presents the eventful life and the pioneering work of a remarkable figure of twentieth-century pure and applied mathematics as well as symbolic logic. [A] well-written and most carefully researched text [that is] enlightening and delightful to read. Dauben alternates two narratives, biography and the progression of science, not omitting daily and academic life, and their background in general and cultural history, of the stations of Robinson's odyssey.... The book is bound to become an indispensable source for future historical work."—Detlef Laugwitz, Mathematical Reviews

"Robinson, who expressed a certain preference for 'glamour,' led a life that is interesting for its own sake. Dauben's account of it is engrossingly intimate."—Albert C. Lewis, Isis