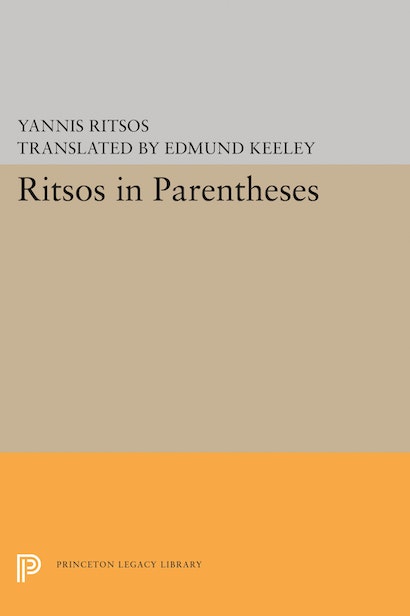 Perhaps Greece’s most important poet, Yannis Ritsos follows such eminent predecessors as Cavafy, Sikelianos, and Seferis in the dramatic and symbolic expression of a tragic sense of life. The three volumes of Ritsos’s poetry translated here—Parentheses, 1946-47, Parentheses, 1950-61, and The Distant, 1975—represent a thirty year poetic journey and a developing sensibility that link the poet’s subtler perceptions at different moments of his maturity.

In his introduction to the poems, and as an explanation of the book’s title, Edmund Keeley writes: “The two signs of the parenthesis are like cupped hands facing each other across a distance, hands that are straining to come together, to achieve a meeting that would serve to reaffirm human contact between isolated presences; but though there are obvious gestures toward closing the gap between the hands, the gestures seem inevitably to fail, and the meeting never quite occurs.”

In terms of the development of Ritsos’s poetic vision, the distance within the parenthesis is shorter in each of the two earlier volumes than in the most recent volume. There the space has become almost infinite, yet Ritsos’s powerfully evocative if stark landscape reveals a stylistic purity that is the latest mark of his greatness.