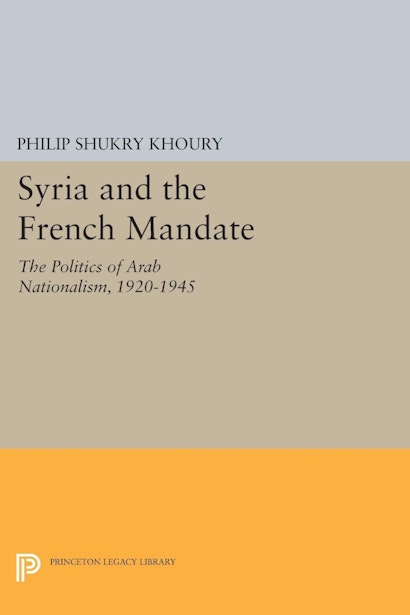 Why did Syrian political life continue to be dominated by a particular urban elite even after the dramatic changes following the end of four hundred years of Ottoman rule and the imposition of French control? Philip Khoury’s comprehensive work discusses this and other questions in the framework of two related conflicts — one between France and the Syrian nationalists, and the other between liberal and radical nationalism.

". . . this is an extremely readable book, and in fact one which is often hard to put down, so well written is it, so beautifully produced, and so coherent in its presentation. . . . Basing his study on an exhaustive array of sources, from the French, British, and Syrian archives to conversations with virtually every surviving prominent participant in the events described, Philip Khoury has given us what will undoubtedly henceforth be the standard work on the subject. Packed with information, all of it clearly presented and much in the form of fascinating biographical nuggets, this book will be indispensable to students of Syria, of modern Arab history and politics, and of Arab nationalism, for the Mandatory period, as well as earlier and later ones."—Rashid I. Khalidi, The Middle East Journal

"[Khoury] has produced a formidable piece of scholarship which, as well as analyzing new data on the period, surely cannot fail to stimulate many ideas for future research. The product of years of careful work, this is a book to feast on. . . . With the author exercising such an able grasp of his subject, not to mention an obviously deep affection, this work is thoroughly recommended."—Philip Robins, MESA Bulletin