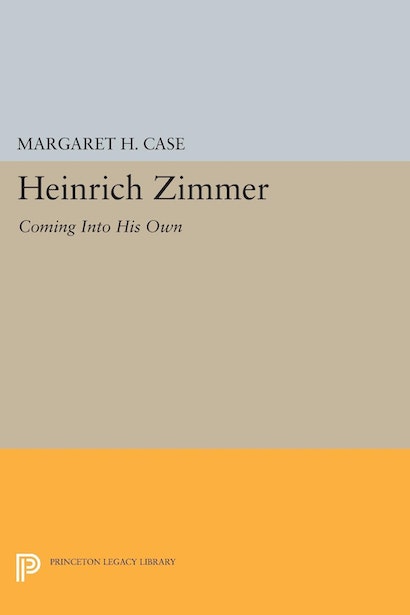 Heinrich Zimmer (1890-1943) is best known in the English-speaking world for the four posthumous books edited by Joseph Campbell and published in the Bollingen Series: Myths and Symbols in Indian Art and Civilization, Philosophies of India, The Art of Indian Asia, and The King and the Corpse. These works have inspired several generations of students of Indian religion and culture.

All the papers in this volume testify to Zimmer’s originality and to his rightful place in that small group of great scholars who were part of the first generation to confront the end of European empires in India and the rest of Asia. In her introduction, Margaret Case contrasts Zimmer’s approach to India with that of Jung. There follow two recollections of Zimmer, one by his daughter Maya Rauch, the other by a close friend and supporter in Germany, Herbert Nette. Then William McGuire describes Zimmer’s connections with Mary and Paul Mellon and with the Jungian circles in Switzerland and New York. A brief talk by Zimmer, previously unpublished, describes his admiration for Jung. Wendy Doniger picks up the question of Zimmer’s intellectual legacy, especially in the light of Campbell’s editorial work on his English publications. Gerald Chapple raises another question about how his influence was felt: the division between what is known of his work in the German-and the English-speaking worlds. Kenneth Zysk then summarizes and analyzes his contribution to Western knowledge of Hindu medicine; Matthew Kapstein evaluates his place in the West’s appreciation of Indian philosophy; and Mary Linda discusses his contributions to the study of Indian art in the light of A. K. Coomaraswamy’s work and more recent research.

"Heinrich Zimmer (1890-1943) was a German Indologist and comparative mythologist whose enthusiasm for his subject helped Westerners see Indian thought not as something exotic but as another expression of the universal aspirations of the human spirit.... These essays make it easier to go beyond the popular level and see why Zimmer stressed what he did."—Asian Folklore Studies